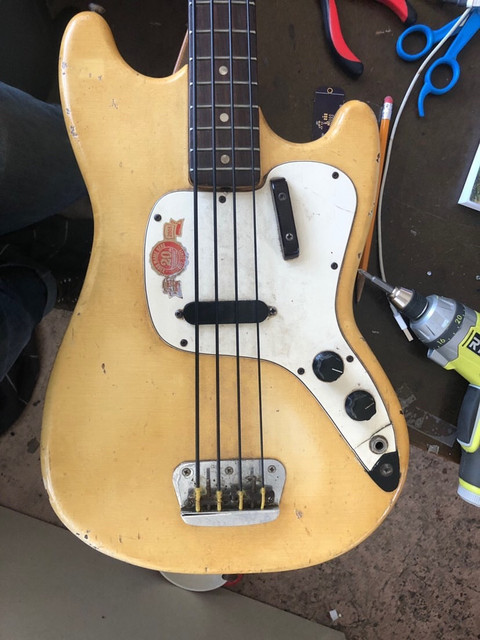 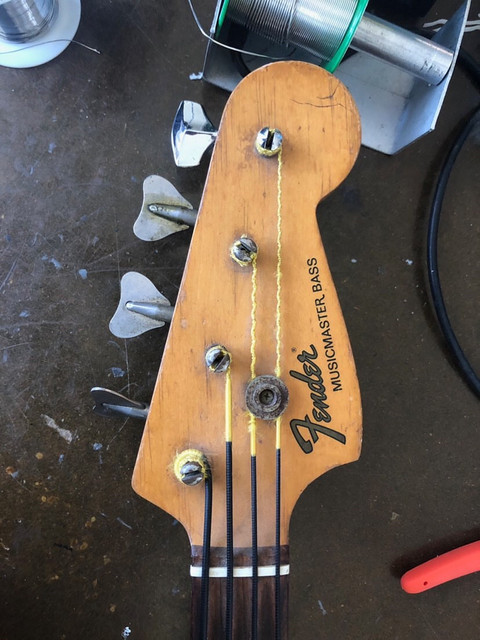 weird day... by complete chance i actually played a 1974 in a shop first thing this morning(my first time actually holding one of these in person), and was blown away, but turned off by the price(1100 for a cleaner example of the mmb)... through a series of unexpected and happy coincidences, i mentioned it to an acquaintance, and he happened to have one he had been pondering selling. ended up with this one for 650 and i’m even more into it than the minty one i started the day on.

still feels kinda surreal as this bass has been an idea in my head for a long time and it all kinda materialized in an instant.

the wear on this thing is just spectacular. the neck finish is at that point that it’s hard to tell raw from lacquered wood, just kinda worn into the maple. insane checking and yellowing, some of the most heavily yellowed olympic i’ve come across... just stunning. can’t wait to peek under the guard.

removed the sticker and some nasty residues, cleaned up the finish a bit, etc. swapped the tapes for rounds... sounds and feels so killer. my plan for now is to swap out the busted tuner, throw in a new nut, and might cut a new bit of pickguard for the input jack, just clean up that repair a bit. no plans to swap anything else!

also considering stringing it ADGC - takes on this? i think the short scale might lend well to it getting a little closer to guitar territory...

more pics to come, these two are just what the seller sent... will update when it’s a bit cleaner!
lying dog-faced pony soldier.
Top

thank you!! i agree

cleaned up and a fresh set of rounds on there... 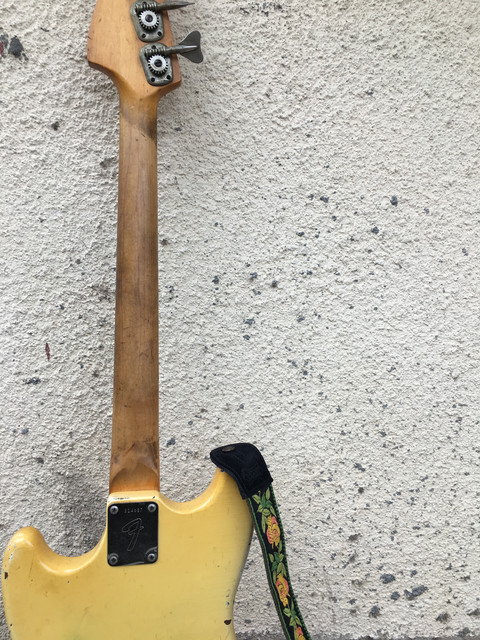 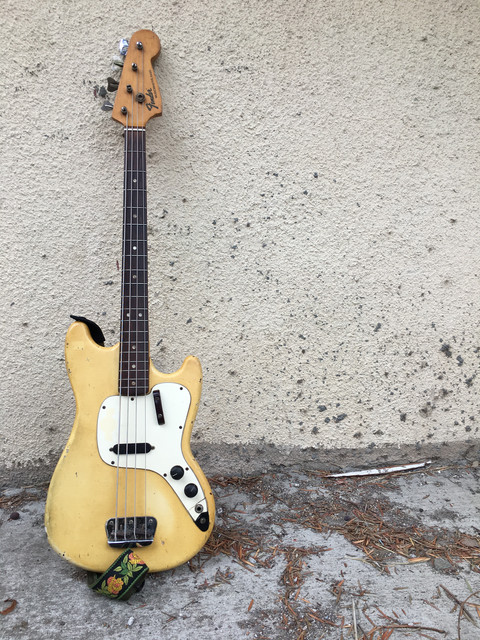 New tuner, then leave it as is

possibly!! the pickguard i would like to fix up, only because the crack was repaired really sloppily with superglue and there’s a big gaping lift letting dust and dirt into the input jack area... i think it would look really clean if i sanded down the cracked end of the guard and cut/drilled for a new plate just for that end bit. i know that leaves it less original but i think done right it would be a functional improvement...

also the nut is cut too deep and cracked in a couple places, so it just kinda needs to go.
lying dog-faced pony soldier.
Top

Wow that thing must sound good! There aren't many MM bass guitars around with that amount of honest play wear !

Sweet looking ride! I can imagine this one sounds killer.
Coincidentally I was just surfing TB coz I've started planning an "adult size" build - a 34" scale Musicmaster Bass with some very dry Oregon from an 18th century house demolition for the body slab and some roasted maple for the neck with a nice piece of Indian rosewood for the board. Got an original 2 saddle bridge and a 77 MMB pickup for it too. Topping it with a set of 66 Jazz bass oval tuners. I've always dug the sound of these little basses but with large hands and standing at 6'2" the originals are just a little small for me...
And I came on here to peruse the vintage section coz I've just scored a 66 JM and thought I'd stick my beak in and catch up with the latest vintage JM goss and first thread is a vintage Musicmaster. Bass...awesome!
Top

The bass is cool but what is that strap?
Top

thanks all! the strap is a levy’s of some sort, i like it too!

pickguard surgery was tackled last night and this morning, took an old strat pickguard and chopped it up with an exacto and lots of sanding, just kinda eyeballing the shape for now. felt a bit awful sanding down the end of the original guard but i’m happy with how it turned out, and the lift that was there is gone now. taking it apart confirmed my suspicions too... the electronics were acting up because the cavity was just completely full of dust and dirt... lol. next is some final light shaping and figuring out the best way to marry the two pieces.

strung it up a-c, tried a .40 gauge for the c but it feels a bit heavy. will probably just order a custom set soon, or a bass vi set... not sure yet. 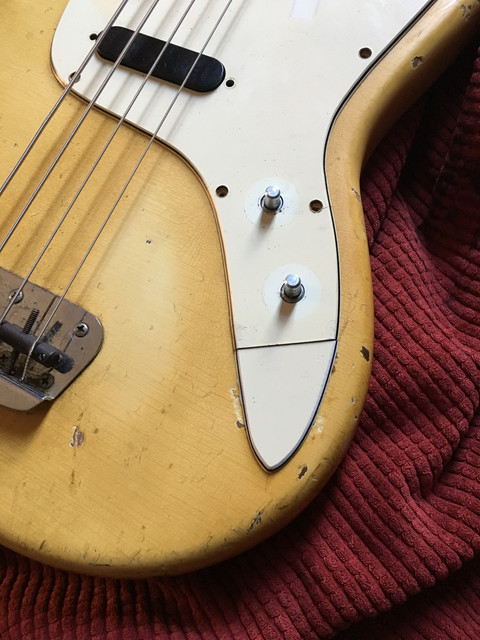 Why not just get a replacement pickguard?
Top

where’s the love in that?

speaking of, turns out the truss appears to have problems. so that’ll be fun too i guess...
lying dog-faced pony soldier.
Top
Post Reply
12 posts • Page 1 of 1