by savantjk
Recently bought a 1959 jazzmaster that previously had the finish stripped, but all intact other than a weak neck pickup - sending both to Novak for a lookover/repair. My question is - do I leave it stripped or refinish it? Will one help the value more than the other or is it just a matter of preference at this point? I wish it had the old finish intact

but couldn't pass on the deal.

Thanks in advance for the advice!

by Axolotl
That's one lovely JM and the wood grain is very pretty! That being said, in my experience a natural/stripped finish tends to lower the value of a vintage guitar. If it was mine I'd refinish it to a color of my liking (That's what I did to my stripped off '65). Glad to know you got a good deal, if the finish was original I'm sure the price would have been much, much higher. Keep us posted!

by Jazzmastervsjaguar
Oh man, Gorgeous guitar. Is the head stock missing the decal? If so I would definitely refinish it in a custom color with matching head stock... I know, maybe folks out there will say this isn't vintage correct. But that tort on a faded fiesta finish would look awesome!

by PorkyPrimeCut
Looks like you've got yourself a great restoration project there. OK, purist me chipping in....

As it's a tortoiseshell guard I'd personally refin it Olympic white or sunburst. If the headstock has been stripped just buy a decent repro spaghetti decal.

I've been looking at ways to refin my own '59 over the last year. It already had a decent sunburst that a guy in London did for me (a 1960 style one with a thicker black outer band) but I've been keen to get something a little different, namely a burst that has less black & little to no red left, with a nice transition between black & amber. Almost a tobacco burst, I guess. I'd then give it the freezer treatment for 24 hours to help the nitro laquer check a little.

by savantjk
I had an AVRI on my list for years, because I couldn't justify spending the money on a even a vintage jazzmaster body or neck to build a partsmaster.

So this is how the story goes. I patrol my local Craigslist and Facebook market like a hawk. I got a 1975 Gibson Grabber a few months back for $350, so I had faith that deals can still be found! We had gotten home from the hospital after having our first child and I had a notification from Facebook the next morning telling me that a Fender had been posted in my area. I looked at the listing and it had grainy non detailed pics but the case looked old, tuner profile looked vintage, and the plastics looked aged - but again it was really bad photo quality. The guitar was posted for $500!!! So I said it's worth meeting them. So I call my buddy who runs a shop and he said it's cool to have them meet there and he'd help me ID it. So the sellers get there and when I see the ratty case I'm trying not to show my excitement. We look over the guitar and the headstock decal is missing, but the shadow of it is there, slab rosewood, and all the bits I saw in the photos held up. We asked the guy how he got the guitar and he was at a garage sell and saw a guitar case in the corner, needed one for his cheap electric guitar and didn't wanna spend much so he asked the lady running it how much for the case - she said $20. He looked at it and there was a guitar in it. Told the lady - she replied that she didn't care and $20 was fine. So the guy I got it from did a little googling to determine it was a jazzmaster and apparently stopped there so he posted it up at $500. Pretty good off a $20 investment. I didn't haggle, put the money in his hand, and out the door they went. Then we really dug into it and found out it was a 59 model.

We tested the pickups and found the neck one to have barely any output.. I played it like that for a bit but really want it in working shape. So it's currently got the pickups out and I'm going to ship them out to Novak today.

by mcjt
very nice!
I like natural alder!
I have a 59 that I stripped layers of paint to find the alder, then turned to sonic blue.
yours will look great any way you want!
1: 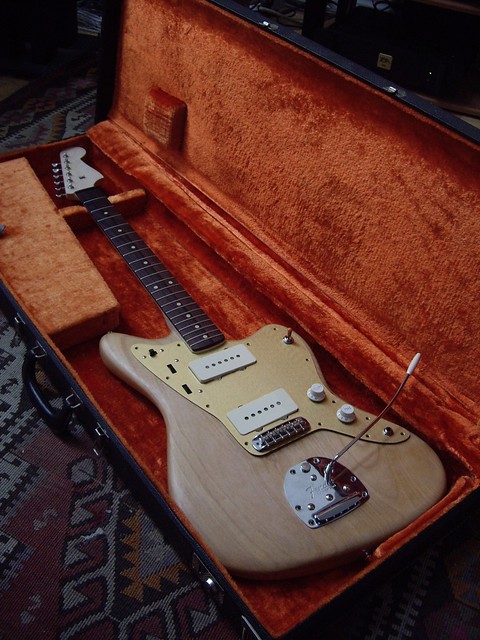 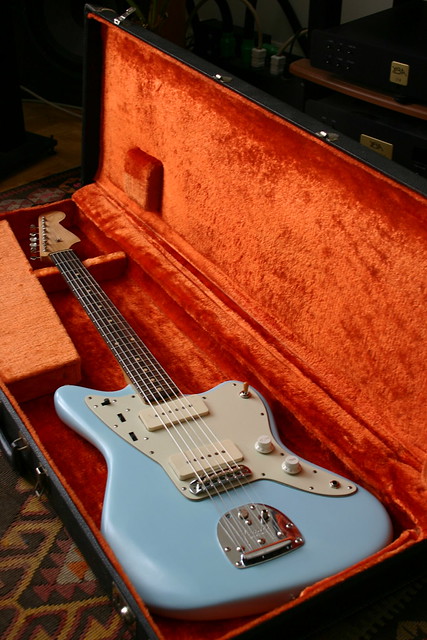 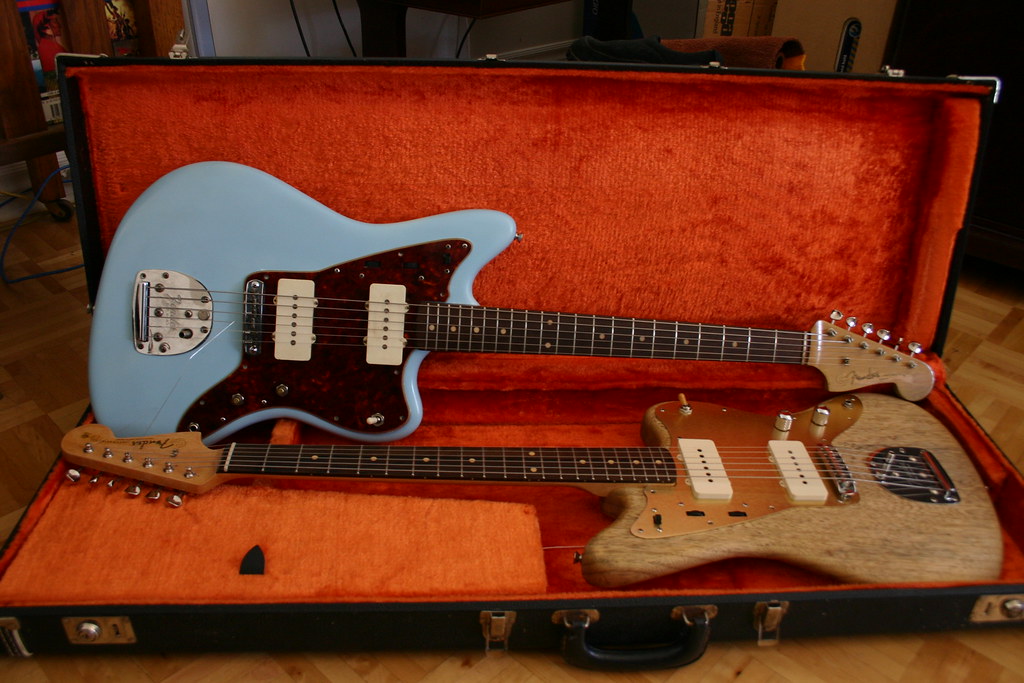 by Jazzmastervsjaguar
That's an amazing story. Do you want to triple your investment?

Going to hang on to this one! I know I wouldn't be able to get another for a long time!

And that Sonic blue is

by clef051
Wow a amazing deal. I wish I could find ones like that.

I'd get it refinished in charcoal frost, Im not set on guitars being vintage correct though either. I wouldn't strip a original finish to do it, but since it is already gone do whatever you want is my feelings. Olympic white or sunburst would also like great.

Anyways congrats, hope you get this up and playing soon. And don't be shy with posting more update pictures when you can

Am I right in thinking that this is an 11-hole guard too? If so, join the club

by savantjk
Pair nicely with the strat! I'm torn on the color.. best guess is it was a sunburst originally.. but they did a good job stripping away the old finish.

Who do you guys recommend for the refinish?

by Jazzmastervsjaguar
Ive used Marty bell and couldn’t be happier.

by Maggieo
Don't touch it! It's perfect. The grain is...