If anyone's interested, after the pics there's the story of how this lovely mongrel came to be. The short version would be "Got a 65 Jag with a bad neck, so I got a 65 mustang neck to match it" 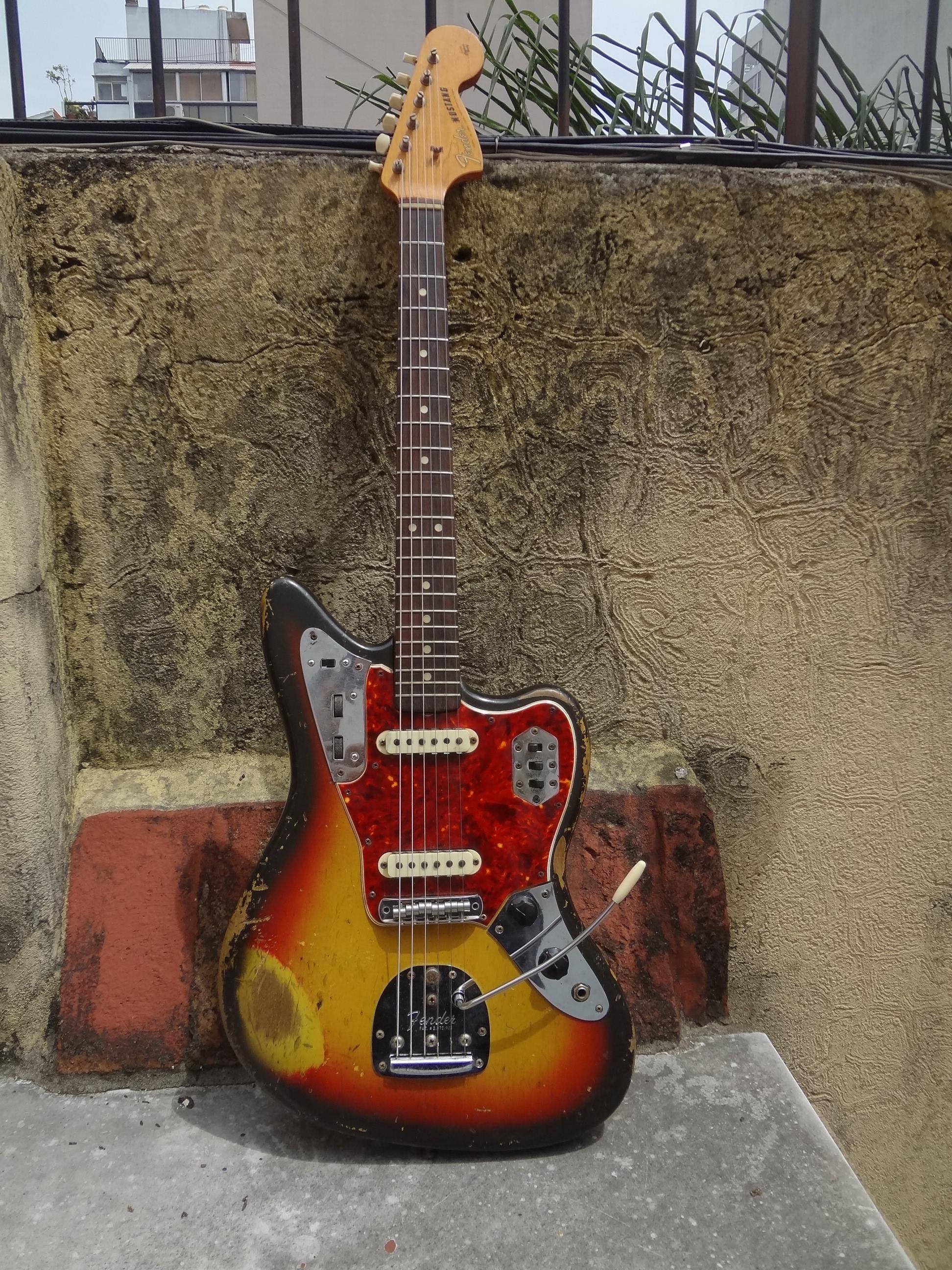 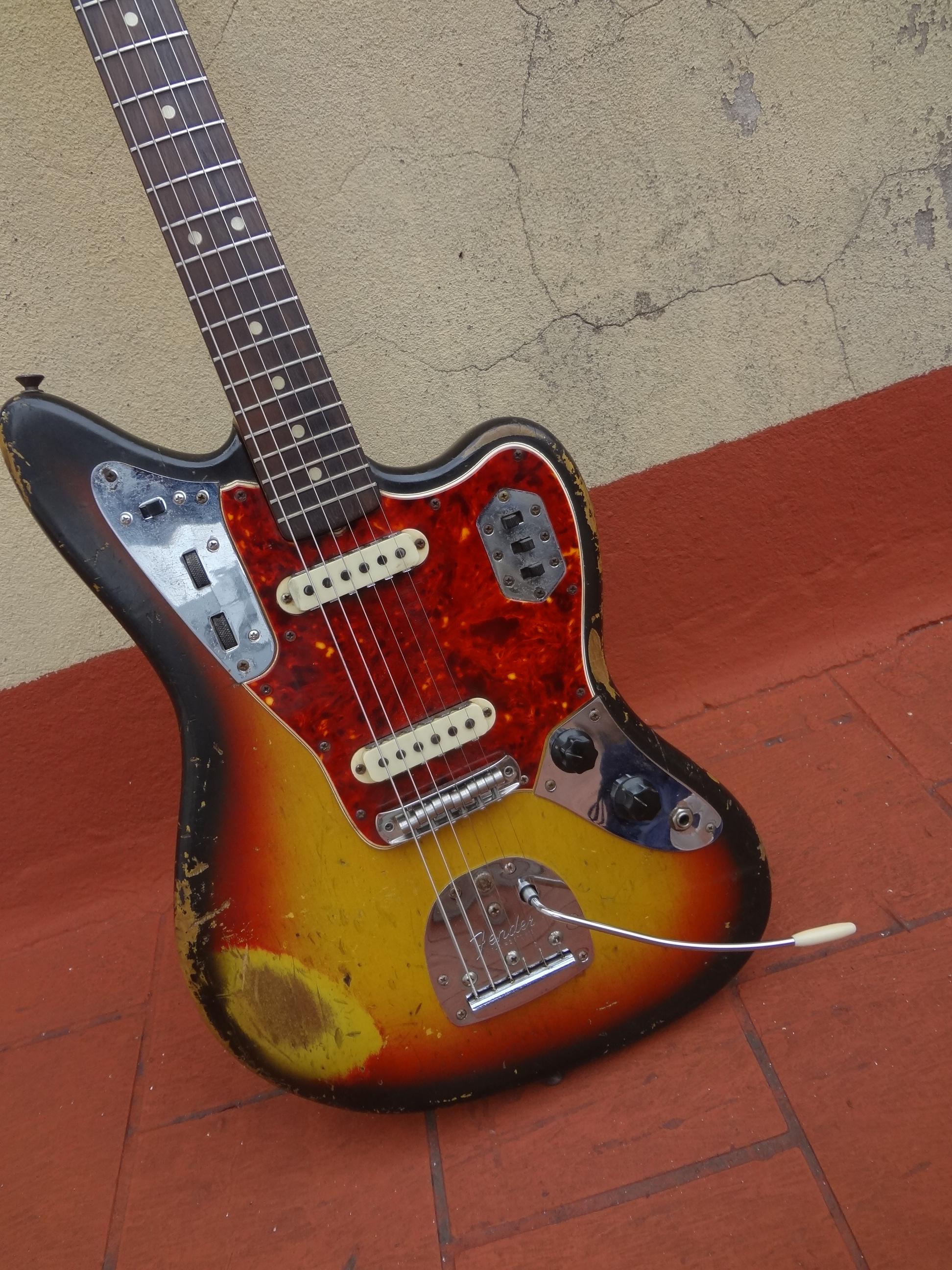 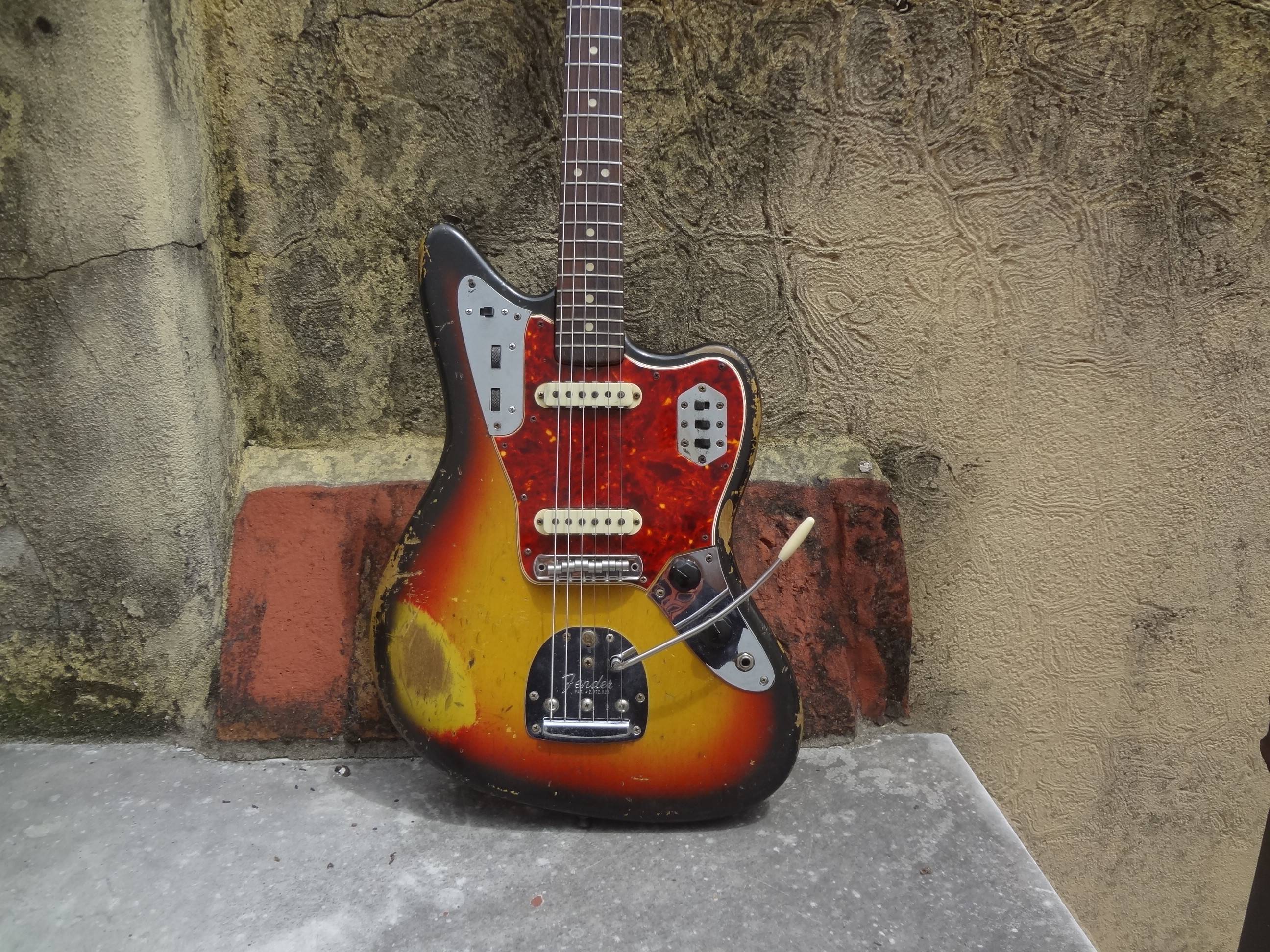 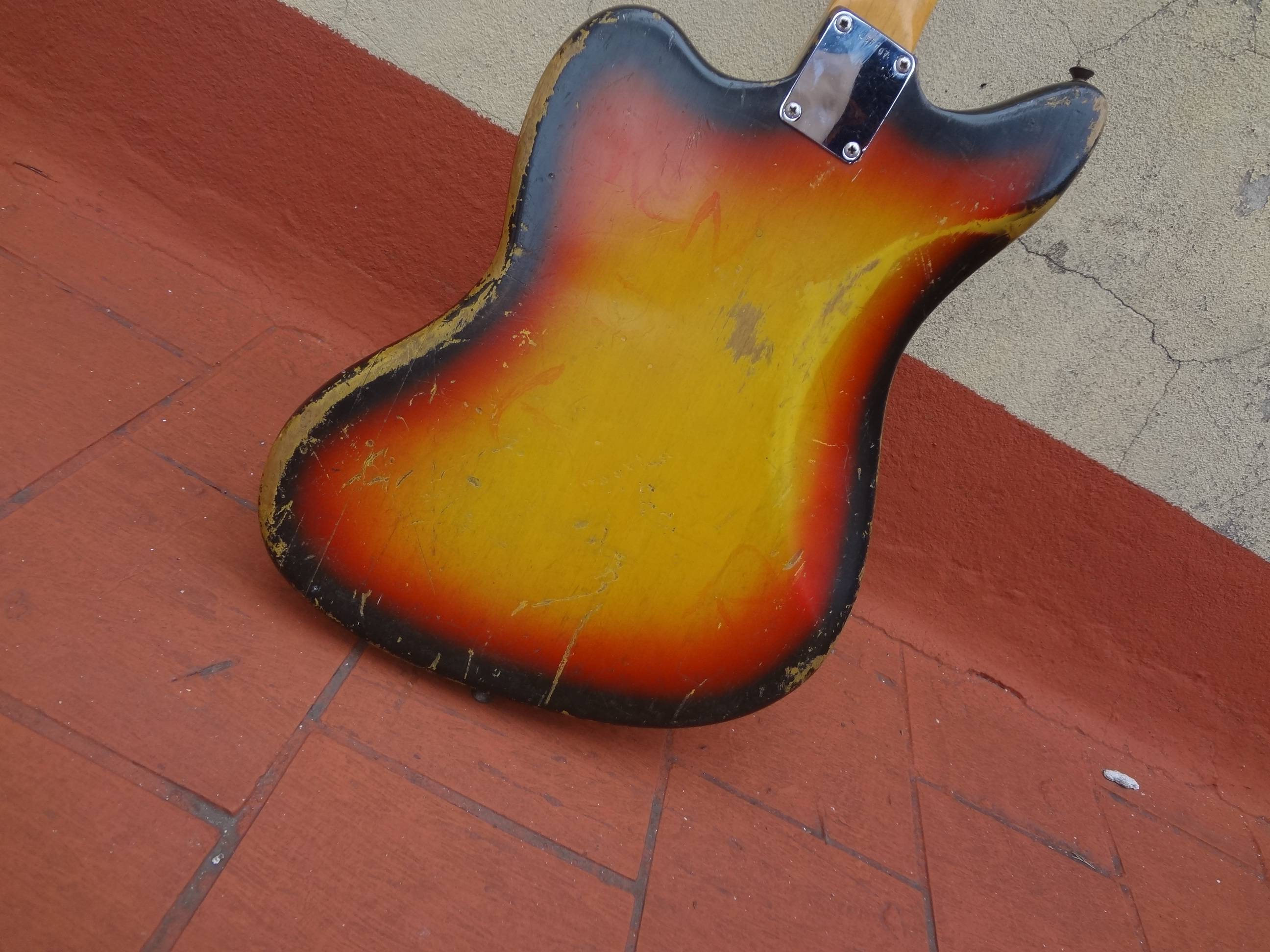 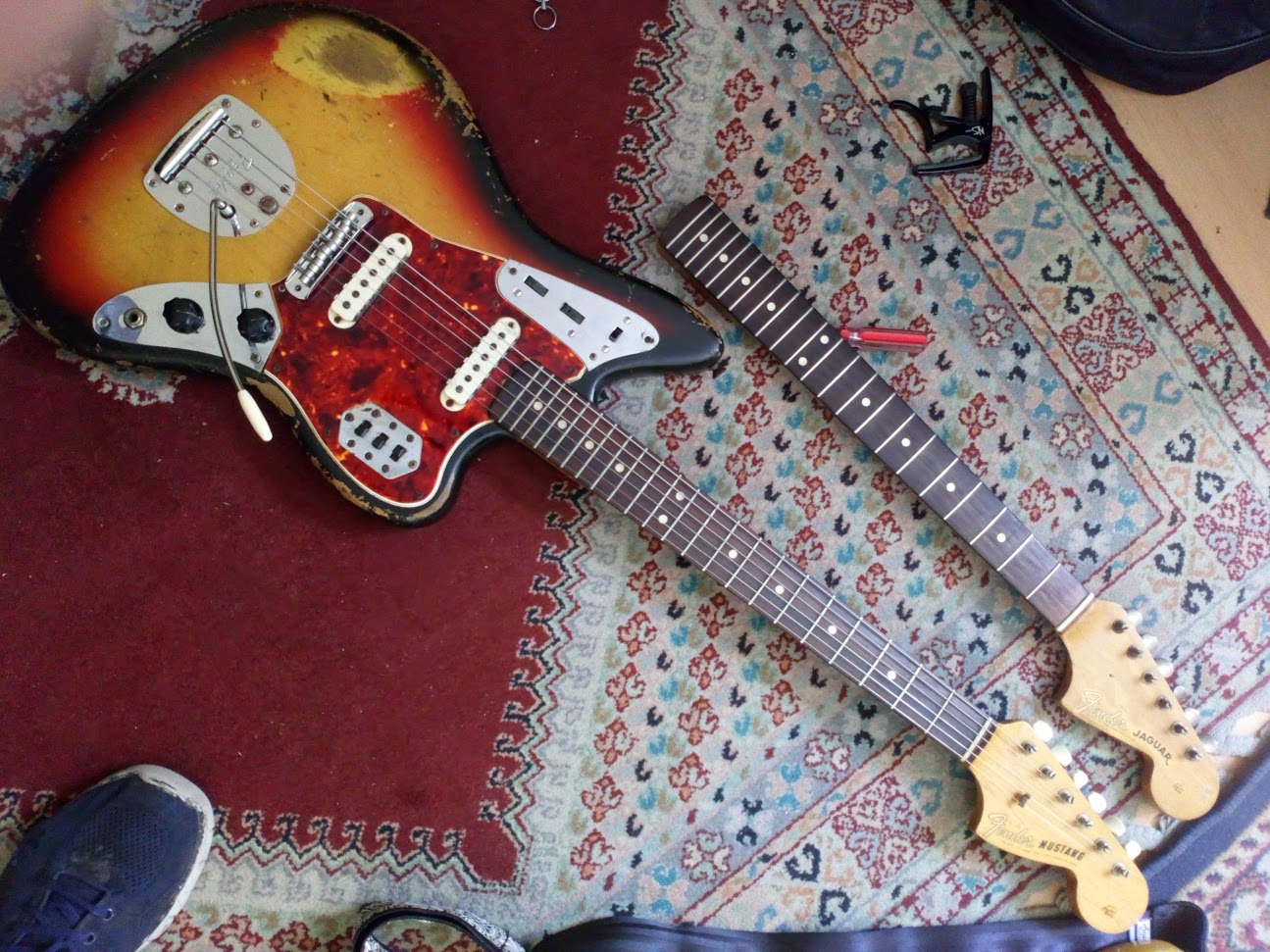 It all started about one year ago when someone here in OSG posted a link to this 65 Jag that was for sale. L series, with some amazing wear . It was at a decent price since it had this small crack at the headstock. I got infatuated with it and decided to flip my 65 poo-color refin D&B Jag to get it. That wasn't a problem, I offered it to another OSG forumite that lives here in Argentina, bought it promptly and he loves that guitar to this day. Super cool dude.

So I bought the 65 L series worn out Jag. The path for a US-bought guitar to reach me down here is usually Vendor ---> My gear holding friend in NJ ---> Another friend or friend of a friend that travels down here ---> Me . The whole thing may take several months. But hey, it beats paying shipping and customs!. I've brought a few pieces this way.

So, the Jag goes out to my gear holding friend who by the time was moving to new house. He gets the guitar, opens it a few weeks later. He tells me feels a bit rough but he's pretty sure I'll bring it back to life. Months go by. No one traveling. Finally in August, my good friend takes a trip and brings the Jag plus the staytrem bits I had ordered for it.

Oh the joy! Or at least initially... It took me a day or so to realize that something was wrong with that neck. From the 14th fret upwards, the fretboard took a dive that you could see with the naked eye, in playing position. The bridge had to be ridiculously high for the guitar to be playable and there was no shim to be seen. On a closer inspection and attempted setup, the neck was too flat, and oh surprise! The truss rod wasn't working. I also saw a long hairline crack along the rosewood. My luthier friend came over and added that the neck had a twist and that it had been resanded to compensate it, something clearly visible by the neck heel (something I should have at least wondered about in the pics). The tiny, worn frets had also been shaved to compensate the twist. I could feel the juncture of the rosewood and maple with my fingers, makes my wonder if at some point they took the fretboard out? Also, there was a huge neck pocket gap, as the pocket of the body seems to widen towards the neck a bit. This last thing is not too serious and it looks like it was from factory (maybe this Jag was finished on a friday afternoon) Even with all this shit going on I managed to bring the guitar to a playable condition. It was kinda close to what I'd deem fine except some nasty buzzes at the 7th and 8th frets. After fret 14 the thing was pretty unplayable though. The profile of the neck is nice, and all the finish on the back of it had been sanded away, so so much for original finish (feels pretty nice tho).

So yeah, neck was a complete basket case. I was planning on refretting it as Ido with all my vintage guitars, but no refret was going to save this. (my luthier bud said that with tall frets and some creative leveling the guitar should play at least better of what it did, but it would never be perfect all along the neck). Making a claim to the seller was out of question, months had passed by since the sale. Meanwhile, my father in law passed away, my baby son kept growing and we were about to start a renovation of a house. There was no way I'd start a fight over something like this. Not half a world away and with a purchase that was done 6 months prior. So fuck it, I bit the bullet since it was pretty much the only option. I even refrained myself of posting about it here in OSG so I wouldn't get too bitter about it. In the meantime, the guy who had bought my poo Jaguar was playing with it and posting pics and videos and I was missing its fat, straight neck.

So what you do when you have an amazing 65 Jag body? . No way I'd stick a newer neck on this. 65 Jag necks pop on ebay here and there but they go usually for more than I wanted to spend, and I wanted a neck with no binding which limited my choices even more. The natural next choice would be a Mustang neck, preferably from 65 to match some of the vintage charm of the body. So I see one of ebay's butchers has this one which looked in very decent shape, was dated on dec 65 and had a slab board! That had to be the one! Too bad I was low on funds at the moment and someone bought it. Goddamit!! All the other mustang necks available were from other years (66 and up)

A few weeks go by and not too much to my surprise, fellow OSG member savantjk shows his latest Jaguar project featuring "a great slab 65 mustang neck I got at a decent price on Ebay" (yes it was the same I had been watching). I thought of message him asking to buy it but I though to be too intrusive. Another couple of weeks go by and one day I see it listed in the sale section since his Jag project was being sold off to fund something else. So it had to be this neck, it seemed to have chosen me and my mangled Jag across time and space (haha bullshit, but by then I was pretty goddam set on getting that 65 slab neck, nothing as nice had popped since I first saw it). So after a short and pleasant interaction with savantjk, I bought the neck and had it to my friend in Queens. I also got 65 mustang F tuners for it, since the Klusons on the warped neck wouldn't fit without drilling and fuck that.

Months passed by. Last week my friend finally arrives with the neck and another bunch of shit for me. The moment of truth! Cleaned the neck and slapped it to the Jag. Aaaaaahhhh!! The joy of being able to play it with a true and consistent neck all throughout. Even with pretty low frets and the original worn nut the guitar sounds great, no fretting, most notes clear as a bell. And the truss rod works well. I'm still refretting it -the frets are too low for my taste and I have to dig into the wood- but this is already a joy to play as it is. It may be a while until I decide to hit the shop. Original finish on the back, less worn that the body but still a great match IMHO. The neck feels super hefty, even fatter than my previous 65 Jag and the nut width is on the thick side. Very slight taper too, just the way I like it. Feels like a typical mid 65 Fender neck but without the binding. It even makes the pocket gap look smaller, for some reason. I'm pretty elated about it.

No plans on changing the decal or tuners on this one to make it more Jag-like. If I ever come across a great 65 Jag neck at the right price, I might give it a go and use this neck for a vintage daphne blue partstang. In any case, half a Jag, half a Mustang, all 65!

Sorry to hear about the disappointment with the original neck, but I'm glad it worked out.

I've currently got two jags with '65 and '66 Mustang necks, but they were both parts guitars to begin with and not a salvage operation.
Top

Really nice body wear ...and a Slabboard Mustang neck too

Mostly newer parts but neck and body are vintage. 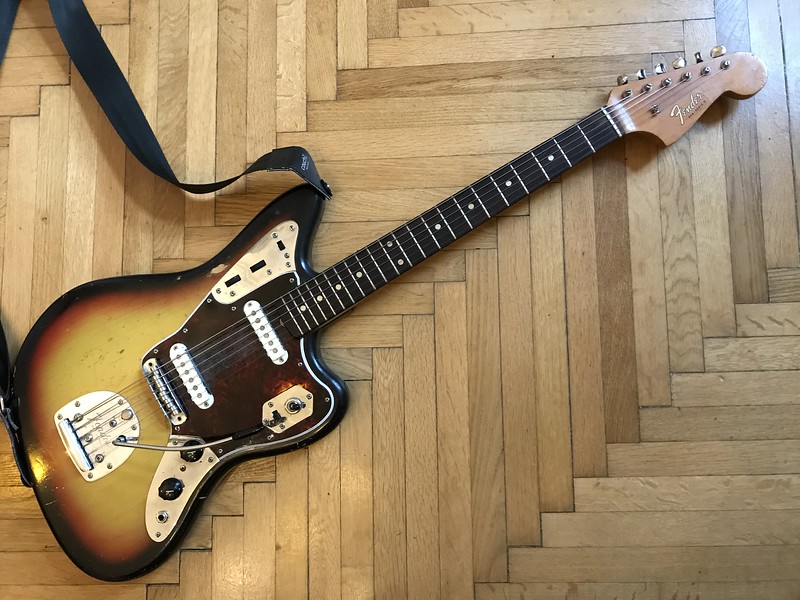 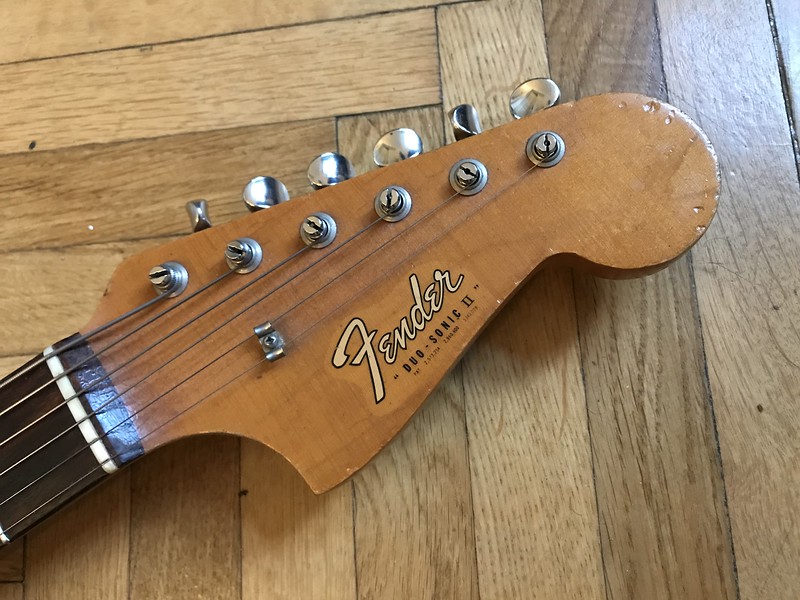 Looks great but to bad about the original neck. Happy you were able to solve it this way since the body looks really good
Top

super happy for you, man! Glad you like the neck and hope it was worth the wait! Still wanting a Jaguar but I am still happy with the old LP Jr I bought that created the need to sell

oh shit that is nice!

yeah i know about the long waiting periods...

i love delay SO much ...that i procrastinate all the time.
Top
Post Reply
7 posts • Page 1 of 1