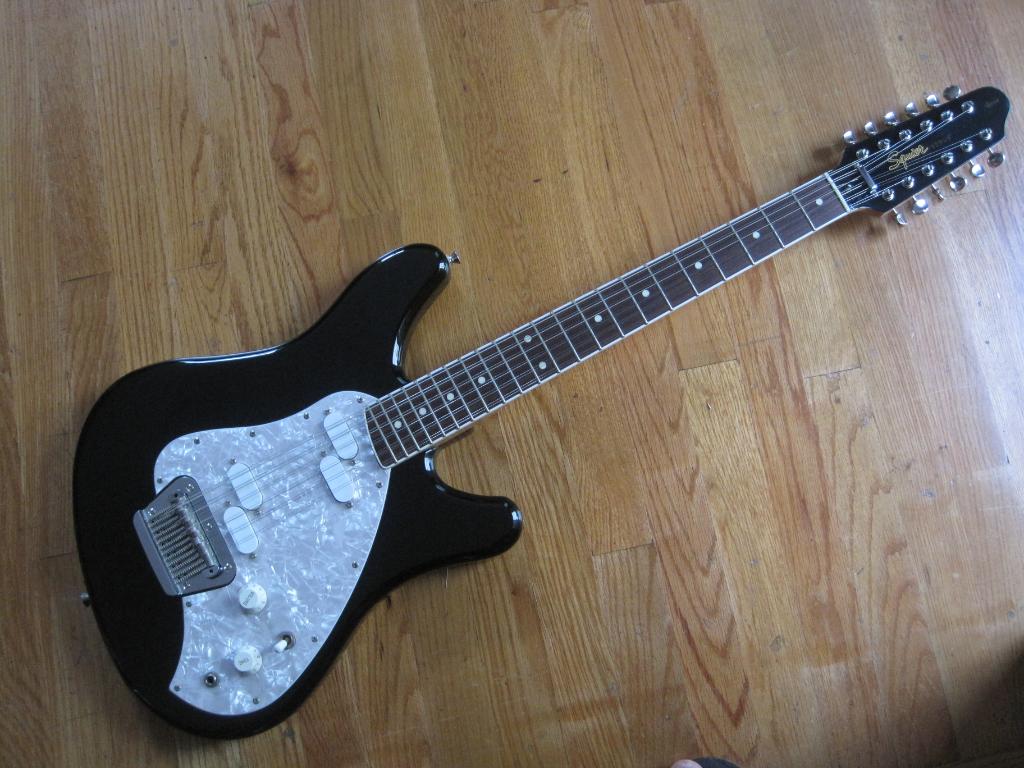 Yours are cooler, yes!
Top

My favorite Venus is the twelve string because I think the twelve string headstock looks better than their six. Black is also the best color for some reason. The one we sold to Guy Picciotto of Fugazi was black and was to die for. I brought it to a high school art class to show it off and I could see all of the talented art students shrink in their seats. Some things are just universally impressive. Hand made guitars are one of those impressive things. Honestly I would love to have a twelve string Venus in black. -Tim
Top

P.S. I talked to Danny about the story that Elecrovac posted earlier about Kurt Kobain. He said it was true and reminded me that we were building Kurt Kobain a left handed one when he passed away. I had forgotten. Here's the kicker. Danny still has the left handed body in the raw wood! Now. How cool is that?

I would rate that as extremely cool!
Top

If you guys were ever to start building these again I would definitely be in the market for one. They are just too cool.
Top

i loved my XII venus... and my brother still has a beat to shit sunburst 6er... i'm gonna get it, someday!

Tim tried to talk my ear off while I was on the way to the Jeff Mangum show in LA on Monday but he didn't even get close. The only reason I had to stop the fascinating history being told by him is because I had to drive and I already have one driving while on cell phone ticket, no need or want for another

. Between school and work I haven't had the time to call him back again but I think I should be able to tomorrow. It's so awesome and crazy hearing him talk about the history behind the guitars and what happened with the whole situation and he even said that there were less than 20 made, nowhere near one or two hundred even though that's where they were getting ready to go with it. I think I'm just as excited as Tim because it's all sooo crazy. Anyway, we'll keep this thread updated as it goes along

Danny and I are meeting tonight about the whole Mercury thing. I am now a skilled fabricator, Shop manager, Car painter and woodworker(I wasn't then). Danny is always looking for a business plan. We'll see how it goes. This thread had been an inspiration to us to say the least. Thanks guys. I'll let you guys know how it goes. -Tim
Top

I thought I might post a few thoughts about some design comments and questions that have been posted on this thread. The inspiration for the guitars was taken from my late 80s aqua green Strat plus that I had put a pearloid pickguard on. The early Strat plus models had Sperzel locking tuners (Not the Fender versions that came later). We mixed the Rickenbacker theme with the more exciting colors and playability of the vintage Fenders who took their inspiration from GM car colors (I think even down to the paint codes). We had no knowledge of the Surfcasters by Charvel at the point of the conception of ours. It bothered us that no one made a guitar that was essentially a practical and more exciting Rickenbacker. I owned a Rickenbacker at the time and the Strat Plus was just so much better to play live or anywhere else but at the same time the Rickenbacker was more interesting to look at (More traditional craftsmanship, binding, etc).

As for the comments about the busy electronics layout, I agree in a way. The only problem is that we built some with less electronics and knobs as a "Base" model and some with more options. As for Fender being more "restrained", I might be one of the few people reading this who has owned one of our Mercury guitars, a Jaguar, Jazzmaster, Strat, and a Rickenbacker all at the same time. The Jazzmaster is no less complicated than ours in practice and the Jaguar is an electrical and layout joke. I like the constructive criticism but I am also compelled to point out the fact that Fender copied us, not the other way around. We took design cues from other guitars but they took our whole dang guitar and then didn't have the common courtesy to put the right headstock on it. I am more upset about that than I am about any other part of this story.

About the "Did everything HAVE to be rounded off?" comment. Our guitars usually had binding on the entire silhouette as you can see in the photos. They are actually squared off and we wanted them to show more craftsmanship than the Fender models. I saw one of our discarded guitar necks last night. The quality is a no contest between ours and fender's. Truly. Live-I-Evil seems to agree. - Tim
Top

If this gives me any credibility on my opinions about various guitars I would like to say that I have owned 25 or so guitars including a '57 Gretsch country gentleman, Late '71 SG, Two vintage Les Pauls, A Rickenbacker, Gibson J160, Jaguar, and Jazzmaster, . I ran a recording studio and played live regularly and I will say that I think that the Early Strat Plus is possibly the best guitar ever mass produced. If you ever get a chance to own one don't be surprised if you suddenly feel the urge to sell off your collection because the Strat Plus pretty much does it all.


Did I mention that I own a 1977 Marshall JMP 50 that was owned by the band Smashing Pumpkins? It still has "Pumpkins" stenciled on the top. I bought it in Atlanta when they were there recording "Siamese Dream". They weren't famous yet. I got it from a music store for $300. I asked about it and the Heavy metal salesman said, "Yeah, some band Smash-a-pumkin brought it in. It was some Oriental dude and a blonde chick. They traded it for a bass for her" Not bragging, just thought it was a fun story.
-Tim
Top

Dude- don't worry about your cred, or any of the other criticisms or design issues that have been voiced on here- your achievements can definitely stand on their own, even against the best & brightest builders on here. The observations were definitely not personal attacks that needed defending, just expressions of each poster's personal tastes viewed through the lens of their own experience. Despite the off-hand comments, I don't think anyone on the forum here would refuse the chance to even play one of your guitars- just for the sake of the history and experience.

The Mercury is what it is, and there's no reason to re-think or defend the options that you decided (far before the founding of this forum) to include on it. I will keep my attention tuned to the possibility of your resuming production on these- PLEASE RESERVE THE FIRST 12-STRING MERCURY FOR ME!

As far as the Strat Plus being the ultimate guitar- we can argue that one all day & night for 6 months (in another thread, hopefully) on here, and it will still not change anyone's opinion on the matter- although it might prompt a few members to give one a go when they come across it.

Glad you made it here- This thread rulez.
Top

you should find a picture of courtney playing your guitar, buy the rights to the photo and use it to publicise your guitars, its would only be fair she used something of yours without your permission
Top

I guess the discovery of 13 original bodies under Danny's bed (including the one built for Kurt Cobain) has inspired us to get back to building. Check out how we spelled Cobain. 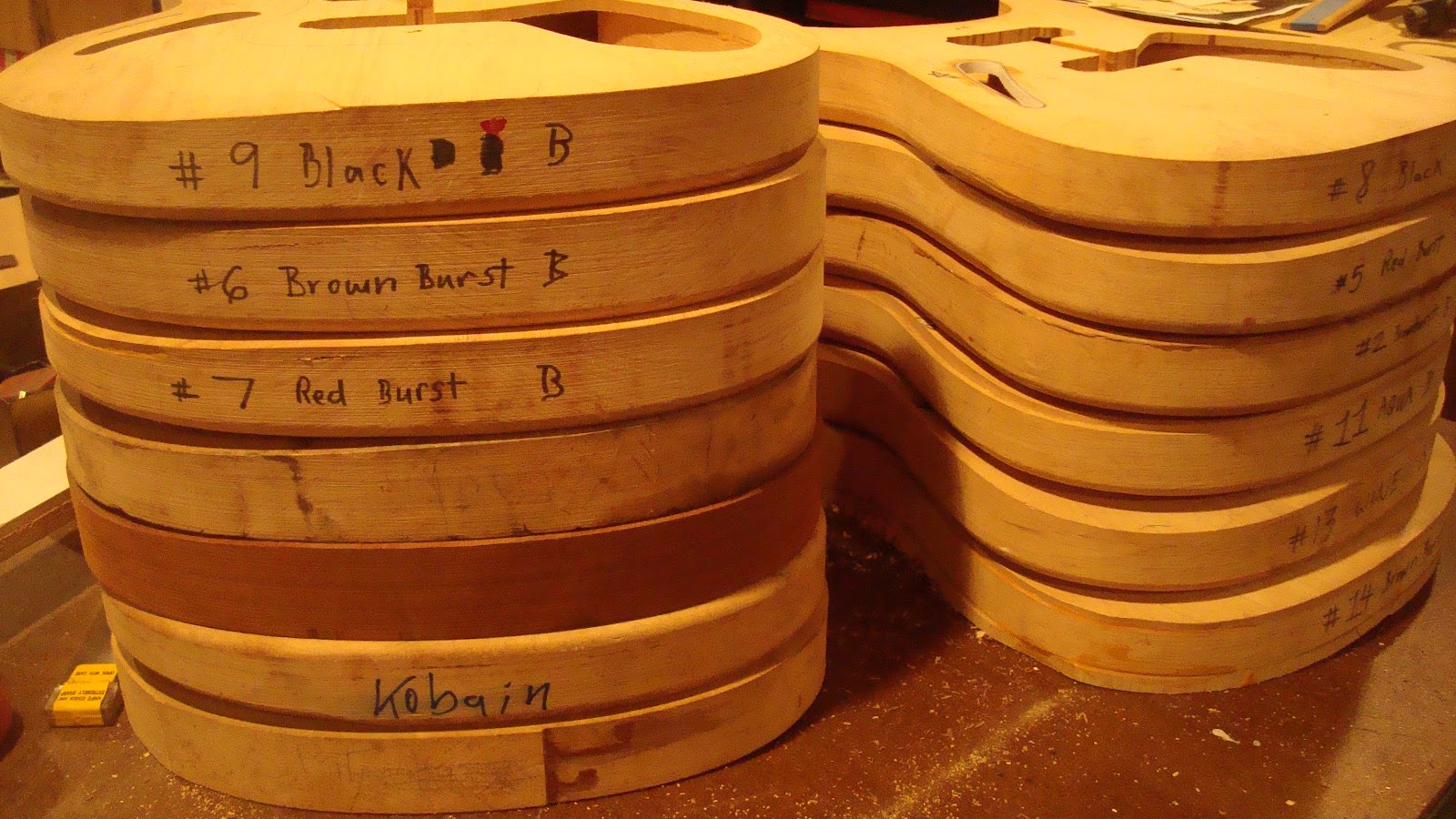 So Tim- are these 13 part of the original (estimated) 20, or were they part of a larger run?

PLEASE make one a 12-string for me!
Top
Post Reply
227 posts