For help with setups and other technical issues.
Post Reply
4 posts • Page 1 of 1

Does anyone know of a reliable resource for all the screw hole sizes and depths in vintage Fender bodies?

I’ve got an unmolested Tele body, and I want to make sure I don’t drill anything too wide or deep, ie bridge screws, strap buttons, pickguard, etc.

Thanks in advance.
Top

By unmolested, do you mean a newly-built body with no holes drilled, or a vintage body that has not been modified? I assume the former, hence the need to drill.

Personally, I'd go by the screws you're using rather than vintage screw specs. When I assemble a build, before drilling any given hole, I line up the hardware I'm using, mark the location with a pencil, and then use the screws that I have in stock for that piece of hardware (whether they were included with the hardware or I bought them separately) to pick my bit (by lining up the bit such that it matches the size of the screw minus the teeth), and mark the desired depth with a piece of painter's tape on my bit so that I know when to stop. I line the screw up by holding it with the head at the tip of the bit (facing "backwards" relative to the bit) and place the tape where the tip of the screw reaches on the bit.

If you prefer charts and numbers rather than the eye test, just use a chart such as this one, based on the screw you intend to use. I'm not organized enough to do that, so I stick with the eye test and painter's tape solution that my dad taught me years ago. Putting screws into wood was a good part of his work day for a few decades so I kinda just took his word on that approach. 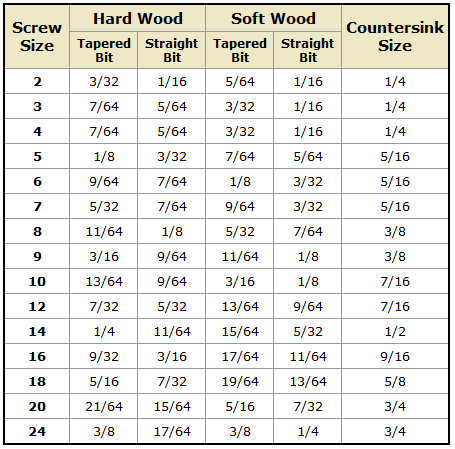 Reasonable; I generally use the same method. I’m installing Fender-spec parts with the included screws, so I was hoping to do it “proper”.
Top

I don't know of any source for all vintage Fender screw / hole sizes. It's hard enough to find all the modern sizes for current Fender guitars all in one place (many of which may be the same as vintage). I keep a list of sizes, for future use as I find them listed somewhere (which is often one by one).
Riley is not bad for current screws ...
https://darrenriley.com/product-categor ... der-parts/
Top
Post Reply
4 posts • Page 1 of 1