Talk about modding or building your own guitar from scratch.
Post Reply
21 posts

After a thread post by member In-Sound about a 12-string trem idea, my brain has been squishing around this concept ever since-

I am thinking about installing a Bigsby trem on one of my Surfcaster 12s, but only having it active on the octaved course. The design of the 12-string bridge on these has the main six strings anchored through the body, but the doubled six anchored on the back of the bridge. I'd use those holes to guide the strings back under the rollbar and attach them on the trem.

I've seen a few surfcasters with a re-cut nut so they could be strung Ric-style, which would essentially enable the main six to be active on the trem instead, but I'm thinking to start with the standard setup.

The bottom strap button on the Surfcasters is about an inch off-center, so I don't think the trapeze-mount Bigsby will work. I prefer the look of the trapeze-mount ones, but I've never seen one installed on an offset. My only references for Bigsby looks are the dressing room, (the bigsbys on there all look

Plus side: could be very cool to mess with the resonant warble caused by detuned strings vs. in-tune strings, especially with some measure of control. It also looks sort of awesome in the mock-up. The tuning stability on these Surfys is rock-solid, so I'm hoping the stock tuners will still do the job.

Minus side: 4 holes drilled into one of my precious guitars!

Also, the tuning could go horribly wrong- and re-tuning a 12-string onstage is NOT something I want to be forced into.

Just four holes... I'm thinking it'll go on the black one, although it looks very cool on the red.

Interesting idea. But if it turns out to be a not particularly interesting effect, you've damaged a nice guitar. The old Vox Mark XII's had bigsby-style trems on all 12 strings (you can hear Will using one on Echo's "The Killing Moon" - apparently they had to record a measure or two, then re-tune.)

There are gadgets that now allow you to mount a Bigsby without drilling (http://www.vibramate.com/index.php" onclick="window.open(this.href);return false;) Maybe look into that before you proceed.

Or you could just sell me the black one and remove all temptation.

Dunno about modding the Surfcaster, seems like something to regret later. But I have an idea how you could implement your concept - why not get one of those bridges drilled for string-through as well as top-loading. Send one set of strings through the body (or convert the string-through holes to keyhole shapes with a small rout underneath, so you can hook the ball ends into the bridge plate from above). Then string your octave strings through the top-load holes, and back to your trem.

No doubt there's easier ways, like an open bridge and a keyhole plate just in front of the trem.
Top

The bridge IS set up for that- looks just like this one:

So really it wouldn't require any modification apart from the 4 holes to mount the trem unit itself.

Jetset- As for the Vibramate, It looks like they are only formatted as replacements for the stoptail piece, as they still need the anchor holes to mount into.
Top

I dunno--there were some Vox Tempest XIIs with vibratos, but I don't know how well they worked. (Fortunately I found one without.

I tend to agree that this isn't an experiment to try on a real Surfcaster 12; they're just too nice and too rare to mess with like that (imho). Especially if it's an effect you would only use occasionally, maybe it would be best to get some sort of cheapo (like a Jay Turser or something) and fiddle with that.

(And thanks for the nice comment about my Surfcaster....)
Photoblog: http://scottclarkphotos.blogspot.com/
Top

Following the sound advice I recieved on this forum, I have just purchased a guitar to try this out on before making the 'big move' on any of my surfcaster 12s-

Made a lowball 'best offer' on a Schecter Corsair 12 string limited-run guitar (only 16 made?) and won it! I've always liked the 335 shape, but never tried any of the Gibson or Epi 12-strings along those lines- seen a few vintage 335-12s on ebay over the years, but none ever dipped low enough to be in my budget range. I figure the Schecter has at least decent build quality & materials, probably twice as good as anything else in the ridiculously low price range I got this one in. Cheap enough to be a good experiment, fixable if it fails, but still decent (and good-looking) enough to be a stage & studio player if it works like I hope.

Here's a stock photo of the lovely beast: 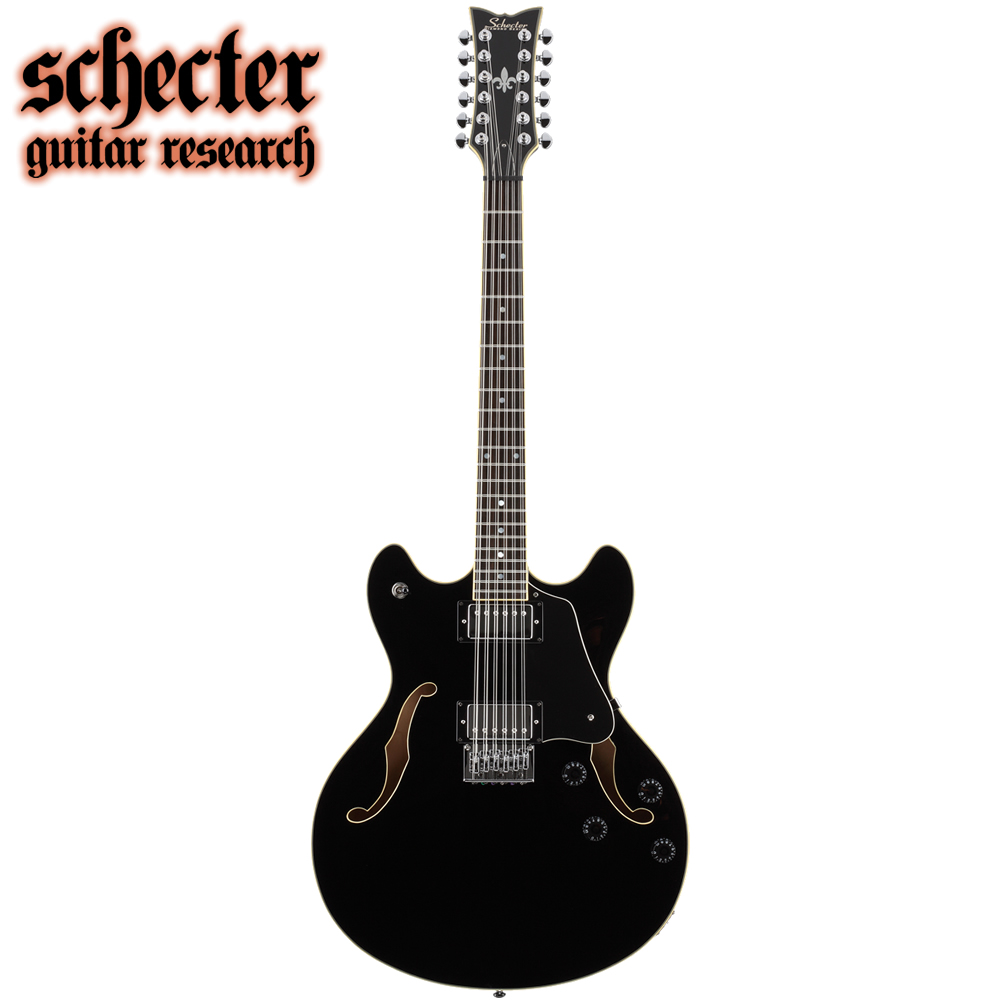 Gonna try out the 6-on-6-off trem with a Bigsby B-7 or B-700. There's plenty of room on the bottom end, and it'll look sharp with the trapeze tailpiece/trem unit.
Top

So wait, if you only vibrato six strings at once, doesn't that cause some horrible out-of-tune sounds?
Top

That's kinda the point- I think the detune vs. in-tune could be a cool thing to mess about with.
Top

someone had an awesome build thread on here for a 12 string strat, they modified a 12 string bridge into a standard strat trem bridge and posted sound samples of it do a search!
Top

SignoftheDragon wrote:That's kinda the point- I think the detune vs. in-tune could be a cool thing to mess about with.

If the name Kevin Sheilds means anything to you, that's part of his magic w/the Jag/JM whammy + open tunings.
And if I'm not in a band, don't mean I'm square...and if I am, well then I don't care..
Top

AndyTran wrote:So wait, if you only vibrato six strings at once, doesn't that cause some horrible out-of-tune sounds?

I believe it gives a phase-ish effect or something, but it would sound really interesting if nothing else.
COME UP OUT DA WATER LIKE A BABY DOLPHIN
ALWAYS SEE ME GLISTENING LIKE I'M OUT DA WATER OFTEN
Top

Guitar arrived today- feels pretty well-put together. The out-of-the-box setup is pretty close to where I like it- I may tweak it just a bit once I can get it plugged in and run through a few laps. Bigsby B70 on the way!
Top

DONE! SO far it feels pretty good- gotta go plug it in tonight & see how it works with the band.

I did end up moving the strap button 1/4" upwards to accomodate the slight offset of the 2nd course of strings, but otherwise the install went perfectly.

Now I have to find a case that'll fit it.

Took it to the closest local music store today- mostly to see if they had a case that would fit it. (no luck, BTW) Plugged her into a Vox combo- wow. This thing's got a HUGE range of tones to explore. So far I am completely floored by the quality, fit & finish, setup, playability, and tone of this guitar.

The trem works as I had hoped- I'll have to mod it just a bit to fix a couple small issues:

1) A small issue with the wound strings entering the bridge- a minor 'plink' with any bend beyond a quarter-tone, and another when it comes back into tune. Fortunately, there is only one wound string to deal with on the octave course- the low 'E'. I'm considering switching it out for a plain string if I can find one with a suitably heavy gauge. (specs on the D'addario set I've got installed call for a .026 in that position) Alternately I suppose I could switch that one to a flatwound. The Bigsby instructions recommend using graphite at the contact points, so I'll try that first.

2) The trem unit was designed to accomodate the tension associated with a full set of strings at concert pitch, so the counter-tension spring is a bit too beefy when it's only working against the smaller octave set. Not too big a problem, but a softer spring in the right size may be hard to come by. The only real issue this causes is that the trem bar's 'at rest' position is a bit too far from the body for my taste.

Other than that, everything runs perfectly. I'm impressed enough with the guitar and Bigsby combo that I think I'll just keep this one for the trem, and leave my precious surfcaster 12s alone. I guess the acid test has yet to be done: assimilating it into my concert setup.

I'll see if I can get some sound/video clips put together to post the effect for the curious.
Top

newdawnfades wrote:someone had an awesome build thread on here for a 12 string strat, they modified a 12 string bridge into a standard strat trem bridge and posted sound samples of it do a search!

That was Sookwinder I think- brilliant work!

Re the Bigsby spring, they come in 2 lengths (or at least used to)- 3/4" and 1". If you have the 1" now, maybe the shorter version could be better if you're hooking the octave strings to the Bigsby.
Watching the corners turn corners
Top
Post Reply
21 posts