For guitars of the straight waisted variety (or reverse offset).
Post Reply
11 posts • Page 1 of 1

I want to buy a Danelectro type guitar as a second instrument, as backup to my Doheny Tribute and for alternate tunings etc.

I'm in the UK and want to keep cost below £200 but have been struggling to find a used Danelectro at a sensible price, or that's local to me (a lot of eBay sellers want collection only and seem to be on the other side of the country).

So, I started reading up online and there's not much out there on them really. I've found one or two reasonably positive reviews, but they don't really talk much about masonite vs solid mahogany.

However, lots of people in forums say they're sacrilegious because they have solid mahogany bodies and thus aren't true to the original Danelectro masonite construction. Oh, and that this means they sound totally different. I do wonder how many of these people actually tried one, though.

Just wondering, has anyone on this forum every played/owned one, and is there really such a huge difference in sound? I mean, they've still got lipstick pickups and similar geometry, haven't they?

A while back I had a 335 and an SG at the same time. Unplugged, they sounded totally different. However, when I plugged them in - and I'm not just saying this - I was amazed to find that they sounded more or less the same to me when played clean in a Fender amp, or dirty. Any difference was very subtle, and could have been due to any number of factors aside from body wood/construction. This was in complete contrast to what I'd read online, about how completely different a 335 sounds to an SG or Les Paul. I do wonder if body wood/construction can really make that much of a difference, and if pickups/electronics/scale length aren't responsible for 95% of a particular guitar's "sound".......
Top

I have two “reissue” 1303 U2s. I bought them used. Considering how little I spent on them it’s hard to complain.

The necks are pretty nice. A little narrower at the nut than I’d ideally want.

They are wildly different in weight. Almost a pound.

The ferrules are not a snug fit and easily fall out during string changes.

Sonically I think the solid bodies are an asset. They give the sound a throaty quality. They’re not as scooped as a typical Dano.

The pickups are good but not outstanding. I probably won’t bother changing them. The neck is reverse wound which cancels hum in the middle position.

The most annoying aspects are the cheap concentric pots and the crappy plastic nuts/shallow headstock angle. For the latter I just wrapped some elastic hair bands around the strings to kill the pinging. New nuts and new master volume/master tone setups are on the list if I hang onto these.
Top

Oh, and the pickups are a good bit hotter than vintage spec. That’s pretty common for cheap modern lipsticks.
Top

I actually prefer the idea of a solid mahogany body to masonite if it doesn't massively compromise tone, simply because it should be more robust. Also, the tape binding on the Danos always seems as though it starts to lift in areas.
Top

I can't decide which looks better, though. Daphne Blue or Black Sparkle. 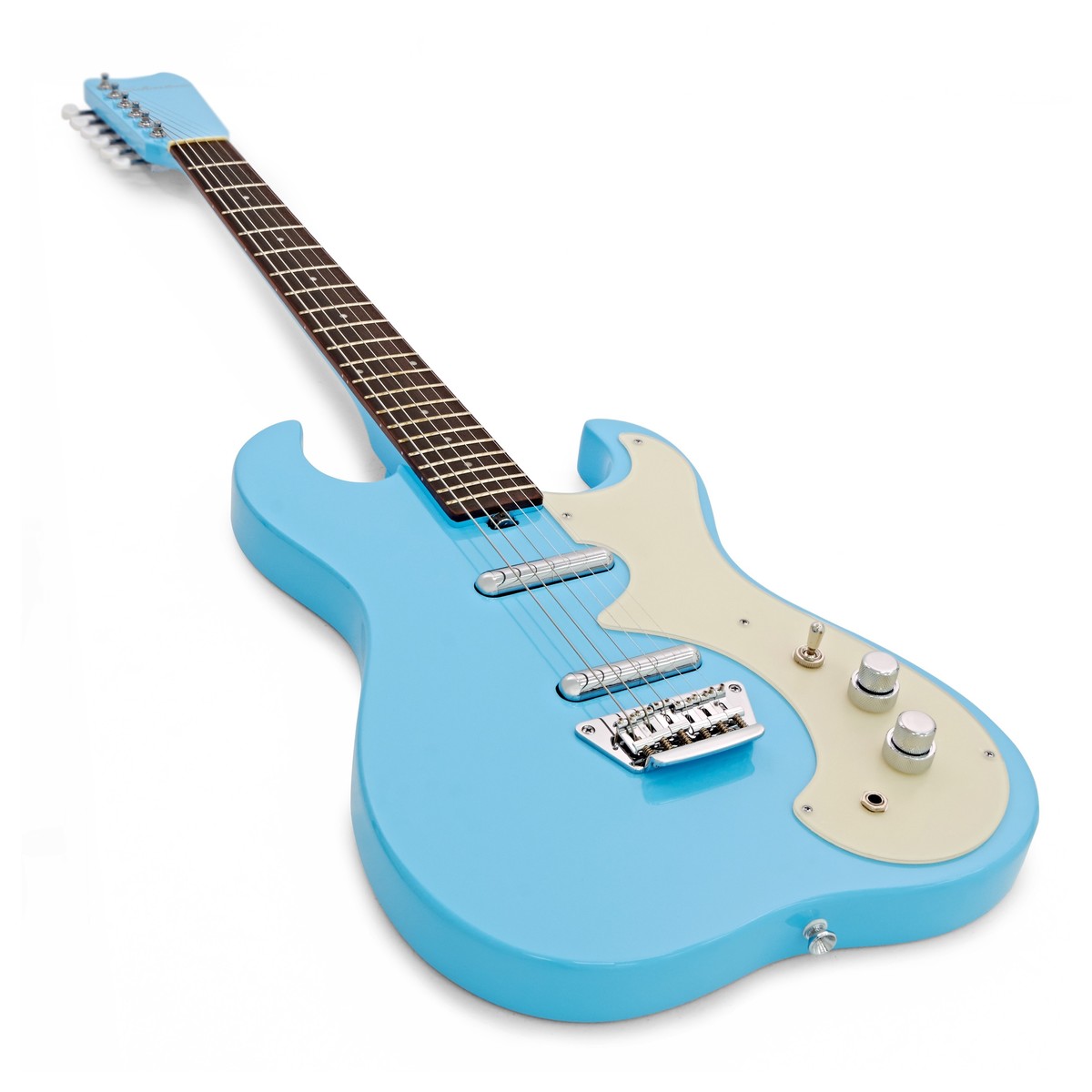 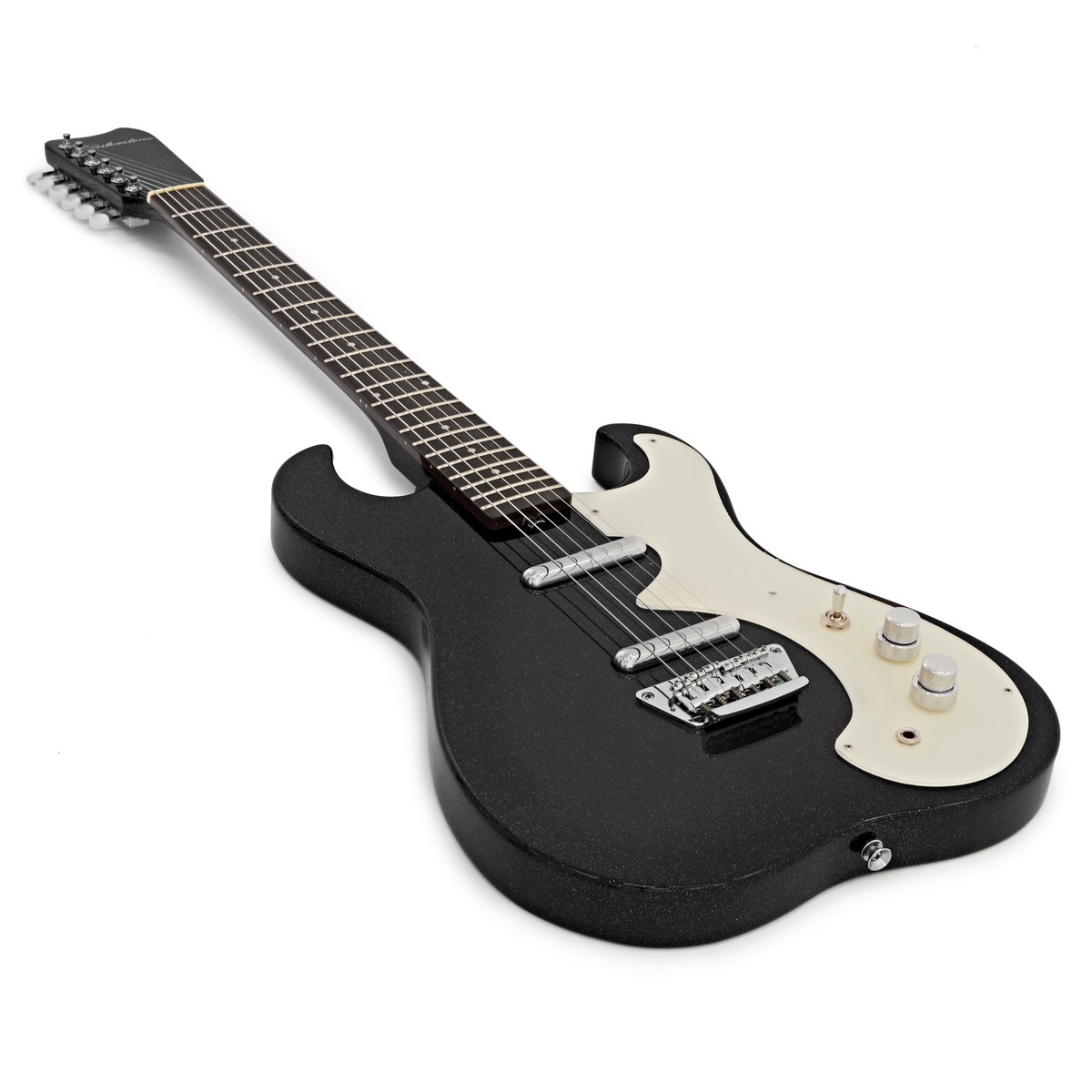 marqueemoon wrote: ↑
Fri May 17, 2019 5:46 am
Oh, and the pickups are a good bit hotter than vintage spec. That’s pretty common for cheap modern lipsticks.

Are the pickups *very* hot? I generally play clean reverby shoegazey stuff. Too hot for that?

Also, out of interest, I know you mention there is a difference in tone compared with a Dano, but are they in a similar ballpark?
Top

marqueemoon wrote: ↑
Fri May 17, 2019 5:46 am
Oh, and the pickups are a good bit hotter than vintage spec. That’s pretty common for cheap modern lipsticks.

Are the pickups *very* hot? I generally play clean reverby shoegazey stuff. Too hot for that?

Also, out of interest, I know you mention there is a difference in tone compared with a Dano, but are they in a similar ballpark?

Not super hot. On par with a typical modern Strat or Tele.

They are in a similar ballpark to a hollow Dano. There’s a little more sustain and the midrange is a bit different.
Top

Will report back here in a few days.
Top

When I got it out of the box, the neck pickup wasn’t working. After some playing around, I realised it was a dodgy switch and I did get the pickup to work intermittently.

Not a big deal really, and I’d be OK with soldering in a new switch. The switch itself actually looked decent quality, made in Korea, so probably just bad luck.

However, the other issue I had was with the tuners. They felt really cheap and low quality and I just didn’t feel like spending extra money on upgrades. I don’t think you should have to do that on a guitar. What happens to the old tuners? Landfill? Seems crazy that manufacturers put cheap and lousy components onto guitars knowing they’ll have to be replaced. And these tuners would have needed replacing.

Other than that, the pickups sounded OK. Quite a bit less “complex” than the G&L MFDs in my Doheny, but being single coil they were in a similar ball park. I didn’t weigh the guitar, but it was very light and quite resonant, must have been under 7 lb. Bridge looked to be decent quality and fretboard was nice and clean. Really quite decent fretwork. Finish felt thick and cheap though, and I’m not keen on a painted neck. Somehow I expect to see wood there.

All in all, if you like the slightly cheap toy-like feel and aesthetics, and have a spare set of compatible tuners lying around, they’re probably a reasonable purchase.
Top

I don't really disagree with any of the major points. I bought mine used and maybe that makes me more accepting of the shortcomings. Tuning issues could certainly be made worse by the crappy plastic nut though, and of course with the 1449 you have the strings exiting the nut at a silly angle on the way to the tuners.

I'd eventually like to get a bit more into modding/repair and these would probably be as good a place as any to start. I think a new nut and switching out the shitty concentric pots for a master volume/master tone setup with a decent cap would make a significant difference for a pretty modest cost in parts.
Top

I like the Danelectro U2 reissue from the 1990's I think. I like the look (surf green in my case) and the fact that it's painted that color all over. The neck feels very nice.

I like the concentric knobs but I didn't like the brown/cream color so I repainted them to solid cream and replaced the pickguard with a plain white pickguard. This made it look like the original Silvertone from the 1960's.

There was no problem with the tape binding but I ended up taking it off. It's strictly cosmetic and is still painted underneath.

The Danelectro U2 in surf green with the changes that I've made is the only model that I like though. I don't like chrome concentric knobs or models without concentric knobs or ones without the "coke bottle" painted headstock. I like the fact that the pickups are wired in series (both p/u selected is louder).