For guitars of the straight waisted variety (or reverse offset).
Post Reply
16 posts

Just delivered by FedEx to my office, haven't really had time to play it yet, but quickly tuned up and it sounds and feels great so far. I've been on the search for a quality acoustic for a while, trying Martins, Taylors, Guilds and Gibsons mostly. I really liked the tone of the J-45s I was playing even though I generally prefer the smaller bodied acoustics. The Taylor's mostly seemed too bright for me, and although I liked a lot of the Guilds and Martins, the J-45 just seemed like the best sounding of all the types. I also think I prefer the 12" radius, where most others were flatter. Any way, here's a pic, although it's quite a bit darker in person than these show:

Actually Larry, as a lurker it was a lot of your posts that made me even look at Gibson guitars. I really didn't want to spend so much, more like $1600 was in my head and the Gibson selection at that price is limited. Once I actually started playing them, I think I just realized if I bought anything else I'd always wish I had spent up for the J-45. Not exactly sure what posts or what you even said that caught my attention about Gibson acoustics, but I kind of have you to thank, haha.
www.littleevilmusic.com
Top

Glad I could help... if it helps any more, I do have a J-35 and a J-15, and those are cool, but if I was going to keep only one it would still be the J-45. That's the all rounder.
Back in those days, everyone knew that if you were talking about Destiny's Child, you were talking about Beyonce, LaTavia, LeToya, and Larry.
Top

If I'd give you some further advice, I pulled the undersaddle transducer from under there, and replaced the stupid plastic saddle with a real bone one, and that opened up the guitar considerably.
Back in those days, everyone knew that if you were talking about Destiny's Child, you were talking about Beyonce, LaTavia, LeToya, and Larry.
Top

Larry Mal wrote: ↑
Fri Jul 19, 2019 1:09 pm
If I'd give you some further advice, I pulled the undersaddle transducer from under there, and replaced the stupid plastic saddle with a real bone one, and that opened up the guitar considerably.

Definitely something I'll consider as I play it more. Mastery and Compton bridges have made a big difference for my Jaguar and Gretsch respectively, so I can definitely get behind something like that.
www.littleevilmusic.com
Top

Give this guy a try when you are ready to make the move, his products are great and inexpensive:

Thanks for the tip, truly appreciated!
www.littleevilmusic.com
Top

I haven't used this, but it looks pretty good:

Thanks Larry, that looks about right. Here's a few more, slightly better, pics of the guitar: 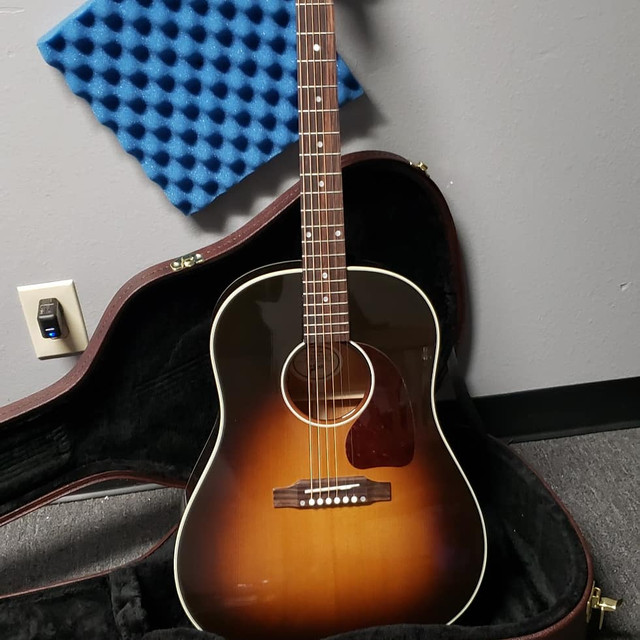 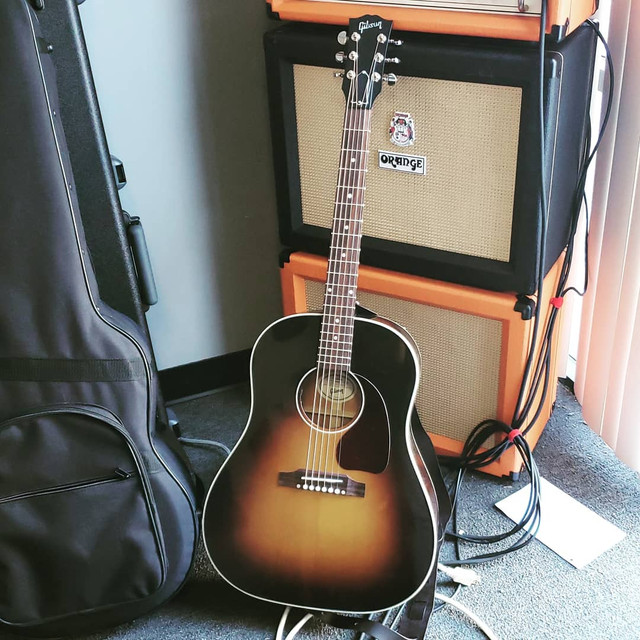 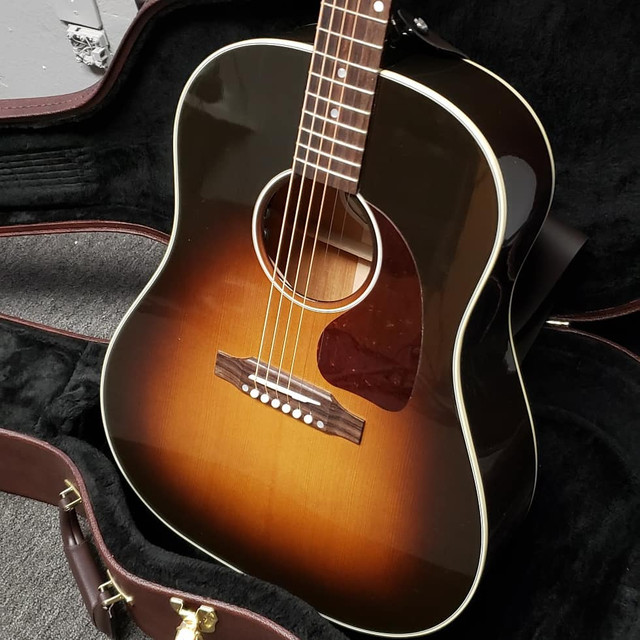 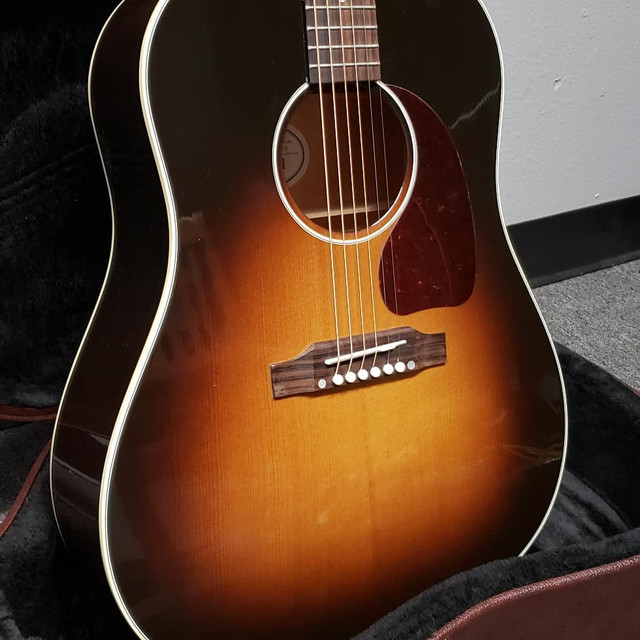 I've been looking at these, myself - old vs new, standard vs studio, sustainable, etc. I've got an early 60s LG-0 that has had all the mods done - replaced plastic bridge, etc, and it does the small-body thing well. But, I want something that opens-up a bit more. Love yours - exactly what I'd get if I bought new. Oh, and this is a Standard, yeah?
Top

So, your LG-0 is ladder braced, rather than the X bracing that you would find on all current Gibsons (and I think on the LG-3 models back in the day). I have no doubt that it's a great guitar but as far as opening up, it'll only take you so far with that bracing.

And yeah, that's a Standard, same as I have, great guitar. I can't easily speak to the old ones very well, but the rest of the guitars you mention you are seeing are walnut bodied guitars.

The J-45 Studio is a walnut back and sides guitar, with a slightly slimmer body, and a 16" neck radius on there.

The J-45 Sustainable has the same depth body as a Standard, but with walnut back and sides and a beeswax finish, and has a Richlite fingerboard.

Gibson is really pushing walnut these days- it's a great wood though, so why not.

And while walnut is a great wood, it doesn't sound the same as mahogany bodied guitars do. Not worse, just different, in some ways maybe even preferable. My J-15 has a kind of rustic and raw sound to it, but with a clear and glassy high end- it's very nice. But, even though it's exactly the same as my J-45 in all specs other than body wood, it does not sound the same at all.

To confuse things further, Gibson also has a new entry level G-45 Studio and G-45 standard, both of which also have walnut bodies and a Richlite fingerboards on the Standard, and whatever a "utile" neck is on the Studio.

There are the other vintage accurate J-45s, though, those would be worth a look, you can step up to an Adirondack top on those sometimes, and they'll come with bone nuts, saddles and bridge pins, and might not have any electronics in them. If money was no object, I would probably take one of those with the Adirondack top over the Sitka, neither is really "better" than the other, though.

I consider the lack of electronics to be a bonus, frankly, I pulled the under saddle transducers from all my acoustics since I don't play out and even if I did, I would not want an under saddle pickup there. I found that pulling that from under the saddle made a pretty big difference in my J-45, less of a difference in my other guitars, still, I want the bone saddle to be resting on the wood of the bridge and not some wire mesh pickup.

From my experience playing them in stores, I would have been happy with one of the walnut variations, and wouldn't say that the Studio is necessarily any lesser as a guitar than the Standard. To me the Standard just had a better sound, very balanced, while the walnut versions were a bit more shimmery bright. I'm not that sensitive to tone, can get on with near any playable guitar, but I also figured if I went with the Studio I'd always wish I went with what I really wanted, the Standard.
www.littleevilmusic.com
Top

The slimmer body depth of the Studio would be enough for me to not consider it in and of itself, I'm sure it sounds fine though for what it is, but the J design is so successful and all around great that I would want to adhere to what I know works.

But I kind of saw the writing on the wall with Gibson and these walnut bodied guitars so I snapped up what seemed like the best of them, the J-15, which I got for $800 so lightly used you'd never know it wasn't new. To me, the J-15 is the winner out of all of them, since it's just a J-45 with a walnut back and sides and no compromises or changes from the most iconic design Gibson acoustics have ever been.

One thing I came to read, though, is some people complaining about the flatsawn backs on the walnut bodied guitars vs. the typical quartersawn. Clearly, Gibson is flaw-sawing at least some of these to show off the nice grain but also to hit the lower price point since flat-sawing is so much more economical.

Still, there's no question that quartersawn wood is much stronger, and I read a lot of people questioning how strong the flat-sawn backs would be over the long term.

I would have kept my J-15 had it arrived with a flatsawn back, but it was with some relief that it arrived with a quartersawn back. So to anyone looking at a walnut bodied Gibson, I'll suggest that you learn the difference if you don't know it and be sure to get one that is quartersawn if at all possible. I didn't know what I was doing when I bought mine, but I got lucky, so I'm just passing that along.
Back in those days, everyone knew that if you were talking about Destiny's Child, you were talking about Beyonce, LaTavia, LeToya, and Larry.
Top
Post Reply
16 posts