For guitars of the straight waisted variety (or reverse offset).
Post Reply
34 posts

Well, the good news is, there are a lot of great Firebird pickup makers out there now. I went with Zhangbucker, the Waylon set in Alnico 5. If I ever get another Firebird, or another guitar that I feel like putting Firebird pickups in, I'll do some Alnico 2s in that one.

That is one hot guitar.

The Zhangbuckers for the Firebird are on my list of guitar related projects.

The problem is that I have 3 G style guitars, and none have traditional humbuckers. The Strat I just bought was originally going to be a SG, and I’m not one to hoard too many guitars. I try to keep around 4 electrics, and currently have 5.

So, the bird may be on the chopping block if I find another Gibson with full sized humbuckers that plays as well as it does. So I’m not looking to throw a lot of money into something that may be temporary (although I’ve had it close to 2 years now).

I may decide to flip my Riviera, but then I don’t have a 335 style guitar. First world problems at their finest. I should just buy a bigger house.
Top

If I had to pick between my Firebird and some Gibson with PAF pickups there's no choice that I would keep my Firebird. Frankly, if that guitar was the only one I could have, I'd be doing just fine.

That being said, I do have a Les Paul Studio with the derided 498/490 pickups, and that is my token double hum bucker Gibson (although I do have a Sonex and a Marauder).

I would like an SG to have yet another double hum bucker guitar in order to have some different sounding humbuckers... I like the powerful 498/490 pickups, but would like something that sounds a little more vintage and clean.

This SG would not have been that one, but I have kids and don't like to keep expensive guitars out and my Firebird rarely gets played (either of them). I might have bought one of these to keep on the stand and have a great sounding easy playing SG at ready hand. Too bad I missed it- actually, it's great that I missed it, me and Mrs. Larry need to buy a house in spring or summer and there's no more money for guitars and I might have to sell a couple.
Back in those days, everyone knew that if you were talking about Destiny's Child, you were talking about Beyonce, LaTavia, LeToya, and Larry.
Top

Ya, kids are fun. Pre kids I’d leave a les Paul or Rickenbacker out in the living room and think nothing of it. Now everything lives in the basement. In its case.
Top

So when I bought it, the natural was already not showing on the website, and it was replaced by the Cherry. I called and asked - and they found two (maybe GC inventory? They are the same company after all), and said it wasn't a problem. They'd sell me the natural - however, since there were only two left, there was a chance that I wouldn't get one if their inventory didn't match (ie, if they oversold by selling the same inventory through multiple outlets GC/MF/Music123/WW&BW + their respective ebay stores). Then I'd get a refund.

This happened to me once many years ago, when I bought one of the Squier Telecasters with a Jazzy neck pickup.

Anyway, long story short.... I got the tracking number today! It's mine!!
Top

Good! That would have been depressing not to get it.

I would like an SG to have yet another double hum bucker guitar in order to have some different sounding humbuckers... I like the powerful 498/490 pickups, but would like something that sounds a little more vintage and clean.

You should try an SG with '57 Classics. I owned a Gibson ES 135 with 57 Classics and I wasn't crazy about them. I found them somewhat unbalanced - either too muffled or to brittle. Then last year I got an SG Standard with '57s, and they sound really great, like they're totally different pickups from the ones on ES 135. The SG has become one of my favorite guitars.
Top

YES....that is a great deal and something you can keep. I love the wood grain.
Top

You should try an SG with '57 Classics. I owned a Gibson ES 135 with 57 Classics and I wasn't crazy about them. I found them somewhat unbalanced - either too muffled or to brittle. Then last year I got an SG Standard with '57s, and they sound really great, like they're totally different pickups from the ones on ES 135. The SG has become one of my favorite guitars.

I'd love an SG, and I don't know exactly what pickups I would put in there.

So, I bought a Gibson M2 (Melody Maker) and put in Burstbucker Pros in an effort to explore the more vintage spec'd PAF type pickups. Sadly, I didn't get a lot of use out of that before I traded it for a Fender Bullet, which I later sold to fund a Gibson J-100.

All good choices, but my original idea was strong and I kind of wish I still had that M2. C'est la vie.

I also fell in love with the Lollar El Rayo pickups when I got to demo them, and I have the idea that I'll one day get a guitar and put those in there. They are very low wind and with unusual magnets and sound a lot like single coils do... wonderful pickups. If I got a Les Paul Standard or an SG Standard I might put those in there.
Back in those days, everyone knew that if you were talking about Destiny's Child, you were talking about Beyonce, LaTavia, LeToya, and Larry.
Top

It's in Miami and should be delivered today. That can only mean one thing... I'm going to work from home today

Pacafeliz wrote: ↑
Fri Mar 08, 2019 11:18 pm
When our Nick Paige was visiting me here a couple months ago, we tried one of these at the MusicStore. Amazing feel I must say and priced to sell.


Was just gunna say that. This guitar ripped when i played one in Germany. And the look is just right! Must admit i'm still very smitten with it.

Any chance it's still there Pat? 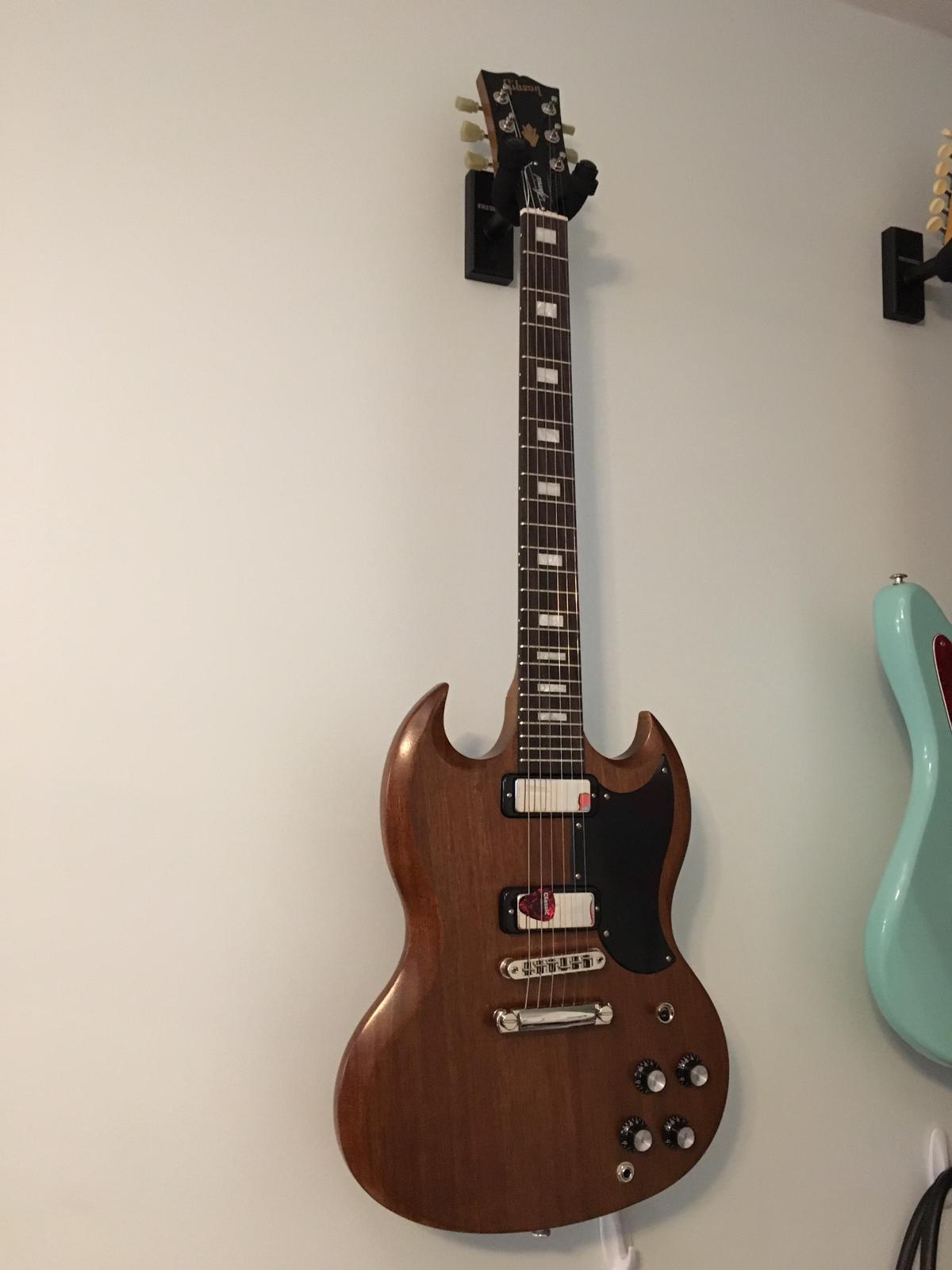 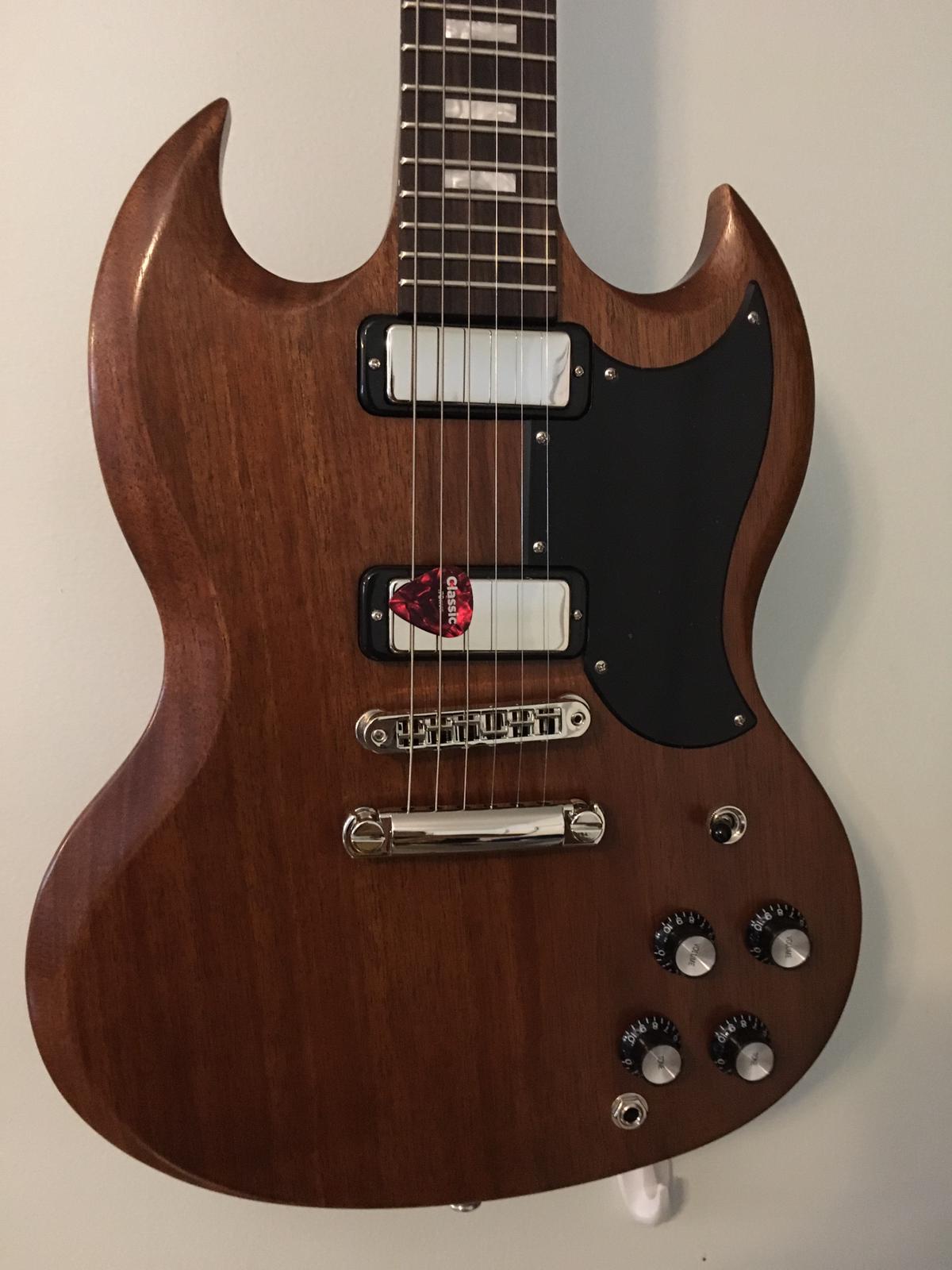 Sounds great playing AC/DC, as all SG's should.

Came with an extremely nice gig bag. I've never had a new Gibson before, so getting a picture of your guitar immediately after it was built included with your case candy was a pleasant surprise. Also like that there is a poker chip in the case candy, as I do plan on adding it.

More thoughts soon, since I've got a lot of work pending for... work.
Top