For guitars of the straight waisted variety (or reverse offset).
Post Reply
13 posts • Page 1 of 1

So, I've been keeping this under my hat, but I've been stalking this guitar for months. It went up for sale at my local Guitar Center in April. I gave it a play and immediately fell in love. It's the best Telecaster I've ever played. Hands down. It has the most amazing woody 3D sound. It's bright but not overly so, and it has the most usable neck pickup sound of any tele I've played. It's a 2012, and from what I understand one of a batch they did for NAMM that year.

Problem being I had no money. Like none. I took a hard look at my assemblage of stuff and decided it was time to bite the bullet and put my 345 up for sale. It was a beautiful guitar that I bought for pretty cheap over 20 years ago, but I just never played it. I told myself when I put it up for sale that there was no guarantee that I could buy this particular instrument with the proceeds, only that it gave me hope that such a great Tele existed and that maybe someday I'd be able to find another as good for that kind of money.

Well, the 345 finally sold, and lo and behold this Nocaster was still up for grabs (as I knew it would be as I stalked it online almost every day)

. As it happened another CS Nocaster came up for sale a few days ago, so with the money from my sale deposited I rolled out to West Seattle to kick the tires. As I suspected it didn't hold a candle to this one. It was a good pound heavier, and while I like a chunky neck it was a bit much for me.

So, off I went to Guitar Center, and a little bit of haggling later it's mine!

There are a few oddities about the guitar in the form of the finish (it's officially Fiesta) and the decal placement (from what I can gather some of the originals have this placement), but the quirks just make me love it more. In certain light it's really pink. It's 9.5" radius as well, which I happen to like. I can generally take or leave relicing, but it's not over the top, and most importantly the back of the neck isn't worn in that stupid, unnatural way. 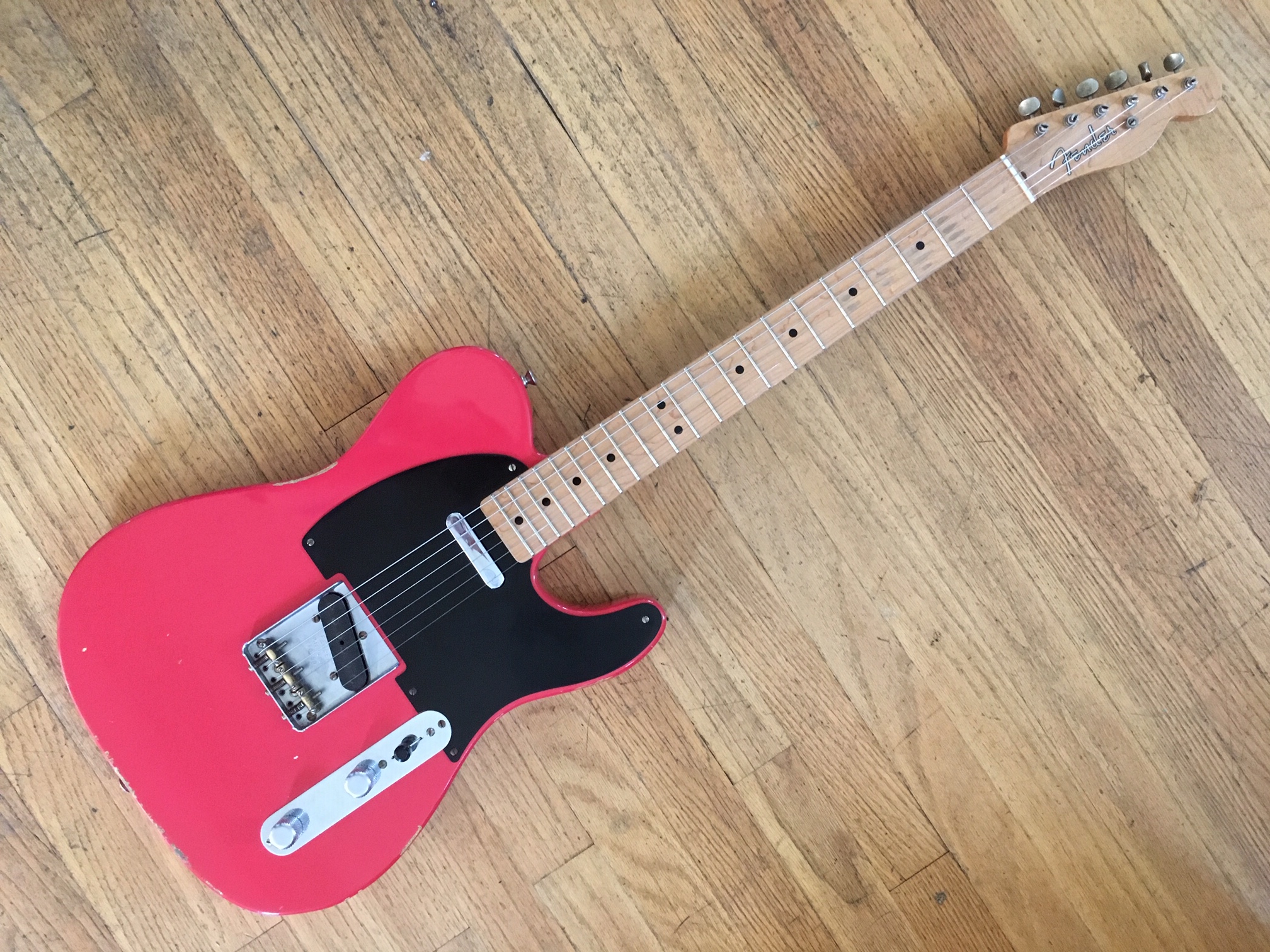 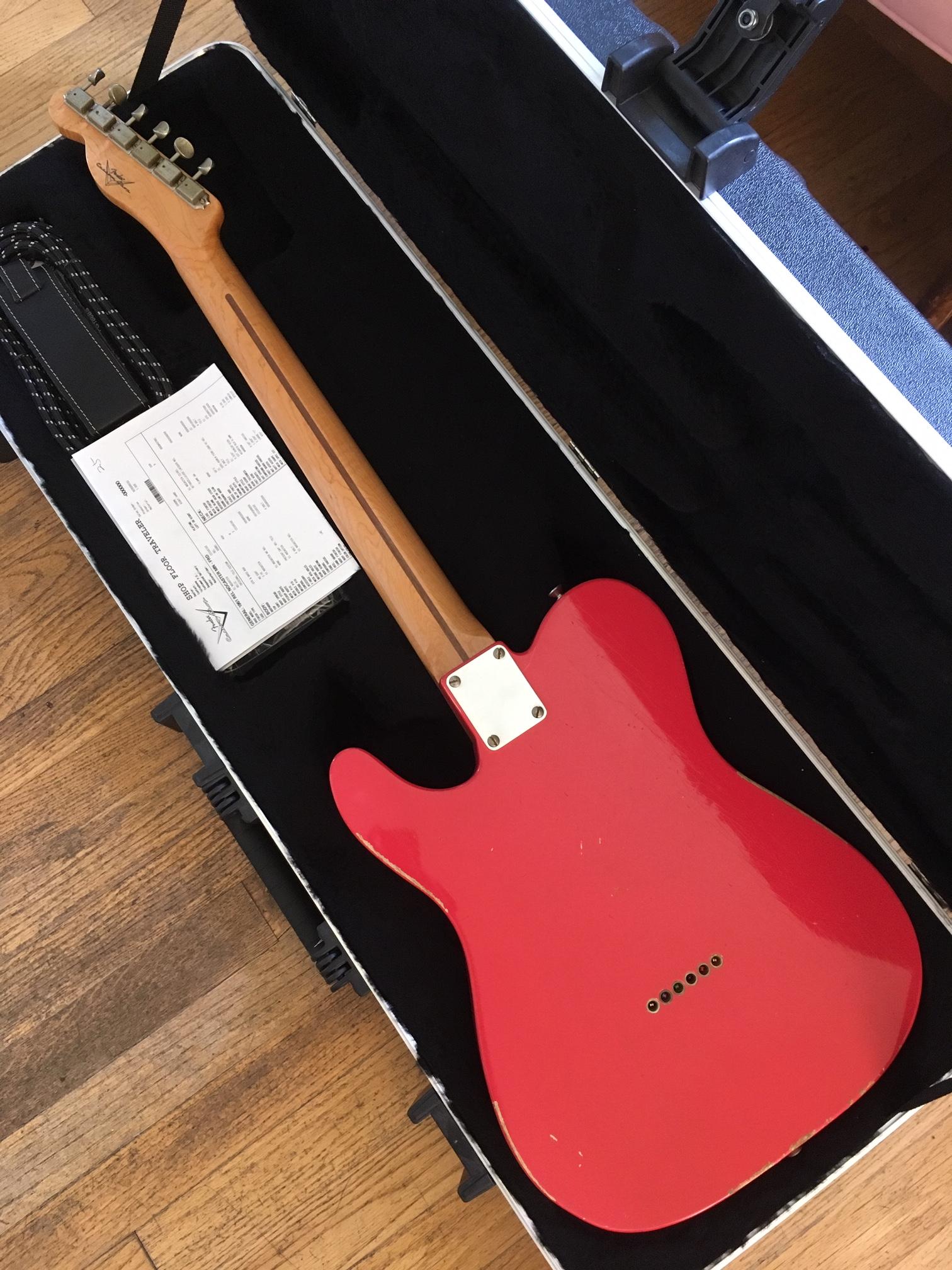 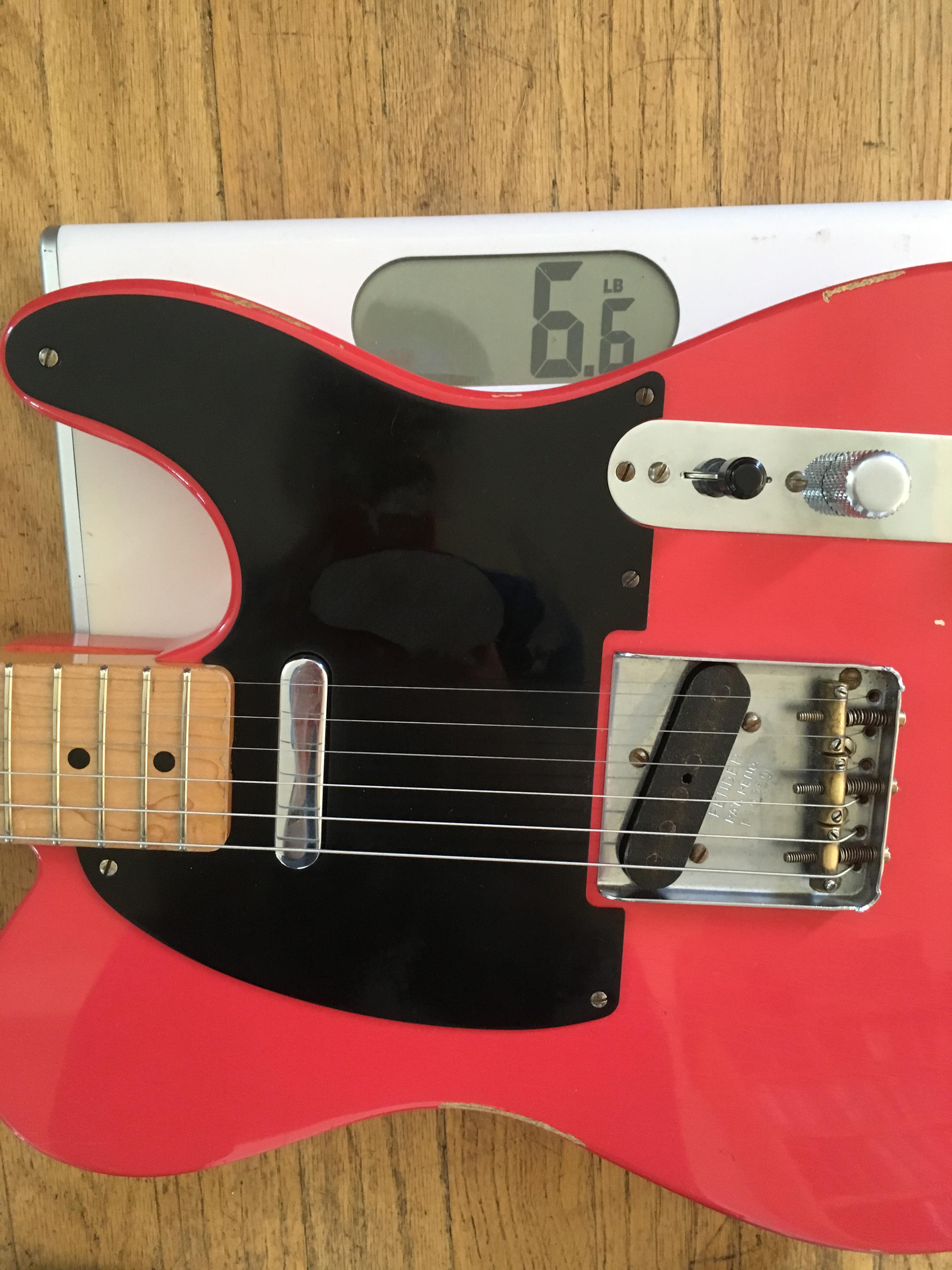 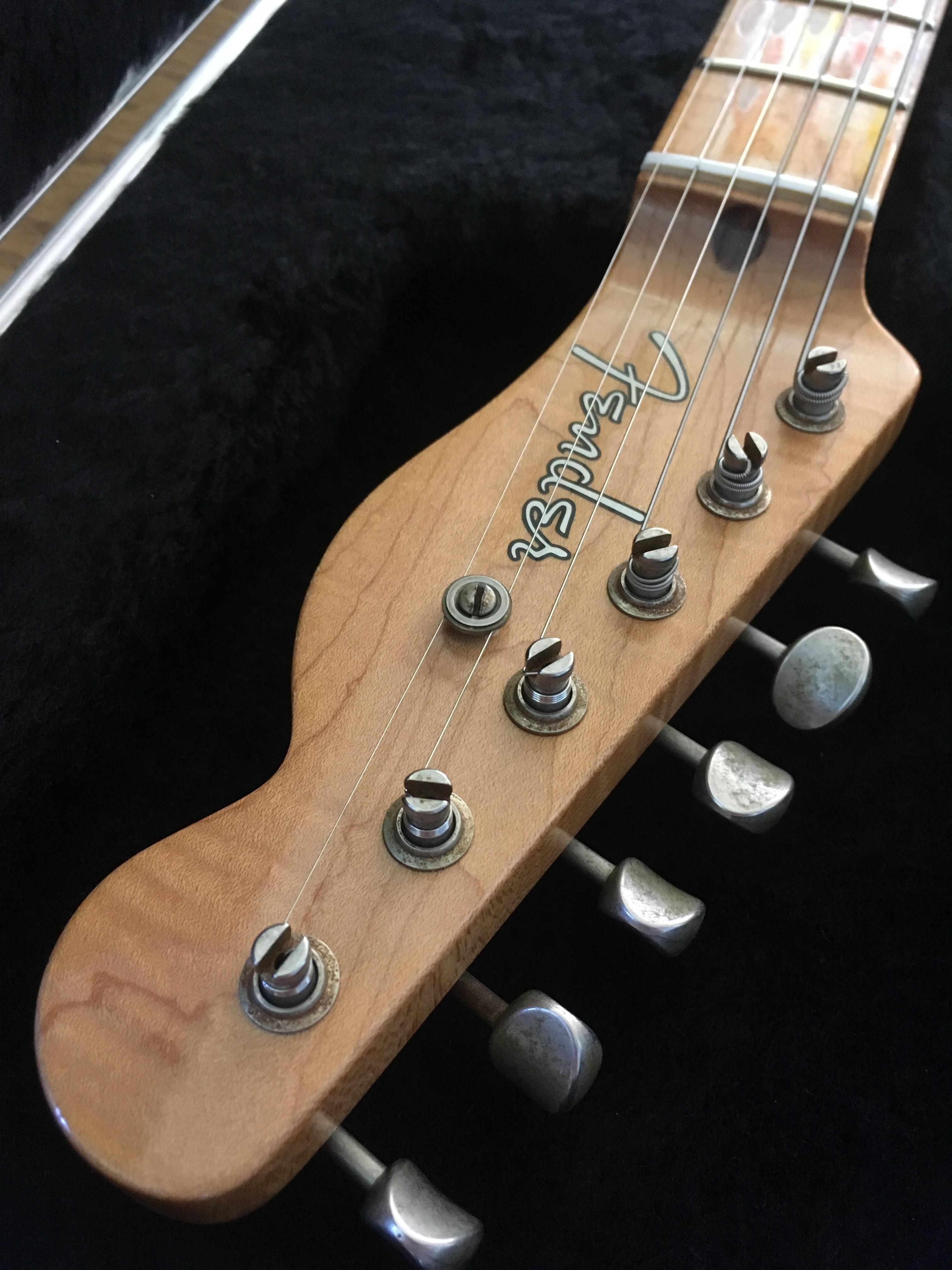 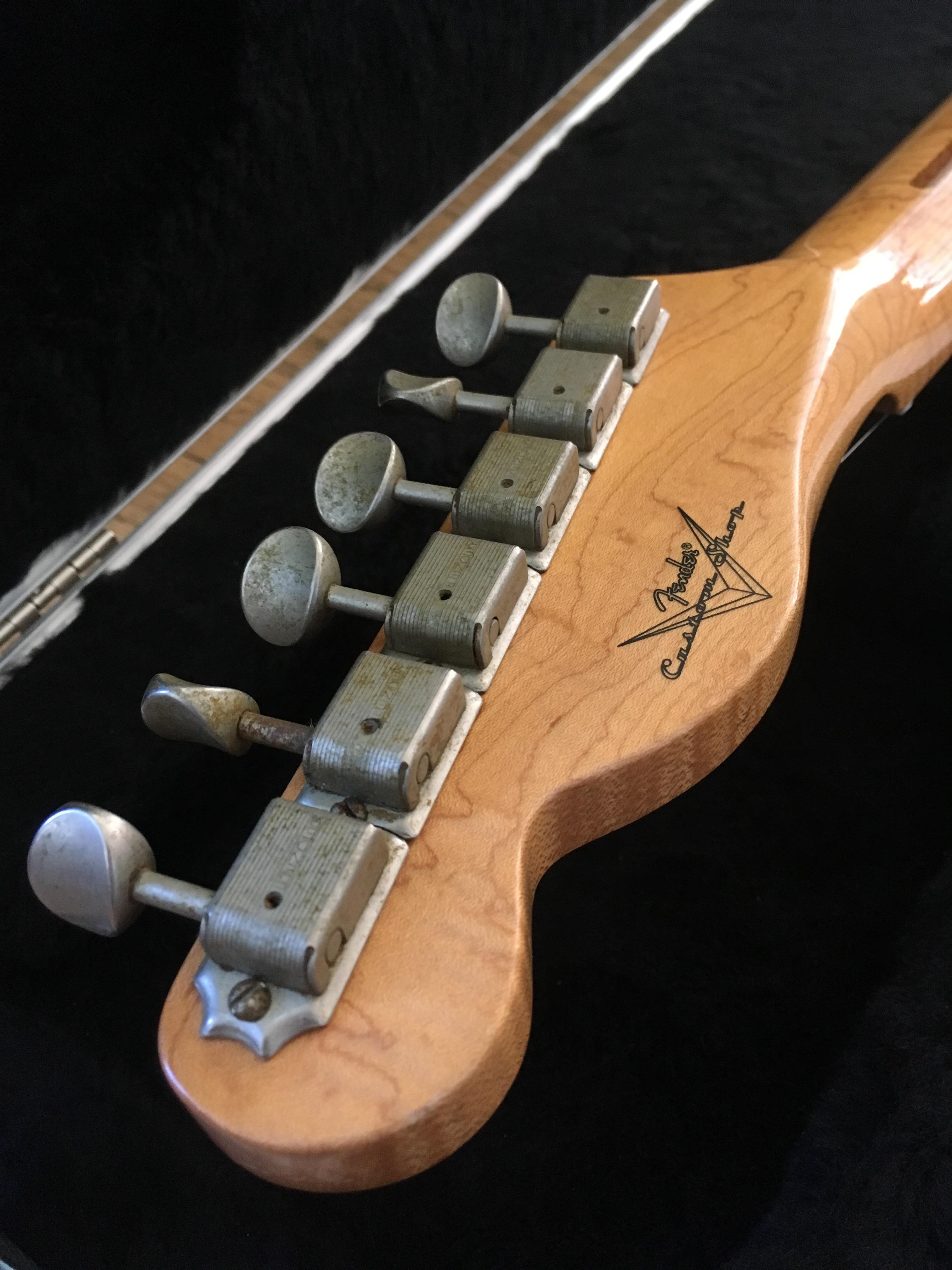 Oh yeah. That's a score you've got yourself there!
Top

This led me to try and weigh my Squier CV Tele. It was a struggle and had to hold the guitar on the scales to work it out. About 9 lbs!!
Top

Is it the same thickness as later/standard teles?
Top

Is it the same thickness as later/standard teles?

Yes, it’s standard thickness as far as I know.
Top

Are those Duncan Antiquities in it? The bridge pickup looks exactly like the DAs I have in my Kelly.
“Now I am quietly waiting for/ the catastrophe of my personality/ to seem beautiful again.”- Frank O'Hara
I am not an attorney and this post is for entertainment purposes only. Please consult a licensed attorney in your state for legal advice.
Top

Are those Duncan Antiquities in it? The bridge pickup looks exactly like the DAs I have in my Kelly.

I think they are the stock Nocaster pickups that were originally installed, but I could be wrong. Whatever they are they sound really nice.
Top

That is a unique and beautiful Nocaster. Good for you for persevering and getting a really special instrument!
Top

Very cool. Great that you were able to compare to a similar guitar.
Congrats. The color makes me want to call it the yescaster...
Top

cestlamort wrote: ↑
Sun Jul 14, 2019 4:41 pm
Very cool. Great that you were able to compare to a similar guitar.
CongratsL. The color makes me want to call it the yescaster...

Thanks. Yeah, it was really nice to be able to compare. Guitars are such individual things.
Top

I had a standard Nocaster (i.e. butterscotch, worn) a few years back ... it was easily the lightest guitar I've owned ... even compared to some ES330s I've had.

I've always loved '50s spec Telecasters ... but I've slowly come to realise that I'm not a Telecaster guy. My friends are all Tele players - and when I play one I enjoy it ... but they don't stick as easily as offsets and ES3xx type Gibsons.

May it give you many happy years of twang!
Top
Post Reply
13 posts • Page 1 of 1