New to the board? Start a post to tell us about yourself and/or learn more about our other members.
Post Reply
6 posts • Page 1 of 1

Honestly I can't believe I only now just signed up for this forum while I've been an offset owner for years!

Here's a picture of some of my offsets:

I'm on the hunt for a Daphne Blue Cyclone II at a reasonable price and a probably vintage Mustang, though I've also decided to build a Cyclone II from templates, I'll be using my original Cyclone to create the templates and I'll likely be painting it shell pink with the competition stripe in off-white, there might or might not be a matching headstock. The Squier Jag has been sold since the taking of this picture but it was replaced by a lacquer model which is lovely.

I started playing guitar around 20 years ago and have always had an even a slight obsession with them. Something alluring with the curves or the exotic pickup selections of various companies. I grew up listening to a bit of surf rock, Elvis Costello, and even a local band who played a heavily modded Jaguar and saw this kind of guitar doing all these different things but not gaining the recognition it deserves alongside the Stratocaster and the Telecaster. Despite the originally intended reason, and maybe just in my mind, offsets felt like for those who took the road less traveled.

Anyway, I'm Rob from Long Island. It's a pleasure to be part of the community, I hope to help contribute as well as gain new knowledge.
Top

Ok, so that is WAY too gorgeous a collection to leave it hidden behind a link. Hit "quote" on my post if you want to see how to embed the image in the thread.

Welcome, you are clearly one of us! 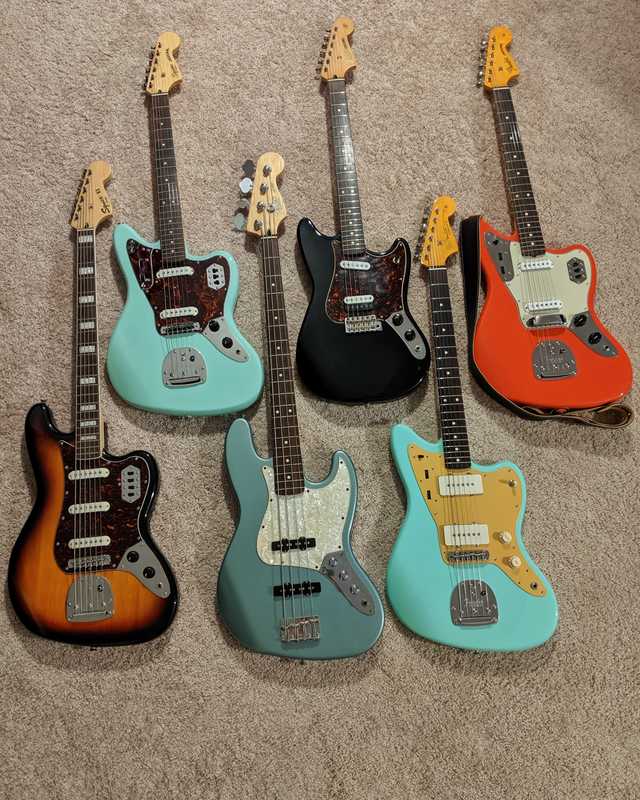 Welcome, you are clearly one of us!

Oh wow I had no idea how to do that, so thank you!

Also, I've basically joined up here because I will be needing help trying to find a reasonably priced Cyclone II. I'd prefer in Daphne Blue but I'm not going to complain. I actually found one earlier today for 500! with shipping it looks like it might cost somewhere around 640. I may have it re-fin'd for nitro in daphne blue if I end up getting it.
Top

Can I just come by to drool on your guitars? No?
Top

Hah! I've since sold the Squier Jaguar and replaced it with a CAR Fender Cyclone II. Please do wipe up when you're done