Talk about modding or building your own guitar from scratch.
Post Reply
12 posts • Page 1 of 1

So, I like the looks of the early-style Musicmasters, but I've never really warmed to the 22.5" scale. I decided to swap a 24" scale neck that I found on a really tortured Musicmaster - actually it came attached to the awful body that ended up getting sawed in half for that black/red Mustang project from a while back!

Ordinarily, I'm very anti-headstock-reshaping, but in this case, the neck had been stained and oversanded, in addition to some sort of hippie woodburning project: First, I tried to sand off as much of the offending stain as I could. It had been stained both black AND red in the past. The neck actually ended up becoming a bit "V" shaped from the sanding!


Here are some pictures of getting the back of the headstock flat - the pencil marks are so I could see my progress. I've wanted to try out a Saf-T-Planer as a way to avoid sanding, to get the thickness of the headstock down to a pre-CBS dimension. It was difficult to keep the cuts even on such a small piece of wood!! The tuner holes needed to be plugged too I did a rubbing to get the outline from the headstock of a 22.5" scale neck I've heard that a CBS headstock can't be turned into a 50's size headstock, but there is actually enough material there Here it is, all done (with a non-appropriate decal from a later Duo-Sonic!) Can you tell me how you get that perfect aged look on the headstock? It's very, very, V E R Y tasteful.

i have to say, i was totally not on board initially.
I kinda loved how ridiculous that headstock was, and have never seen a successful re-shape.

but,
it looks fantastic. really nice work on the whole thing (although the safe t planer part was scary. i've seen them launch small projects)
(Christopher, also)
I've been to one World's Fair, a picnic, and a rodeo, and that's the stupidest thing i ever heard come out a pair of headphones.
Top

Holy shit, this turned out great! Very nice work on finishing the headstock, indeed.
Judging from one of the pics, the back of the neck was stained (or at least partly sanded) as well, right? Can we have a look at how that looks now?
indulj már, hé / embermlék / önmagától gyulladó fény!
Top

Whoever it is you use for hosting always loads up really slow for me.

I always want to see your threads, but usually end up giving up because of that.

Beware of for sale ads advertising Fender Squires, usually they're neither... and remember.. Say NO to relics!
Top

Amon 7.L wrote:Truly great work, Will!!!
Can you tell me how you get that perfect aged look on the headstock? It's very, very, V E R Y tasteful.

It's just some ReRanch tinted lacquer. I've found that if I spray a few coats of clear first to seal the wood, the tinted lacquer goes on more evenly since it doesn't get absorbed into the grain. The ReRanch stuff is a bit more yellow than naturally aged lacquer, but waaaay closer than the stuff from Behlen. ...,I actually used the Behlen stuff to turn an aluminum pickguard into one that was gold colored since there was so much pigment in it.
Top

mothershipzeta wrote:Holy shit, this turned out great! Very nice work on finishing the headstock, indeed.
Judging from one of the pics, the back of the neck was stained (or at least partly sanded) as well, right? Can we have a look at how that looks now?

I'll snap some pictures in a few days - when the fog lifts!
Top

Nice work. Looks convincingly original. Why was it necessary to plug and redrill the tuner holes?
Top

Horsefeather wrote:Nice work. Looks convincingly original. Why was it necessary to plug and redrill the tuner holes?

I needed to make the holes small enough so that the bushings wouldn't fall out, and I wanted the posts to fit snugly on the back, like the original Kluson drilling. I might try something different in the future, since the wood on the bushing side of the plug gets so thin that a lot of it just flakes away.
Top

I had a sunny day here, so finally a chance to take some better pictures - though I don't think it is quite easy to show neck shape in a picture: 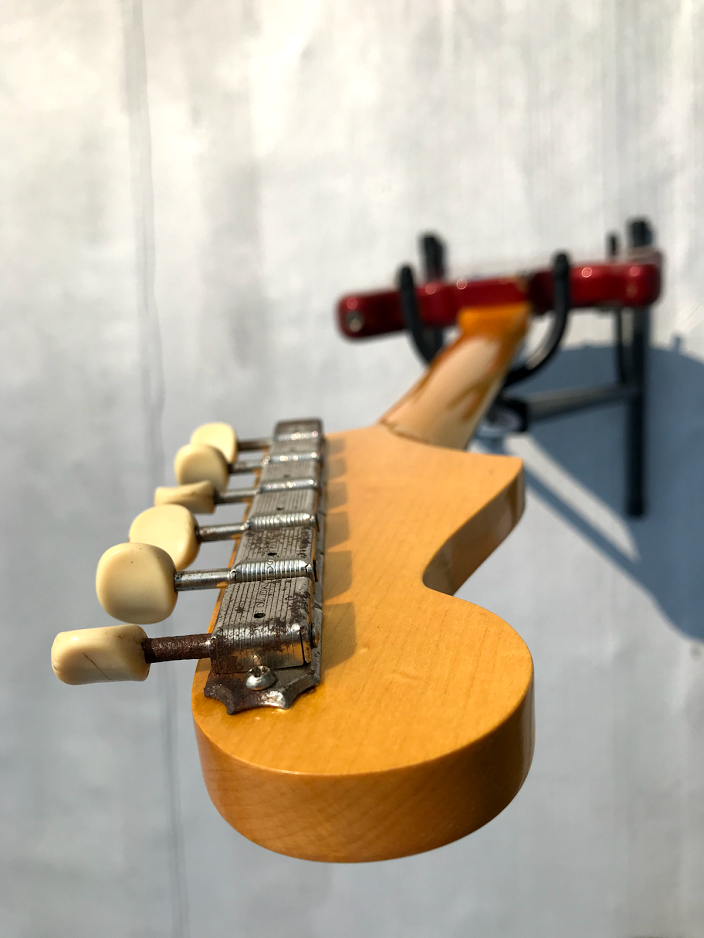 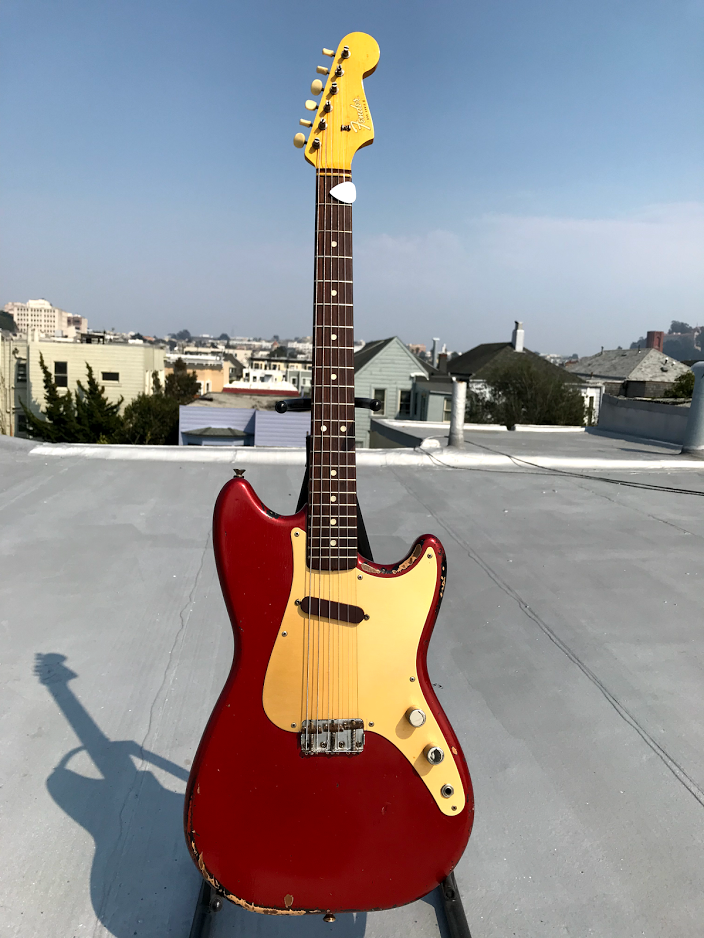 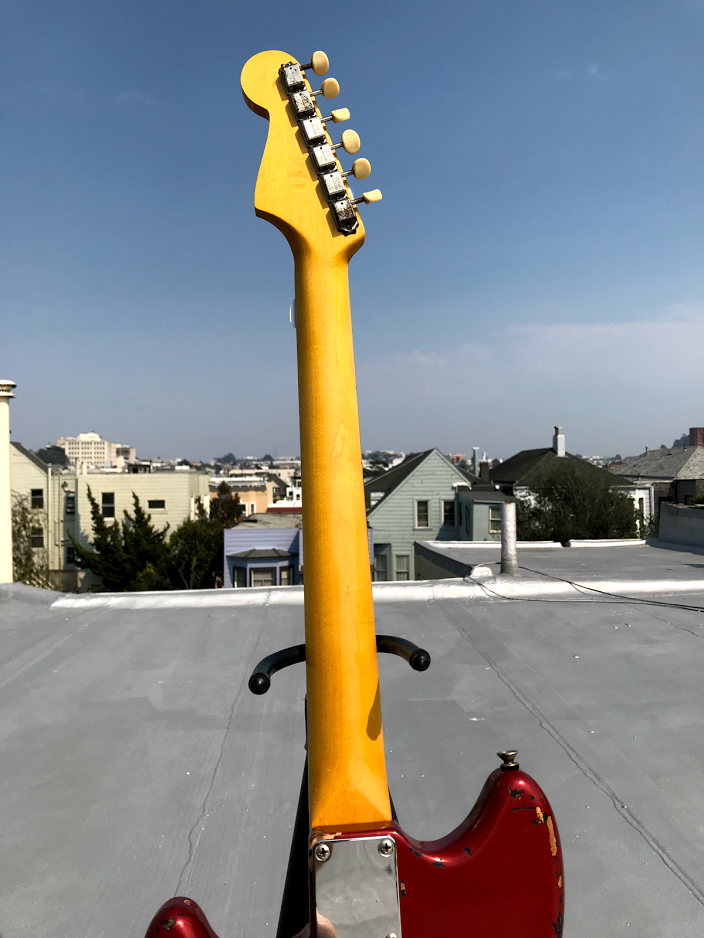 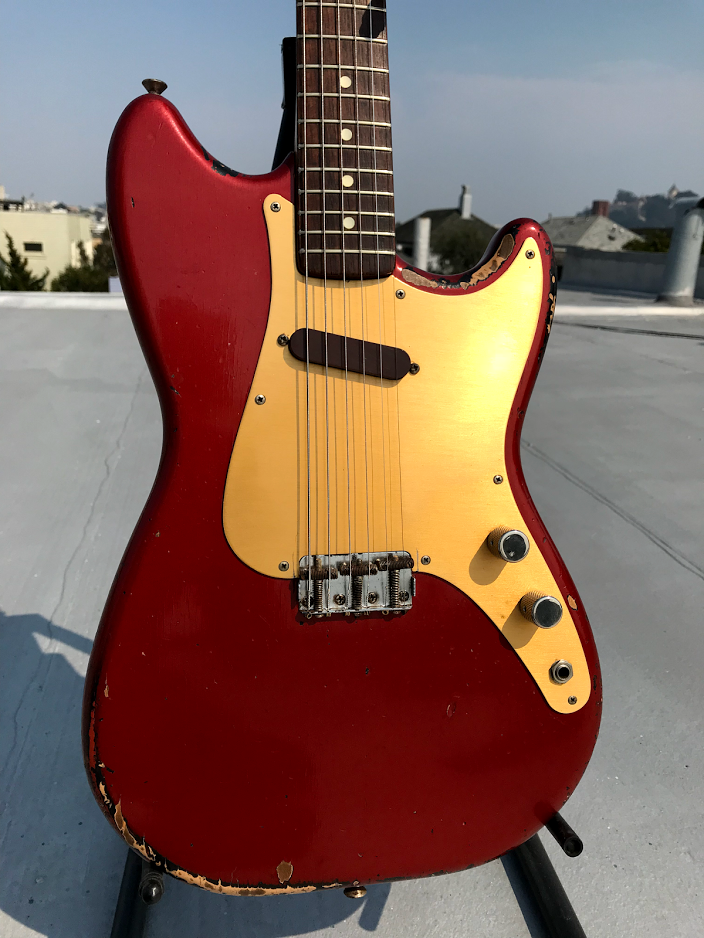 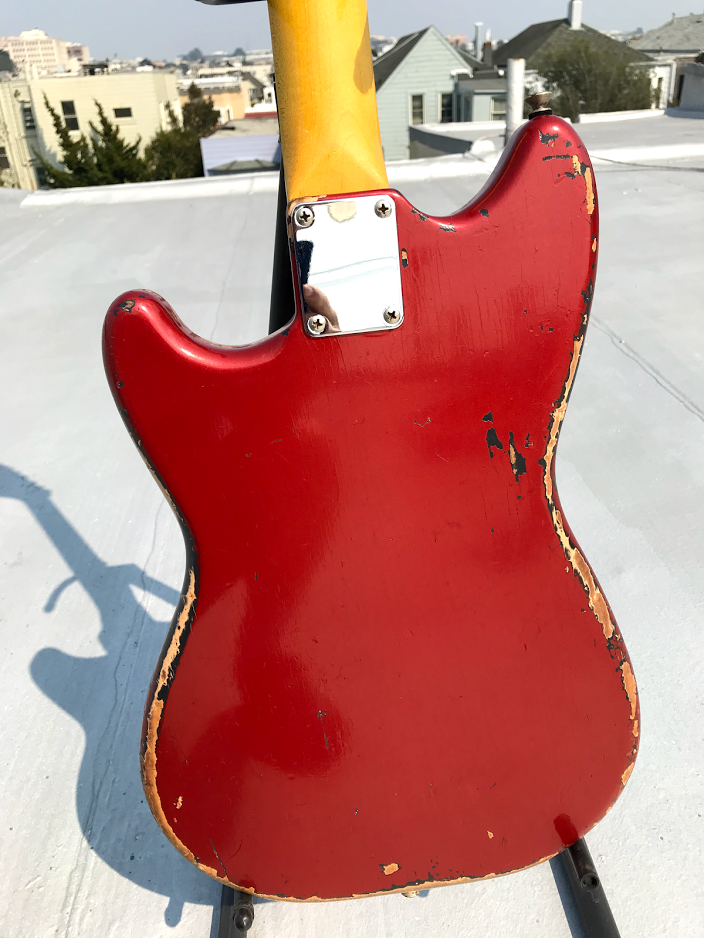 That is beautiful. Great work.
I finally finish building a guitar, go to play it, and then remember, "oh yeah, that's right. I suck at playing... Why did I build another guitar again?"
Top

Great photos, there. This definitely looks like it's a guitar that "could" have been.
Top
Post Reply
12 posts • Page 1 of 1