So this guy just came back today from a spa month at Rootbeer Audio in Philly (highly recommended for local folks), fully in fighting trip, so I'm going to count it as 'new' even though I actually picked it up in back in April. 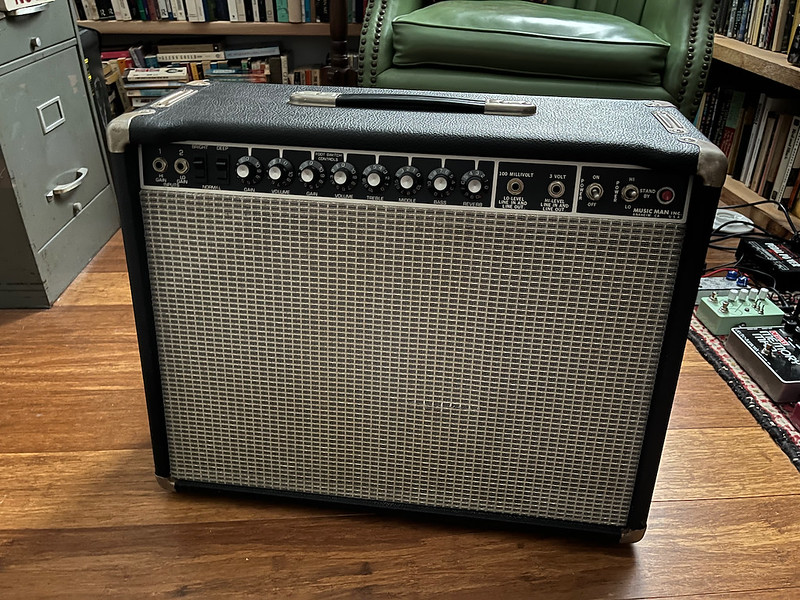 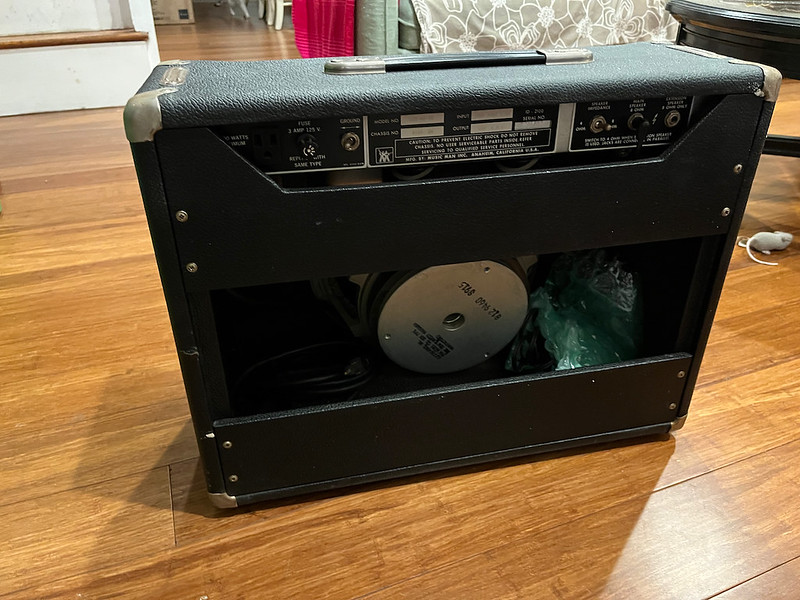 I managed to convince a Sam Ash store in Tuscon to ship it another store in South Jersey and not charge me for that, so I was able to just swing by and pick it up. Somewhat amazingly, it survived the trip (though credit to the Sam Ash Tuscon guys, it was VERY well packed). Basically, it was working when I got it, and happily bopped along as an office amp for a couple months before Matt had space to go over it. It had what we figure were the original Sylvania 6CA7s, and all the original caps inside. The tubes were still good, but old, and these amps are hard to bias and it has to be done by someone who knows what's what, so it got new tubes. A bunch of the big caps were already bulging, and some others were old enough to be worrisome, so we did also did a pretty complete cap job on it, with new Spragues and F&Ts. 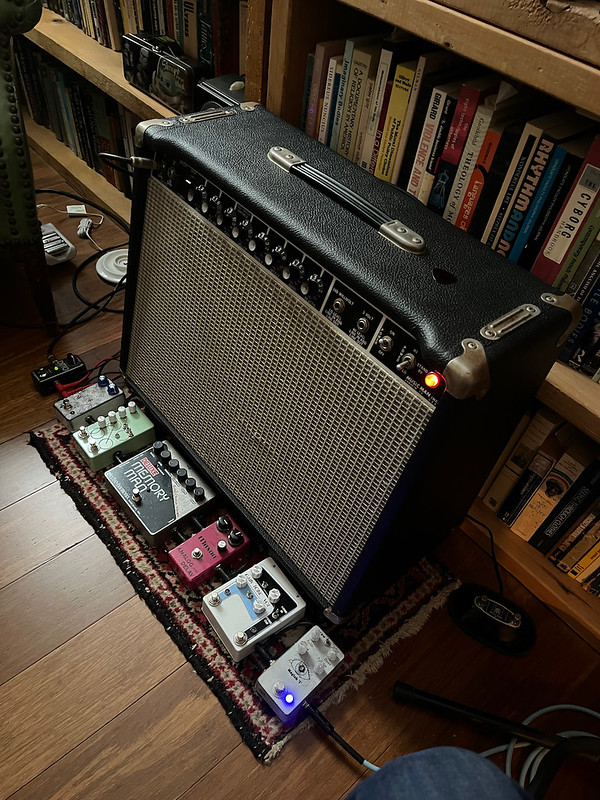 Result?: glorious. When I first got it, it sounded good, but things like the bright switch were just unsuable. Now, just clear, beautiful clean tone, a perfectly usable overdrive on the regular channel if you turn up the gain a bit (though I usually use pedals for that, and will with this). I haven't messed with the 'disortion' channel yet, but I was largely ignoring it before. If I get some late 70s post-punk solid state distortion weirdness out of it, I'll count that as a bonus, but I wanted this as a clean pedal platform and it's phenomenal for that -- especially with the EV.

The reverb is really quite nice too, so all in all I'm very happy especially as even with an extensive service, I still have less than a grand in it.
Top

Great score, congrats! I love the distinctive personality this era of hybrid amps has. And, y'know, the volume.

Thanks. It's a wild amp. As my tech was saying, not squishy at all--but you can get all that from pedals. What it does brilliantly is reproduce every single nuance of the guitar, pickups, and playing technique and whatever signal processing you throw at it. And yeah, the volume is bananas -- I cannot honestly imagine some of the bigger ones: the 100s and 130s. I will never even stretch this amp's legs on that score, I'm sure. Not sure how much its previous owners did either, given that it survived 40+ years in more or less working order with the original caps and tubes. But the gain / volume setup makes it very easy to dial in a tone at a perfectly acceptable playing volume. So it's actually perfect for me.
Top

Yes! "Not squishy at all" is exactly how I'd characterize my experience with amps like these. Since I play stuff other than "traditional" rock, that's a real nice trait to have sometimes. I don't have the space for one, but a Music Man sounds like it might be my kinda thing, too.

And I hear you on the volume thing. I don't know if my Peavey hybrid ever went above "6" on the master for the years I was gigging it in an obnoxious loud n sloppy punk band, and the RCA and Sylvania tubes are still humming along nicely in my bedroom for ambient deedles.

Good to hear the recap was a good move, I've been thinking about saving up to do mine, and posts like yours only spur me closer.
Top

I had a 112RD50 with an EV speaker years ago. Great sounding amp and ungodly fucking loud. I was playing in a band with another guitarist, bassist and heavy handed drummer and I never turned it past 3. I was playing an esquire with it and it just cut through every single mix. I really miss it.
Top

MrShake wrote: ↑
Fri Aug 12, 2022 3:44 am
Good to hear the recap was a good move, I've been thinking about saving up to do mine, and posts like yours only spur me closer.

As always, half the battle is finding a really good amp tech. I'm really blessed to know a couple folks who can and will give super reliable pointers of this sort and it has made so many things with vintage gear go better. But assuming you've got that covered, I'd say do the recap. This one was quite functional, but things had drifted enough that aspects of it weren't great (and in retrospect I'm having a lot of 'oh so *this* is how it was supposed to sound' moments). I did it b/c I didn't have a clue about the amp's history and didn't want it to melt down on me one day. But what I got was not only something I trust but a jump from 'good amp' to 'oh my.'


Jonesie wrote: ↑
Fri Aug 12, 2022 6:48 am
I had a 112RD50 with an EV speaker years ago. Great sounding amp and ungodly fucking loud. I was playing in a band with another guitarist, bassist and heavy handed drummer and I never turned it past 3. I was playing an esquire with it and it just cut through every single mix. I really miss it.

Yeah oddly the first thing that I can remember making me start looking for these was seeing (I think it was) Taiwan Housing Project using a couple at a tiny little place in North Philly a few years ago, and it was this perfect no wave combination of brutally in your face and very clean and jangly-crashy. Cutting through every mix was a big part of it. And yeah, this amp loves the bridge pickup on my Tele.
Top
Post Reply
6 posts • Page 1 of 1