by Zork
So, I'm playing my Bass VI in a 70s inspired rockband and I'm using a Laney 50 Watt head with my old Kustom 6x10" bass cab. The rig sounds great, but lacks a bit of the top end. So I thought I might just add another cab that goes well along with the Kustom.

I have this Allsound 1x15" cab standing around forever. I've used it in every band I ever played in, but it never sounded particularly good. It was often used just because it was available. So I decided to mod it a bit and make it a 2x12" (excuse the blurry pics, lighting in my practice space is terrible): 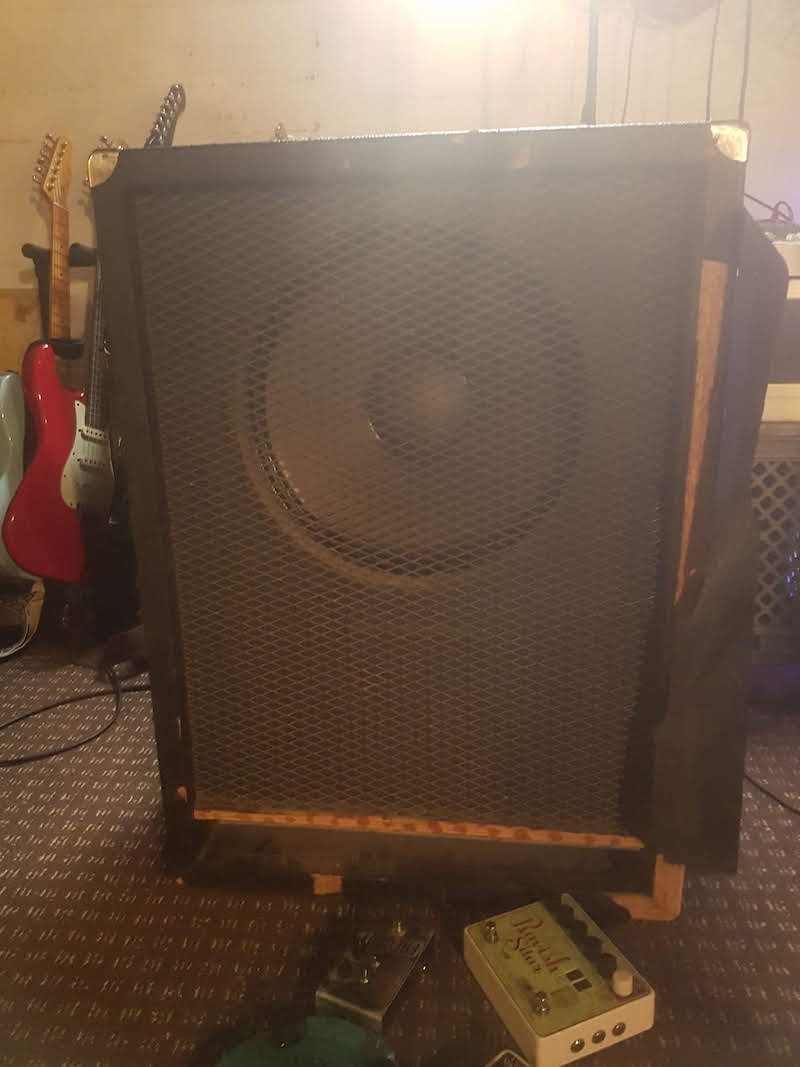 The plan is to use the back as the new baffle, cut out the holes for the speakers, cover the baffle with a nice blue canvas I have around and wrap the cab in a seafoam green leatherette.
The dimensions are nearly identical to the Zilla Super Fatboy btw, so I think it'll make a pretty decent cabinet. Just like the Zilla, I plan to make a part of the back detachable, so I can use it either as a closed or as an open cab.

I started by pulling off the old tolex and disassembling the cab. 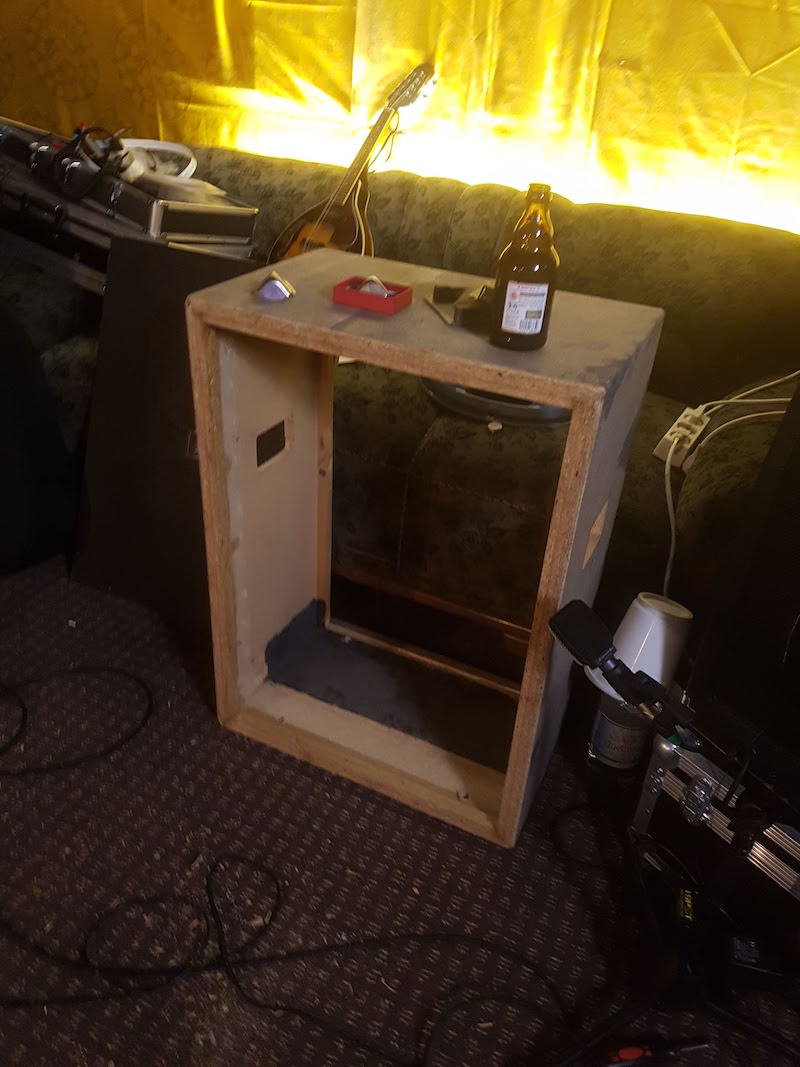 I also got the speakers in the mail yesterday. I bought some second hand "Special Designed For Fender" speakers from a Fender Frontman 212. They were cheap and the guitarist of my old band had one of these amps, so I knew what I was getting. I always thought the clean channel sounded really good in these amps, so I was a bit surprised when I found out that everybody on the internet hates the speakers. So I went to youtube and found this video: https://youtu.be/pcl2XwFiwgA

I can see now, where all the hate comes from and I'm amazed on how different these speakers sound compared to all the others. But it looks like they deliver exactly what I'm after: A shitload of high frequencies. In combination with the relative big enclosure and the relatively bassy 6x10" Kustom, I think it'll make a good sounding rig. Anyway, here are the speakes: 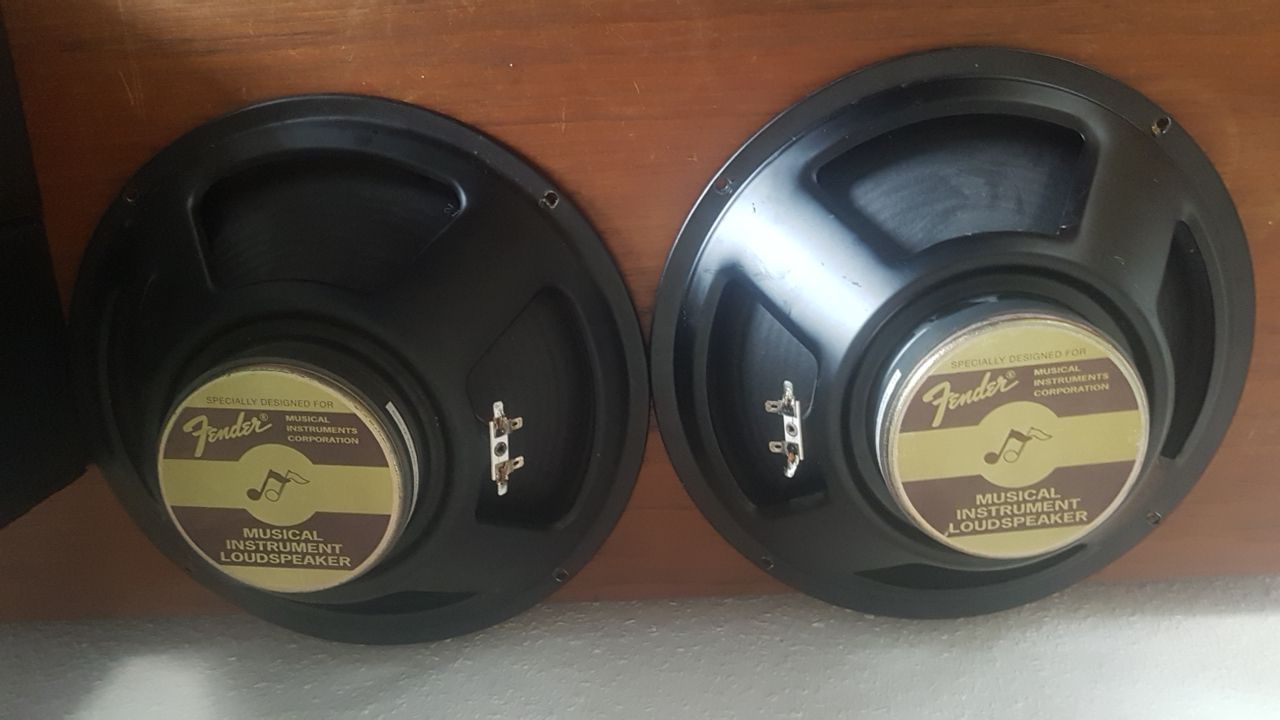 Next up is sanding and glueing on the leatherette.

by Zork
As my bandmates couldn't come to bandpractice I had much more time yesterday than expected and got the cab almost finished. 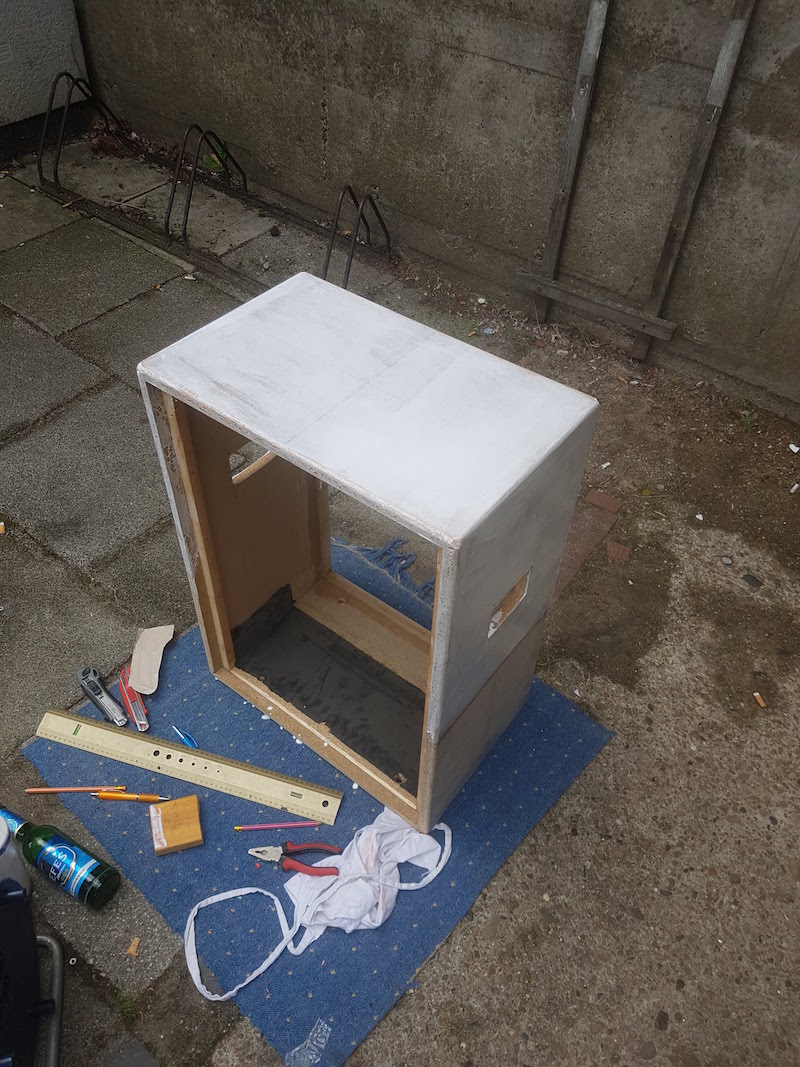 I then put on the leatherette. This was my first try and I failed miserably. First, the glue was way to wet. I completely srewed up to cut the corners and finally had much too less of the leatherette wraped around the insides of the cab. I also didn't have my staple gun at hand because I didn't know I would need it. To cut a long story short: I had to start all over, but this is how my first attempt looked like: 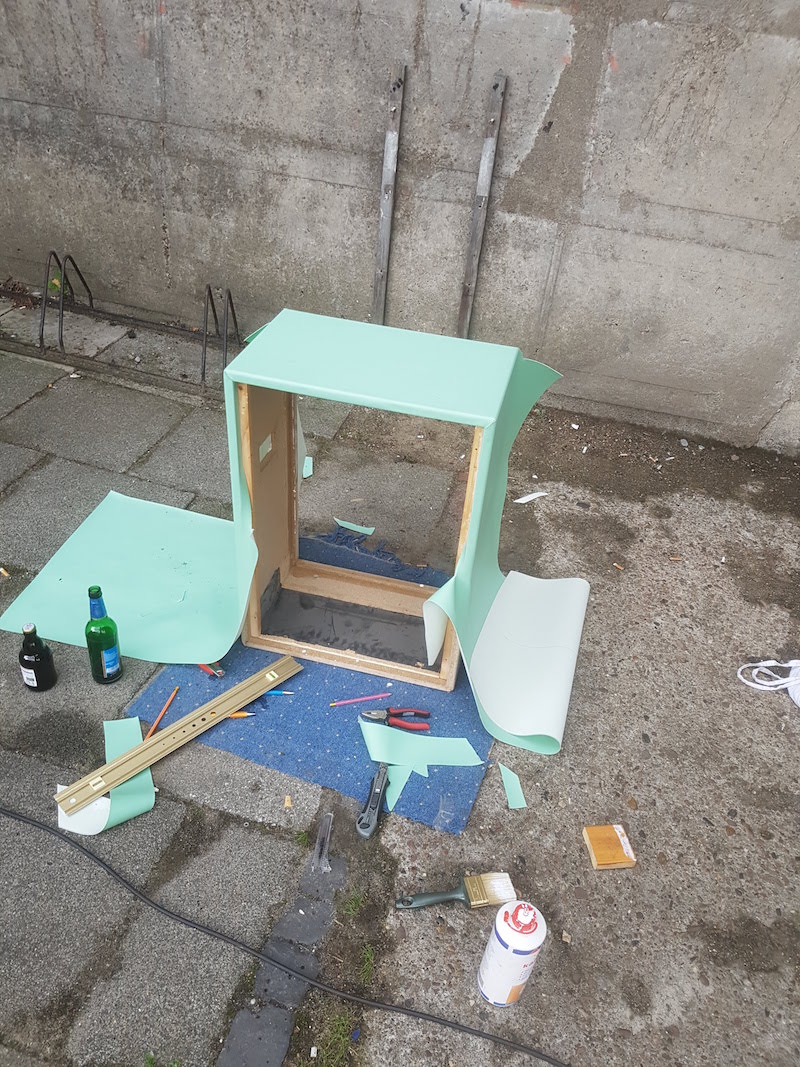 Second try worked much better. I used more glue, let it dry longer, wrapped the leatherette deeper inside the cab and used lots of staples to really fix it all together. I also refined my technique at cutting the corners. I didn't take pictures during the process but here's the result: 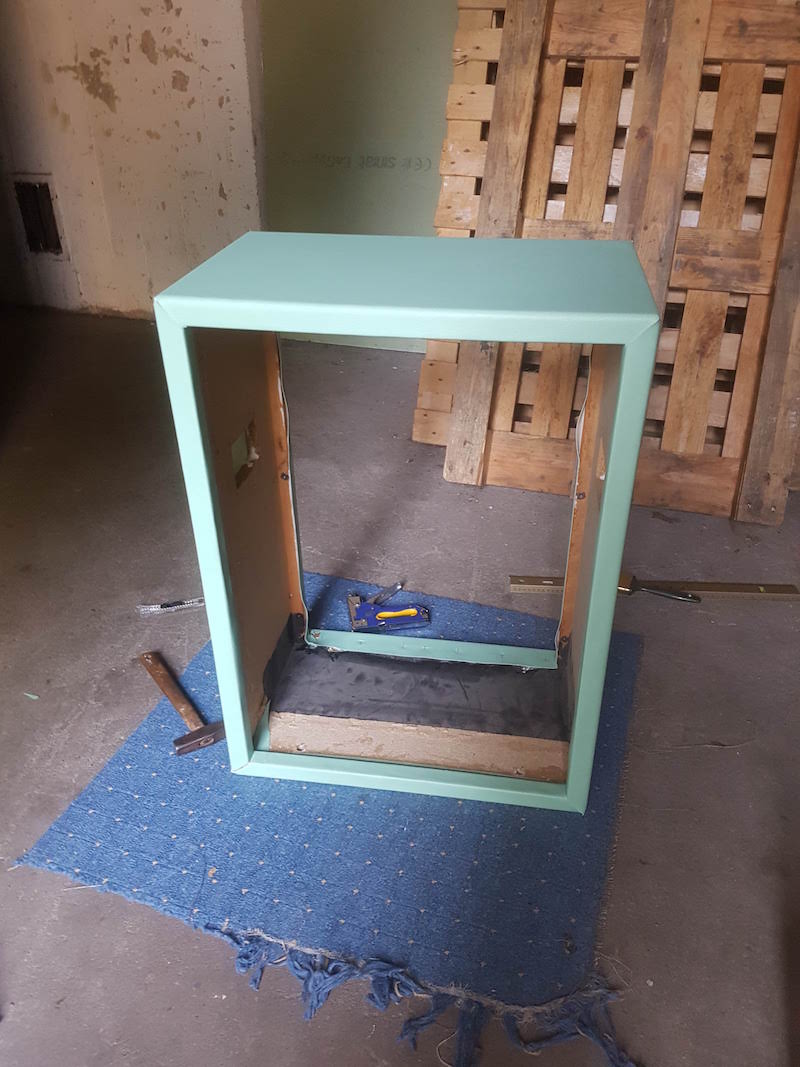 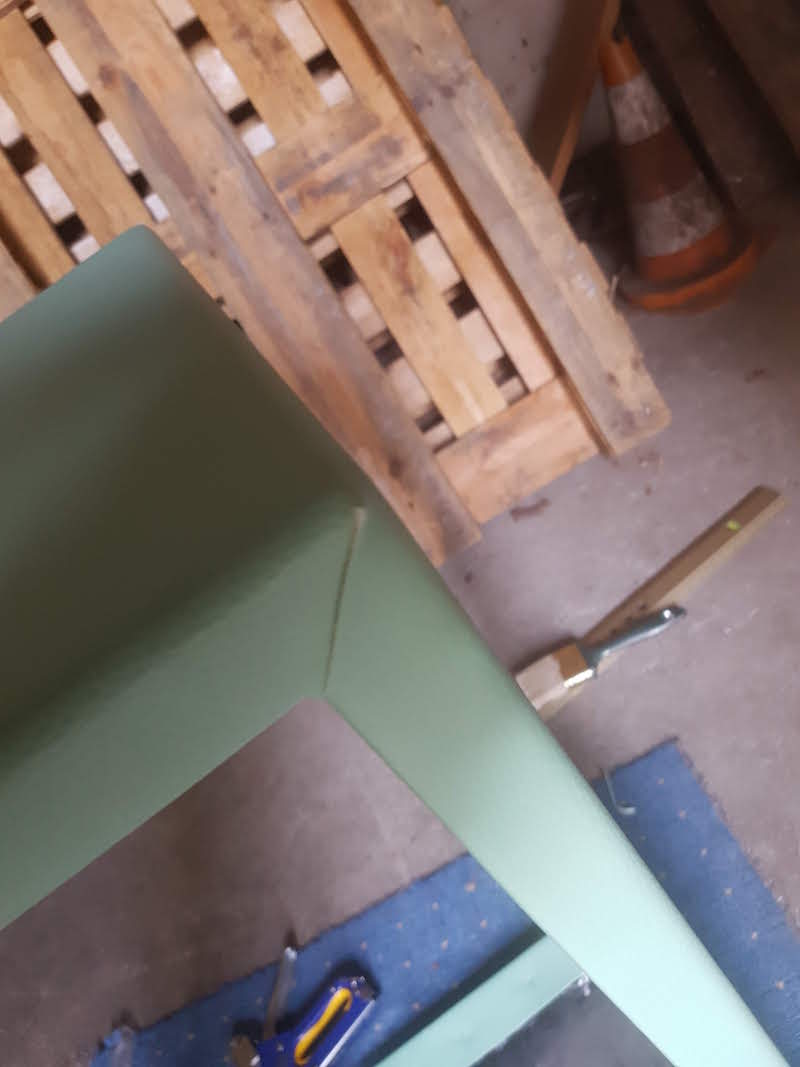 To be honest: It looks good from a distance but it's still far from from perfect. Especially the seam and one of the corners on the front side show that I'm really not experienced in that kind of work and there are still a few places where you can see that the wrap doesn't stick to the cab. Still I'm quite pleased with the result. For a first-timer I did pretty well and the overall look is ok. The rest shows the "true DIY spirit"...

Next up was to cut the holes in the front baffle, put the canvas on and assemble the box. I installed the handles as well. 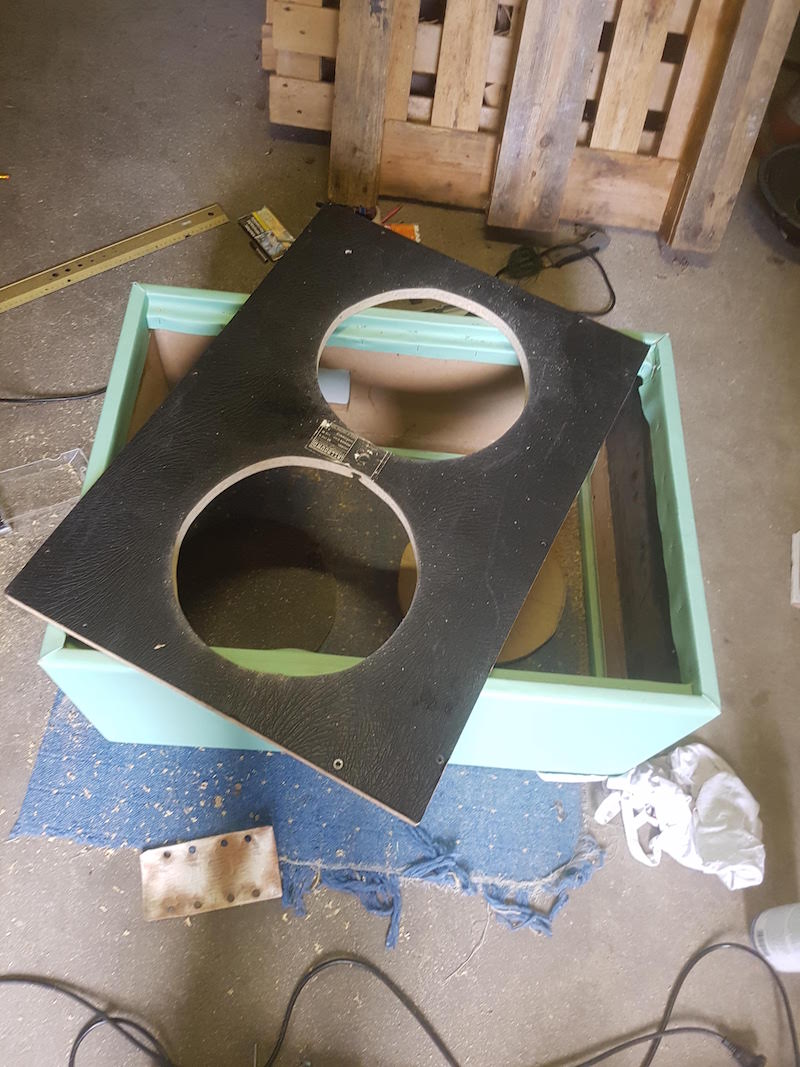 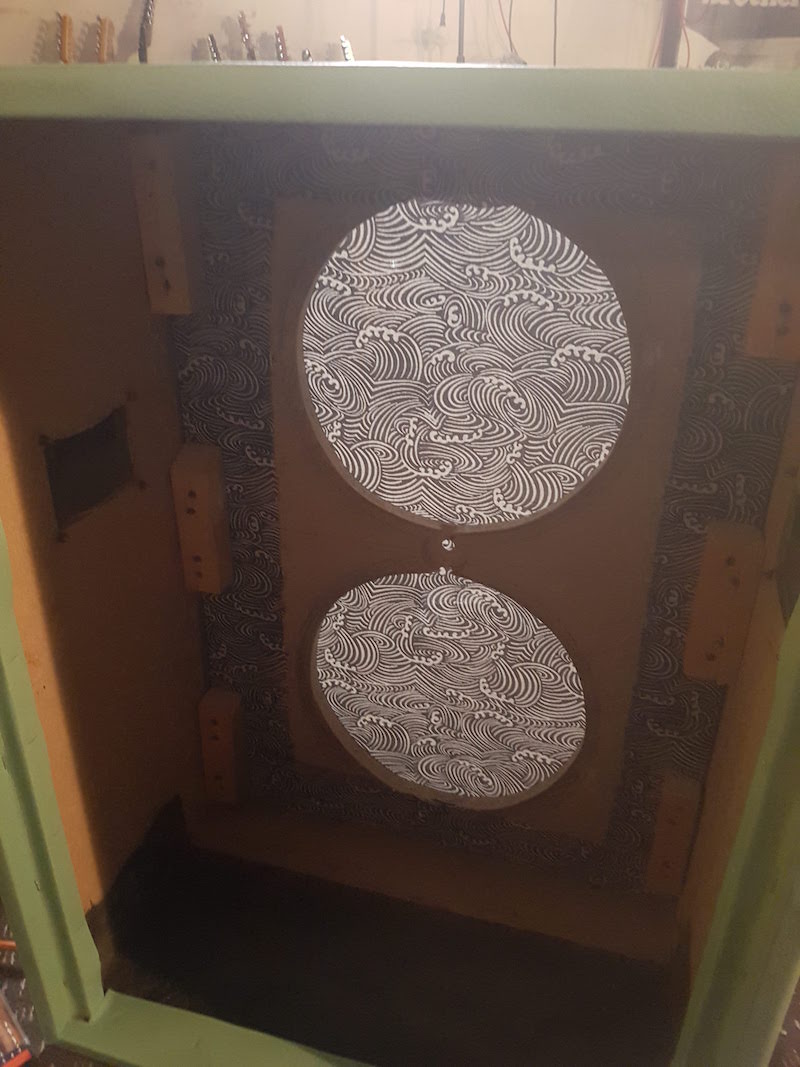 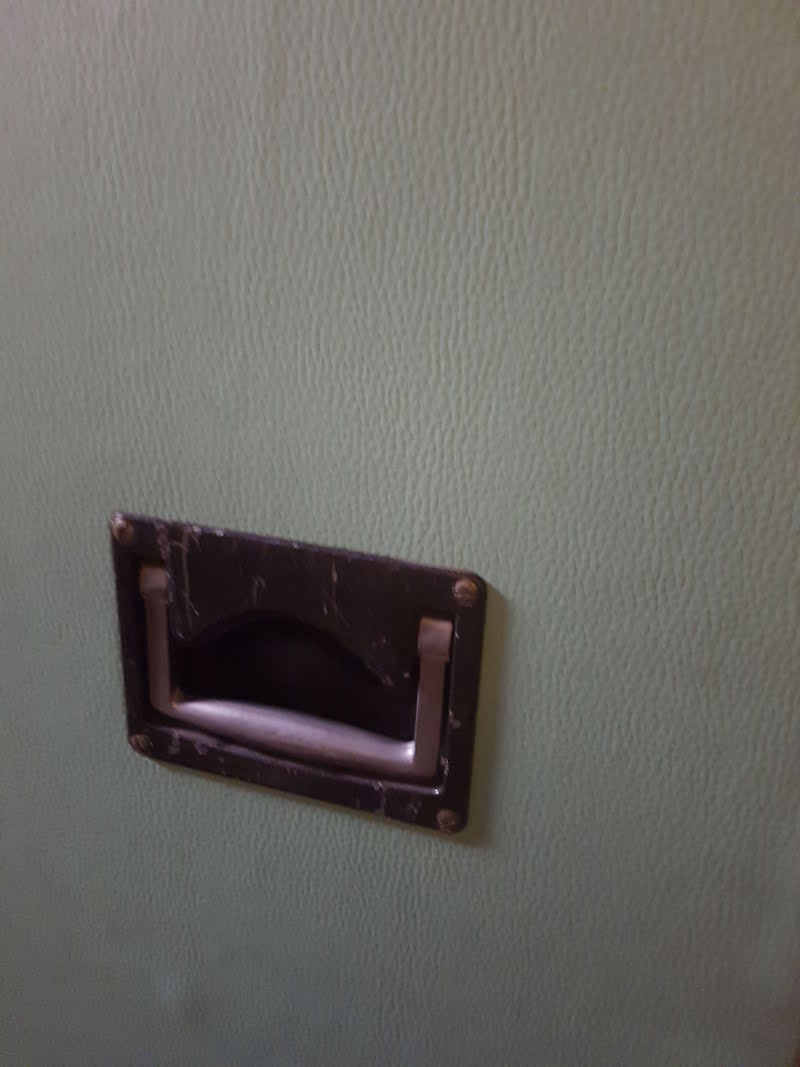 And here's the end result for the day: 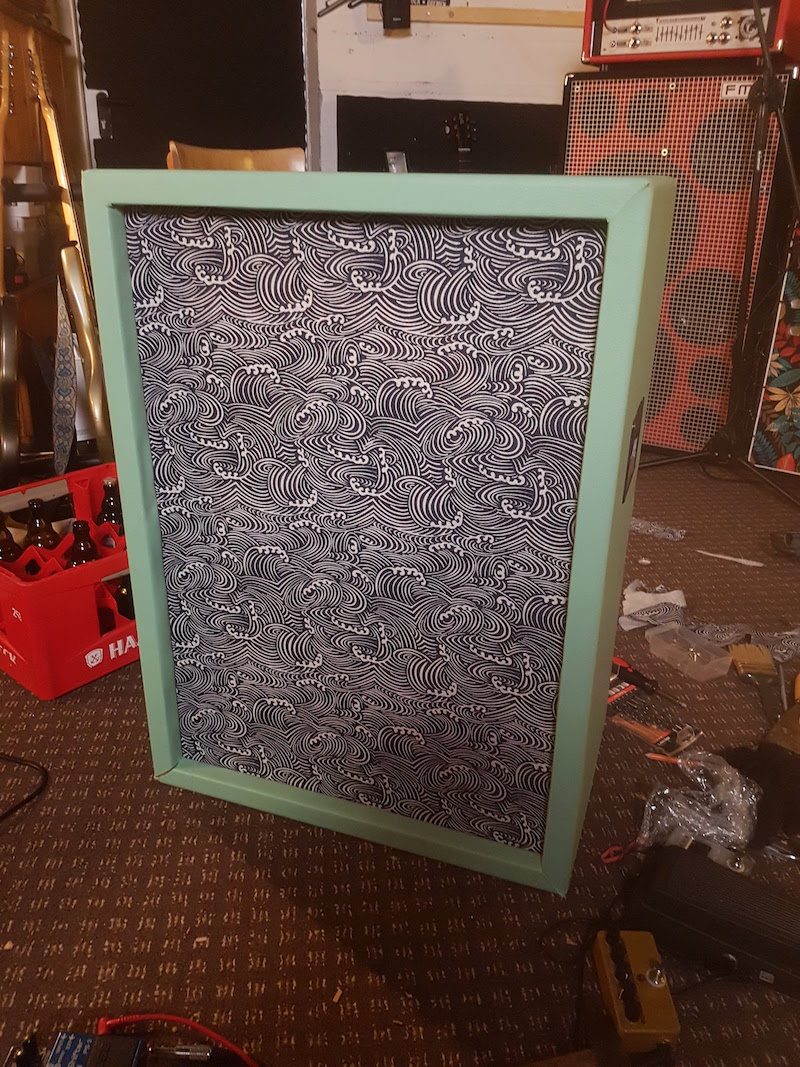 So, yeah, I'm actually quite happy with the cab. Next week is a trip to the hardware store to get some last bits and pieces. Then I'm going to make the back pieces, install the speakers, metal corners and feet and then I'll find out how the thing sounds.

by fever606
I’ve recovered a couple of cabs and I don’t think any of them came out looking better than this. While I’m not the biggest fan of SFG, that looks really good... I really like the pattern of the grillecloth!

by Zork
Hey, thank you @fever606. I like that grillecloth a lot, too. Initially I wanted to cover the cab in a dark teal or maybe purple. But when I found the fabric in a shop, I thought that would make a great grillecloth and it would go really well with a mint green. There are many cool options out there if you step away from traditional materials. There's a cab builder in Halle, Germany, Jacob Hirschfelder, who builds incredible nice (and very massive) cabs, all very colorful with very nice fabrics as frontclothes. I think he comes from a stoner rock background. You should check out his website or facebook.

by Veitchy
Man, I love that grille cloth. Come to think of it, I don't know why more manufacturers don't go for something funky like that.

Thank you, man. Canvas is indeed a fine material for a grille cloth. It's easy to work with, doesn't stretch and is sturdy enough to protect your speakers in most cases. Still, it's just cotton and not nearly as sturdy as the common polypropylene weaves and I'd believe that there would be people complaining about quality if a manufacturer would offer it commercially. Also, canvas is less sound-transparent and it cuts off a bit of the high frequencies.

But it's easy to just do it yourself. I just recently put a new cloth on my other cab and it came out just fine: by Zork
I'm done. It's finished and sounds amazing. I'll tell you later, let's start with the pics.

When I installed the speaker, I also redid the bracing of the front baffle. It's now much cleaner and stable: 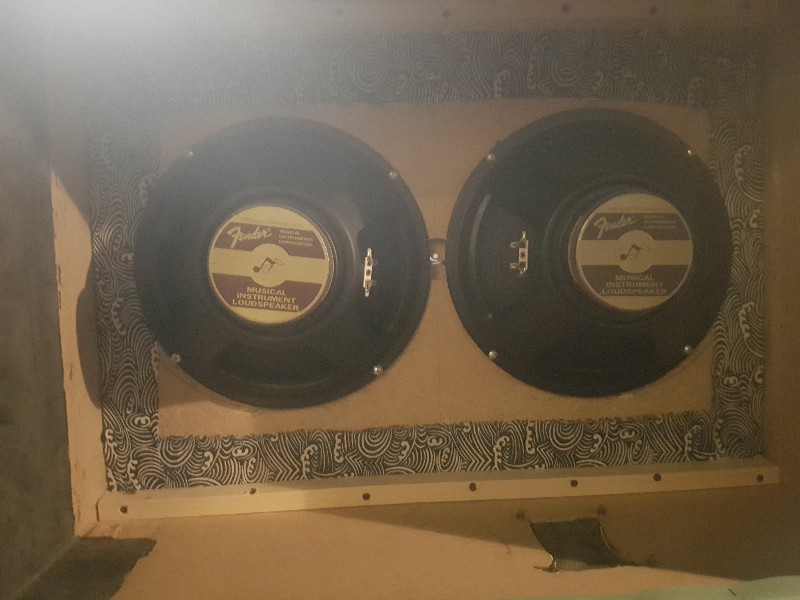 Speakers all wired up: 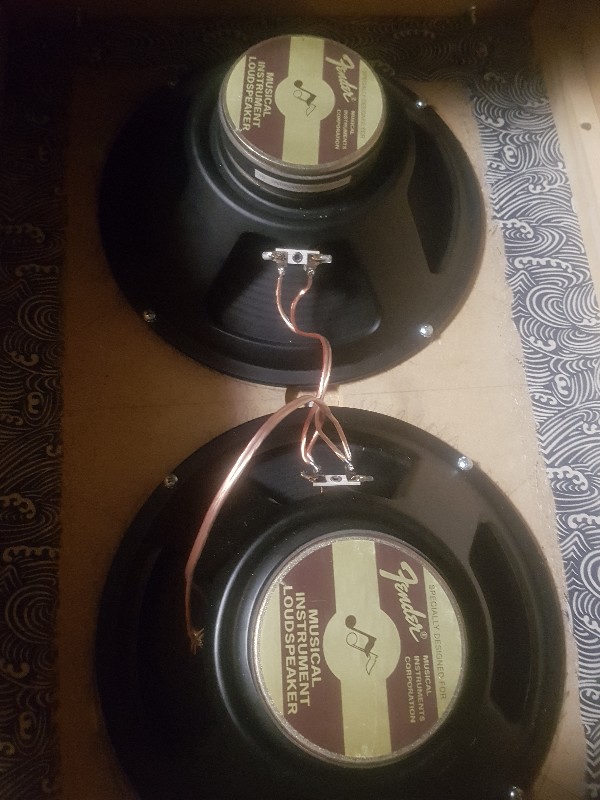 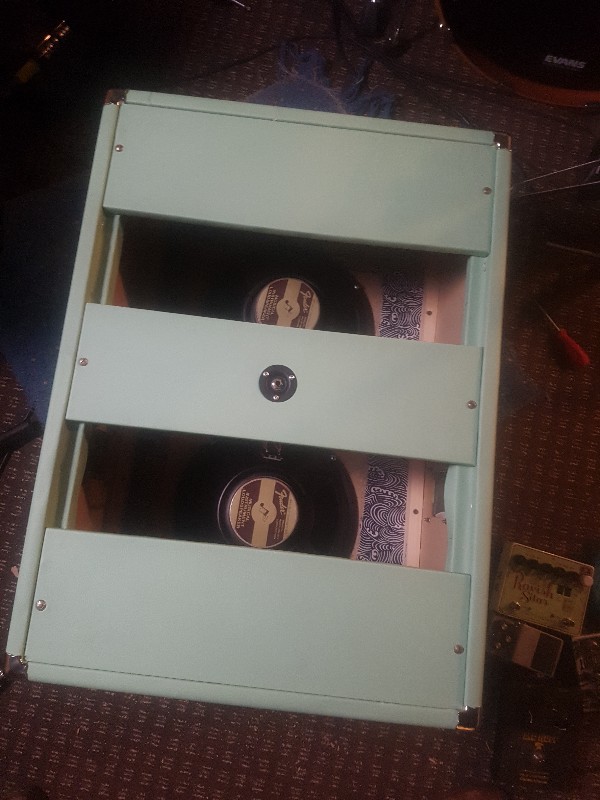 Then I wanted to build a patchbox to put the 2 cabs in series for a total load of 8 ohms. Turned out I didn't have the parts I needed, so I hooked them up to my Peavey Mark VI which is designed to take two 4 ohm cabs in parallel.
I cranked the input gain, rolled off the bass a bit and there it was: the perfect sound for a Bass VI: a roaring and bold tone, right in between guitar and bass. I just love it and I'm super happy with both the look and the sound of that rig. 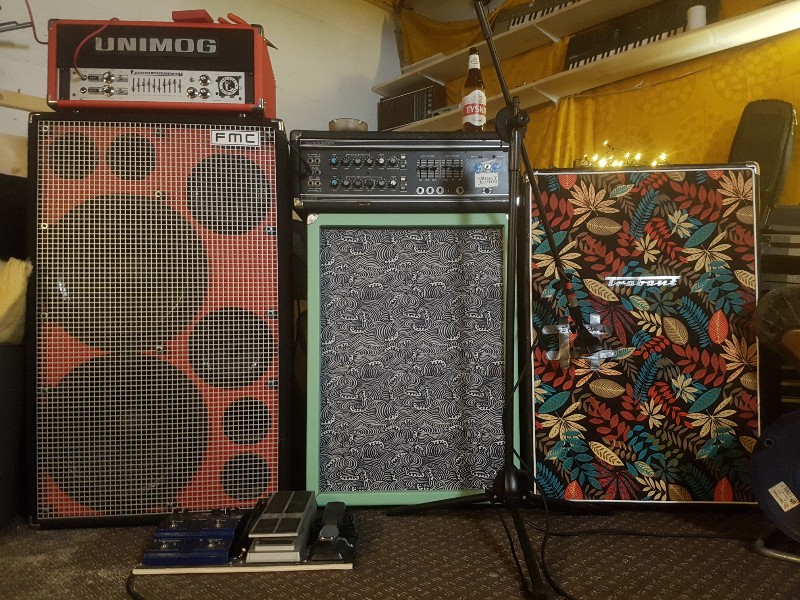 (The "Unimog" is used for synths and vocals at the moment. It's a fantastic bass rig, too, but way to clean and hifi-sounding for my current band.)

by 46346
bravo! and like Andy said, way more interesting. if i saw you playing that rig live, i would come up afterwards and ask you about it. good job nailing the sound you were after.

by MayTheFuzzBeWithYou
Wow! Very nice indeed! Great choice of the grille-cloth and also the Surf Green looks excellent! Reminds me that I wanted to do a matching 1x15 cab for my Surf Green Fender Vaporizer! ;-)

by mortron
This is a rad cab project. Great results. The Seafoam Green tolex has always appealed to me, and this just makes me realize how nice it can look when done well. Congrats. Bet it sounds great as it looks.

by fortytwo
I'm going to jump on the bandwagon, that grill cloth looks great, where did you get it?

by Zork
Thank you guys. I just looked for canvas on ebay and found the blue one. The other one is from etsy iirc.
All times are UTC-08:00
Page 1 of 1
Powered by phpBB® Forum Software © phpBB Limited
https://www.phpbb.com/