School me on Tweeds

School me on Tweeds

I’ve never played a tweed amp. I understand they do the gritty Neil young thing, but what about other applications?

Mainly wondering if they can perform well for ambient/gazey/post-rock music or are they relegated to thick blues tones all the time?

Not looking for pristine blackface cleans. I’m actually more of a fan of vox cleans.

I’d also be particularly interested in knowing different tweed style amps to look at. Both Fender and non/fender. What is the best value tweed to look for?

And...are there any examples that are online of people/artists using tweeds for ambient music? I couldn’t really find much.
Last edited by Unicorn Warrior on Sun Jan 10, 2021 3:00 pm, edited 1 time in total.
Top

I like them as a sort of counterpart to the Vox sound -- while the Vox is chimey trebles and upper mids that goes into this snarly, bright, harmonics-first overdrive, tweeds are more bass and low mids (without losing clarity) that go into this grunty, chunky fundamental-first overdrive. Both can get clean, but they really shine (especially when you're running both at once) at sort of edge-of-breakup, slightly gritty cleans.

The best value IMO is just picking up a modern Junior or HRD and modding it up, which also gets you a lot more flexibility as far as changing the EQ points and the amount of gain in the circuit. If you want proper vintage-accurate, I'd say probably an old tweed Junior, because the damn things are already real loud and a tweed without a bit of breakup is kinda lame IMO. Honorable mentions to the brownface Fenders, which are slightly more refined and controlled but to my ears have a similar voicing to the tweeds, and to the Fender Supersonic line, which gives me transatlantic tweed/brownface kinda tones but with both much more gain (and more flexible and usable gain) than either one, and also an unexpectedly good clean channel.
Top

I would personally be reluctant to lump all tweed amps together. Other than the covering and speaker selection, there's quite a good bit of difference from model to model. For example, there's a lot different in construction and sound between a 5F4 Super and a 5F6A Bassman. Even more so when you get into the smaller amps like Deluxes, Harvards, etc. In a general sense I agree with the previous post that they arent really known for being bright and chimey, but amp to amp ones mileage may vary.
Website: http://ballseffects.com/
Instagram: https://www.instagram.com/thetonyballs/
Top

Everyone loves to talk about the tweed overdrive sound, but I sincerely believe that the tweed era circuits have the richest and best clean tone Fender ever had.

Listen to what Steve Cropper does with a Harvard all over the classic Booker T and Otis Redding tracks.

i have a couple tweedy numbers, but i rarely employ them in a shoegazey direction. but if you can do your gazing at a relatively low (non-MBV) volume, or mainly for recording, there are a couple of pretty neat options. my first success was with a 90's reissue 4x10 Bassman, which i do not own but had on loan in it's day. a really great amp for $400 used! more recently i've employed a Double Deluxe from Victoria. as the name implies, it's a tweed deluxe times two. the cabinet design on both of these gives a nicely blooming bass that not all tweed-era cab designs give you. i paid $1300 for a used Vic DD, maybe seven years back, being hand wired and with nice Jensen 2x12's and all.

that said, my more common shoegazey option for live gigs or jams involves two amps: something deep, like my '61 Bassman or '68 Super Reverb, along with a Vox AC15 (handwired 50th anniversary version, in my case). also in the grindy camp, and early Ampeg Reverberocket. you know, deep AND chimey/grindy, and you can balance both elements to taste, if you have the set-up time.

I have two: a 59 Bassman LTD reissue and a 5E3 deluxe clone. And honorable mention to the Ampeg J-20 (almost a brownface 6G3 clone). With these circuits you are looking at a fuller tone than AC’s. More low end, more low mids, a fuller sort of sound. I had an AC15 for a bit beside the 5E3 and I have stereo’ed the 5F6A with my bandmate’s hardwired AC30 half stack. I find the tweed circuits overpower the Voxes. I love the vox blizzard of nails thing when I hear other people do it but not so much for me. I like low end and I think I would certainly want more of it playing in a more ambient style by myself. No problem there with the true tweeds as they are darker amps (especially the 5E3...though speaker choice goes a long way to tweak the frequency response). The J-20 may be a good hybrid though as it is a very bright amp and can be tuned to respond like a burlier AC (especially with a Gold or Creamback) but rolling off the treble can pull it back into the lower mid tweed thing with a slightly tighter low end. My band isn’t shoegaze or dreampop but we often get lumped in with those sorts of artists (we do have some slowdive, ride, and swervedriver in our dna) and I’ve never felt that the tweeds were the wrong amps for that application. But I’m the dirty rhythm sound in our bands equation; my partner is the more affected delay/reverb side of things and he is very much a blackface Deluxe/Twin guy.
Top

I tend to favor Vox type tones. My main amps (Vox AC30 TBX, Morgan AC20 Deluxe, Mesa Blue Angel, Marshall 2061X - yes this amp can get some nice AC30 type tones) for years have centered around that type of sound. I recently bought a Fender Edge Deluxe as a lightweight easy to haul gigging amp. It has been stellar. It doesn't sound like an AC30, but it does sound great. 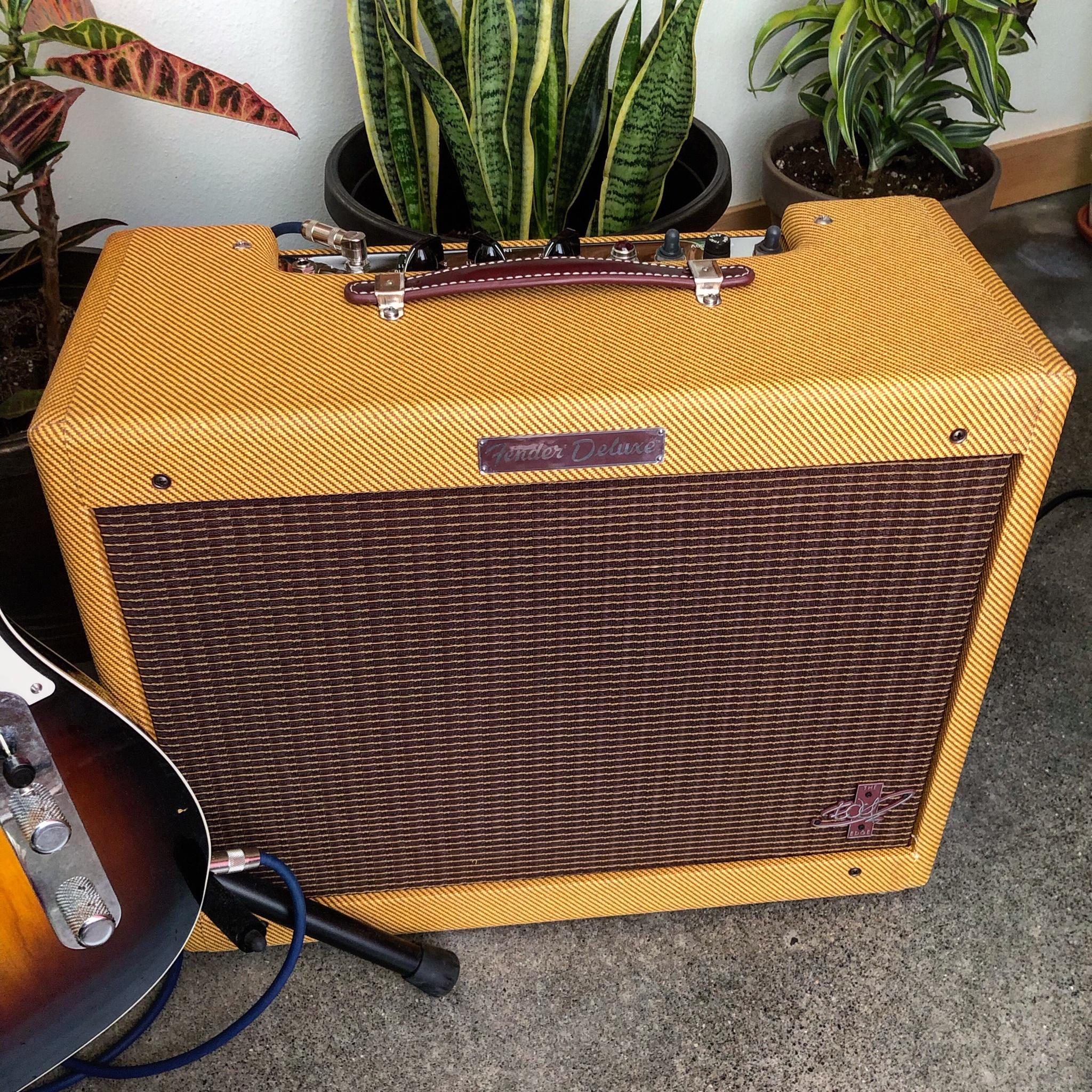 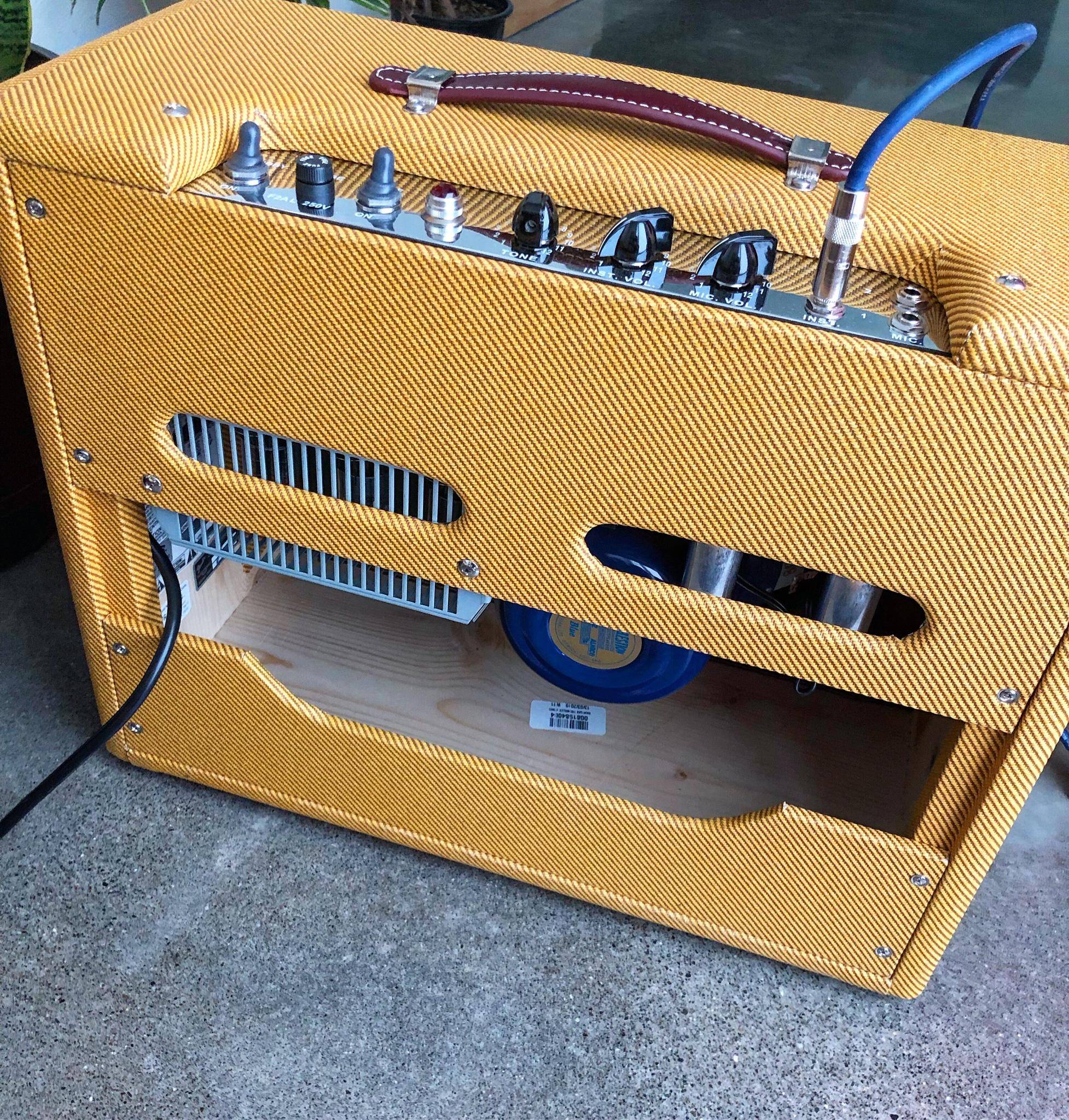 peterherman wrote: ↑
Thu Jan 07, 2021 7:04 am
Everyone loves to talk about the tweed overdrive sound, but I sincerely believe that the tweed era circuits have the richest and best clean tone Fender ever had.

Listen to what Steve Cropper does with a Harvard all over the classic Booker T and Otis Redding tracks.

So true. It's a strange combination, but Cropper and The Edge are who led me to buying a tweed amp.
Top

I have a 5e9 Tremolux. It is closest to the 5e3 Deluxe that RedChapterJubilee mentioned above, only with tremolo. It does the awesome thick Neil Young thing really well with humbuckers or P90s but with JM, Tele, or the weirdo mini-hums in my Yamaha SA30, can be very defined and articulate with the right volume/EQ settings. It is LOUD for a 12 watt amp with a vintage voiced speaker, but really rewards using the volume and tone controls on both the guitar and amp to get the sounds you want. These smaller tweeds are NOT one trick ponies. You just need to approach them differently than you would a SF Fender. I’m always finding out new things about it. The other day, for example, I dialed in a pretty darn convincing surf tone (minus the reverb) with a tight, well-defined low end and clear, clean treble.
If you want to get louder, the Bassman is where it’s at and reissues of those can be had for cheap. They really do sound nice, if different from a Deluxe or a Champ.
Top

Meriphew wrote: ↑
Sun Jan 10, 2021 8:35 am
I tend to favor Vox type tones. My main amps (Vox AC30 TBX, Morgan AC20 Deluxe, Mesa Blue Angel, Marshall 2061X - yes this amp can get some nice AC30 type tones) for years have centered around that type of sound. I recently bought a Fender Edge Deluxe as a lightweight easy to haul gigging amp. It has been stellar. It doesn't sound like an AC30, but it does sound great.

I’ve been a vox guy for a while and am looking for something quality but smaller. The one thing about vox that I don’t like is the treble can be over the top.

I didn’t really realize these edge amps existed. If the edge plays with these, then it will definitely fit the bill. I actually listened to some demos and they sound fantastic.

I’m afraid 2k is a bit steep, even when the time comes. Wondering if there are cheaper/quality options? The alnico blue seems to be a big part of the recipe
Top

What is your price range? How much does it matter that it says “Fender” on the front? I’m sure you could get a 5e3 clone built or modded to Edge specs for way less than 2K
Top

No price range at the moment, I’m currently building a guitar but am already planning my next venture being a quality amp purchase. So for now I’m in the early tire kicking phase. I really just want the most quality, versatile tube amp in a smallish package. I like the quality and price points of fenders blackface reissues, but I don’t want the blackface sound. I do cringe at spending more than $1500 on an amp. It just depends, ya know.
Top

I have a 5e3 clone that I got used for under $1,000.
Some people can't get with tweeds but with a little
time you can find some fantastic tones, especially
with single coils.
It's really responsive to string dynamics, I use mine
with pedals though some people like the natural breakup only.
The speaker choice will somewhat dictate available headroom,
I have a Weber in mine that does it for me.
Everyone should try one , if possible
Top

One thing to watch for when buying 5E3 clones is to make sure it was built well. It's probably the first amp most kit builders assemble and sometimes they get dumped because they weren't put together right in the first place. But if you have a good tech around then fixing someone's errors is relatively inexpensive. I got a great deal on a well-built Carl's Custom 5E3 because it was put into an ugly Mojotone cab (black tolex with oxblood grill...not terrible but also not, you know, tweed).

I would be worried about trying to play a 5E3 in a band context but my bands tend to be on the loud side. I absolutely adore my 5E3 but it's not loud enough. I have a 59 LTD for that if I want giggable tweed. Speaker choice can help with volume (my LTD is in a headshell so I can use it with different cabs). It is the most affordable tweed circuit out there since Fenders had them on the market since 1990. They are heavy, speaker rolling can be expensive, and without a master volume you will have a certain volume threshold to meet for certain tones. That would be true with all tweeds though.
Top
Post Reply
24 posts