by Danley
Just grabbed the Torn’s Peaker, but only had enough time for a quick blat on it this morning so don’t have a full range of things to say about it yet. Always wanted one based on the ProGuitars demo of it and the Shoegazer.

Only really want to grab a Hyperion now 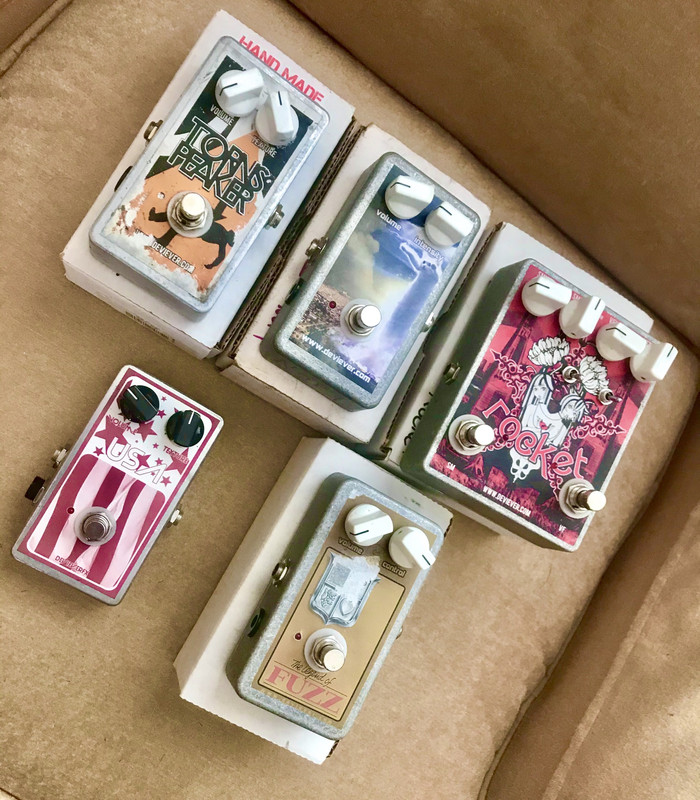 by Danley
So it's been a while since I leaned into any of these pedals; might as well post a few thoughts on the rest, on top of the Peaker:

-Torn's Peaker: I initially wanted this pedal because of how it 'cleaned up' in the ProGuitars whatever Shoegazer demo. So does it do that? Well, mostly yes. If you roll back the volume, especially on a neck single coil pickup, it gets pretty damn clean; then when you turn the guitar volume up, it goes absolutely fucking insane. So the range is pretty much a thumbs-up - but the clean trick isn't quite as good with a humbucker, and bridge pickups seem to be pretty honky. Overall the pedal is a LOT like the Vintage Fuzz Master (squeaking, bright octave-up) except it's more glitchy and has more bass vs. my expectations; it turns single coil hum into background glitch. Turning the texture knob clockwise mitigates this, but removes a lot of bass and makes the thing even squeakier (though as typical for a lot of the above pedals, the texture knob is actually pretty subtle.) The thing doesn't erase your bass like the VFM either; instead it replaces it with a deep, deep square wave sound that glitches out on decay. The funny thing is, it's almost 'normal' if you keep the volume back on your guitar, which seems to be its primary mode

-Bit LOF: This is probably the *best* Devi Ever pedal I own. It does the square-wave synth role, but at the same time it's actually somewhat... Clean as in not glitchy or warbly even considering it's gated as hell, so you can use it with power chords or for more 'normal' passages and mostly forget it's actually a pretty insane pedal

-USA: A lot like the LOF, but with a 'zipper' character, and a reduced, more warbled/scrambled bass. The texture knob does almost nothing; maybe lengthens the gate somewhat, and makes things brighter? But that's it. Pretty good but it's interchangeable with the LOF in ways, and slightly worse

-ZG Nofi (longcat) : This pedal is a joke. Not unconvinced it isn't broken; but the board is taped up and I don't want to undo it. The gate is so severe it almost won't work with low-output single coils (as in, it won't make sound at all unless your pickup output is high enough.) It takes a razor blade to your bass; it is a bass remover. And it is LOUD. This is true of all the Devi Ever pedals (leads me to think she really wanted them to be played through a distorted amp, and shoved in a lot of gain to *make* your amp distorted.) This will easily wake up your neighbors a block away if you use it on the clean channel, even compared to the others. Maybe you're supposed to stack it, I have no clue. Anyone else have one/can comment?

-Rocket: This is supposed to be the Siamese Dream pedal; I guess it's a decent caricature of that sound, with regard to either the Soda Meiser or the VFM, for leads in particular. The bass is sort of too scrambly to really do it 100% though. In ways the Soda Meiser is a more useable Big Muff; cuts better, more volume etc. but it replaces the thuddy Big Muff bass with something warbled and thinner, for chords in particular. The VFM is basically a gated octave-up fuzz, and I've got to say it's probably the least useful of any of the pedals with the exception of the ZG. The switches are a novelty. Mostly keeping it for the art

by erikb02809
It might just be down to quality variances in assembly, but I had like, the reverse opinion of the two parts of the Rocket. I thought the SM was a crappy Muff substitute. Wayyyyy too wooly and I lost all my high end with it. Meanwhile, I fell in love with the VFM. On its own, i can get the 60s Davie Allan and the Arrows biker flick fuzz tone, and going into a Muff, it sounds incredible, especially above the 12th fret (as one might expect).

I've got limited space on my pedalboard so i can't justify keeping them both on it at the same time, but it fights with my Green Ringer clone for that first spot in my signal chain. Currently, the Green Ringer is on there, but after writing this post, I think I want to swap it out for the VFM. I've owned the Hyperion, Godzilla (which also features the VFM), Rocket, and the VFM. The VFM is hands down my favorite Devi Ever circuit.

That said, the Hyperion is probably the most versatile of the ones I've tried. That PGS demo from like 12 years ago really does a good job demonstrating the range of sounds you can get out of it. On its own, it was neck and neck w/my favorite Muff pedal I owned. However, it was a little bit finicky about what came before it compared to a Muff (it got kinda crispy sounding if you had a buffered signal going into it - not a huge difference like w/some fuzzes, but the difference was there), so I ended up going back to a Muff for my main fuzz once the green Russian reissue came out.

by tune_link
I haven't been on the boards in a bit so surprised and excited to come back and find this thread. I only own the Rocket at the moment. I fucking LOVE it. I bought it back in 2016 and it has not left my board since. I've tried several times to replace it with other fuzzes to no avail. I tried using the Earthquaker Terminal (which I really like but mostly in addition to the Rocket and not replacing it, it tends to have a more distinct punch for leads especially when used in tandem with either side of the Rocket). I tried using the DBA Apocalypse but it didn't get along with my previous amp and despite all I read to the contrary it maxed out at unity volume and I would get lost in the band mix. Very recently I tried replacing it with the 76 Fuzz Plus from SolidGoldFx but that thing ended up sounding really thin with harsh treble in a way that even I as a professed noise obsessive couldn't really use.

So you're probably wondering what it is about the Rocket that makes me want to switch it for something else. HAHA well it's the switches. They're placed in just about the very worst place imaginable and I constantly find myself accidentally kicking on that trem function or the chaos switch (which I do use occasionally) at times where it just destroys my signal (the trem in particular is really bassy and just destroys all note clarity).

Anyway, I run the Rocket into an EQD Hoof and basically cascade them to switch fuzz tones for effect. My dream guitar tone is some variation of Siamese Dream, Loveless, and any of the super crunchy Dinosaur Jr stuff. I actually don't like how the Soda Meiser side sounds on its own but layered with another fuzz it's heavenly. Using it for leads is also really great. I love how the VFM side descends into ugly noise if you step outside of a certain note range or bend a note a little too far - one of the things about Siamese Dream that no one seems to desire hearing but me from any videos of people chasing that tone (there are so many and so many really fucking bad ones that get the tone way wrong/off thinking you just cram any old big muff in there and start playing Cherub Rock and you'll be fine....smdh).

Tell me more about the Hyperion and the Torn's Peaker though. I've been looking at both of those for years and haven't pulled the trigger. Does the TP really do that busted speaker sounding overdrive that I imagine and desire it to do?????
All times are UTC-08:00
Page 1 of 1
Powered by phpBB® Forum Software © phpBB Limited
https://www.phpbb.com/