A couple of weeks ago, I discovered this pedal through a french reviewer's channel.

It is an hybrid silicon.germanium fuzz based on the triangle muff, made by a very small company based in Moscow (one year or so after the review, my pedal is #152).

What I liked in the video was the overall tone, and the fact that the pedal seemed to be able to clean up like most muff's aren't, and I was not disapointed. While the core sound is undoubtfully in the muff territory, this one has a clarity I've never encountered in the other variants I tried, and a lot of cool bluesy tones when I roll back the guitar controls.
The overall impression is that is goes further than other muff's, in both directions. With gain maxed, it goes crazy, but still retains an excellent clarity, and with gain backed (or guitar controls), it can go almost clean. Works well after a buffer, so it's now on my ES-345 dedicated board, which needs a stereo to mono buffer in front of the chain.

The name and (handpainted) design are inspired by Jarmusch's movie, their taste could be worst. Now I've found the perfect fuzz to play with the Catalinbread Adineko.

Worth noting also that for the first time in 15 years I haven't had to pay import taxes on an item I bought outside EU. Not sure if this is a result of how they completed the forms, or a side effect of the current crisis, but it was a nice surprise. I was lucky also because, while I ordered it before the crisis, it was completed and shipped two days before Russia issued a ban on mails to and from EU. 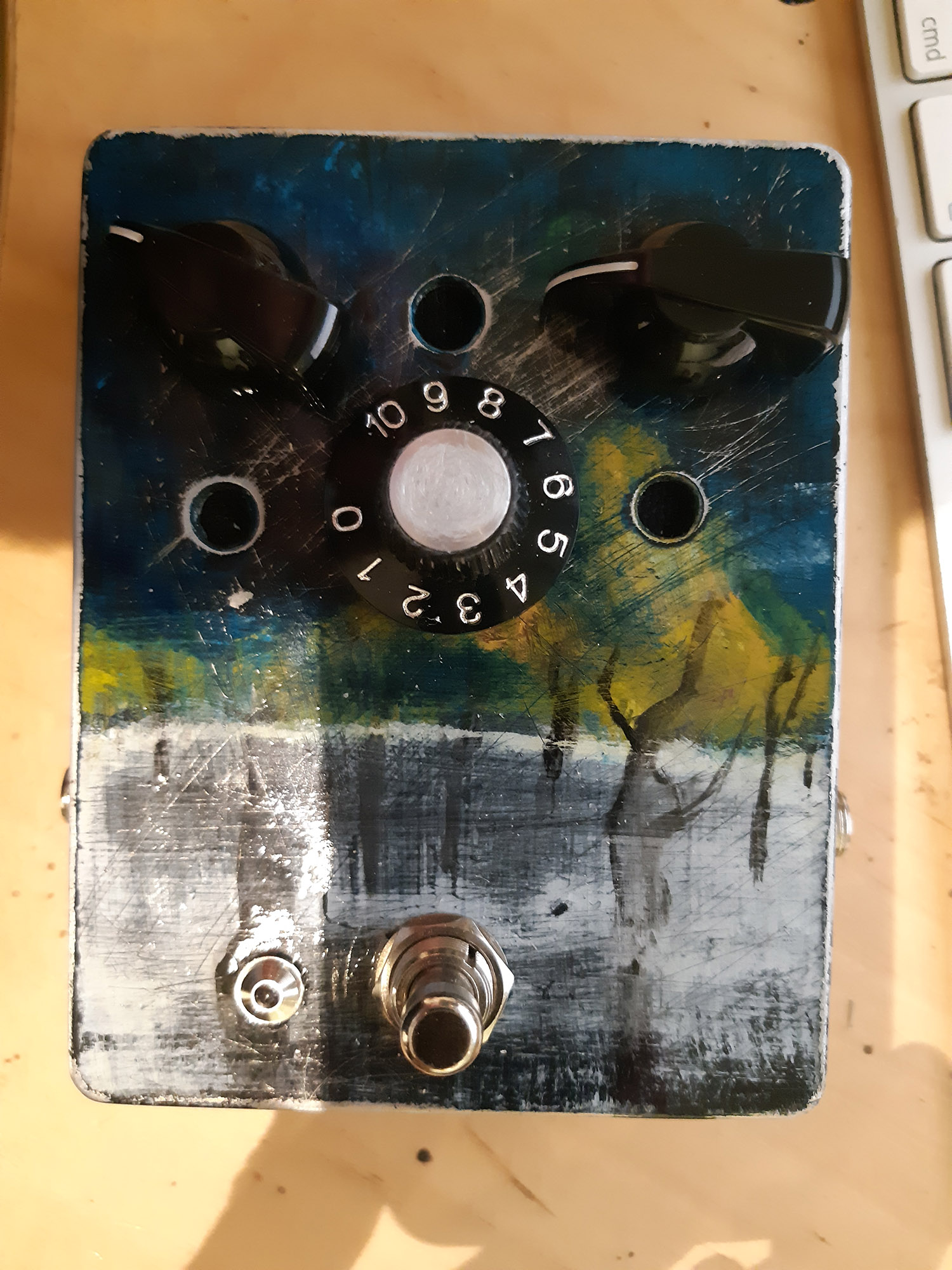 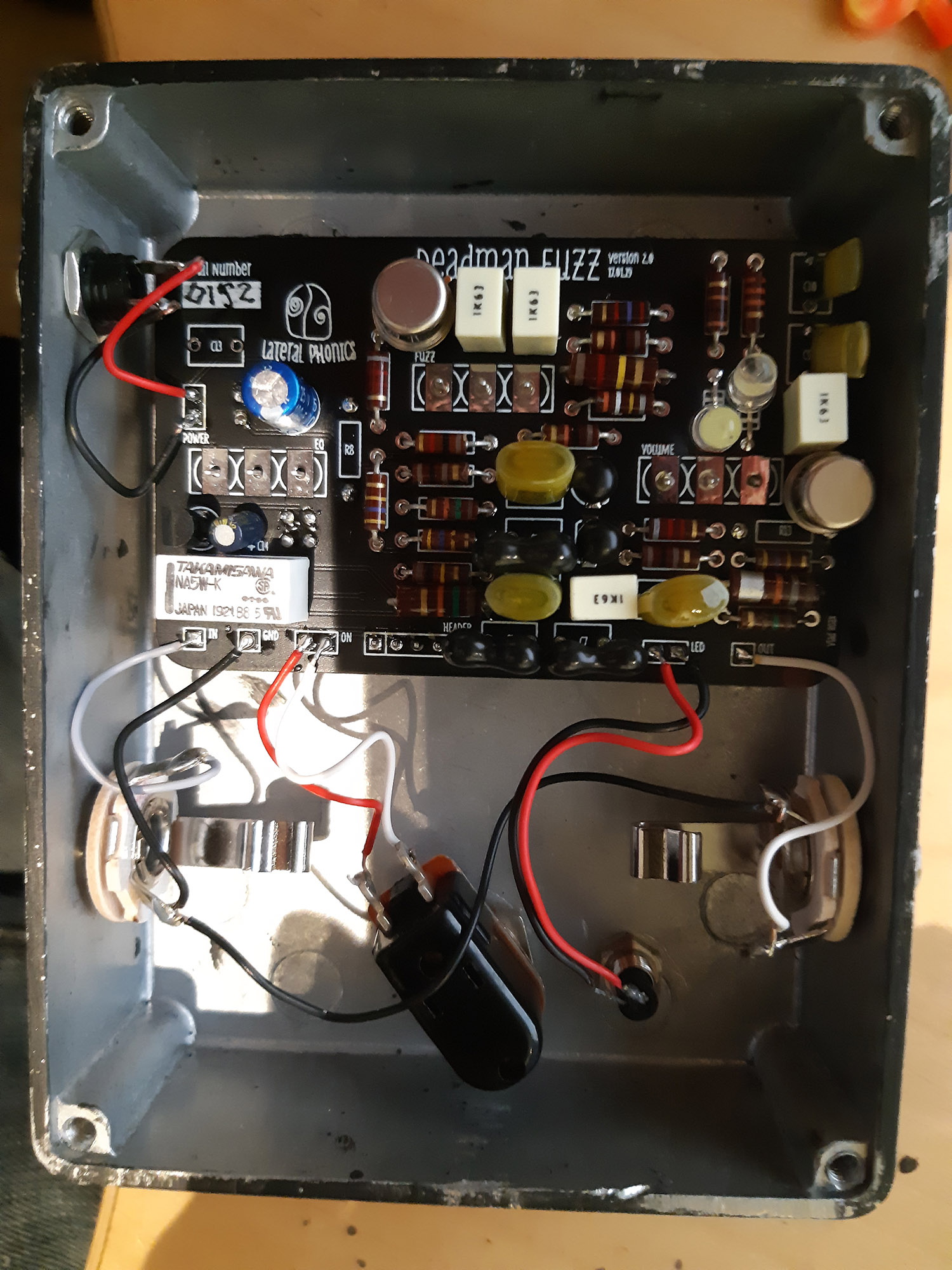 That's awesome! Do you have the link that originally inspired you, or a recording of yours? I'd love to hear it!
Pickup Switching Mad Scientist
http://www.offsetguitars.com/forums/viewtopic.php?f=8&t=104282&p=1438384#p1438384
Top

A Big Muff that cleans up is a bit of a holy grail! Interesting that they mix germanium and silicon.

I was going to suggest that a Colorsound Jumbo/Supa Tonebender comes close to achieving that, and it’s loosely based off the Big Muff circuit.

This circuit actually looks like a Jumbo Tonebender to me.

1- You can build one on a Big Muff circuit board.
2- The NYC Muff can be easily modded to be a Jumbo.
3- I actually only see a single silicon transistor, along with the 2 Germanium. It looks like Q4 is missing or has been clipped, or is it on the other side of the board? But why do that? * edit- I found a clearer picture of the circuit with the AC-germanium transistors that showed the silicon pair more clearly and had different LEDs.
4- I only see one set of Diodes - and they’re LEDs - that also sounds like a Tonebender mod, one set and the LEDs have different clipping characteristics.
5- The Germaniums would/could lower the gain somewhat and be less compressed and have a better ability to clean up. The Jumbo is slightly lower gain than a Big Muff and has better clean up, not Fuzz Face clean, but much more than a traditional Muff.

It definitely sounds (and looks) like an awesome pedal, whatever it is. I want to source one myself now. I have a fuzz with Russian germaniums in it that sounds amazing too.
Top

That looks really cool, I like the paint job. I’m glad you ordered & got it in under the wire. New things are great in situations like now, and you get to spend extra time with it.

I bet those do sound good together, Catalinbread makes some nice delay & other pedals. I love the Belle Epoch Deluxe, and would like to try the Echorec and Adineko one day.

There doesn’t appear to be a switch, are both of those transistors always on? That would seem a little weird , but whatever works.
-David

There is a switch, though it's not the traditional 3PDT. It's the black plastic piece with a red and a white wire. Not sure how it's wired inside, but it allows for silent switching.


I actually only see a single silicon transistor, along with the 2 Germanium. It looks like Q4 is missing or has been clipped, or is it on the other side of the board? But why do that? * edit- I found a clearer picture of the circuit with the AC-germanium transistors that showed the silicon pair more clearly and had different LEDs.

They are beside the volume pot. They are the T0-106 casing type that is usual for 2n3565, but as they are black, and the picture is dark, they are not easy to spot

Led's have more headroom than other diodes, might be a part of why the pedal sounds so clear.

I'm not familiar with the jumbo Tonebender, but that sounds like an interesting pedal, i'll do some research.


That's awesome! Do you have the link that originally inspired you, or a recording of yours? I'd love to hear it!

Sure! Here's the link to the review, as well as a video from Lateral Phonics themselves. I'll try to record some sample as well when I get the time.

That's also what I think

The strat sounds also amazing, and I like the slide part on the Sheraton too.
Top

The strat sounds also amazing, and I like the slide part on the Sheraton too.

I'm kind of picky about my Strat tones and that one didn't do much for me. The Sheraton sounded amazing, and his slide playing was so good.
Pickup Switching Mad Scientist
http://www.offsetguitars.com/forums/viewtopic.php?f=8&t=104282&p=1438384#p1438384
Top

There doesn’t appear to be a switch, are both of those transistors always on? That would seem a little weird , but whatever works.

Switching is done via a relay and a transistor (JFet I think, thought I can't see the marking due to its position). I'm not familiar with the system, but I've seen it elsewhere.


It definitely sounds (and looks) like an awesome pedal, whatever it is.

I traced the circuit. It's sort of a mix between a muff and a jumbo TB. It has four stages, like a muff. But only the third stage has the clipping diodes. The second stage is similar to a jumbo's. Also, unlike most of the hybrid SI/Ge BM I've seen, the two first stages are silicon and the two last ones are Germanium. Usually, Ge is used in stages 2 and 3 (clipping stages).
It also has a bypass cap in parallel with the resistor to ground at the high-pass filter of the tone stack, not sure why.
Top

Very interesting. I haven’t seen many Ge/Si Big Muff circuits but it certainly looked like it had some Tonebender hybrid to it.

Incidentally the Supa Tonebender, which preceded the Jumbo, is also a Big Muff based Tonebender circuit, and while the Jumbo drops a gain and clipping stage, The Supa only removes the clipping diodes from the circuit. It’s four stages like the Muff.

The other thing that’s often commented on about that circuit is that it’s a great fuzz for Bass Guitar because the bottom holds together, almost like some of the bass frequencies are sent through clean and mixed with the fuzz signal.

I wonder if the high bypass filter section that you described would allow for that? If that’s the reason it’s there, to let clean bass frequencies through for a deeper fuzz sound? Other than that the tone stack is supposed to be similar/same.
Top

I just made one on my breadboard because I thought it would be fun to experiment a bit with the circuit. When I traced the circuit, I couldn't be certain of the white caps values. They are marked 1k63. I can't measure them without disasembling the pedal, so I decided to stick to common BM values for them.

I don't have neither of the transistor types, so I used TI 2N3053 for Si and RCA 2N388 for Ge. Sounds good, maybe tad less gain than the original.

I haven't experimented much with the bypass cap yet, but it seems to add a bit of bass/low mids.

The white 5mm LED's seem to play an important role in the pedal's behavior. I tried with other diodes, including 3mm yellow and blue LED. The large white ones sound much clearer and stay tighter, really a important part of the pedal's sonic signature, I think.
Top

I was misleaded when I traced the circuit because I expected a BM tone circuit. It appears it's something different. Does this schematic make sense? And if so, what does it actually do? 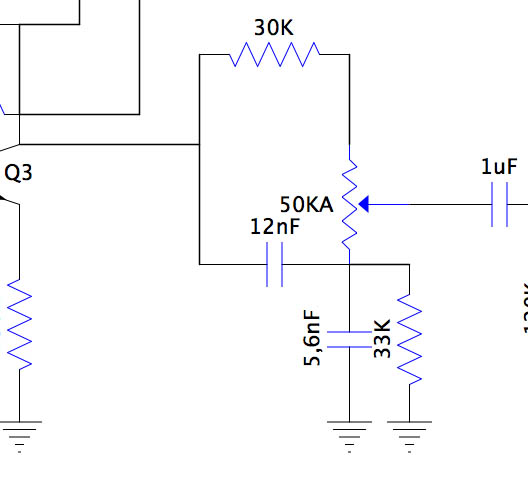 HH1978 wrote: ↑
Sun Apr 26, 2020 3:58 am
I was misleaded when I traced the circuit because I expected a BM tone circuit. It appears it's something different. Does this schematic make sense? And if so, what does it actually do?

The layout looks like the Timbre section of a Burns Buzzaround, not the same component values, but the layout would point to a similar functionality. The Buzzaround is similar to a M-III Tonebender, not the same circuit, but they function and sound alike. The MK-III has a less primitive tone control, but it’s not a Big Muff tone stack either, but closer to that than what you have here.
Top

Thanks! I will investigate on that side

I also noticed the voltages are quite different than what would be expected on a classic muff.

On my first breadboard attempt, I had the collector of Q3 at around 4v. I didn't find a 18k resistor as in original, so I put on a 15k. It changes the sound quite a bit : fuller, but also much less distinctive than the original.

I replaced the collector resistor on Q3 with a 33k, which brought back the voltage to 1,79v. They sound almost the same now, so I think the schematic I traced must be right. A nice sounding circuit! I'll have some fun experimenting with diodes and tone stack.
Top
Post Reply
21 posts