Fuzzy drive pedals that are not fuzz pedals

tune_link wrote: ↑
Fri Dec 04, 2020 10:43 am
I think these qualify but more importantly this is a question for the board regarding the SSBS Mini and Fuck drives. Are these the same pedal? I watched a demo of the Fuck where it was demonstrated that it can do a super cool blown speaker/blown tube sound and I know the Mini is sort of a similar/based on the Fuck pedal but in a smaller enclosure. Anyone know if it can also do this same effect or if that's something specific to the Fuck. I know the Mini has a bias knob but I'm tempted to believe that won't do the full on chaos of what the Fuck's one sheet says it will do.

I've had both. Their core tone is really similar—the Fuck is a bit airier and the Mini a little tighter. Both respond well to pick dynamics, etc. The Fuck does the extremely broken thing and can get some really cool breakup textures at less extreme settings. The Mini has much wider eq control, and the bias knob provides its own range of sounds that the Fuck won't replicate. Because of its flexibility the Mini would be on my short list of dirt pedals if I could only have one.

Sounds like I might eventually need both! I pulled the trigger on a Mini about a week ago and from what I can tell it may be lost in the mail (yeeeeesh). Hard to say because I know the USPS is really backed up right now buuuuuuut it's not had a tracking update since the day of shipment when it had "departed post office at point of origin" like a week ago.....
Needless to say I'm very stoked to try it out!
Top

Nick and the Noise wrote: ↑
Fri Dec 18, 2020 7:38 am
JHS Crayon
Simulates a direct line-in setup which used to be a thing in studios. Very unique but can also sound a bit gnarly.

I will preface this with I only tried it in a music store and not in my own setup. But I found that thing to be somehow really thin sounding. Maybe I wasn't using it right, but I just couldn't get a sound out of it that I liked.
Top

I will preface this with I only tried it in a music store and not in my own setup. But I found that thing to be somehow really thin sounding. Maybe I wasn't using it right, but I just couldn't get a sound out of it that I liked.

I never tried it in the flesh, but it does sound off in a lot of videos. A bit too broken, but not in a very musical way. Too bad, I think the concept would be right up my alley.
Top

The Bogner transformer pedals inrerest me more than the JHS. but its one of those things that may not be as interesting as it sounds. Another is the Plasma based pedal.
Yet DAW plugins would be more authentic at getting a Neve sound than actual Neve transformer in a pedal!?
Also with JHS, is it not meant to be a DI box, perhaps not the purpose of putting it infront of an amp if its for direct sounds of desk based overdrive.
Top

A Big Muff that is *not a Big Muff* can do quite a lot in this category. What I mean by that is that one of the most defining things about the Big Muff sound is that mid-scooped tone stack. Its fine for some things but less fine for others. If you remove it or replace it with something a bit more full range the circuit has much more of a drivey feel and much less of a wild fuzzy thing. 70's Big Muffs that had the tone bypass switch that revealed this, and some other manufacturers have also toiled in that zone. About a year ago I did a charity pedal run for the currently offline EA forums (aka the PRF) which was a lower gain muff with softer clipping, clean blend, and most importantly a simple treble rolloff tone control instead of the scooped mids thing. Came out great! 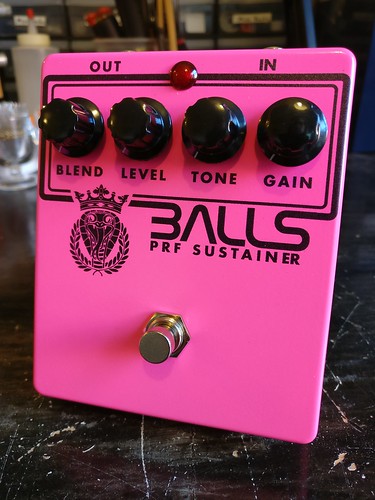 Also while we're on non-standard drives i'd throw in one I make called the Balls Deluxe. The idea is replicating the sound of a germanium rangemaster-type boost slamming the front of an amp, but all in one pedal. Its amp-like drive, but the Rangemaster always adds a bit of chewiness to that drive, where something clean like a Microamp boost wouldnt. Its a fun time: http://ballseffects.com/distortion/balls-deluxe/ 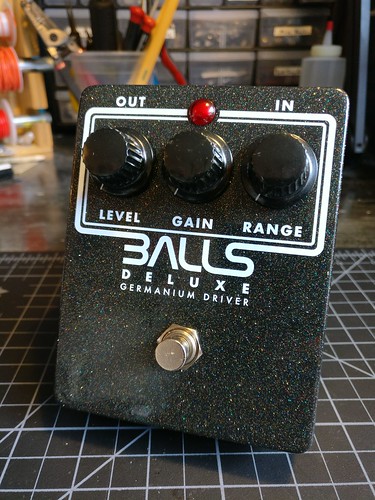 I'll also back the mentions of a Crowther Hot Cake, the Red Llama, and the Rat and all of its variants. All drive/distortion pedals with just a *bit* more of a rough side. Honorable mention to the D*A*M Sonic Titan.
Website: http://ballseffects.com/
Instagram: https://www.instagram.com/thetonyballs/
Top

It's marketed as a fuzz but it's really not - the Selmer Buzztone and clones (Jext Telez, Super Electric). Syd Barrett supposedly used one circa Piper at the Gates of Dawn, it's a dirty boost with ragged edges, sounds full in the low mids to me (ie good complement to a Fender).
Top
Post Reply
51 posts