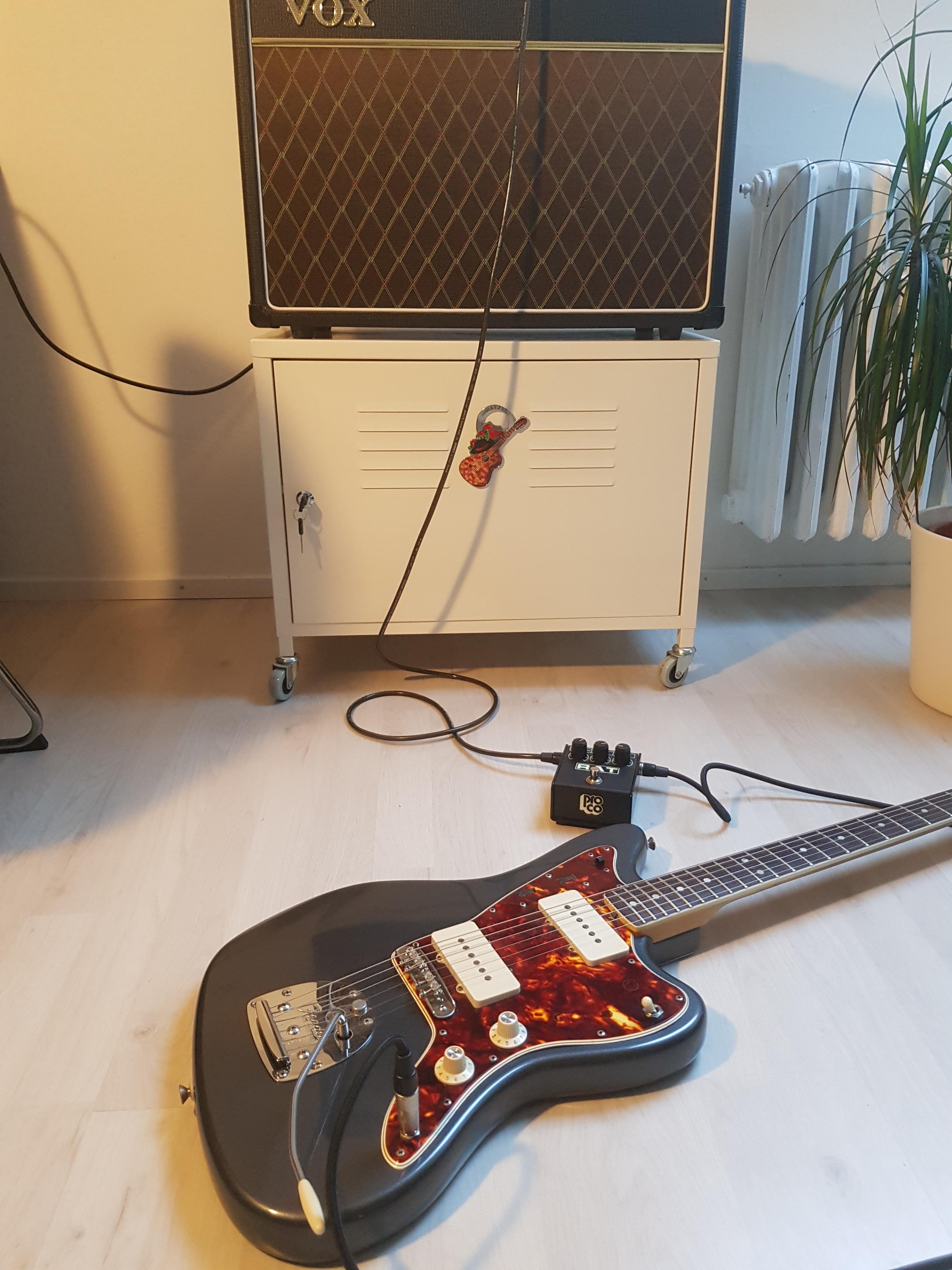 Nothing better than an offset, rat, and a vox. Is that a build, refin vintage or a CFM American original JM w/spitfire?
Top 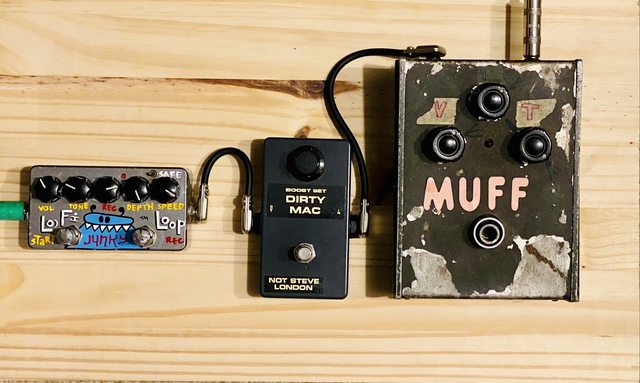 Last night was all Jag into this into RE-150 into Bassman... Dirty Mac and the tall font Sovtek are such a good combo...
Top

Nothing better than an offset, rat, and a vox. Is that a build, refin vintage or a CFM American original JM w/spitfire?

Thanks! Thats a real 65. Refin was done by Ben (workoffire) . It is the the "plays like butter" Jazzmaster

It was butchered and painted purple by one of the previous owners. I really love it
Top

Last night was all Jag into this into RE-150 into Bassman... Dirty Mac and the tall font Sovtek are such a good combo...

Ahh man, I'd love that setup. Those Dirty Mac pedals sound like cool treble boosters. I usually use my TBs before fuzzes, how does it sound after the Muff?
And you find out life isn't like that
It's so hard to understand
Why the world is your oyster but your future's a clam

I'm normally a "boost before fuzz" kinda guy, because I like the way you can change the texture of a fuzz by pushing it without altering its loudness. The Mac is new, though, and I got it in my head to try it in the "more traditional" way - the Dallas Rangemaster was, after all, an amp-top box - and I'm not saying I'm a convert but I definitely see the appeal. It definitely cuts a lot of the lows of the Muff which, in turn, changes it from a very "mid scooped" sound to a very forward thing... it changes the character, but doesn't really change the heart of it, if that makes sense...

I'm hyped to try it with either the Hiwatt or OR this weekend...
Top

Musicmaster Bass into Musicmaster Bass with no Effects at all. The Body of the Instrument is actually Daphne Blue. Very greened out Daphne Blue from the mid to late 70's. An Ebay score from a couple of years ago (it had some ugly silver signature from someone on the front

, I managed to clean that all off

). My late 70's MM Bass had a refinished body so I swapped bodies a while back and I think it's a perfect match. 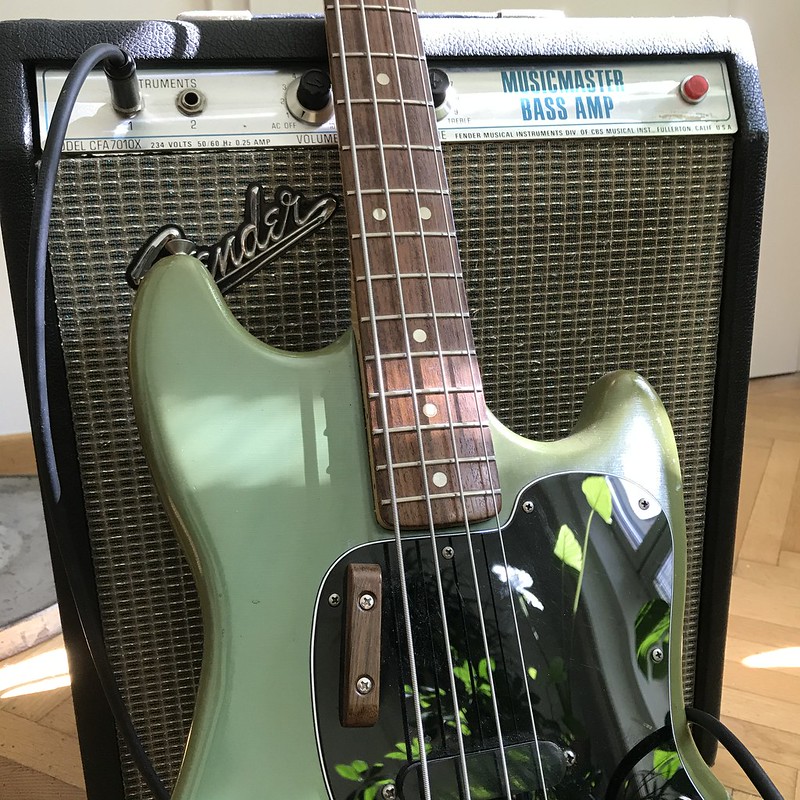 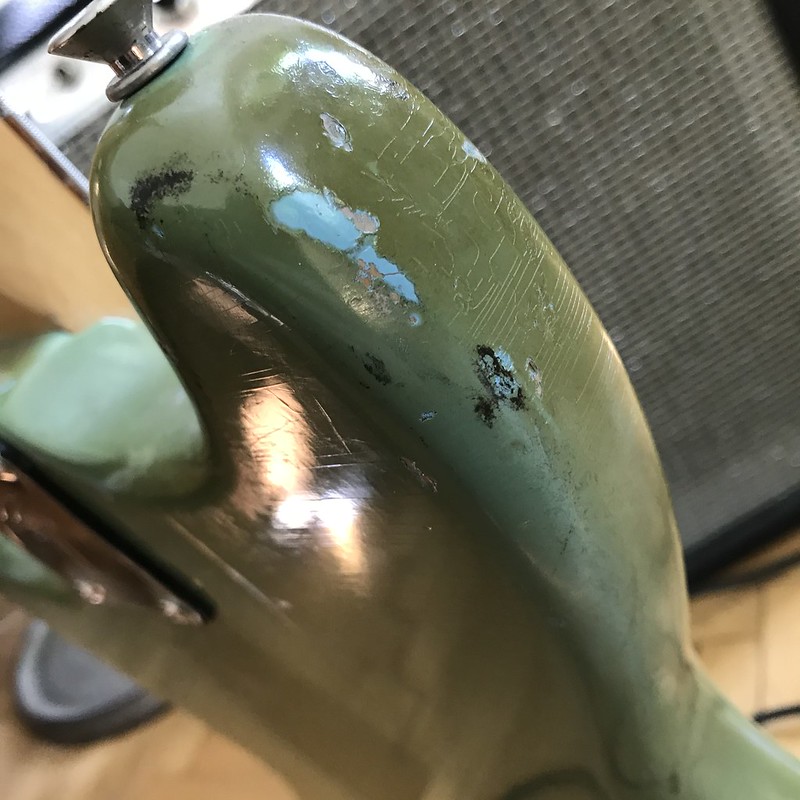 The matching wood thumb rest is everything

thanks. Yes, same shade of brown as the fretboard

I like it too. It turned out great and it's just a generic eBay aftermarket item.
Top

epiphone firebird vii -> chicago stompworks octave up/green ringer -> caroline parabola -> caroline kilobyte -> vox AC4TV
The Fall – The Bad Seeds - The Gories - Royal Trux
"The idea is to put a pick in one hand and a guitar in the other and with a tiny movement rule the world." - David Fair
Top

Played some bass the other day, partially to try out some newer pedals, partially just because I haven't played any bass since the move.

Tried out my new BOSS OC-5 on the bass, thinking I'd prefer it to the FoxRox Octron 3, but I didn't, which is just fine with me. No need to sell or buy anything there. The Octron has more of a mid-focus that cuts through a lot better on bass (with my setup), although I will say that I was playing with headphones on, instead of the bass amp speaker, so that might be something to consider (don't want to sway anyone away from the OC-5 as it SLAYS).

Still deciding what to do for reverb on my bass board. And a compressor. I've got an EQD The Warden, but it's not doing much for me on bass. I thought I'd swap the compressor on my guitar board (Greer Amps Lamplighter) for The Warden, but I love the sound of the Lamplighter too much for guitar.

The BOSS DD-8 is new on my bass board too. I played it on guitar when I first got it a couple months ago just to make sure it works, but this was the first time I'd played it with bass. Perfect delay for bass in my opinion. I also won't need a separate looper with the 40-second looper. That does mean that I won't be able to loop anything with delay, BUT I've been considering an EQD Dispatch Master for my reverb sound, and to use for a second delay to layer them, so I could use that delay with the DD-8 acting as looper if I wanted to if I get one.
Pickup Switching Mad Scientist
http://www.offsetguitars.com/forums/viewtopic.php?f=8&t=104282&p=1438384#p1438384
Top

Getting back into the guitar and pedal game. I sold most of my stuff a few years back when I got frustrated and decided to focus on drums, but now I'm building back up. I got the OCD, Wrath (rat clone) and DelayLab in the last two weeks, along with the board itself and the Supa Charger power supply.

The rig of the day:

I replaced the stock speakers in the vaporizer with some eminence 10" speakers which are significantly more "full spectrum" in their sound. The original speakers were just 100% mids.

The studio lord has DiMarzio 36th Anniversary pickups in it, and they sound fucking awesome. Super clear. People say that good PAF's just sound like a big single coil, and that's definitely what these do. 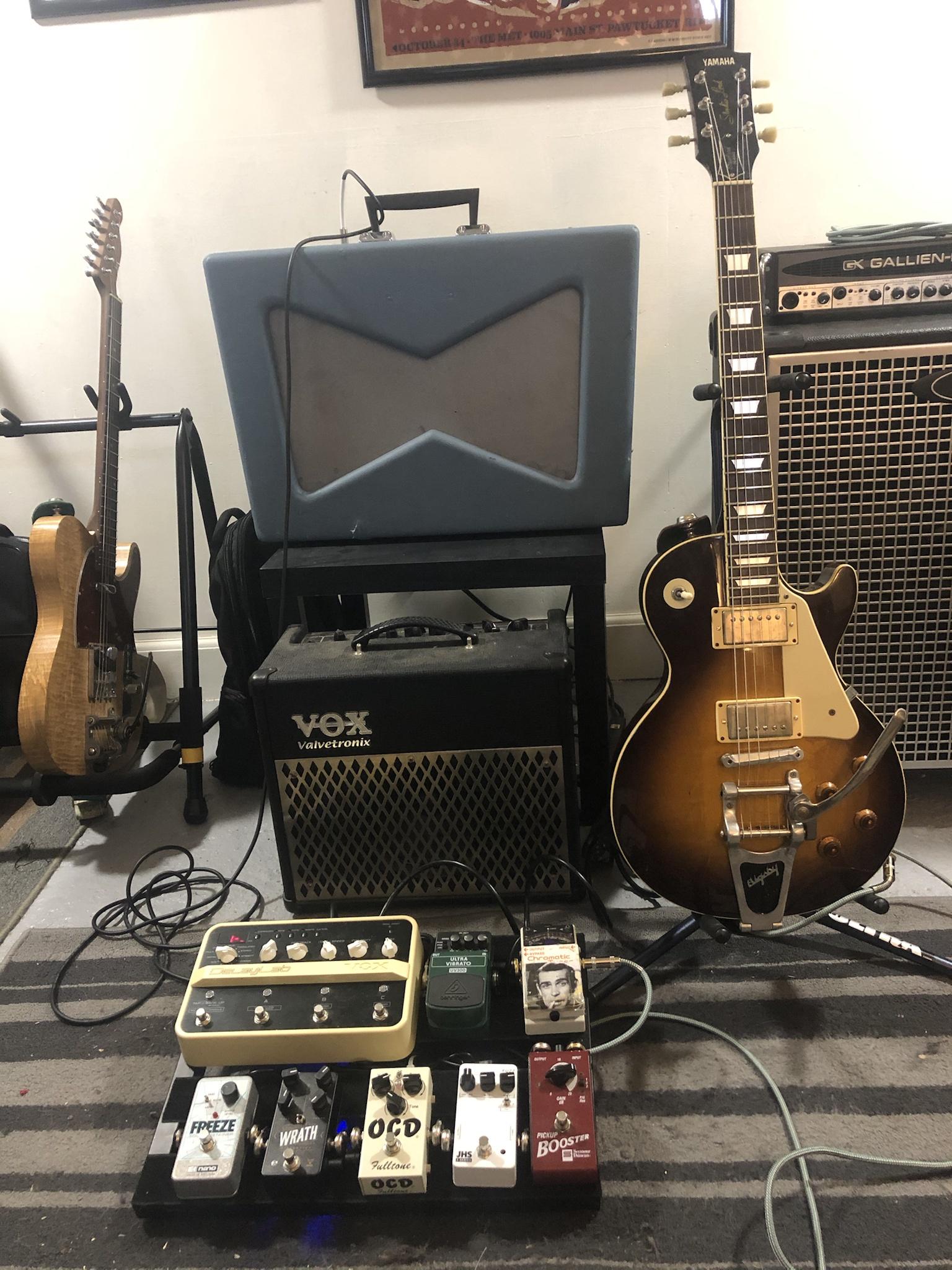 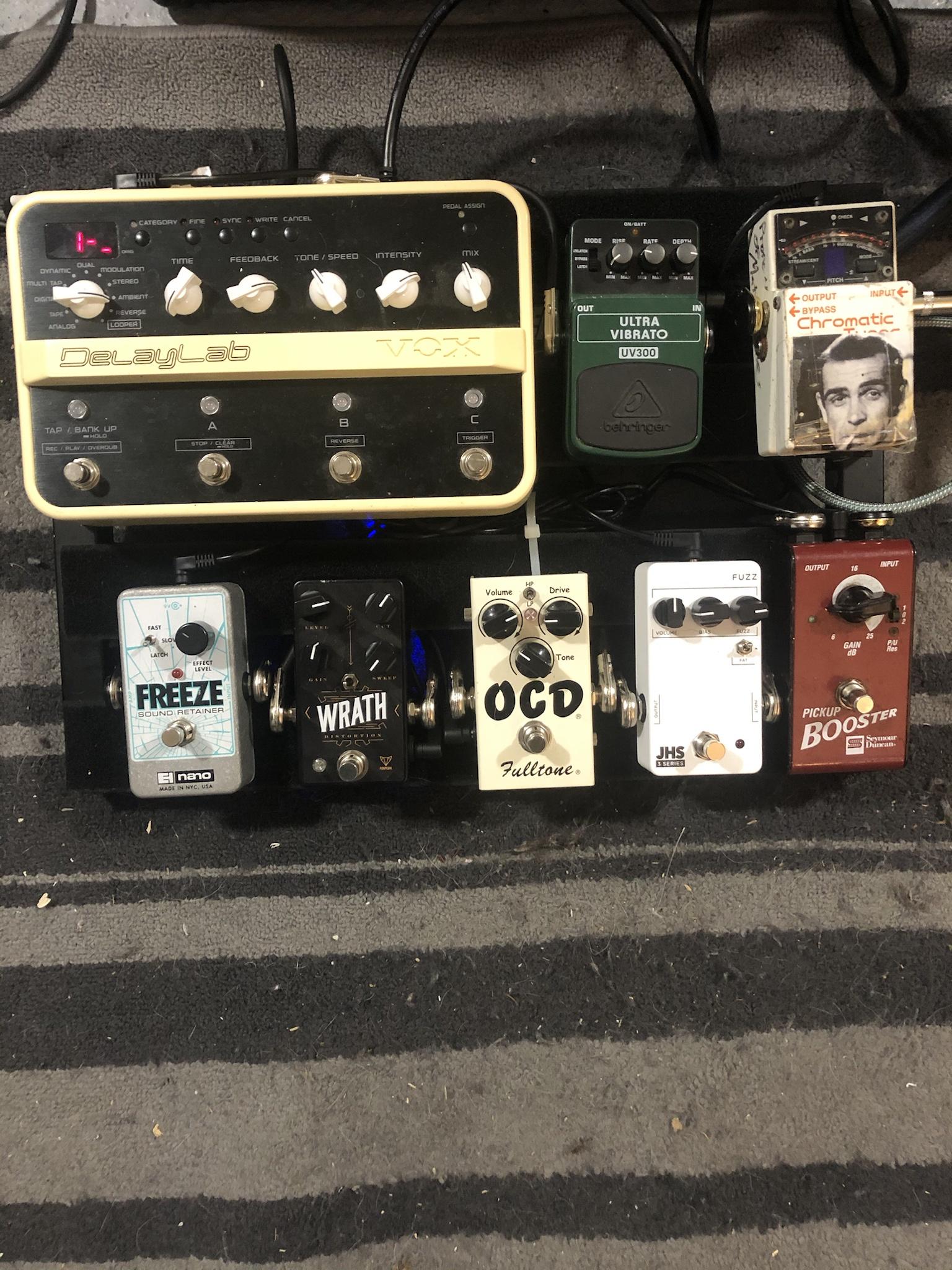 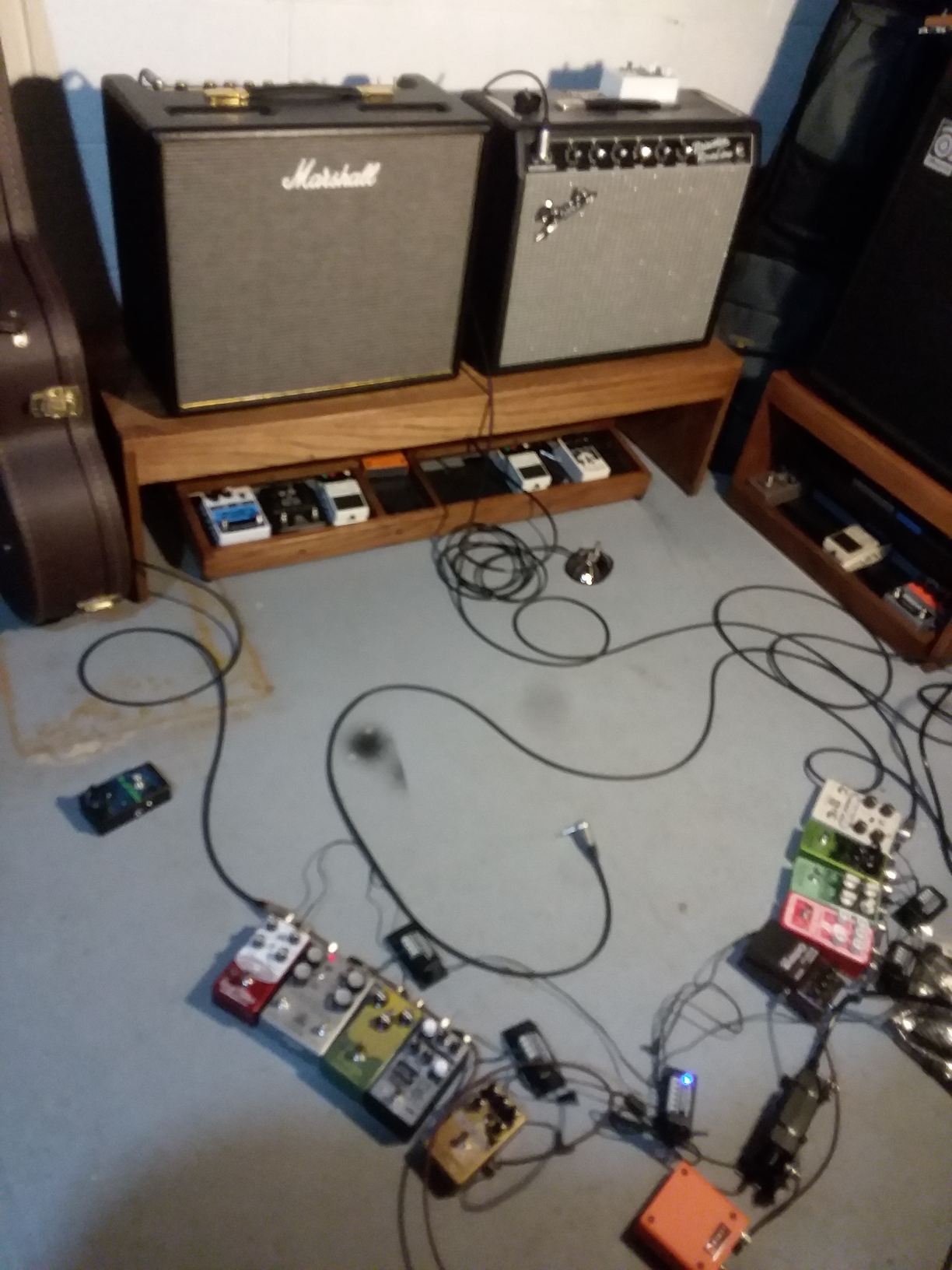 (Apologies for the fuzzy picture. I didn't realize it was that bad when I took it.)

My friend came over Saturday to hang out, and we played some guitar. He and I started playing guitar in high school, around the same time. He's been my best friend since we were in 5th grade. Anywho. He's got an Epiphone SG and an early 2000s Line 6 Spider III. He keeps finding his tone to lack inspiration, so I suggested that he come over and try out my amps. I set up 2 separate mini pedalboards, so we'd each have some stuff to play with, and just had him try everything. I think he wants a tube amp, and some upgraded pickups in his SG, but just got married in 2019, and money is a bit tight. If I can get him to find an amp, I could probably build him some pedals on the cheap.

Anywho! After he left, I reorganized the pedals. I added a passive splitter at the beginning of the chain, and had one set of pedals going to one amp, and the other set to the other amp. Sounded epic.

Running 2 boards in parallel to different amps is awesome. Having similar effects set different in those parallel setups is awesome. I'd have to play with it more, but having 2 different gain types into a different amp isn't as different as I thought it would be, though that could possibly be because of the proximity of the amps. Maybe if I try this again, I'll put the amps facing each other on different sides of the room.

At one point, I was using both tremolo pedals (EQD Hummingbird and Caroline Parabola). The Parabola was set for a medium speed frequency modulation sound, and the Hummingbird was set for super fast ring modulation type sounds. THAT was a really cool sound: pulsing tremolo on one side, and ring mod on the other. It was almost like the ring mod sounds were making everything sound dirty, in a way a typical overdrive couldn't do, maybe like a synth.

This was also the first time I'd ever run my phaser at the end of the chain, and that sounded really really cool. Same with the Echorec at the beginning on the chain. I've run delays first/early before, and I like it, but I don't do it all that often either.

Also, I'm getting to the point that even though my Tele Custom was my only guitar for years, and has ALWAYS inspired me to play, I'm preferring my JM more. I do like the sound A LOT, but I think that the 9.5" radius is a huge part of that too. I'm tempted to get a 9.5" neck for the Tele...
Pickup Switching Mad Scientist
http://www.offsetguitars.com/forums/viewtopic.php?f=8&t=104282&p=1438384#p1438384
Top

Hopping on the "straight into the amp" train!

I've only got good things to say about the octal preamp and 6v6 combo -- smooth, round, compression at low volumes... just all around lovely. 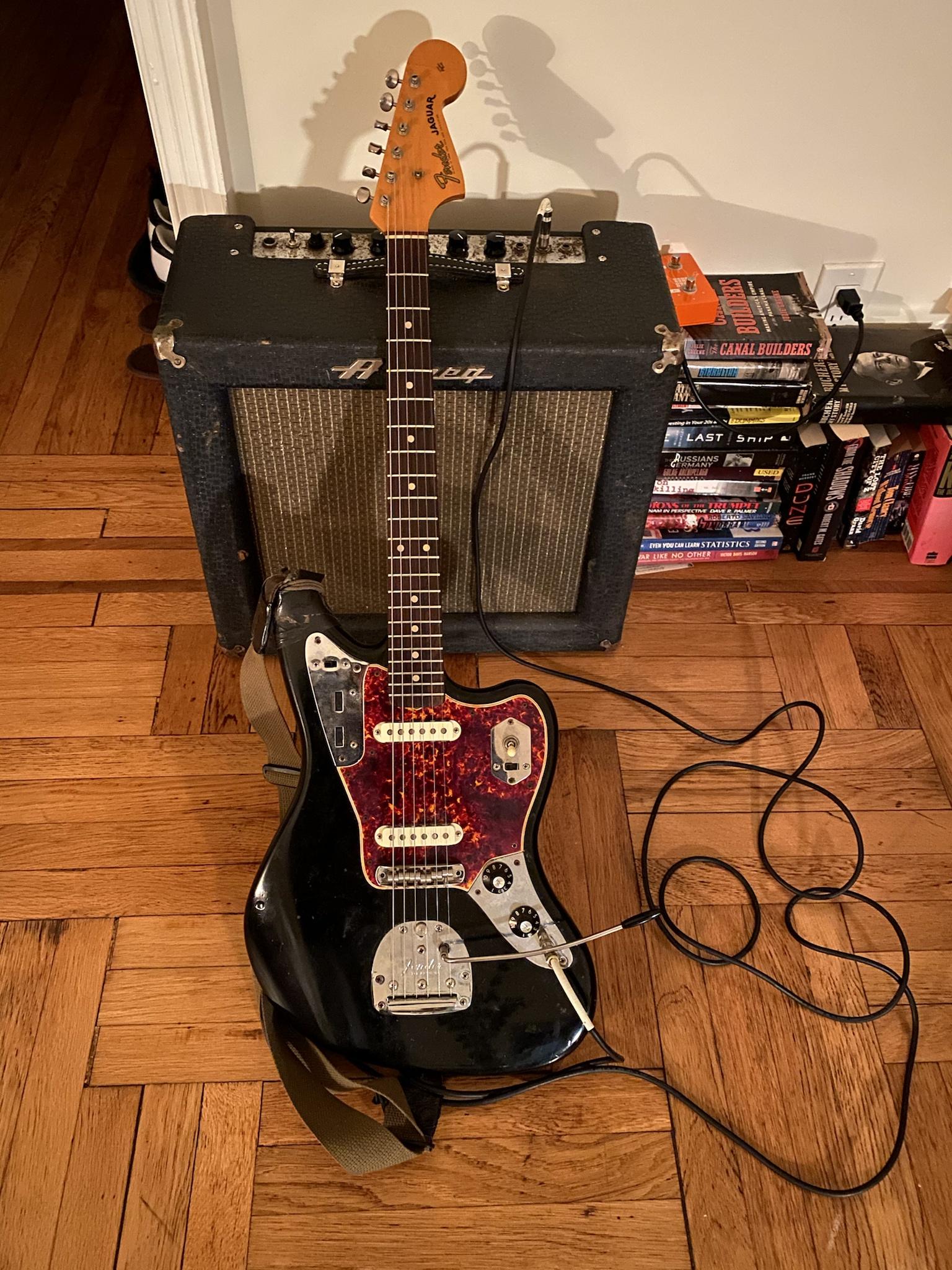 I've only got good things to say about the octal preamp and 6v6 combo -- smooth, round, compression at low volumes... just all around lovely.

What a beautiful looking Jaguar and amp. I’m sure it sounds great
Top
Post Reply
4503 posts