That’s pretty cool. I’ve never played any of those pedals, either, and always read good things about them. Quiet is good, as long as it’s not too sterile when engaged.

Thanks for the rundown.
-David

turned ikea cabinet into a temporary pedalboard. need to add power and move it underneath. the quilter is officially going away since i built a champ for apartment playing. 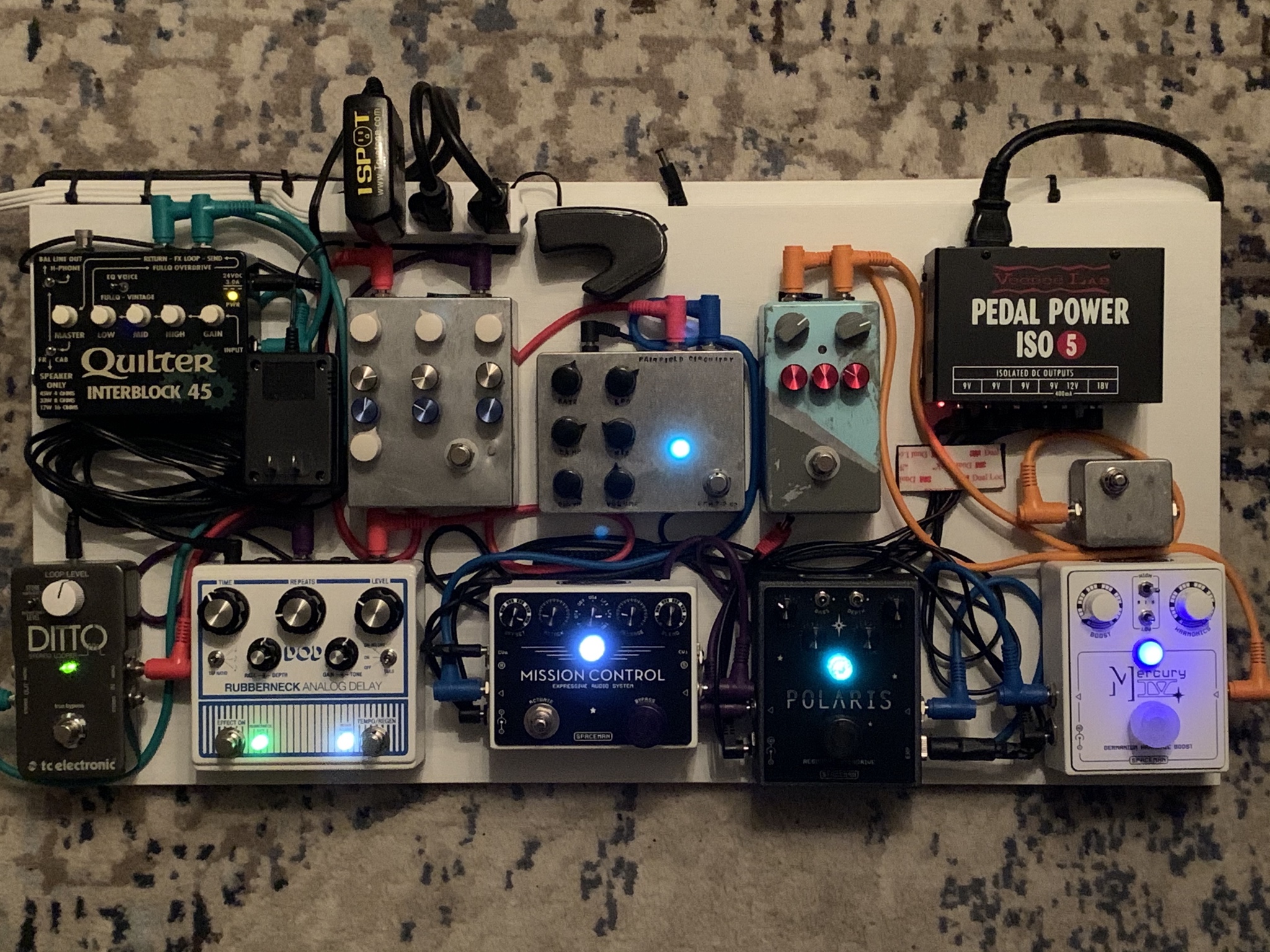 still have to add my super ego and zoom ms70 back in.
Top 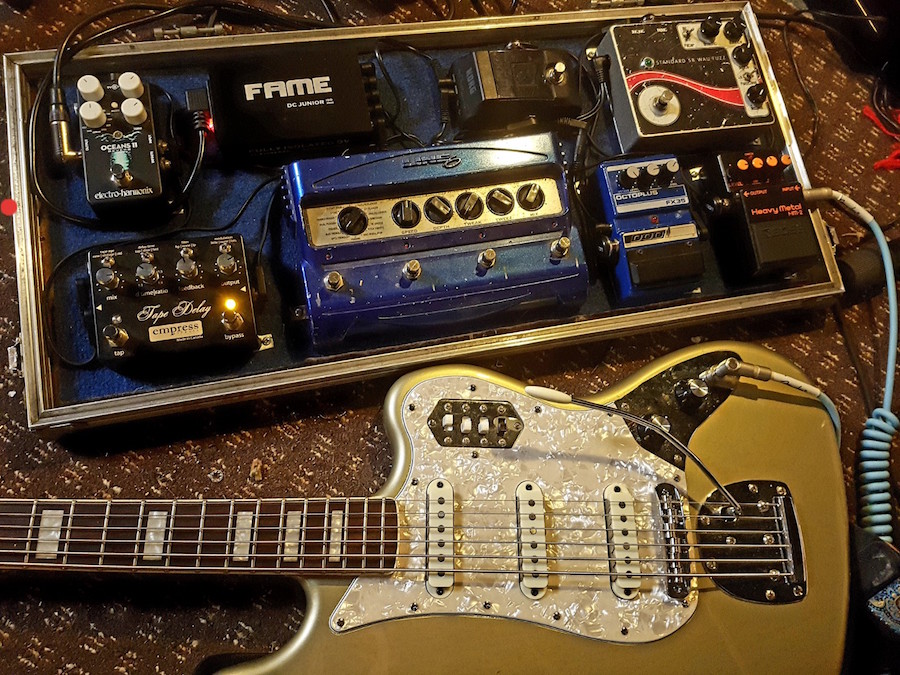 I re-arranged the band board this weekend...

Got this EHX Crayon in the mail this afternoon: 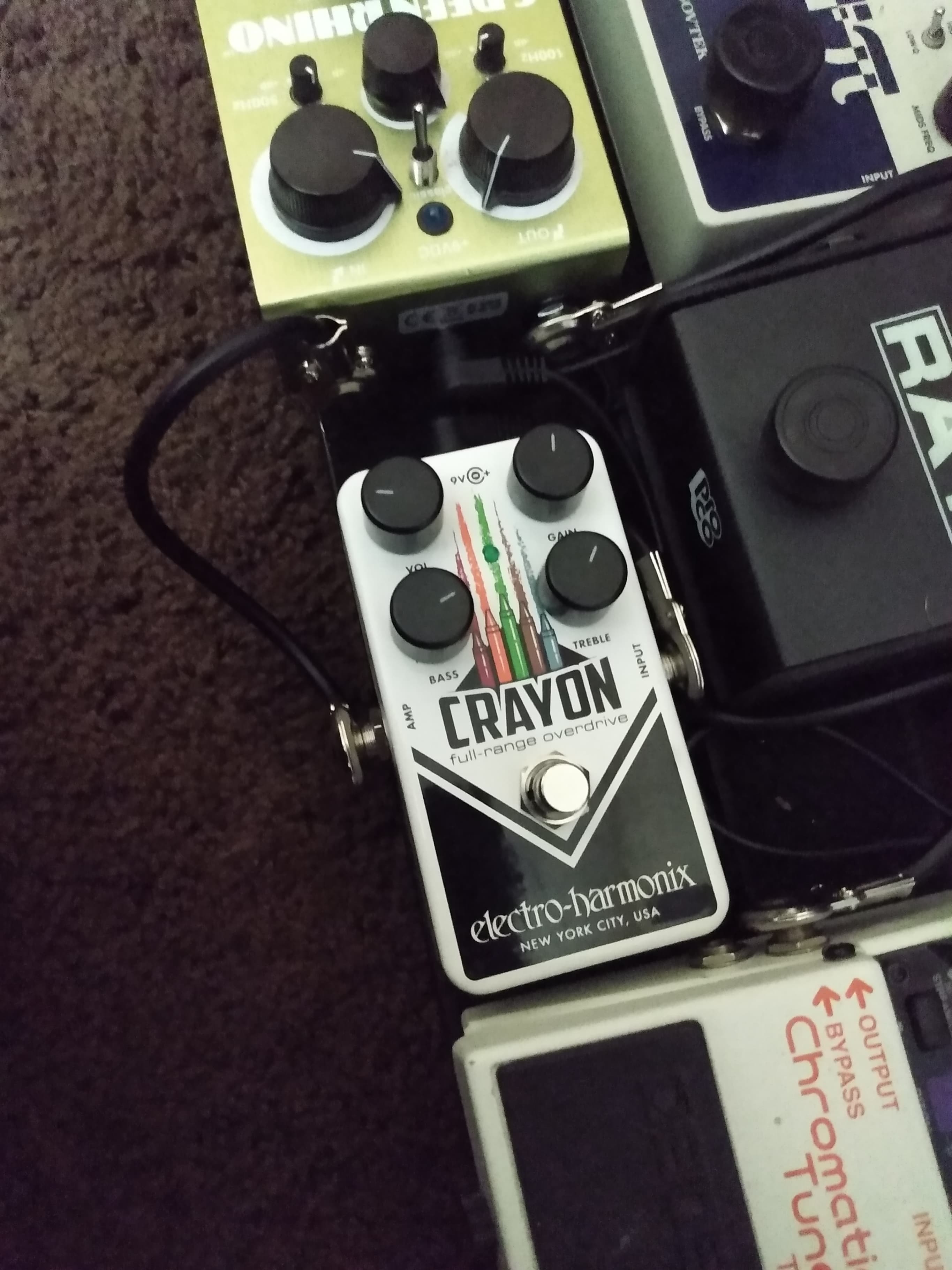 All of the knobs have a tremendous range. I'm impressed. I think I read that the Crayon was a clone of the BB Preamp. If I cut the bass and treble with the drive low it can cop tube screamer tones, but there's a lot more flexibility. The drive gets pretty noisy cranked up, but I kinda like it. Reminds me a bit of a blues driver where you turn it up too high and it gets fuzzy. 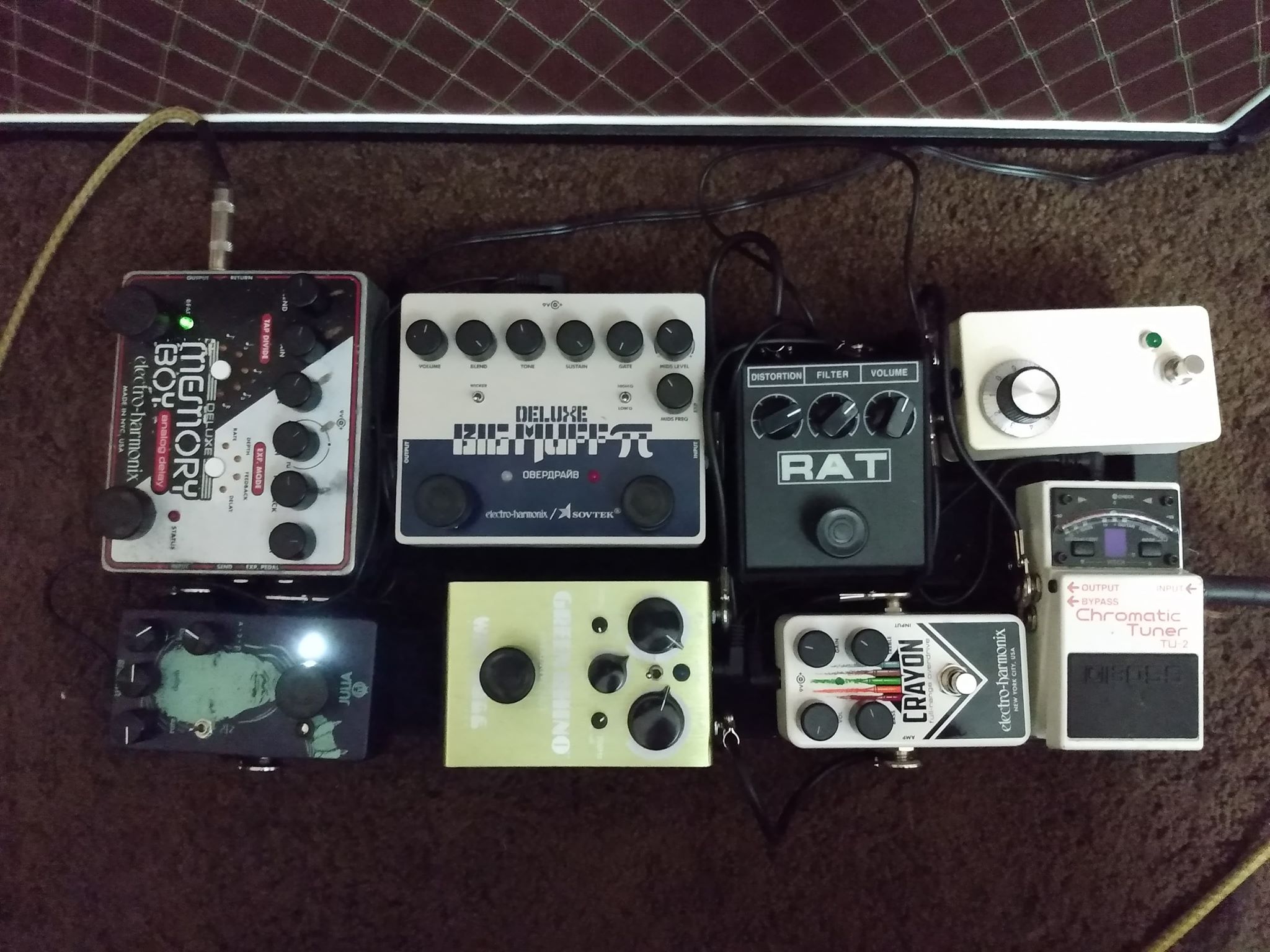 The DIY pedal in the corner is a super hard on clone I built. I don't really need all the dirt. I think the Crayon will replace the Rhino for sure and maybe the Rat as well so I can fit some modulation on there. Plus the cable situation is a bit messy and I'd like to get a new isolated power supply to replace the 1 spot daisy chain.
Top

im reworking my board atm and i wish it looked even half as clean as this
offset guitars resident bass player.
'Are you trying to seduce me Mrs Robinson? Or do you just want me to solder a couple of resistors into your Muff?'
Top

I am a total nerd when it comes to visual arrangement...I do real-life-size mockups in Adobe Illustrator before any changes.

If the effects look misaligned it drives me insane.

Your Pedalboards always appeal to my OCD.
Top

I had a boss GT8 and 8 pedals in the fx loop, but I recently switched to a line 6 Helix LT and kept only two of those pedals: a EHX Big muff Op-amp and and Pitch fork. And once the Helix gets a polyphonic pitch, I'll get rid of that one too xD
Top

Your Pedalboards always appeal to my OCD.

I sold my Boss GT-1000 and went back to pedals a few months ago. Much happier now. I bought these pedals over the past two months, after a lot of research. Arranged on a Pedaltrain Classic 1. All powered by the wonderful Eventide Powermax mounted snugly on the bottom with the Eventide GRIP attachment. 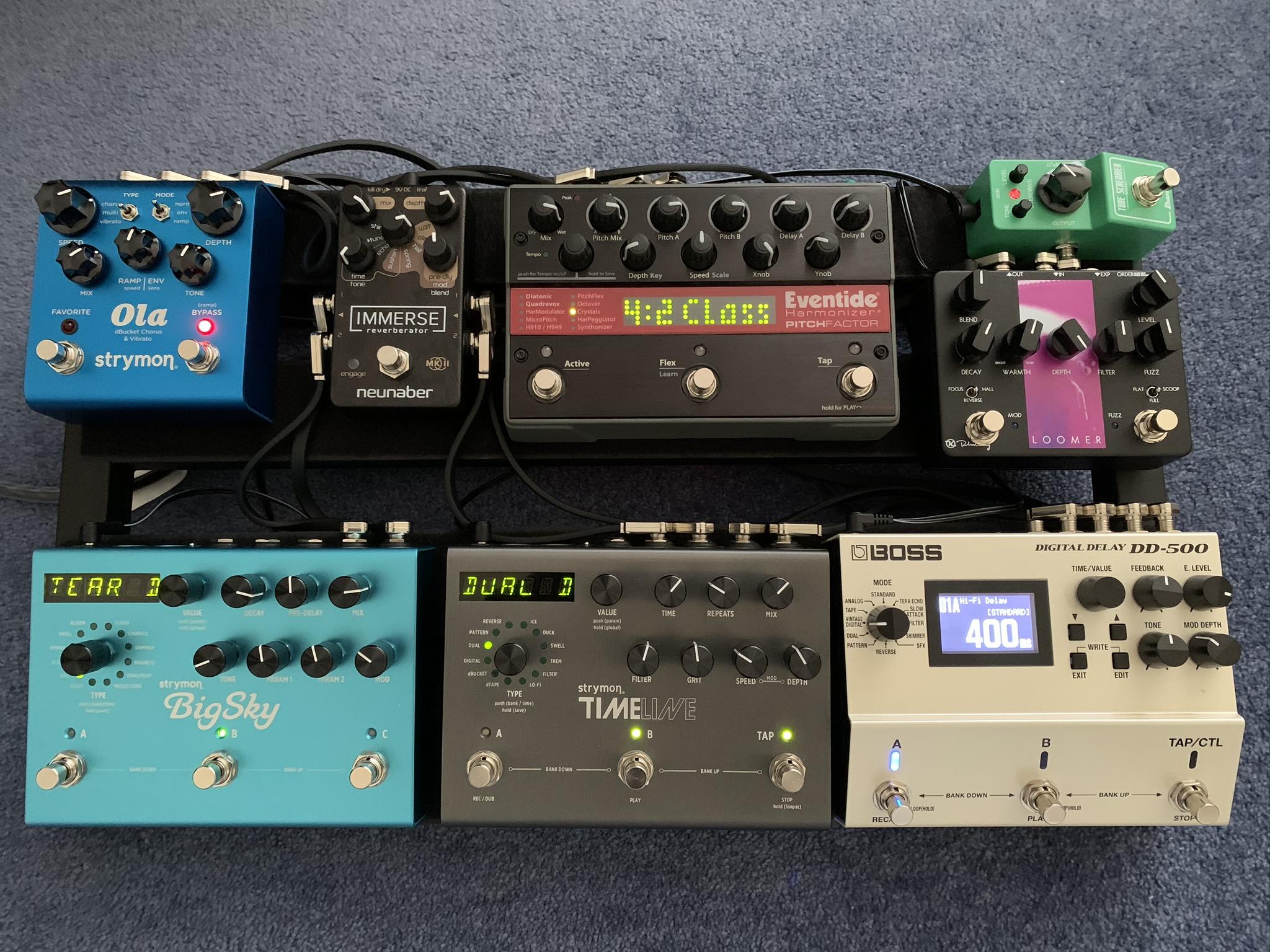 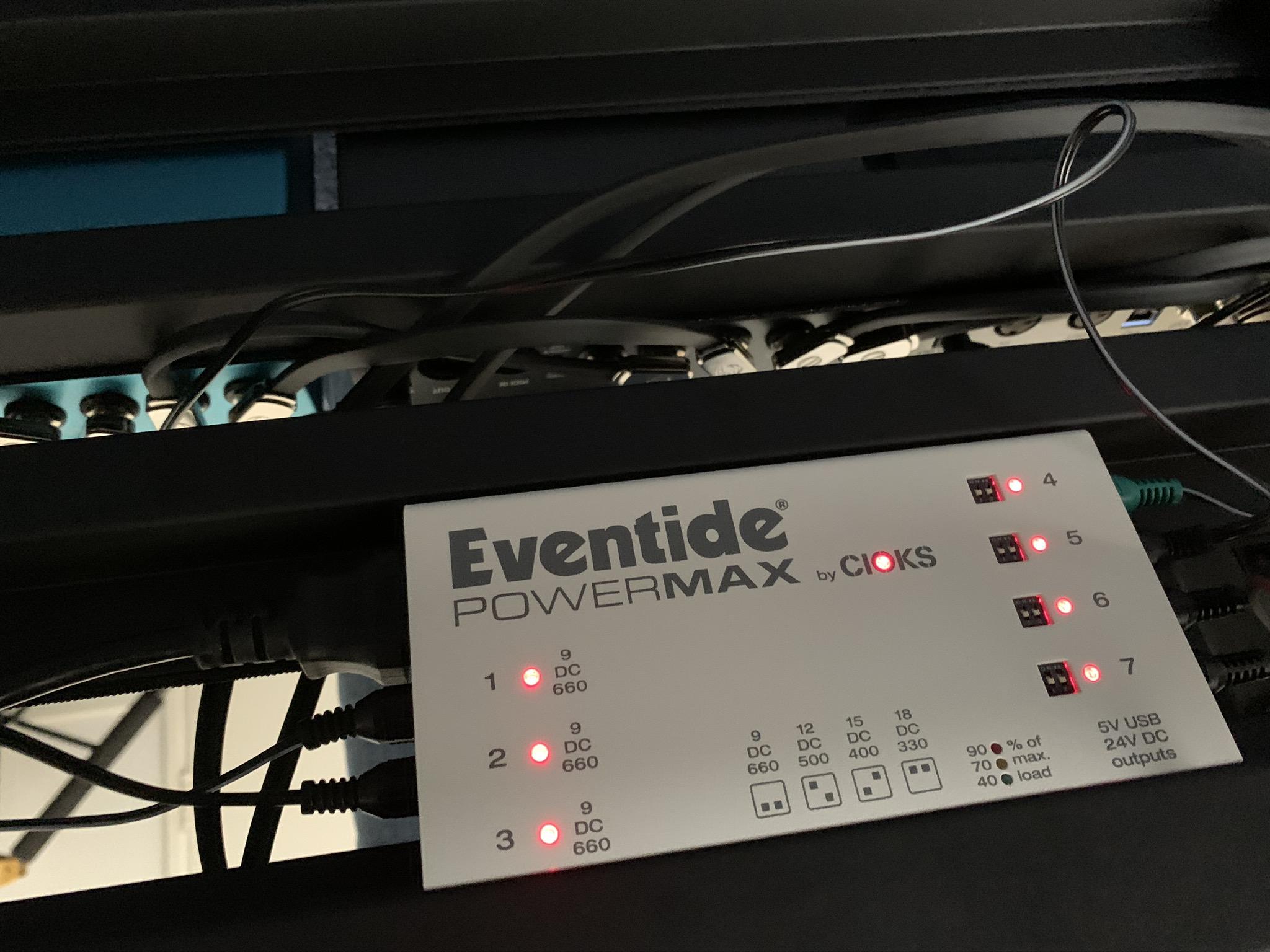 Everything is stereo in and out from the Pitchfactor to the end.

These pedals work well together in interesting and sometimes surprising ways. I had a Boss MD-200 for awhile in place of the Ola but it had a sound that didn't jibe with me (all of the modes sounded generic, bland, sterile, uninspiring, etc.). When I got the Ola there was no going back. The Tubescreamer mini is probably my favorite overdrive sound and takes up almost no space on a pedalboard. I mainly use the Loomer as a Big Muff-style fuzz pedal, because it is great for that sound but it's also more versatile than most other fuzz pedals (I love the tone shaping options with the flat, full and scoop EQ switch). Occasionally I will use it for reverb before delay/pitchshifting as well. Nice to have the option. (I don't play MBV-style so I have no interest in using the pedal as a way to mimic that sound.) The Pitchfactor is full of endless pitchshifting possibilities and incredible sound quality, and as a bonus it has an excellent tuner built-in, saving me some space on the pedalboard that I would otherwise need for a tuner pedal. The DD-500 is for crisp digital delay sounds (which are the best I've heard in a pedal). And the Timeline is for more atmospheric and experimental delays. The two stack together really well. Same deal with the Big Sky and Immerse MKII.

I plan to get a Strymon Flint and Dig soon, and probably use them on a separate, smaller board. Alternatively I might swap the Big Sky for those two, at least temporarily, just to see how that goes. I like the idea of three delay pedals and a delay > delay> reverb/trem > delay > reverb setup.
Top

Been wanting to have a bit more of a flexible setup recently and not necessarily use my big Diago board all the time. My PT-Mini is just a little too small for what I want so I ordered a PT-Jr which arrived today. Very much a lockdown problem stemming from boredom as I'll not be practicing or gigging for a while! I love putting boards together so it has been a fun couple of hours. Anyway, now I've got my new board and optional extension board. ^^ Both boards are great, but I would have WAY more fun with your extension board personally!!

Thanks! I plan to use them together most of the time

The June 60 is great, I really like it. I mean it's a 3 trick pony, but I just love setting 1. For me it's perfect - a lush deep chorus effect. I quite like the simplicity - at least it's one pedal that stops me from forever tweaking!
Top
Post Reply
5990 posts