a nice find, well timed with the return of grey skies -

Really good record as is the first album and the recent remix 12'. I never liked Super Furry Animals, though Gruff Rhys is definitely one of the decent pop stars. I did buy that Neon Neon concept album about John Delorean and quite liked it.

If Gulp turn up in your neck of the woods go and see them they are good live.

OK apologies because nothing is more boring than pictures of fucking records but...

I'm really pleased with closing out the Ghost Box Other Voices singles set today with the final release of Sharon Kraus with Belbury Poly which is number 10 in a really great run of singles. 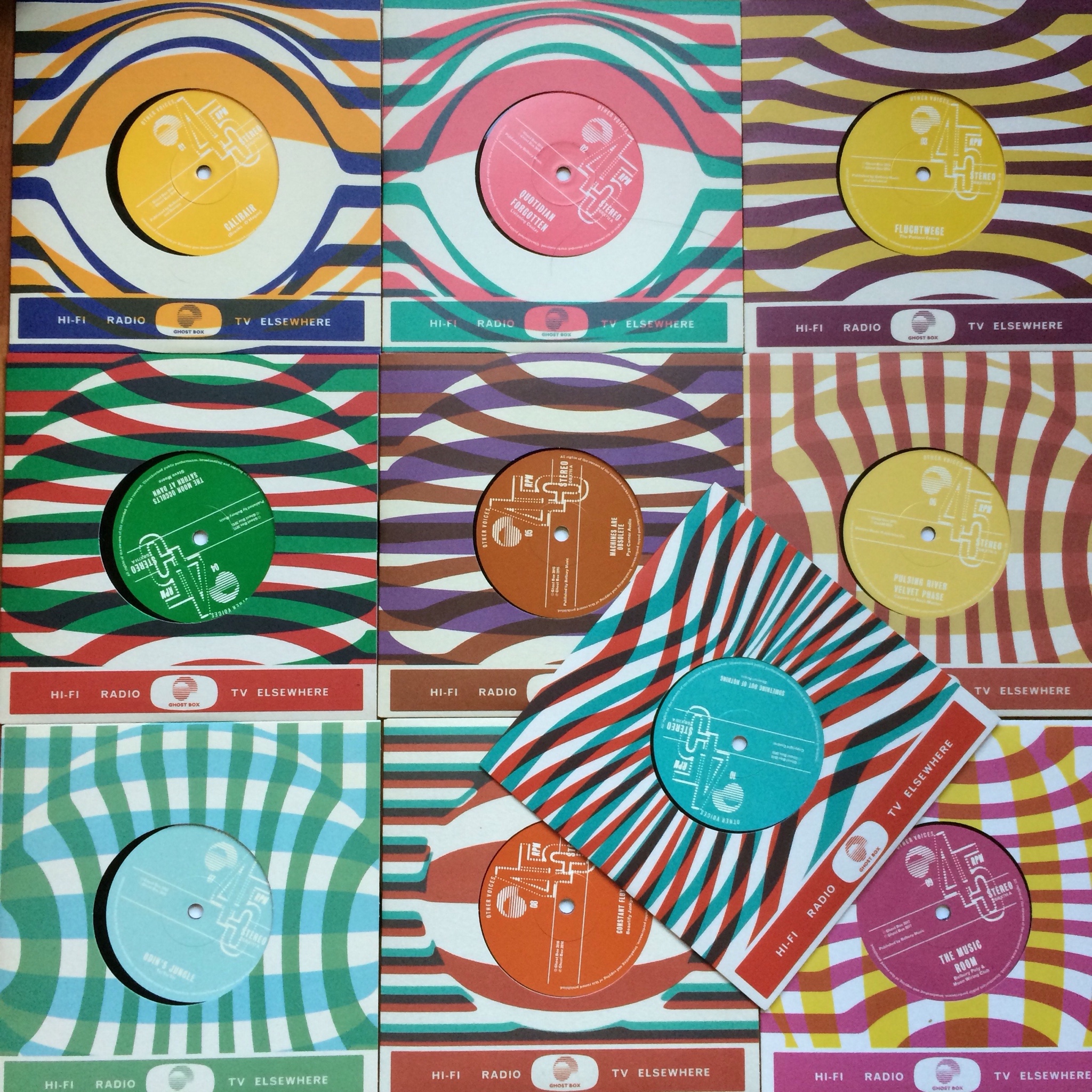 Anyone else been collecting? (digital too)

Your picture shows that these sets should come in nines rather than tens. I have a couple of those 7s and an almost complete set of downloads.

My recent high water-mark has been the recently reissued Music For Smalls Lighthouse, one of those rare occasions where the extra tracks that come with the download actually enhance the whole experience. A splendid bathtime soundtrack!
Top

^It probably won't be much of a surprise to know that I have a few of these.

The album is broadly retrofuturist motorik pop that skirts the edges of jangly post punk, a touch of UVS, library music for German highspeed train documentaries and modularwavedisco.

Bought this (and the new Gulp) and been listening to it over the last few days; really hits the motorik spot, starts with a wheel in early Stereolab territory and strikes out from there. Very much appreciated.

A few spins in and I really like it, you can it out on their Bandcamp; Pram - Across the Meridian

Long term member Sam Owen does a whole lotta Rosie style vocals so you don't miss her too much.

Weirdly, Rosie now seems to be chairing some sort of right-wing debating society. That would make a Monade reunion awkward ..
Distance-crunching honcho with echo unit.
Top

mezcalhead wrote: ↑
Mon Sep 24, 2018 12:28 am
Weirdly, Rosie now seems to be chairing some sort of right-wing debating society. That would make a Monade reunion awkward ..

I followed the link, but it didn't seem that evident to me that it dressed to the right (though I only read a few of the debate summaries on the landing page). What am I missing?


Proviso: don't care for Pram at all, at all, so no dog in this fight anyway.
Top

Maybe the intent is to be neutral, but there are quite a few typical right-wing points that seem to be cropping up:

"is today's sex panic an example of how reactionary feminism has become?"

"Once-lauded British heroes like Admiral Nelson and Cecil Rhodes are today pilloried as enslavers. .. the slave trade has long been abolished, modern-day campaigners keep re-discovering it."


The twitter feed is a bit more obvious, especially if you look at what it retweets .. "PC police" are the "armed wing of the offence culture" apparently.

I see. So what you're saying is....you got triggered?

I feel so let down when creative people whose work I like, or liked in the past turn out to be criminals, predators, or reveal some rather loony views.

It's an undefined spectrum. I don't really know where that 'line in the sand' is where I will get rid of my collection of their works, avoid the films or whatever-- but it's out there.

Having someone caught up in alt-right bullshit comes close, but generally it doesn't diminish the earlier stuff. Or, maybe it does.
Top

^ I don't know. Separating the art from the artist isn't usually a problem for me....says the kid who loved Gary Glitter AND, later, The Smiths. I actually remember seeing some of Hitler's paintings years ago and thinking they were okay. Maybe I just have no soul.

UlricvonCatalyst wrote: ↑
Mon Sep 24, 2018 8:19 am
^ I don't know. Separating the art from the artist isn't usually a problem for me....says the kid who loved Gary Glitter AND, later, The Smiths. I actually remember seeing some of Hitler's paintings years ago and thinking they were okay. Maybe I just have no soul.

Are you a ginger?

I find, again, with this moving target thing, that depending on how much I like the art, I can separate the art from the artist that much easier.

Pedophilia is just about as low as you can go for me. Murder is right up there too. General racism and xenophobia grosses me out, but that's more just ignorance and stupidity. Whining about social justice warriors is a minor offense. I never really liked the Smiths all that much, and aside from that one song, Gary Glitter doesn't register much. Ted Nugent is gross and pretty much always was. More often than not when I hear of some shit-wit blathering on about their stupid beliefs it just confirms what I already suspected.

I have yet to have my heart crushed with someone in my personal pantheon turning out to be a complete bastard. With that said, I regretfully still enjoy certain Roman Polanski movies. I was pretty into Woody Allen movies; now I am not. If the art in question is good enough to distract me from thinking about the artist's transgressions maybe it will slide. I guess I am full of it.

Actually Woody Allen is the line in the sand I'd forgotten about. For years I've kind of despised many of his films for their rampant egomania - literally everything every character says is his voice speaking (to himself, probably) - and for the cast of Upper East Side artist-scholars saying nothing to me about my life, and yet....I saw enough occasional flashes of brilliance to keep me checking out his annual offerings right up until very recently.

The paedophilia accusation, though still technically unproven, did tip the balance finally to the point where I positively dislike him enough to not want to bother with his oeuvre any more.

As for Morrissey, his rubbish post-Smiths songs killed my interest long before his reprehensible views did, but I'm not sure those views would be a deal-breaker if I was actually interested in his ongoing career. Polanski is a good example of the art trumping the creator, though; just being reminded of his back catalogue makes me want to watch The Tenant again. And Repulsion, and Rosemary's Baby, and Cul-de-Sac, and....

P.S. I had hair coal-black as a raven before it turned white.

His soundcloud is worth digging into if you haven't already heard the previous rarities, or if you just want to listen again.
Top

He always posts something on her birthday. Poor guy.

I've seen this song compared to Broadcast, and indeed I can hear little melodic similarities here and there as well as drumming from the school of Come On Let's Go. I think it's alright, if not as enchanting as the mighty Bs; see what you think.