Thanks for the heads up.

I'll have to check the specs against what I've measured on the bridge itself, but this is looking like a good solution. Cheers!
Top

I'd like to join the club... I've got a 1803t body and electronics but I'm missing the neck and the trem/bridge assembly.

I've tried to find both online but no luck so far. Has anybody by any chance seen either for sale online ?

If I can't find a neck, I guess I'll have to use a replacement. But the 25" scale is a tricky problem. Has anybody ever used a replacement neck with these guitars ? If you used a 25" neck, where did you find it ? If you used another scale length, how did you make it work ?

As for the trem, I've got a few ideas, but any help or advice is welcome.
I've kind of made it a rule in my internet life that I'm just not going to listen to anyone who rants about mystical shit like PIO caps in guitars & all the rest of that junk that's objectively busted or so slight as to be irrelevant. - mackerelmint
Top

Good luck? I’ve literally never seen a trem or bridge for sale before. Seen a couple parted out bare bodies and necks, but never hardware or pickups which is crazy considering how cheap these things were forever and the ability to see what insane people did to actual Fenders of the era.

I hope you get lucky and find the parts. I can’t even remember what the routing looks like for the Trem. If you were to end up settling on a different trem system I’d imagine you could install the bridge an extra .5” back and be set as far as scale goes. There are posters here who could probably accommodate your needs as well if you decide to just have a neck made.

Never played a 25” scale before sounds weird, though I’d honestly probably not notice any difference at all.
Top

Talking about trading for an 1802-T that of course is missing the trem bar. This thread is like the most comprehensive place for info on those guitars and FFS even in here I can’t find an outlet to get one.

Really wish I could just replace the collet with one from one of the Squier Offset trems I have piled up :/
Top

Anyone know if this trem system has an actual name? I’m thinking Hagstom called their thing the Tremar, Kahler is a Kahler, Bigsby, etc. this thing was used on a bunch of different guitars and (I think so anyway) across a few different manufacturers, so it seems like it has to have a name, right?
Top

Mechanical Birds wrote: ↑
Fri Mar 22, 2019 6:16 am
Talking about trading for an 1802-T that of course is missing the trem bar. This thread is like the most comprehensive place for info on those guitars and FFS even in here I can’t find an outlet to get one.

Mechanical Birds wrote: ↑
Fri Mar 22, 2019 6:19 am
Anyone know if this trem system has an actual name? I’m thinking Hagstom called their thing the Tremar, Kahler is a Kahler, Bigsby, etc. this thing was used on a bunch of different guitars and (I think so anyway) across a few different manufacturers, so it seems like it has to have a name, right?

I don't think they ever had an official name. After all, model names such as Synchronized Tremolo, Dynamic Vibrato, Vibrola, Vibramute, Tremola and so on are a marketing trick to increase brand awareness. These guitars, on the other hand, were manufactured by Matsumoku to be sold on several continents under a plethora of brands ― Aria, Epiphone, Conrad, Electra and so on ― so, from that point of view, it wouldn't have made much sense to try and establish a name specially for the trem.

Also, while these guitars are fairly common as vintage guitars go, I got a feeling they were never quite ubiquitous enough for their trem to acquire an unofficial nickname. But, as you pointed out, this thread is the closest thing to a definitive knowledge base about these guitars you can find online ― at least in English ― so why not give this model a nickname here and now and wait for it to catch on ?
Last edited by LVC on Sat Mar 23, 2019 12:12 pm, edited 1 time in total.
I've kind of made it a rule in my internet life that I'm just not going to listen to anyone who rants about mystical shit like PIO caps in guitars & all the rest of that junk that's objectively busted or so slight as to be irrelevant. - mackerelmint
Top

That’s a good idea and holy crap thank you for the link on the arm! Looks like they sell trem covers too and that’s awesome. I can’t afford to buy one right now so hopefully the 5 it says they have stay put for a little while till I can drop $30.
Top

I think they have the trem arms custom machined, so there's probably more where these come from. You could contact them if you're worried they might run out of stock.

so I'm not sure whether I'll go on with my own 1803T (re)build project or just sell on my parts. In either case I'll post my notes here hoping they might be helpful to someone.

Oh, and here's a link that should be of interest to Matsumoku guitar enthusiasts... The website has a ton of information on many models, scans of old catalogues and even its own message board: http://www.matsumoku.org/
Last edited by LVC on Sun Mar 24, 2019 4:34 pm, edited 2 times in total.
I've kind of made it a rule in my internet life that I'm just not going to listen to anyone who rants about mystical shit like PIO caps in guitars & all the rest of that junk that's objectively busted or so slight as to be irrelevant. - mackerelmint
Top

What would you expect to pay ? It's difficult to get a sense of one like this, as so many are missing various parts/ other issues..

$$ is always subjective, of course, but for those into these particular guitars, is there something of a 'ballpark' figure you'd work with ?

I see dickheads posting them on eBay for like $500-600 but I can’t ever see actually paying more than like, $350 if it’s local, then maybe shipping if necessary. $400 should be like the absolute ceiling and even then, only if it’s like the 3 pickup version in some insane finish. Otherwise lowball the motherfucker.
Top

So I got the guy in today and was pleasantly surprised at how chunky the neck is, totally the opposite of what I expected. It’s branded with an Aria Diamonds badge and still has the sticker on the back of the headstock for the shop where it was originally purchased. I wasn’t sure how I’d feel about the look, it having a white guard, but in person it looks totally bitchin. I’m missing the trem arm but hopefully will be able to order one in the next few days, but the far greater concern I have are the two missing saddles. The high e is completely gone/no set screw or anything, and the b has the set screw and the weird little piece of metal that actually holds the saddle.

From the small amount of research I’ve just done today, find replacements for the saddles is gonna be a way taller order than finding the arm was ever gonna be. At first I figured it wouldn’t be too big a deal, but upon actually seeing the trem/bridge in person for the first time and reading about how none of the thread sizes they used on the guitars from this era in Japanese manufacturing, it’s stressing me out. I’d hoped I could just use saddles from one of the Squier bridges I have lying around or just put a TOM on it or something but that seems to be a no-go.

Anybody ever dealt with this before and could maybe point me in the right direction? It’d be infinitely appreciated, as always.

I’ve wanted one of these for so so long, actually having it feels pretty good. I can’t wait to (hopefully?) get it into working order.
Top

I'm now the happy owner of a functional 1803T (thanks Pat!

) so hopefully I'll be able to help.

My first thought looking at the bridge is that this design is fairly common on vintage Japanese guitars. I've got a 60s no-name Japanese Mustang copy with almost similar saddles although the rollers are metal. Here is the bridge, with a roller saddle from the 1803T for comparison. They are very much alike and the same height; the Mustang copy's saddles are a tiny bit narrower but that wouldn't be a problem. The screws on both are interchangeable (same thread). 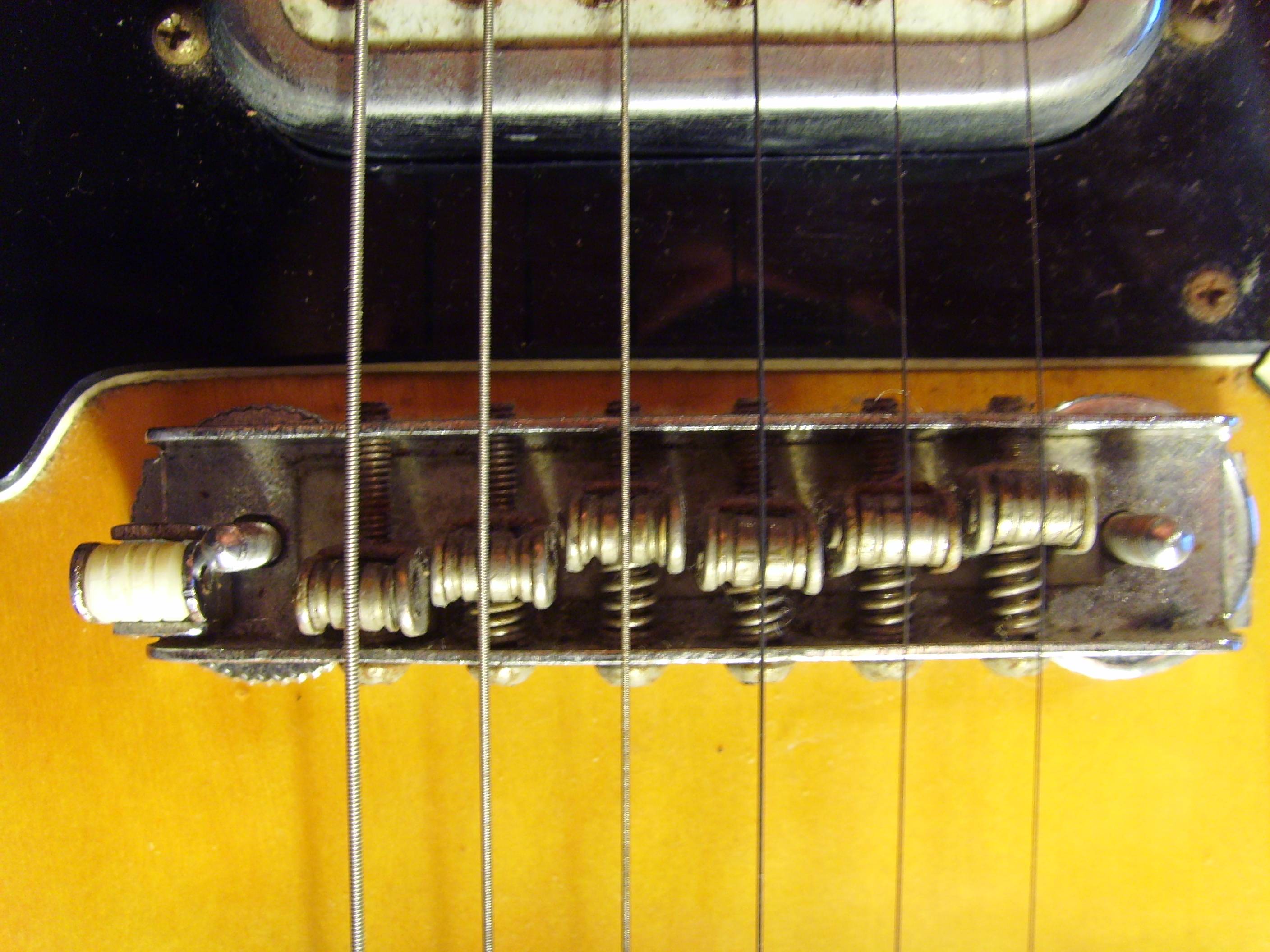 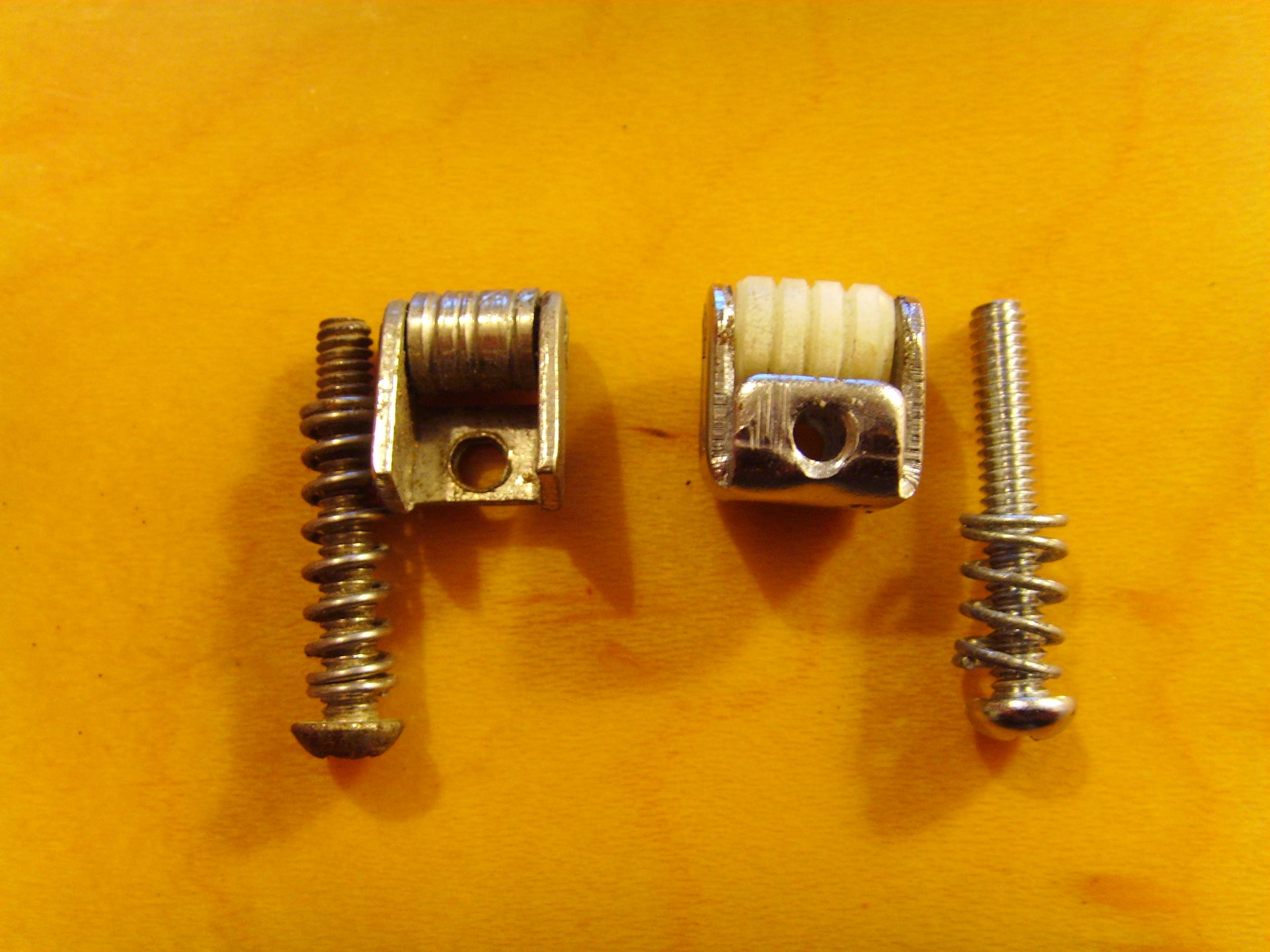 So I guess one option would be to search for "vintage roller bridge" or "Teisco bridge" on eBay and Reverb. Some vintage European guitars (e.g. Ekos) have roller saddles that look close, but I don't know if they would be the exact same size.


Next I tried barrel saddles with height adjustment screws from my Squier Bass VI (same as on the VM JMs, Jags & Mustangs) but unfortunately they turned out to be too wide. 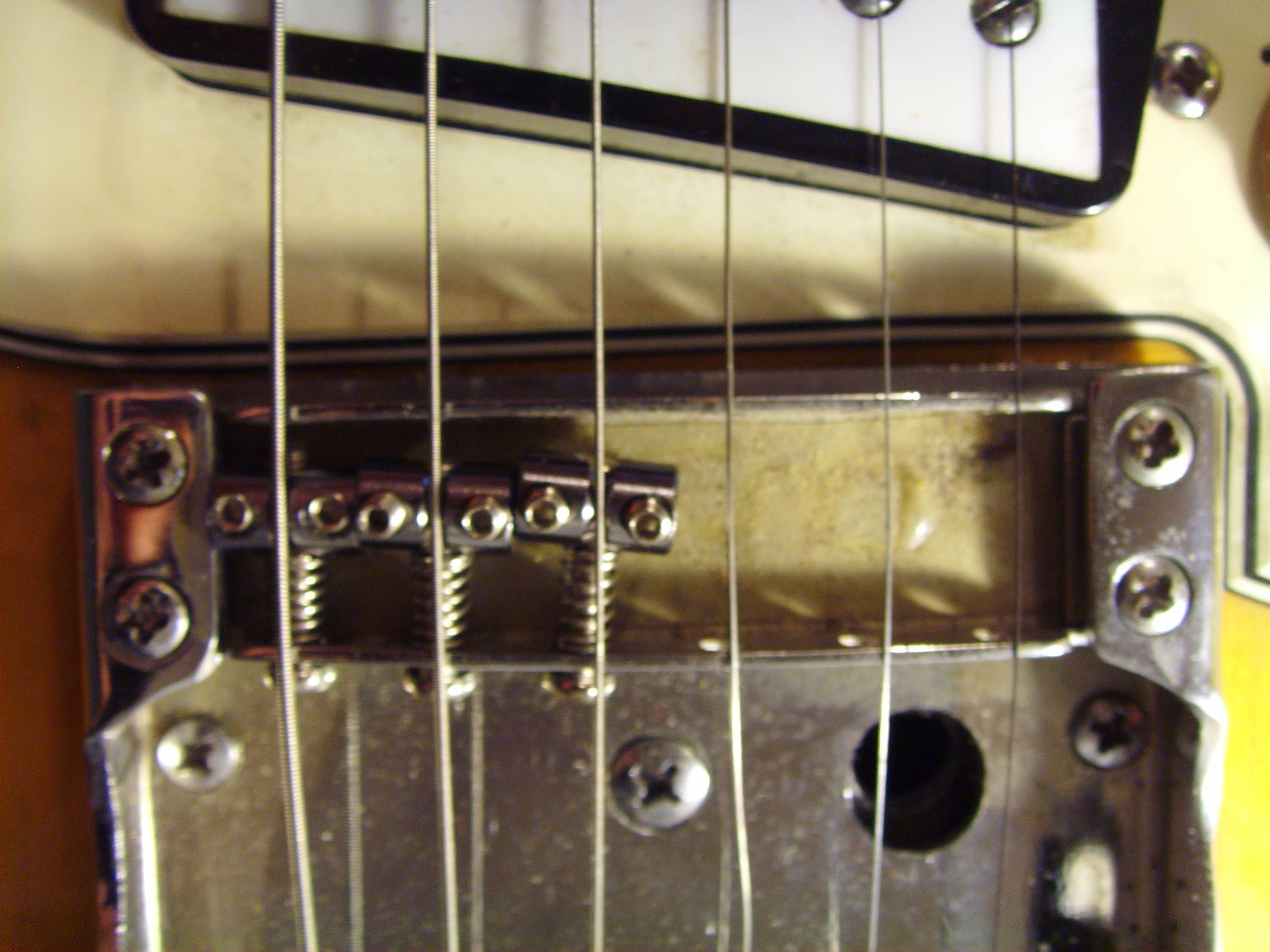 I also have one of those Mustang bridges with gaps between the saddles (as a result of having narrower saddles). Those look like they could work widthwise, but unfortunately, as a result of not being adjustable for height, only the two middle saddles would be tall enough for the string to clear the bridge's front and back.


Finally I put a spare Wilkinson-style roller bridge next to the 1803T bridge and I noticed they were quite close in size. It looks like the former would fit snugly inside the latter if the ends were cut off. That looks like it would be a rather laborious job, but i could be worth it. On the Wilkinson intonation is adjusted by sliding the saddles and pinning them down with screws from the top, so putting the whole bridge inside the 1803T's shouldn't hamper that. 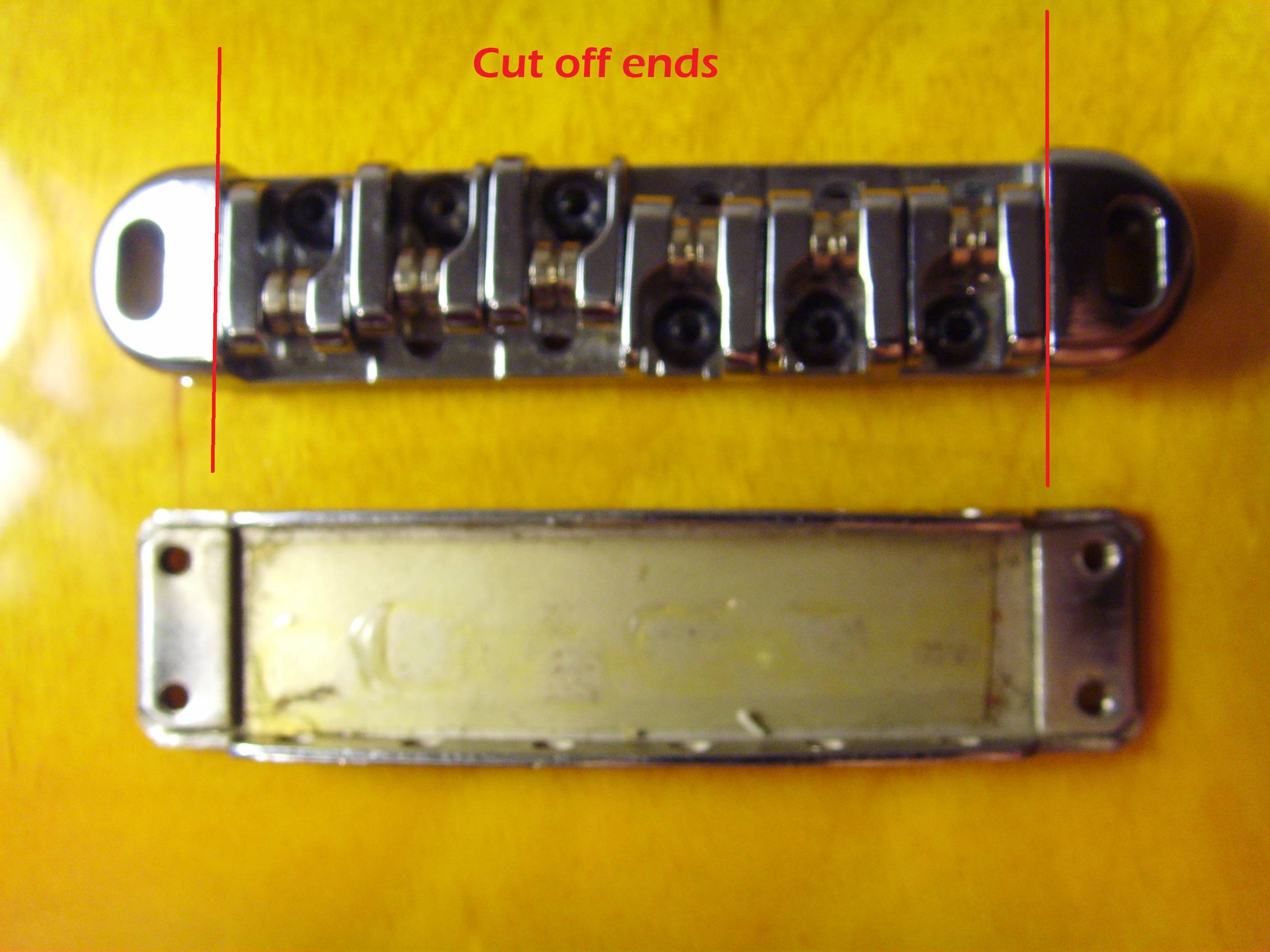 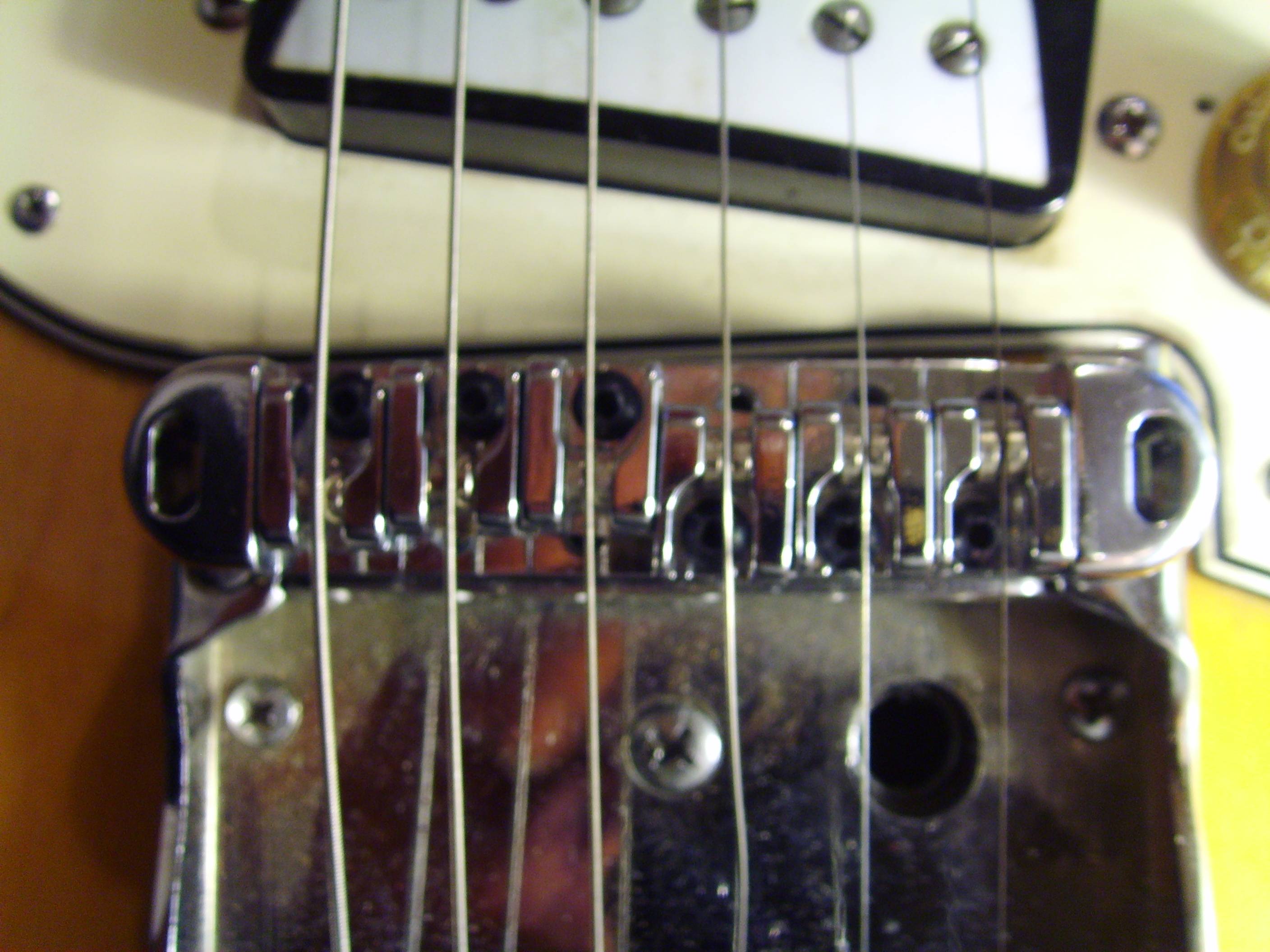 I hope that will be helpful to you or anyone. I'll keep posting my notes in this thread now that I can take measurements on a complete 1803T.
I've kind of made it a rule in my internet life that I'm just not going to listen to anyone who rants about mystical shit like PIO caps in guitars & all the rest of that junk that's objectively busted or so slight as to be irrelevant. - mackerelmint
Top

User Spellcaster quickly reached out and was an amazing help with a bridge. Thank you though for the info hopefully someone can use it
Top

since 8 years i have this one ,i only do a speed fret job to try cause the fret were too much worn ,and before a refret it is good try
result i don't like speed fret
then i have some time this week ,fretwire lets do a refret !
the body full cleaned polished ect .... (not sure the color is original to the guitar maybe a refin but i love the way the paint is white yellowed really like thecolor of the pickguard ) 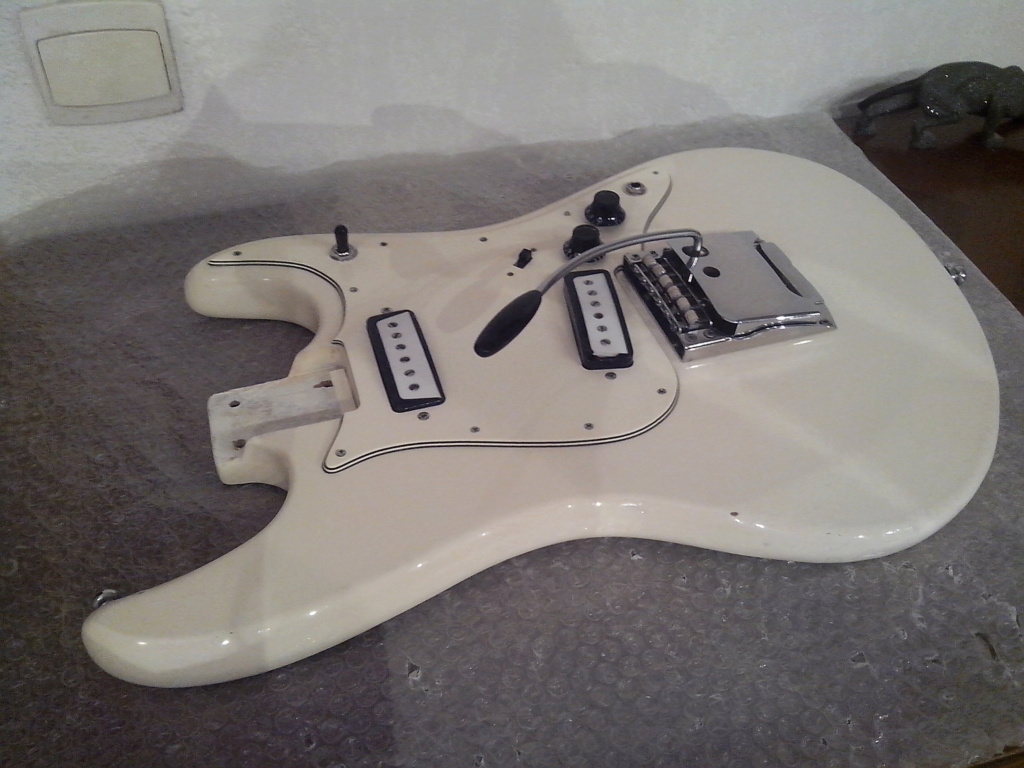 wait the neck who is in the garage for refret 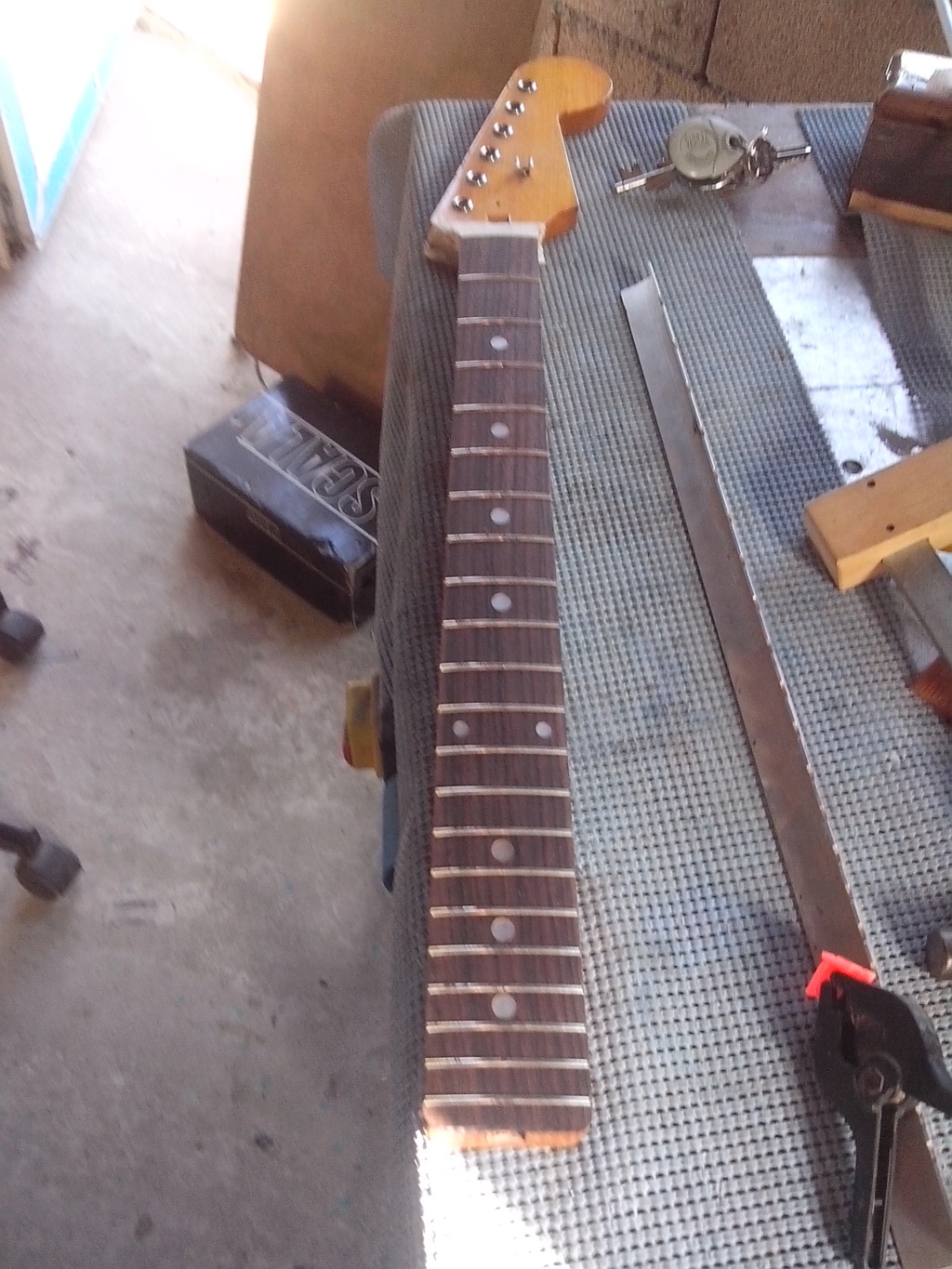 i have some surprise ,the fret were hard to pull out ,and the rosewood was brittle (really brittle)
i think will try to salvage the varnish but there is too much ding on it 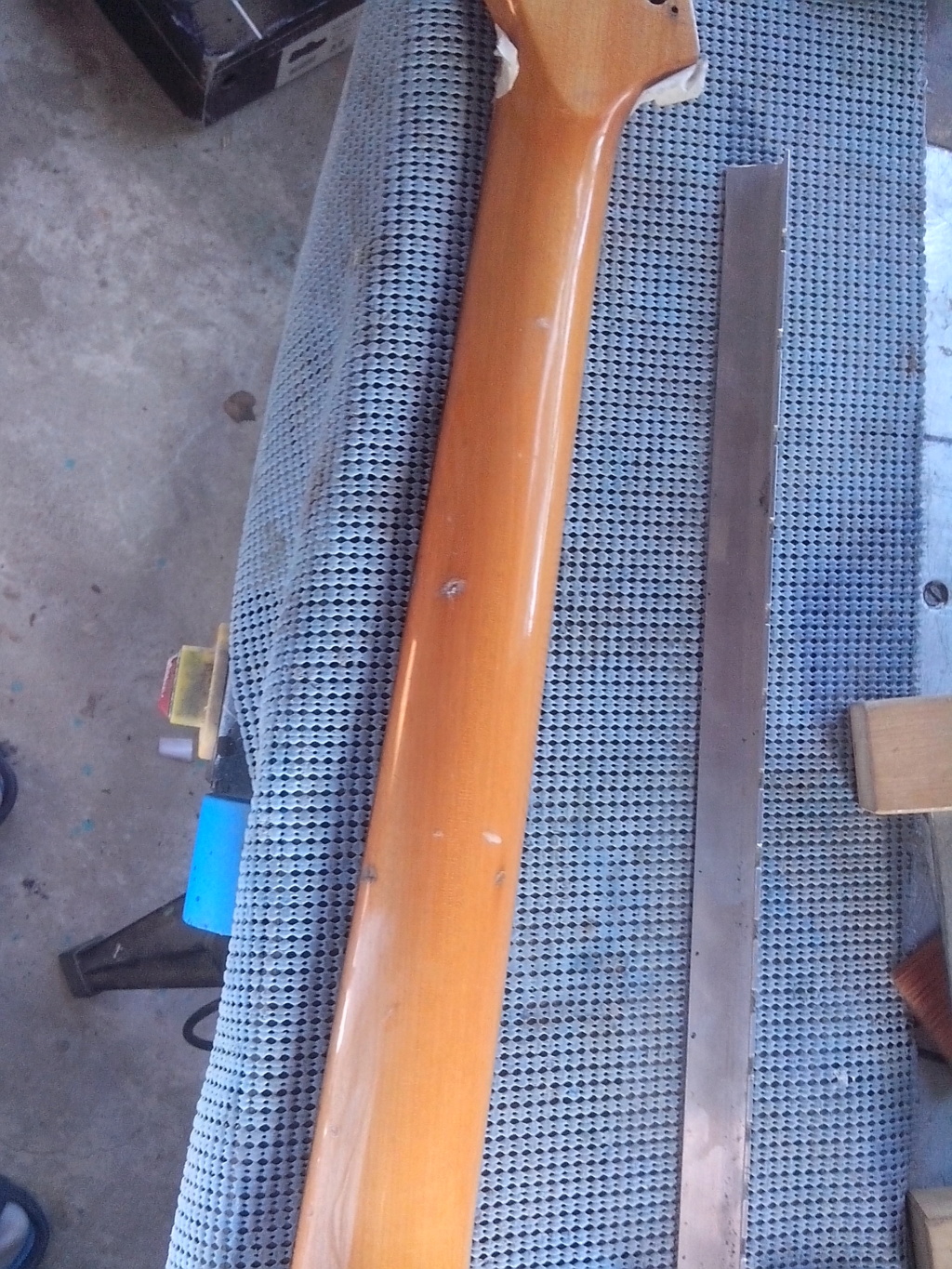 ,to bad i love the yellow tint on it ,but if i want something cleaner i will have to sand the all thing to wood ,steam the divot ect and redo a new varnish on it
Top
Post Reply
257 posts