this one comes up every so often, the dude sometimes tries to sell it on facebook saying it's worth like $5k

What I don't get about hack jobs like this one is like... if you have a Jaguar, but you want a Les Paul, just fucking sell the Jaguar and buy a Les Paul. Why hack up a perfectly good guitar to turn it into something completely the opposite of what it actually is, especially when the thing that you want already exists? No no, let's bust out the router and have a fucking custom vibrato plate made!

I'm REAL perplexed by the vibrato plate here. I mean, whatever the orig Jag body was...it looked to be a hard tail and ...why would you ever put a plate on that has no purpose whatsoever?! There's not trem cavity under that right? It's just "I got a weird hair up my ass and decided to bolt an unnecessary piece of metal here for no reason."

Well besides all the obvious cruelties I find the pickguard quite cool. More knobs can be okay.
And well this might have been done before the idea of such a thing as a hard tail plate was common knowledge...
Top

This one is pretty minor by the standards of this thread. I really like Magnatones - they're kinda weird, and relatively affordable for good-quality 50's-60's USA electrics. I found a 60's Tornado and a 50's Mark III that I love to play, and I'd been looking for one of the nice Rickenbacker-meets-Mosrite ones from the late 50's / early 60's.

I picked up one on eBay for a not-bananas price, but with some unfortunate mods. ...but nothing that's impossible to repair. It looks like someone installed a few different pickguards, crudely chiseled the neck and body to install a neck pickup, drilled a bunch of holes in the body for a bridge pickup's adjustment screws (HEY, EVERYONE - PSA! CLIP THE SCREWS INSTEAD OF DRILLING THE BODY!) and drilled it to install some sort of gibson-type bridge or stop bar and a surface-mount Kent or Teisco tremolo. 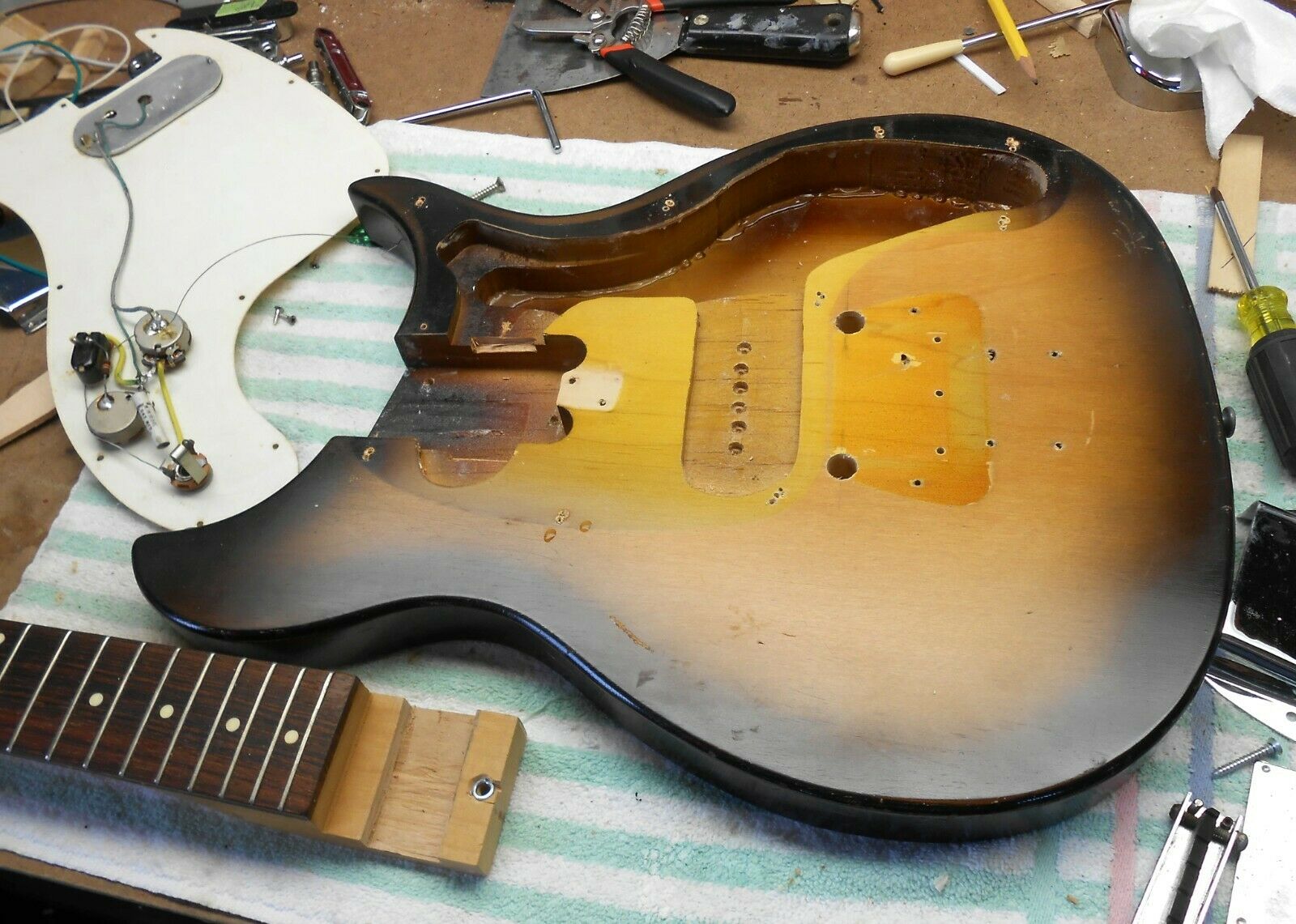 I guess those are all pretty standard bits of weirdness for a guitar that's been on the earth for 60+ years.

...so then I'm doing a bit of research and see a Magnatone on Reverb with the same wear to the body - exact same scratches and chips. ...but no mods. So it looks like all of the ham-fisted hacking happened in the last year or two? 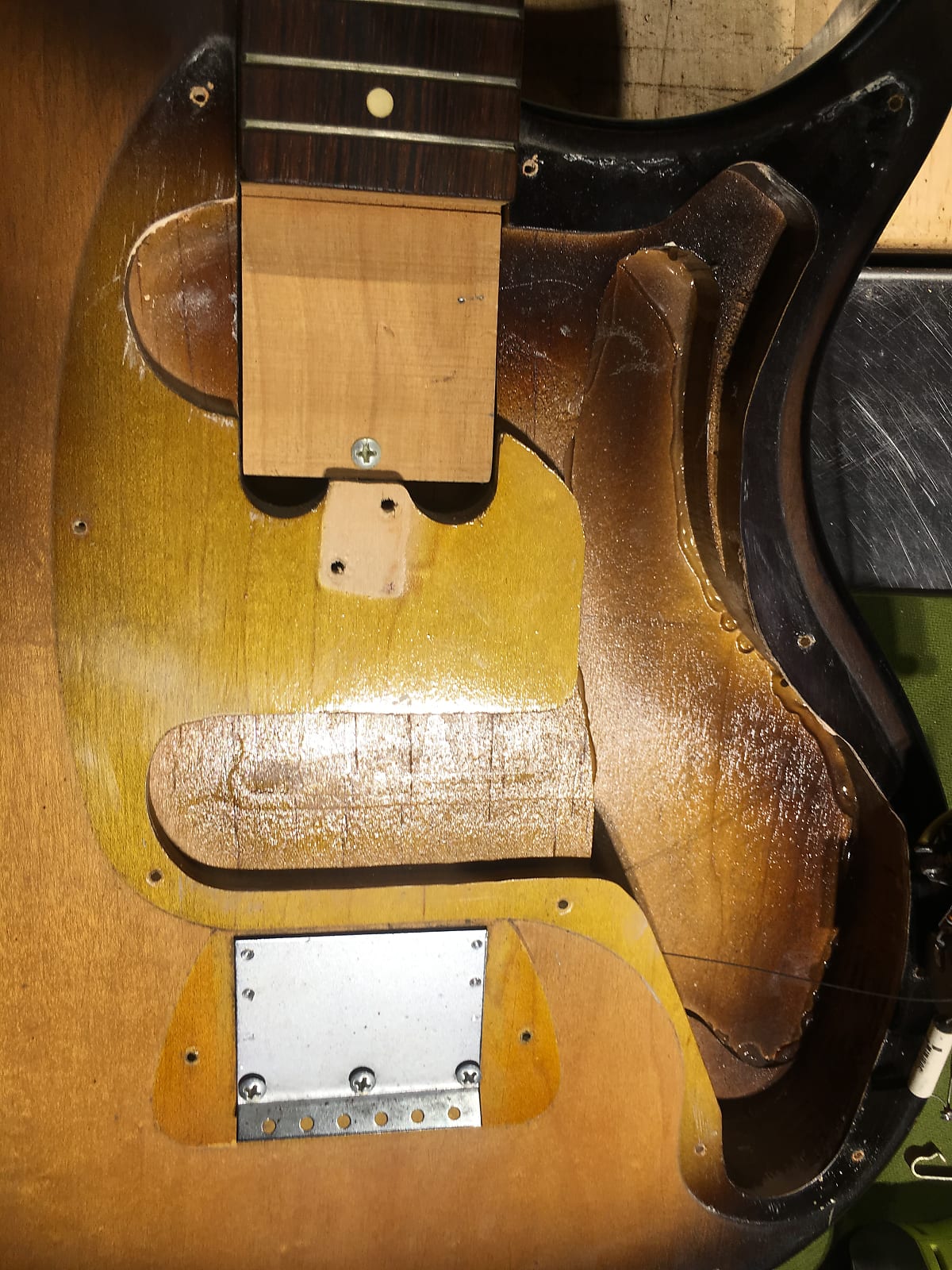 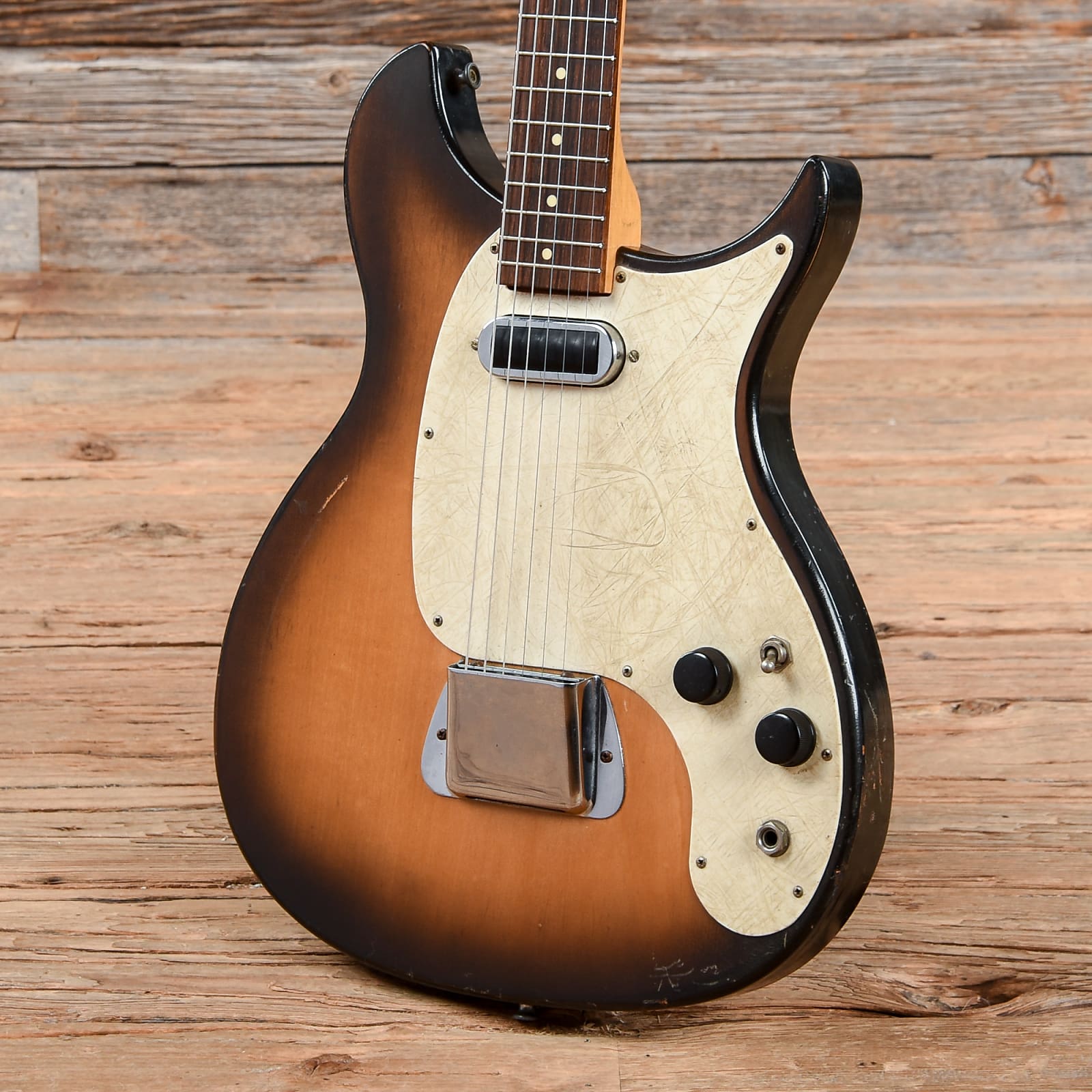 C'mon folks. If you want to do something stupid to a guitar, there are literally thousands of better, cheaper targets.
Top

Need to strip paint? Why not use an angle grinder with a 40 grit disc? 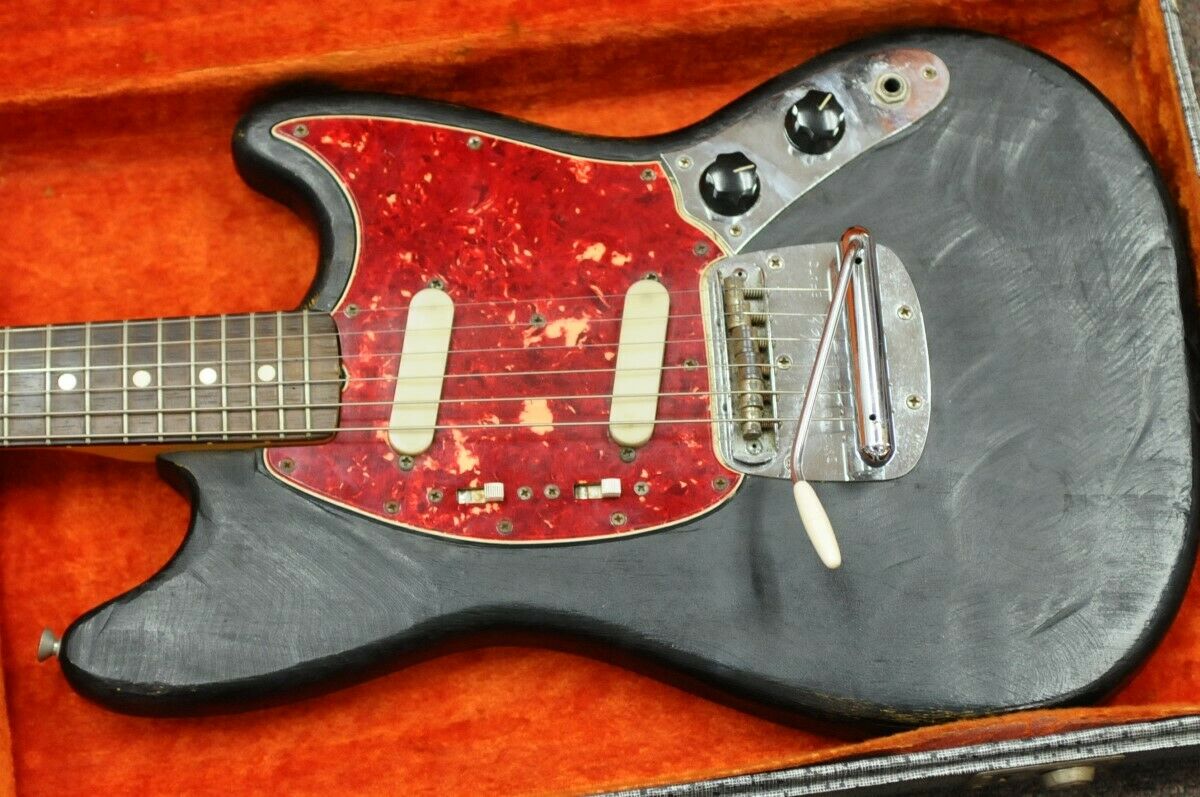 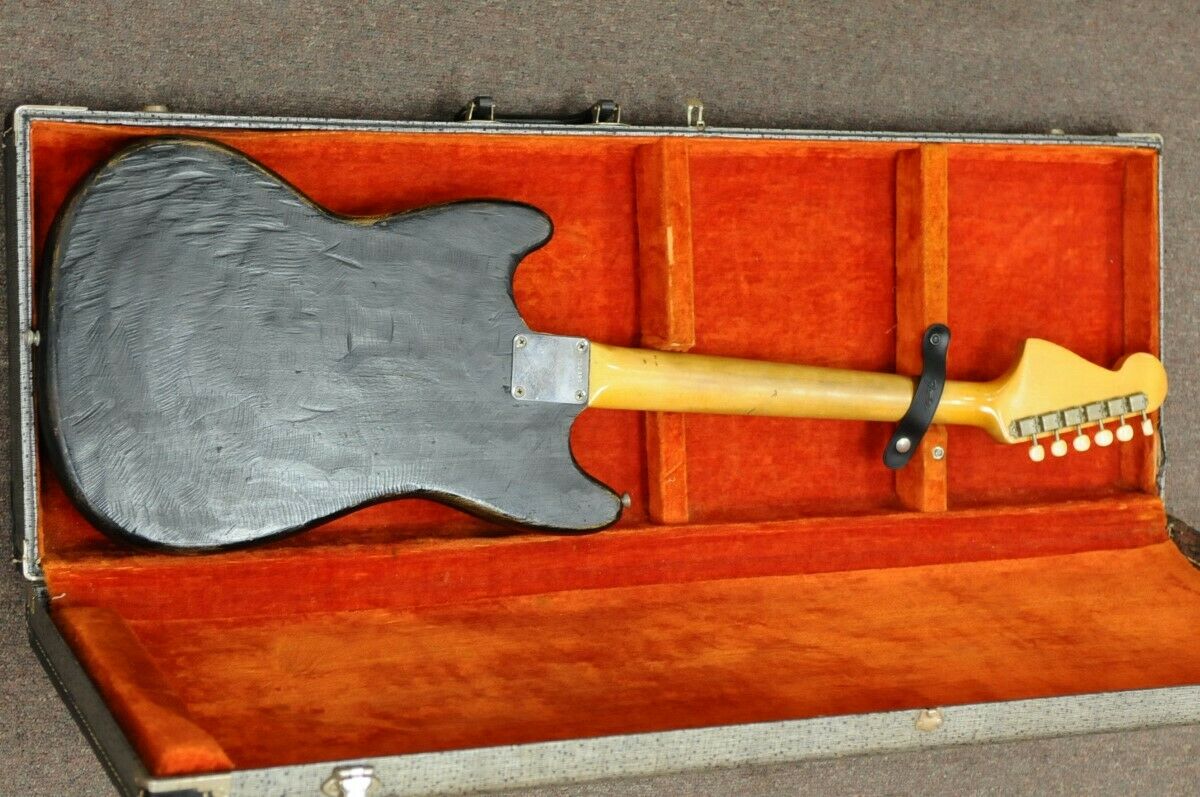 Luckily it's a non-contoured body, so through the thickness planer and a new top/back on it, and a round-over.
Top

"
Used: An item that has been previously used. The item may have some signs of cosmetic wear, but is fully operational and functions as intended. "

Luckily Mustang bodies are common and come up quite often on Ebay for not too much money, so this one can go in the wood chipper where it won't hurt anyone ever again

By no means the worst case I've seen but that price plus what looks like fresh neck sanding is atrocious https://reverb.com/item/36901415-vintag ... d-for-pafs

I love how they say "routed for PAFs!" like it's a good thing

Aside from the price, It's the hyping that's the pitiful thing. Most people looking at that will see a project and be doing the maths in their head like 'how much can i sell those humbuckers for to offset the Jazzmaster pickups and scratchplate I'm going to need', not going 'oh wow that's so cool' at this shit:

"You get Les Paul Standard tones!" (no)

"This is without question one of the most "vibey" vintage Fender guitars we've had in the shop in a LONG time" (yoo wot?)
Top


...so then I'm doing a bit of research and see a Magnatone on Reverb with the same wear to the body - exact same scratches and chips. ...but no mods. So it looks like all of the ham-fisted hacking happened in the last year or two?

I had a similar thing happen recently. Bought a SUPER rare (only seen one complete guitar in 10+ years of looking) loaded Fenton Weill body- one of the fibreglass semi acoustics they made, and there had been an attempt like, last year to turn it into a complete guitar via sticking a Vox neck on it that was the wrong scale. Holes to fit it drilled - of course- in the body rather than the neck. Screw broken off and left in there.

Then they junked the original wiring harness, drilled a big hole for a les paul style toggle switch, then put a bunch of wiring from like, some 70s Japanese copy in there which he wired as Vol/Tone/Tone rather than the Vol/Vol/Tone of the original. This was celebrated by melting off the moulded 'Volume' wording on the original knob, with a soldering iron.

Then - doubting the structural integrity of a fibreglass body, they bunged a load of wood - no shit, that looks like it came from a bag of firewood that you'd buy at a petrol station and superglued it in.

I've slowly been undoing it all and making a new neck, but it's truly incredible what still happens to these things. All I can think is that they go 'oh well it's not an old fender so it doesn't matter' or something
Top

Astrojet (believe it or not) 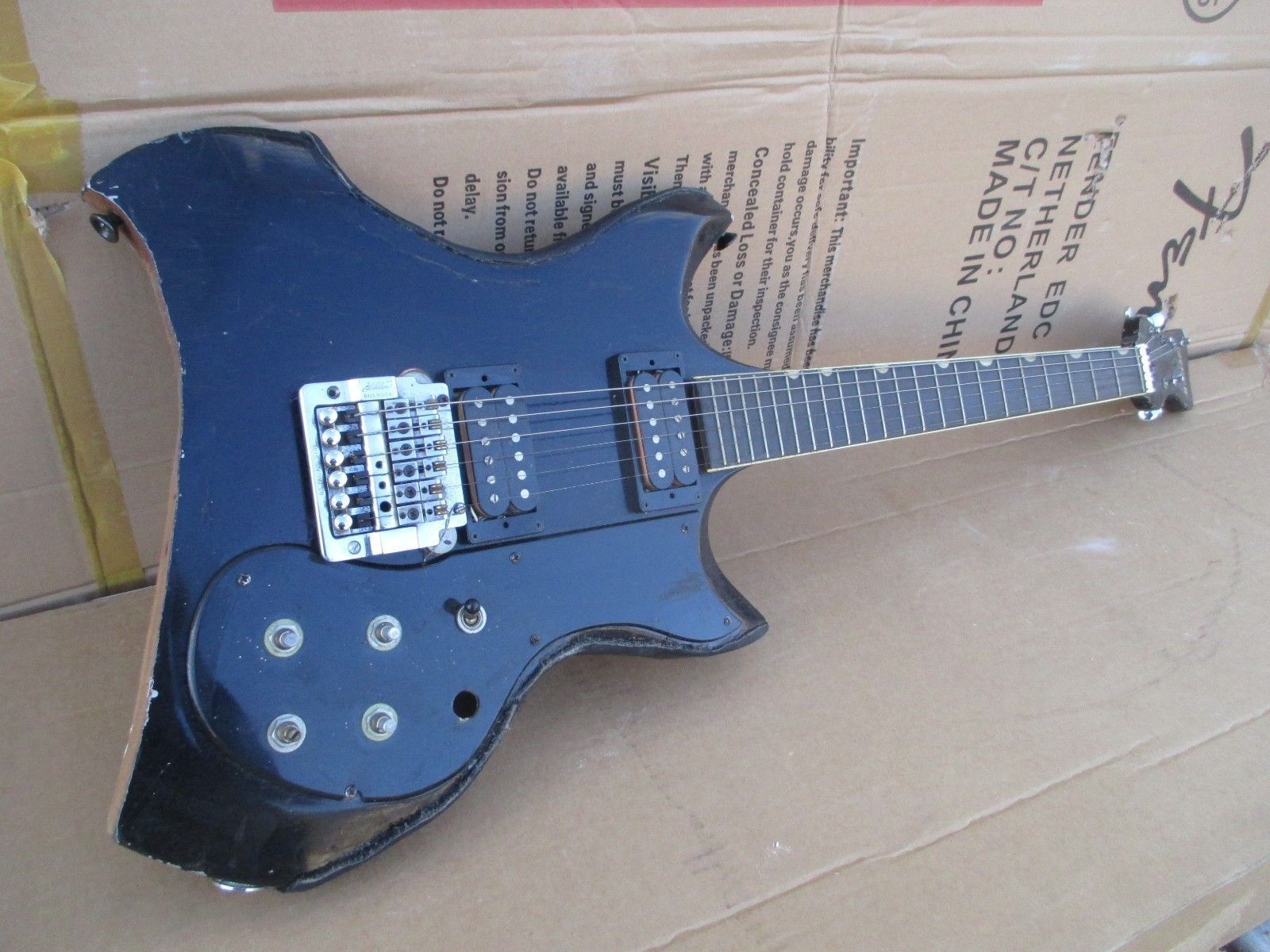 I don't think that's the first time this has appeared in this thread, but it never gets old really... that guy is *THE* worst seller

I wouldn't pay a hundred quid for that firewood
Top

"
Used: An item that has been previously used. The item may have some signs of cosmetic wear, but is fully operational and functions as intended. "

I think most of that should buff out OK.
You think you can't, you wish you could, I know you can, I wish you would. Slip inside this house as you pass by.
Top

I have a soft spot for vintage Selmer Futurama guitars - one of the first mass produced solidbody electrics in europe (production started in 1955 in Blatna, Czechoslovakia) and very advanced design for its time. They aren't very usable in real life, since the wood stability, build quality and electronics aren't very good, but they are certainly beautiful to look at. Today, these guitars fetch premium prices in stock condition on Czech used guitar market (you can get 2300 euros for an early one in good nick for sure, 1200 for abused one). I've always lusted after one of these purely for their looks, preferably a husk or modified one I could swap pickups on and have refretted properly (vintage czechoslovak fret jobs are nothing to write home about and one can often find guitars with wrong fret aligment from 12th fret onwards - completely unusable).

Yesterday was my lucky day. While browsing the classifieds, I found a guy selling Futurama III (the last version of cz made Futurama from about '61 to '63, utilizing 6 in line headstock design which Ibanez borrowed for their Roadstar designs 20 years later)...WHICH WAS CONVERTED INTO A WALL MOUNTED COAT HANGER...for 300 cz crowns (about 12 euros) - these go normally for about 1k euro unmolested. I simply couldn't resist, despite the fuel cost of driving there was actually higher than the thing itself. Right now I am researching what to do with it. The basswood body was plained down a lot, but nothing what layer of fresh basswood wouldn't fix according to my luthier. Neck is another story. Dude managed to drill through the truss rod on couple of places

the fretboard is made out of pear-tree wood, which is not very good choice of material to start with (pretty soft, you can scratch it with a fingernail) and my luthier insists on making a new neck for it, since he can't guarantee stability of the neck even with a new trussrod and all holes fixed. I'm still talking him down to try and fix the original neck, since I would love to save most of the guitar (for the sake of fun and stories) and have the "scars" visible to tell the story. Another issue is with hardware available for it - the neck is 40mm at the nut and 50 mm at the heel, with pretty narrow space for a bridge. I don't mind routing since there will be another layer of new wood sandwitched on the original piece, but the original spacing calls for pretty narrow bridge spacing, 50 mm tops (Hofner 173-176 bridge with its E to e spacing of 47mm would probably fit) - any tips for replacement bridge and tailpiece or whole tremolo system would be appreciated.

My vision with it is to have it finished in silver sparkle with matching headstock, three Jag pickups with 5way ala Johnny Marr on pearloid pickguard in the original shape, but I am currently not sure about the tremolo system. Original is basically unobtainable (there is one guy making replicas and he's charging 1200 euros for single unit) and not very functional in the first place (despite it's proto floyd rose looks), some floyd rose or kahler would look cool on it, but there probably isn't any floyd style bridge with this narrow string spacing on the market. Any bridge recommendation for this abomination will be surely appreciated