I just got this brand new Squier Classic Vibe Jazzmaster today. I was curious how these differed from the Vintage Modified Jazzmasters we all know.

I should say that I love low priced guitars, and the VM series was my favorite cheap guitar. But, I can also appreciate a good high end guitar, and I spend a lot of time working in a small boutique builder shop making some pretty cool custom stuff.

I've had well over 2 dozen of the Vintage Modified Jazzmasters and Jaguars, and for a while had a little cottage industry buying seconds/refurbishing and reselling. I got to know those guitars really well. From poor wiring to paint blems, and everything in between. I've fixed them, modded them and enjoyed them.

This guitar is brand new. It's the first brand new Squier I've ever bought. Which is weird. But I still got a deal on it.

First, some pics. These are fresh out of the box. 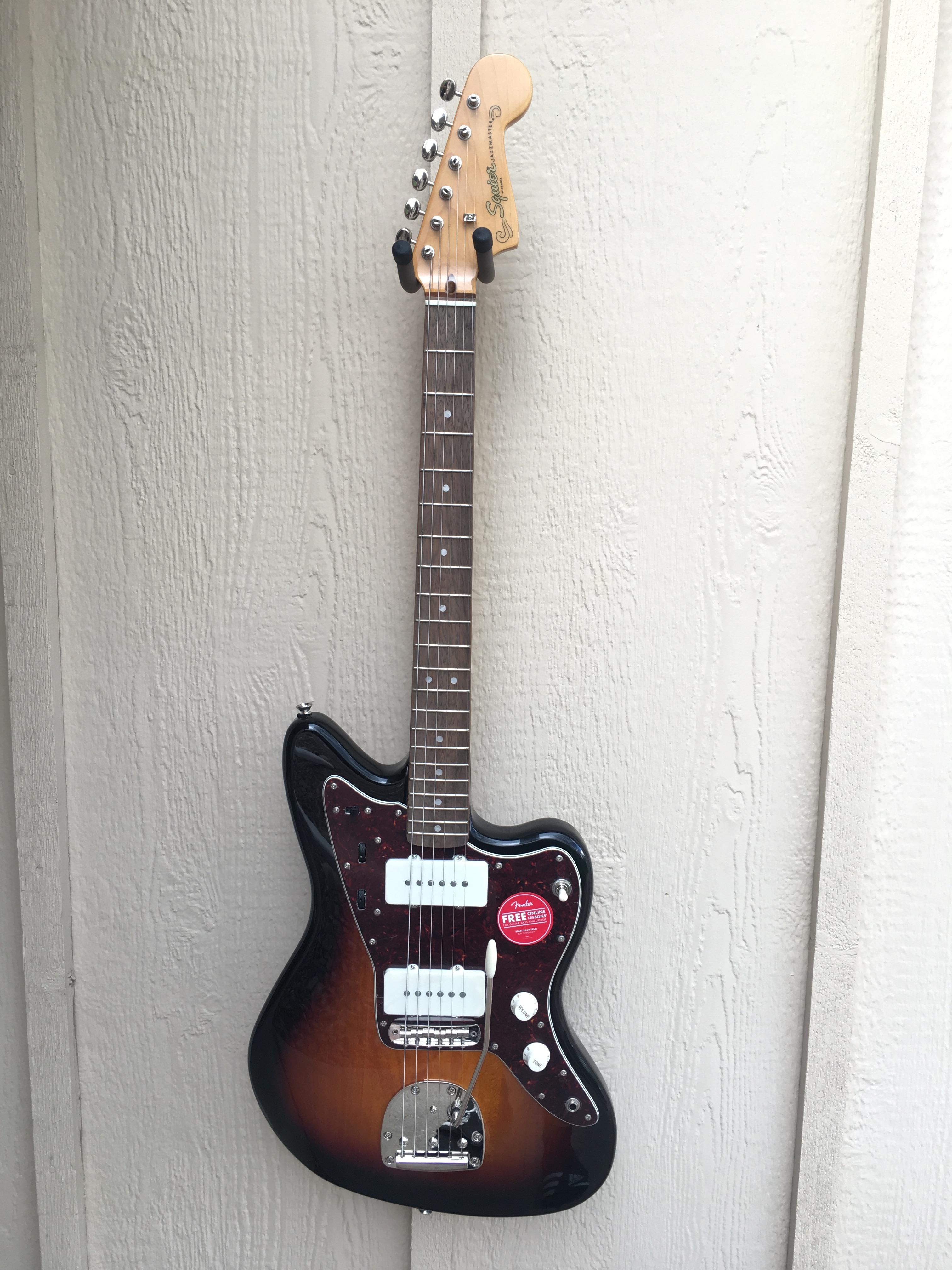 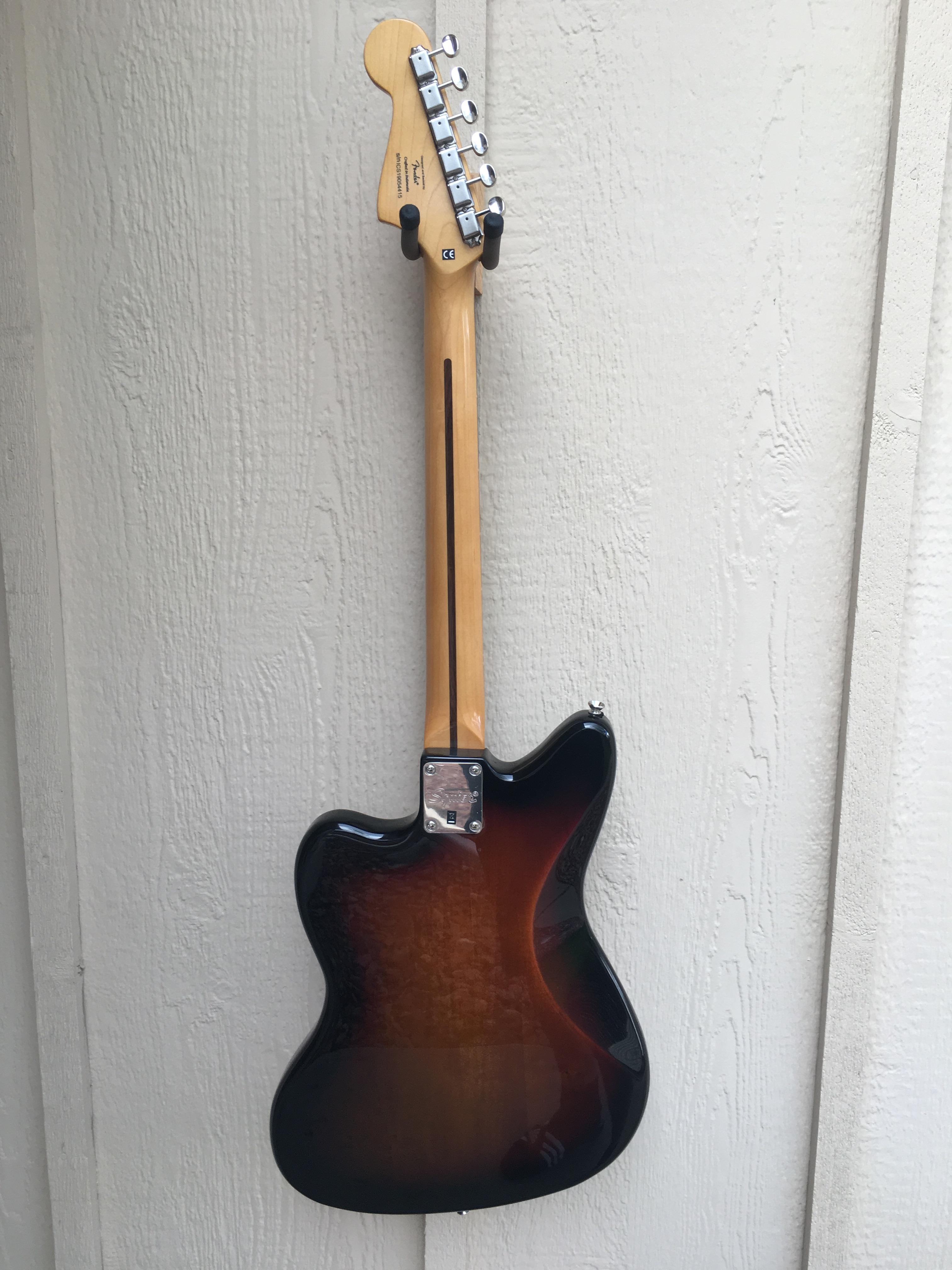 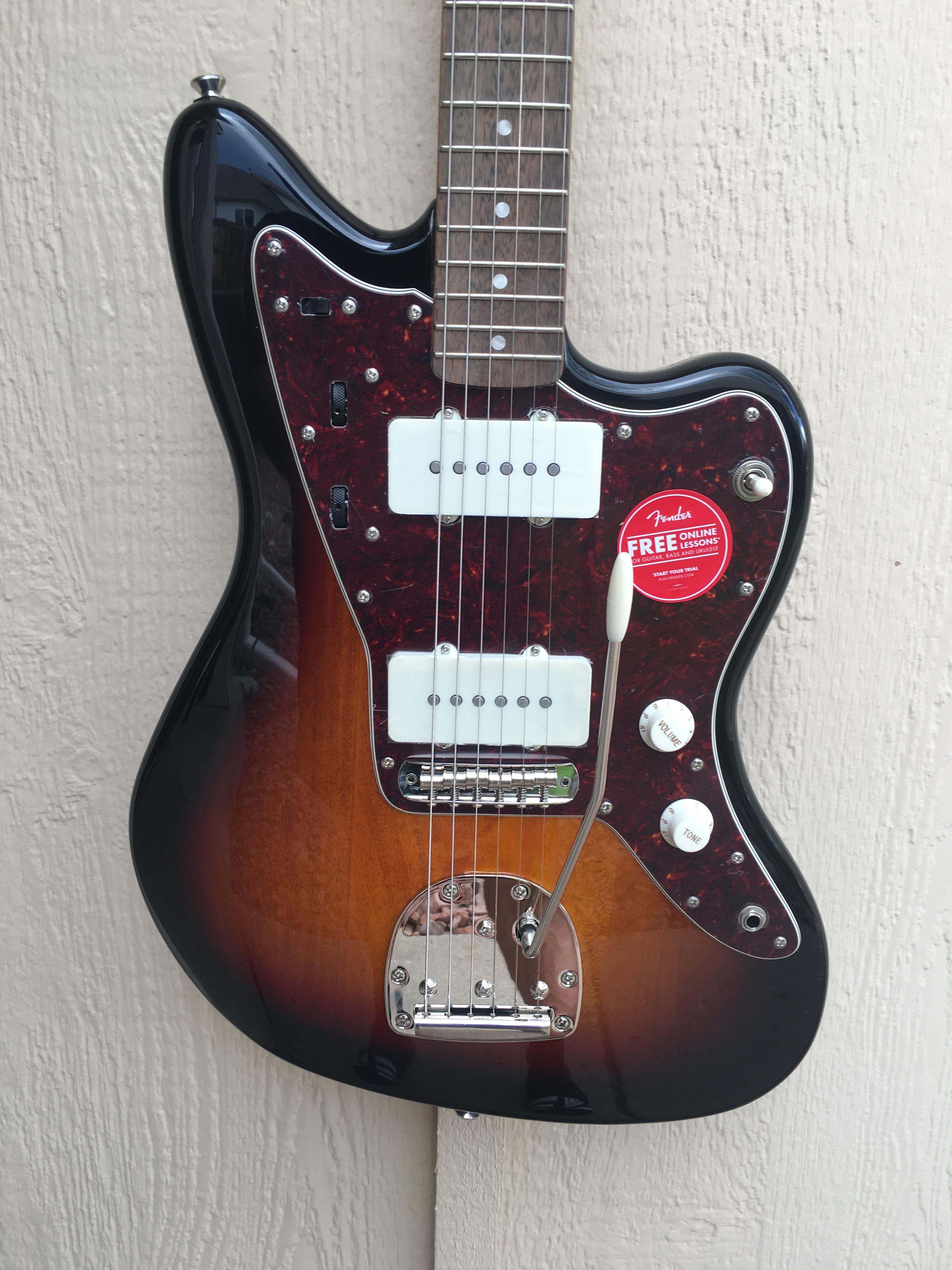 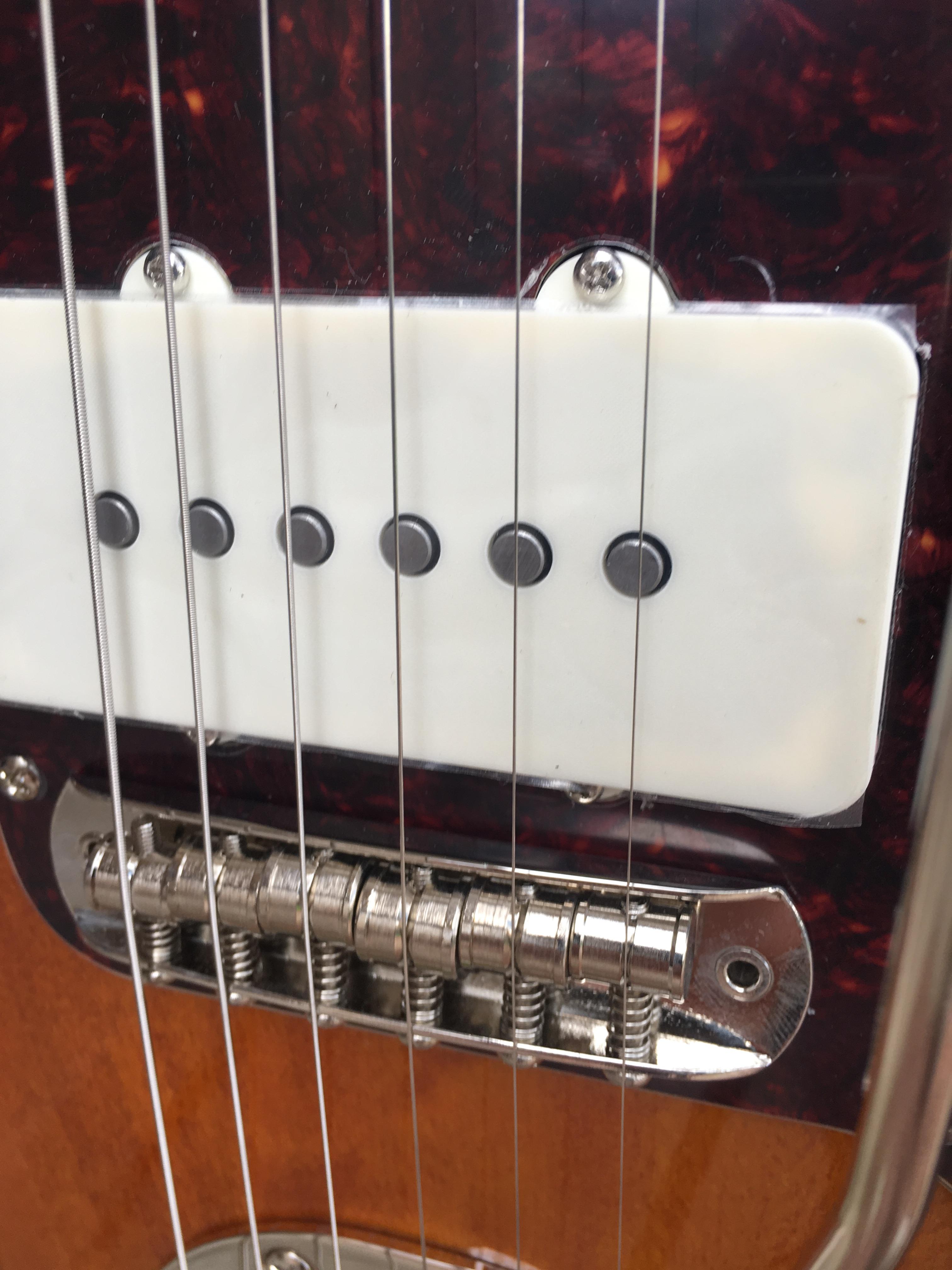 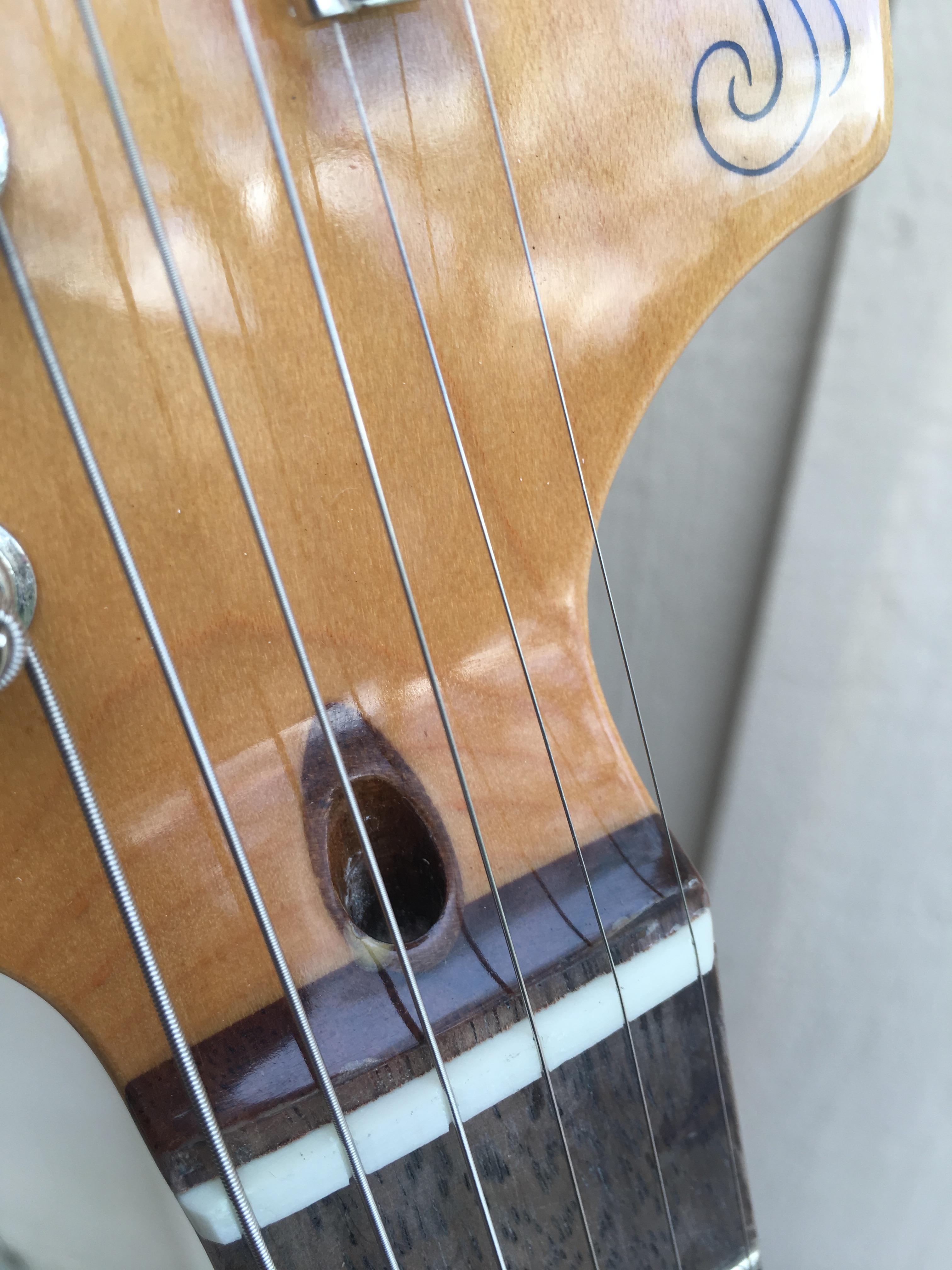 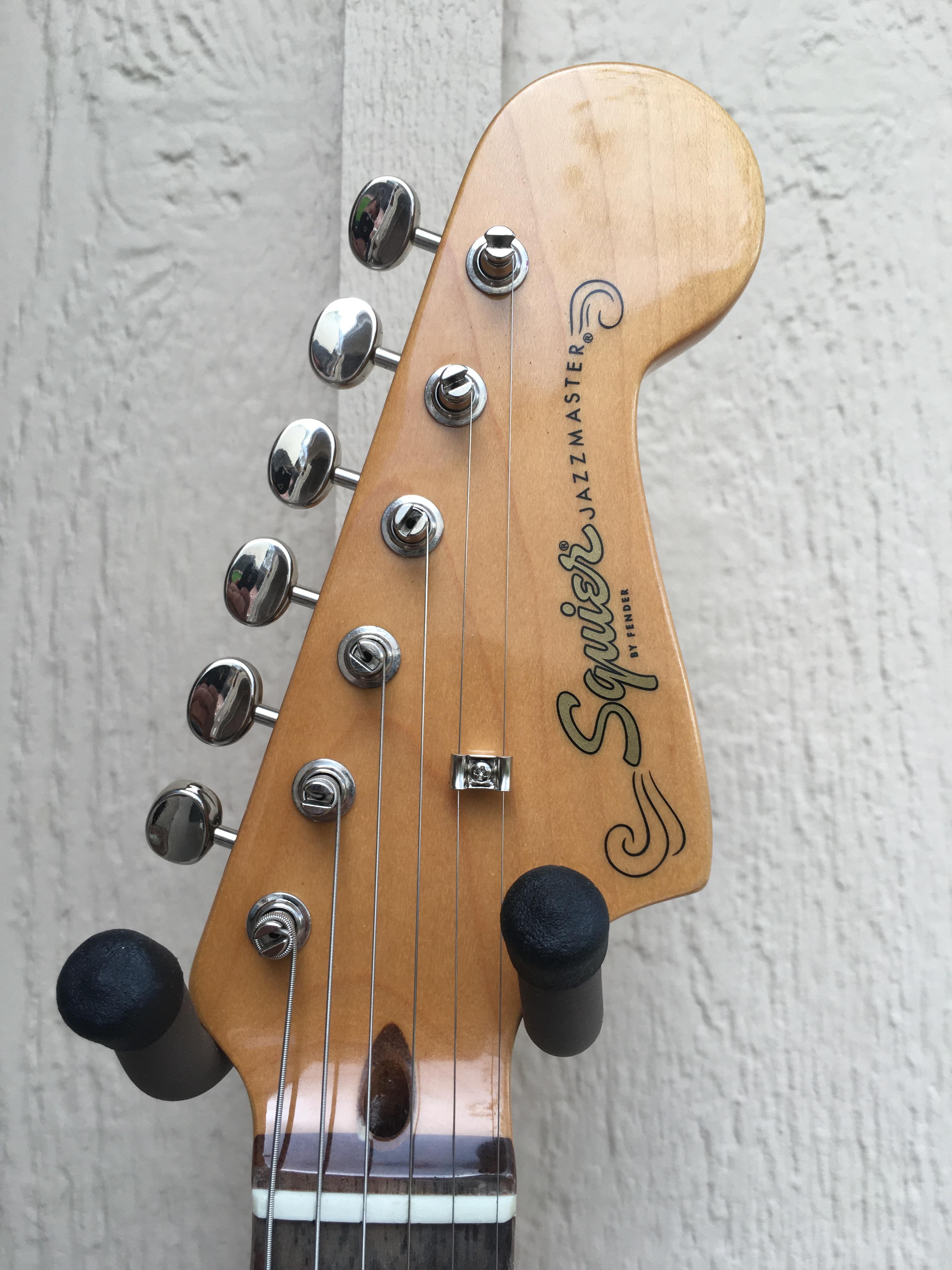 Cosmetically, everything was fine. no big blems, and fit/finish seem good.

Let's start with the good.

Cons:
1. The high E string was cut poorly, and had a "sitar" buzz. easy enough fix with a nut file, but...... most people don't have a nut file. It was virtually unplayable until the nut was fixed. All the other slots might be oversized?
2. I haven't seen a sunburst this poor since.....The Vintage Modified series. it's the exact same sunburst. virtually no red. and
3. This is basswood. Fender states Poplar. I don't really care, but this guitar isn't made of the wood it's claimed to be. I was hoping to see a Fender Poplar body, which is why I bought the sunburst.
4. Booger on the truss rod hole. no big deal, but it's there.
5. Fingerboard is UGLY! I'm not a big fingerboard snob. Dark or light, I don't much care, but this one is kind of grey. We'll see what some oil does, but I'm not thinking it's going to be too much improved. The pics make it look better than it does. UGLY!
6. Tuners don't seem to be as nice as the VM series. I know some have issues, but I never had any cause to swap them.

So, I pulled it apart, looked it over, measured some things, and I can virtually guarantee these are made in the same factory as the VM's, using almost all the same parts. Basswood body, same marginal sunburst. Even the pickups are the same. While playing it I immediately thought "these are the same pickups.

1. The pickups have to be the same a s the "Duncan Designed" versions. Same construction, and same output. 11.71 bridge, 6.77 neck. Same glued on covers. I'm kind of disappointed that they aren't something new. "Fender Designed" my butt.
2. that's a lot of wire!!
3. The finish is still really thick. 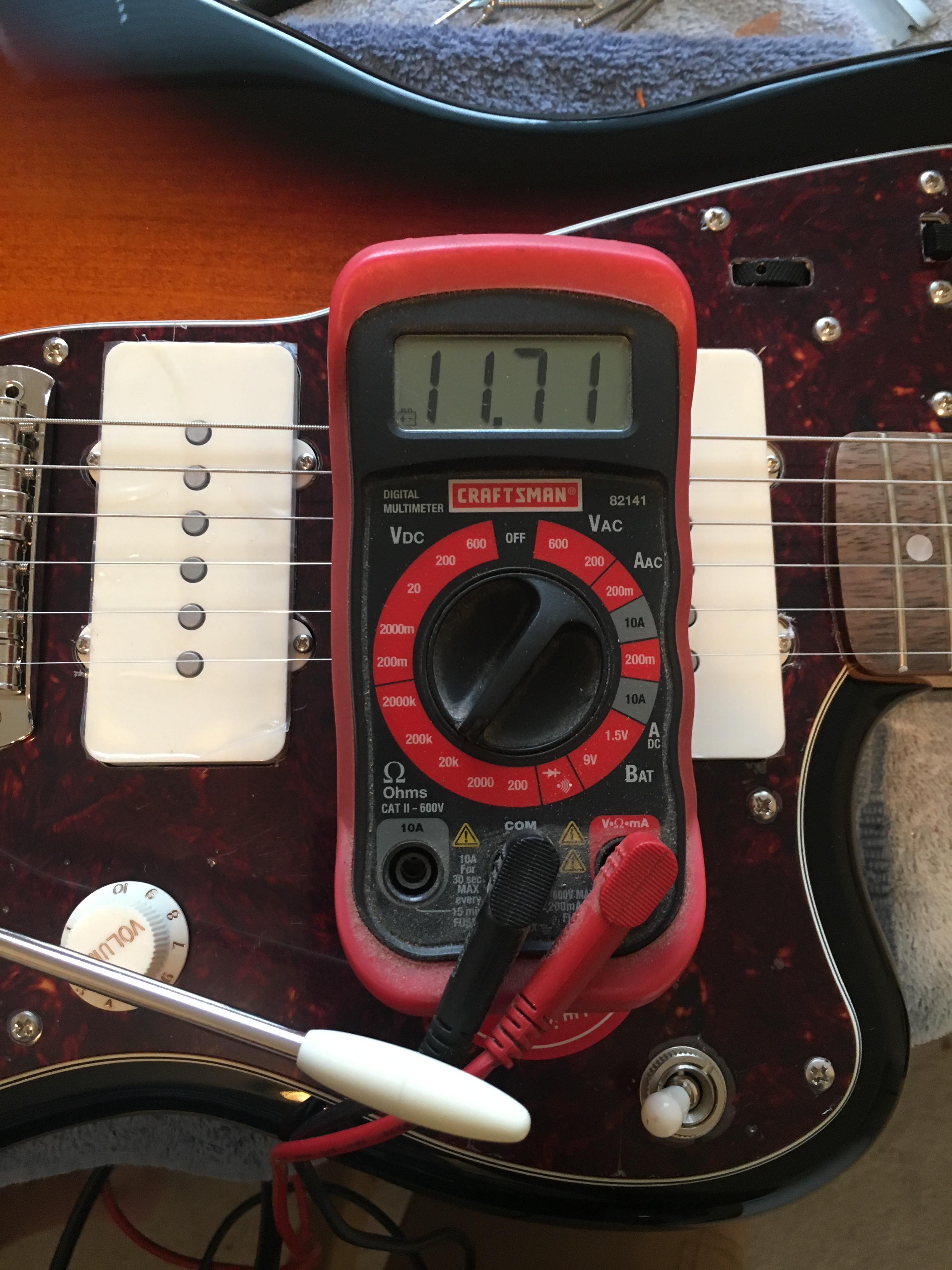 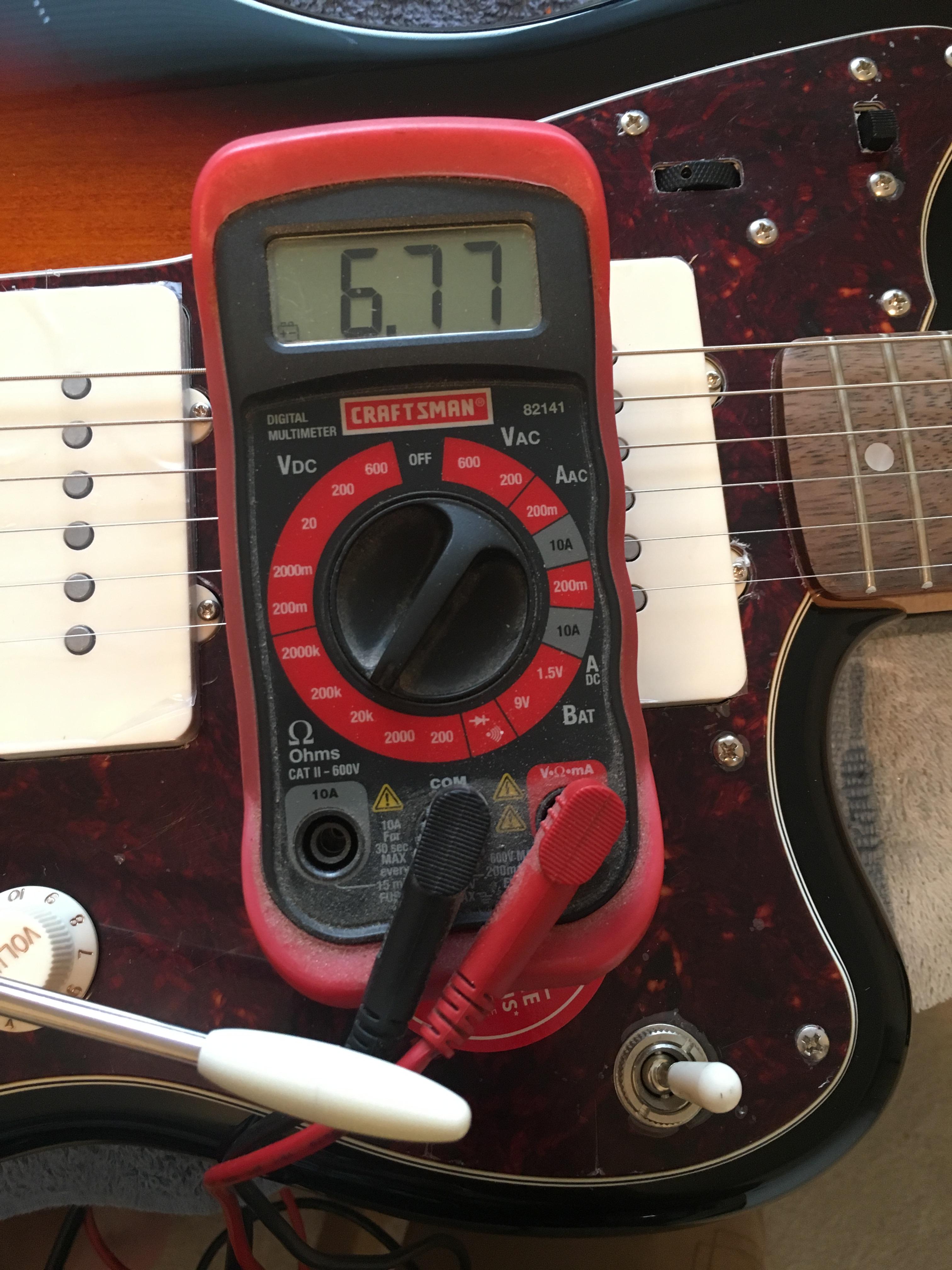 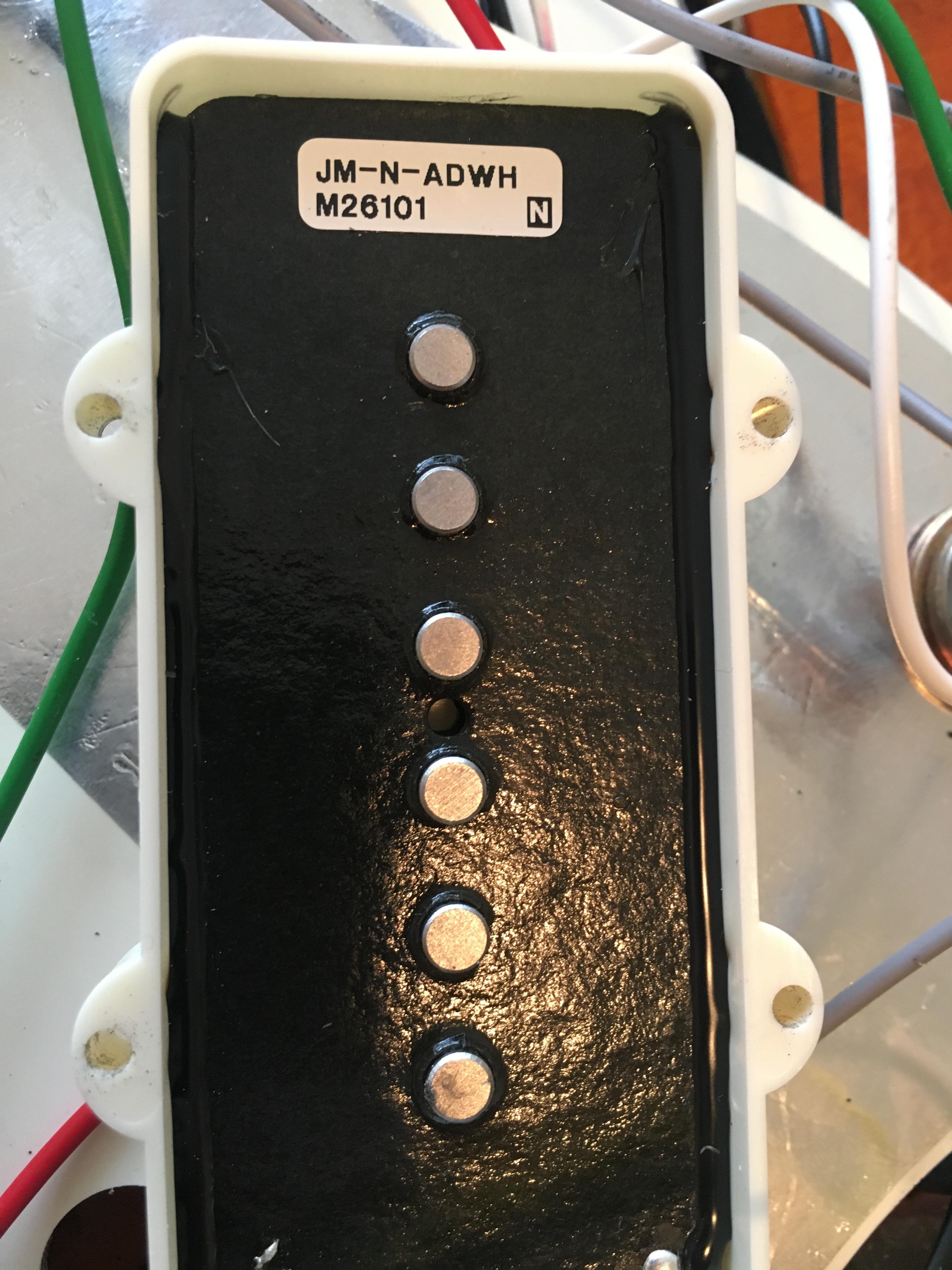 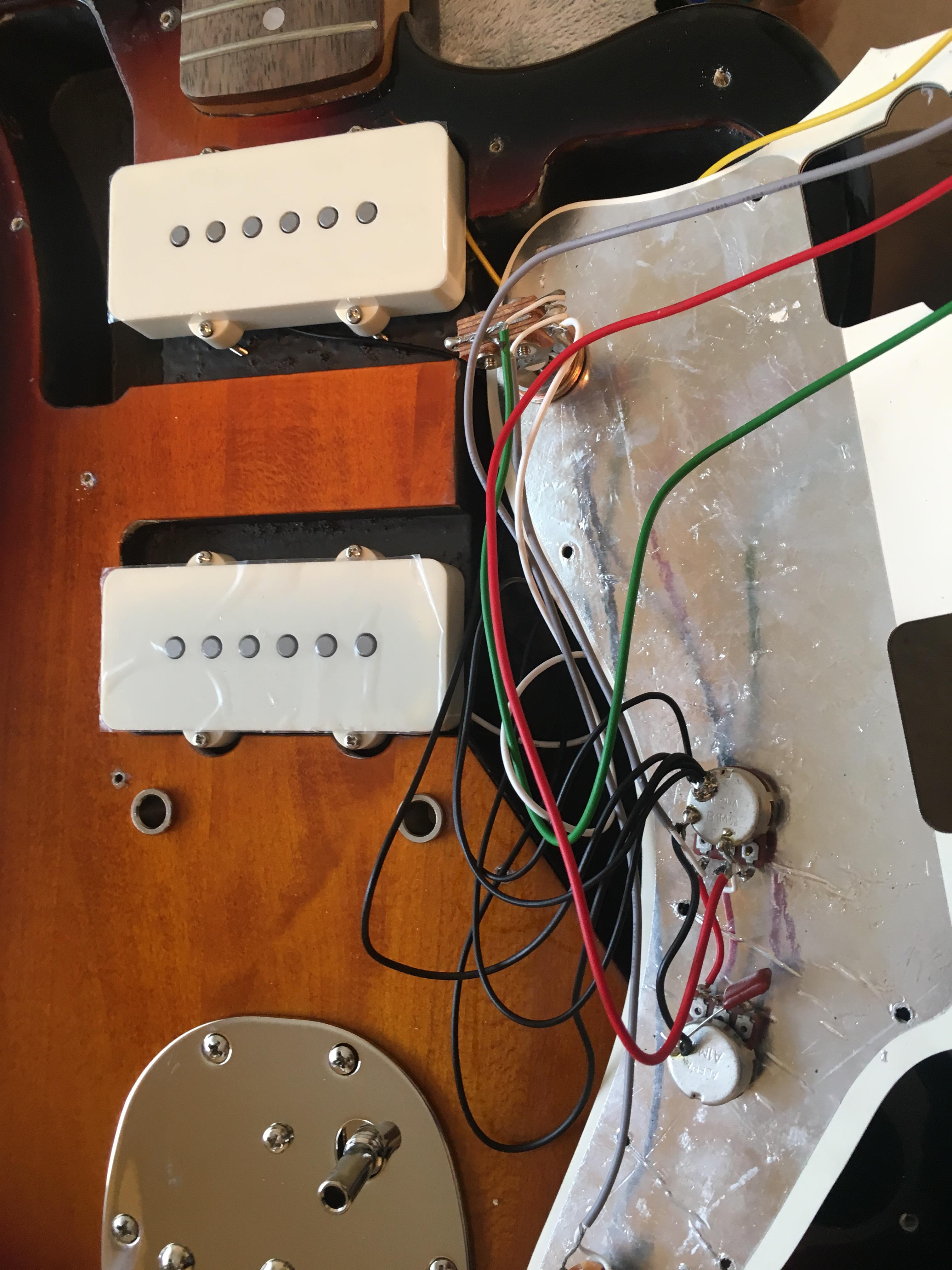 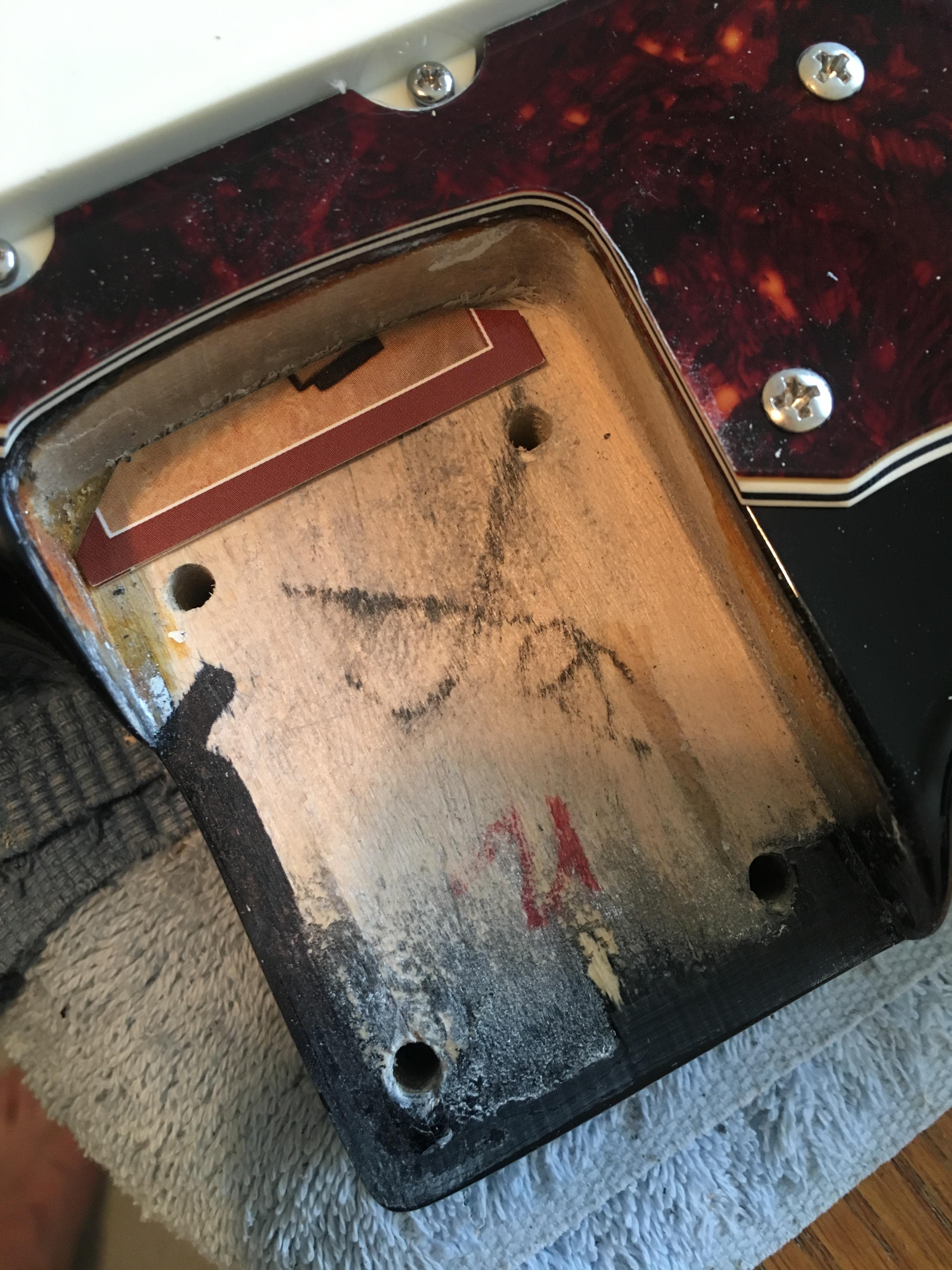 So, with all this doom and gloom, what's the final verdict? I guess I like it? I was kind of hoping for something much different that the VM Jazzmasters of the past. This is basically the same guitar with a new (better) bridge, bone nut, and new decal, and really poor looking fretboard.

I'm going to do a basic set up on it. (shim the neck, heavier strings, etc) and play it for a while. I'm going to resists doing a bunch of upgrades right away.
I'll follow up as things progress.

I think overall, these are an upgrade from the VM series just for the bridge alone.

Still, for $399 (or less if you are a cheapskate like me) these are a really good modders platform, or even a good way to dip your toe in the JM pond. I'm going to hope the e string nut issue was an accident, and not the norm.
Top

Is everything still AVRI-spec? Also, are they using real tort now?
Top

If the nuts seem oversized, maybe it plays well with 10s? Wishful thinking on my part...
Top

Nice.
The tort pickguard is a huge improvement.

I'm not surprised by all the cons you listed.
Top

What makes you say that the guitar is basswood vs. poplar? How did you determine this?
Top

I wonder if they're just using up existing bodies that they had already produced for the VM series. After all, sunburst, white, and sonic blue are all finishes that were available for the VM. Maybe the poplar ones will just start suddenly appearing once they run out of old stock. I wouldn't hold out hope, but who knows.

Seems like from the reviews so far that they still are not up to par with anything from the China factory. Sad to hear that they're watering down the Classic Vibe name.
Top

I assume he meant things like the pickguard, plates, neck heel width, etc lining up.
Top

From first Review doesn't appear they're like the Examples I saw at Winter NAMM which were pretty much flawless.... Guess those must've been Cherry picked & got the Pro Set up treatment...

Thanks for the review - I've been waiting for one of these to pop up. I was expecting the classic vibe to be a step up from the VMs (not that they're bad) and have been mulling the idea of purchasing one, despite hating the laurel fretboards, to use as a beater/mod platform JM. Alas, back to the drawing board. I have a bunch of spare necks etc - might just get a body and assemble one to serve that purpose at this point.

If the CV jm blew your socks off, it would make financial sense to get one and gut the electronics, but if they're just like the vm's, it makes less sense. Seems like the classic vibe moniker is just a marketing tool to sell more of the same.

If other folks on here have purchased one, consider also doing a review!
Top

I have a tempered impression of the VM Jazzmasters (given I own one myself I suppose,) I really think they could be improved in a lot of ways but:

-Really glad to hear about the bone nut, the VM nut basically feels like it's made of putty. Too bad about the setup.
-My stock VM bridge actually does not rattle (still not as solid as a US/vintage bridge but better than both MIJ bridges I own in that respect.) Still it's the only Jazzmaster bridge I've experienced where the post screws lower by themselves. I never replace Jazzmaster bridges with Mustang if left to my own devices, but I guess it's not something that matters a huge deal anyway.
-I haven't picked up a VM vibrato that wasn't a clicking, unstable mess ever. Glad the vibrato on this one actually works.
-I like the walnut plug. Looks much less cheap
-I still like 9s on Jazzmasters

Overall seems like they could have replaced the VM with the CV if they weren't going to make it any more different than all that.
King Buzzo: I love when people come up to me and say “Your guitar sound was better on Stoner Witch, when you used a Les Paul. “...I used a Fender Mustang reissue on that, dumbass!
Top

Yes, this is what I meant. Kind of crucial for a modding platform.
Top

I guess it's just my somewhat educated opinion. We use a lot of poplar at the guitar shop I work at, and some basswood. I could be wrong, but if this Classic Vibe JM is poplar, it's not the same poplar we get. And, it looks just like the Vintage Modified bodies that were basswood. Poplar usually has dark streaks in it, and this guitar is clear. 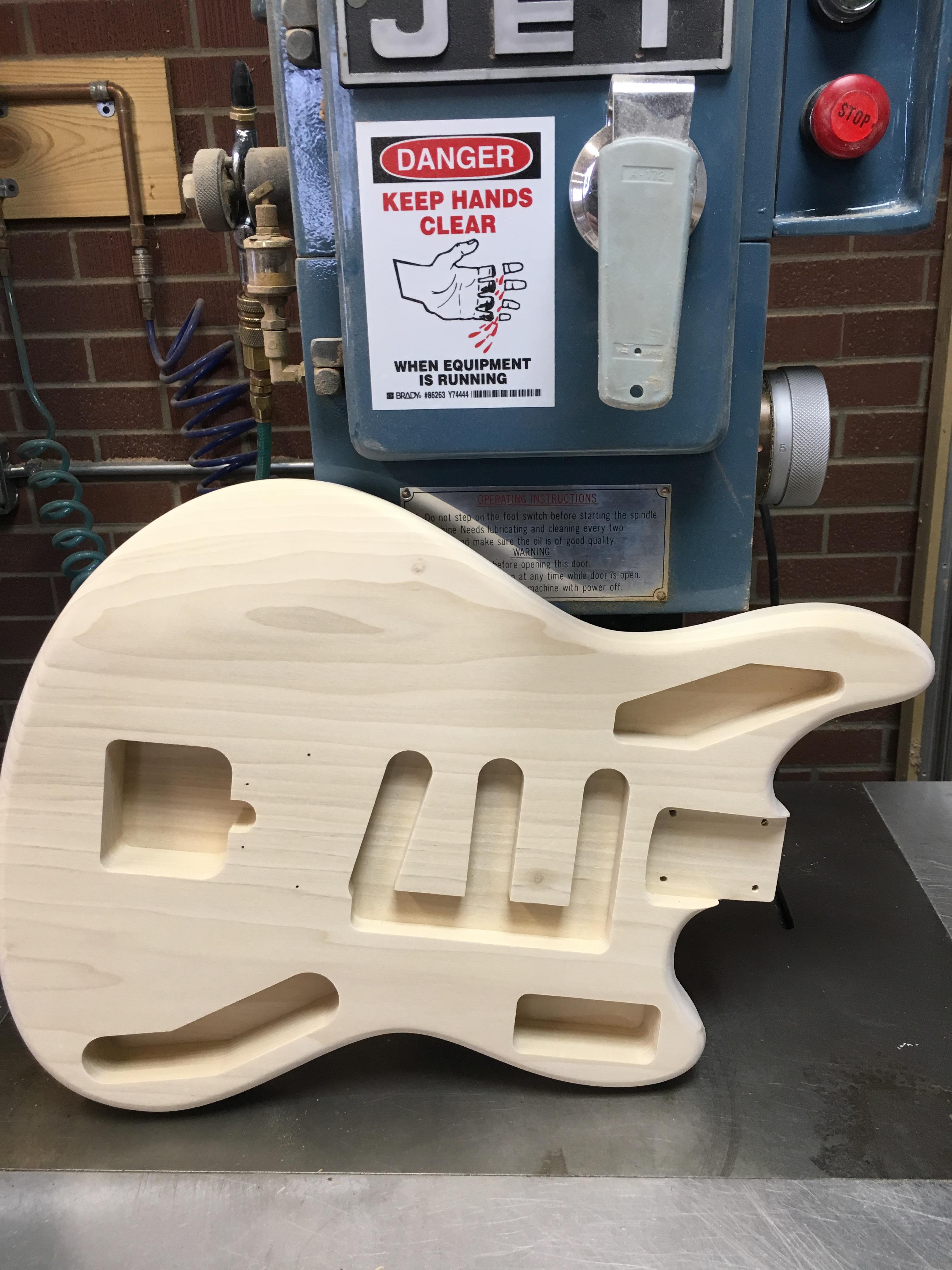 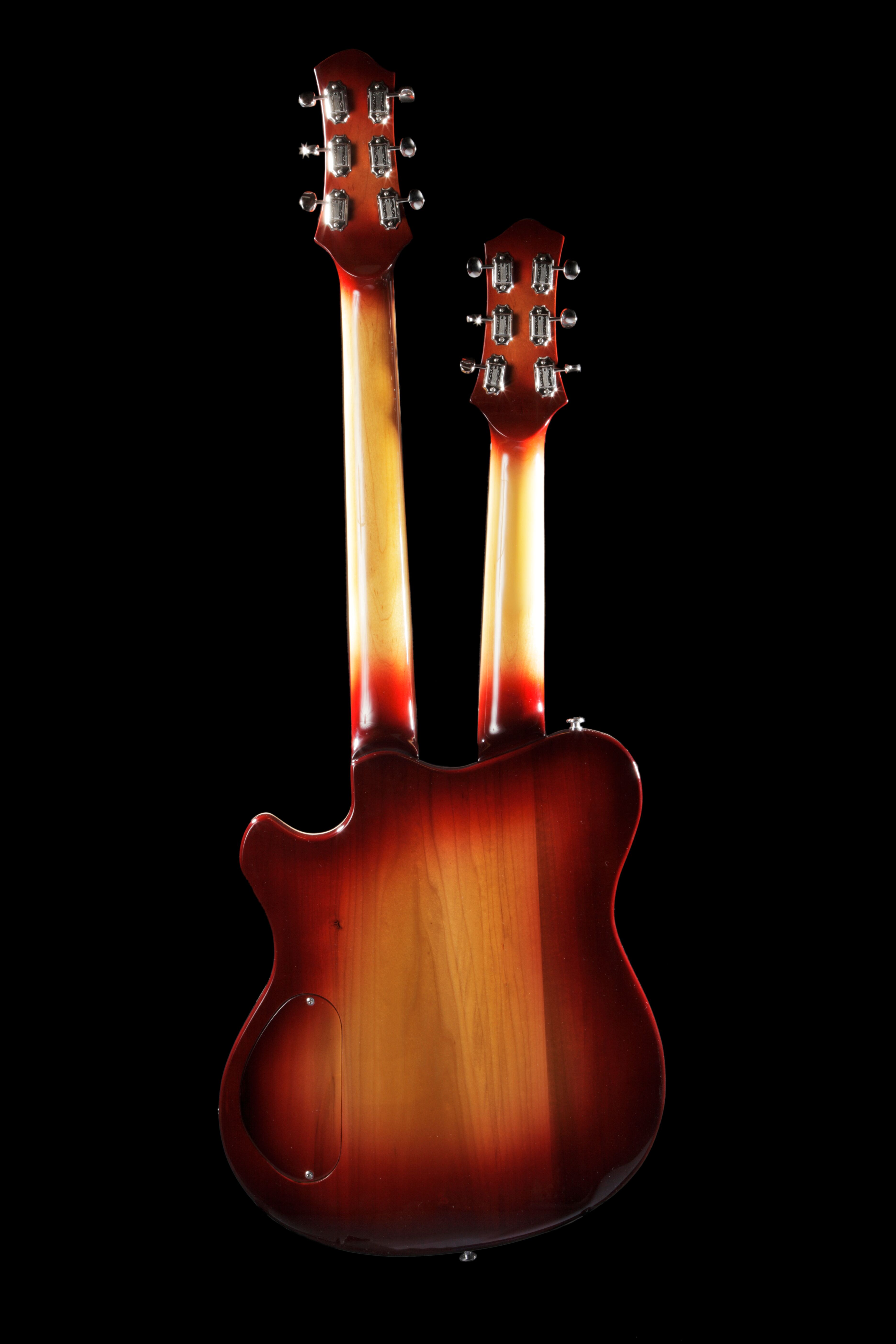 Yes, this is what I meant. Kind of crucial for a modding platform.