For help with setups and other technical issues.
Post Reply
6 posts • Page 1 of 1

In these troubled times I once again seek your advice.

A few days ago I've traded the weird Hsin-Mi (the one with the shape of the Teisco Spectrum 5) - to a pickup maker - so that he would wind me a custom set for my Thinline Jaguar in exchange for it.
It's still my main guitar (but recently got a little competition) and currently it sports two SD P-Rails - of which I only really use the P90s and while I'm not unsatisfied with them at all- I'm sure that there are better sounding Humbucker sized P90s out there. The Rails are lame and the Humbuckers a tad too muddy for me (yes even with 1Megs) and parallel - series - P90s wiring is somehow not so easy to do with/on the single 3 way mini toggle I have in there.

I'm also still awaiting a Tele-custom set for my Telemaster from him - so I can't yet tell you anything about his pickups in general and whether WRHB are a thing for me or not. They're not CuNiFe obviously - but Alnico 5 - and I ordered them to be split-able.

So:
What are the main differences between (PAF-sized) WRHB, hum-cancelling double coil P94, and Z-coils?
Somehow these diagonal 3/3 coiled pickups really appeal to me.
I really want to keep up these sexy 70s aesthetics - while PAF sized WRHBs with closed covers might look even better - I really dig open frame pickup covers...that's kinda seems to be my thing for sure! 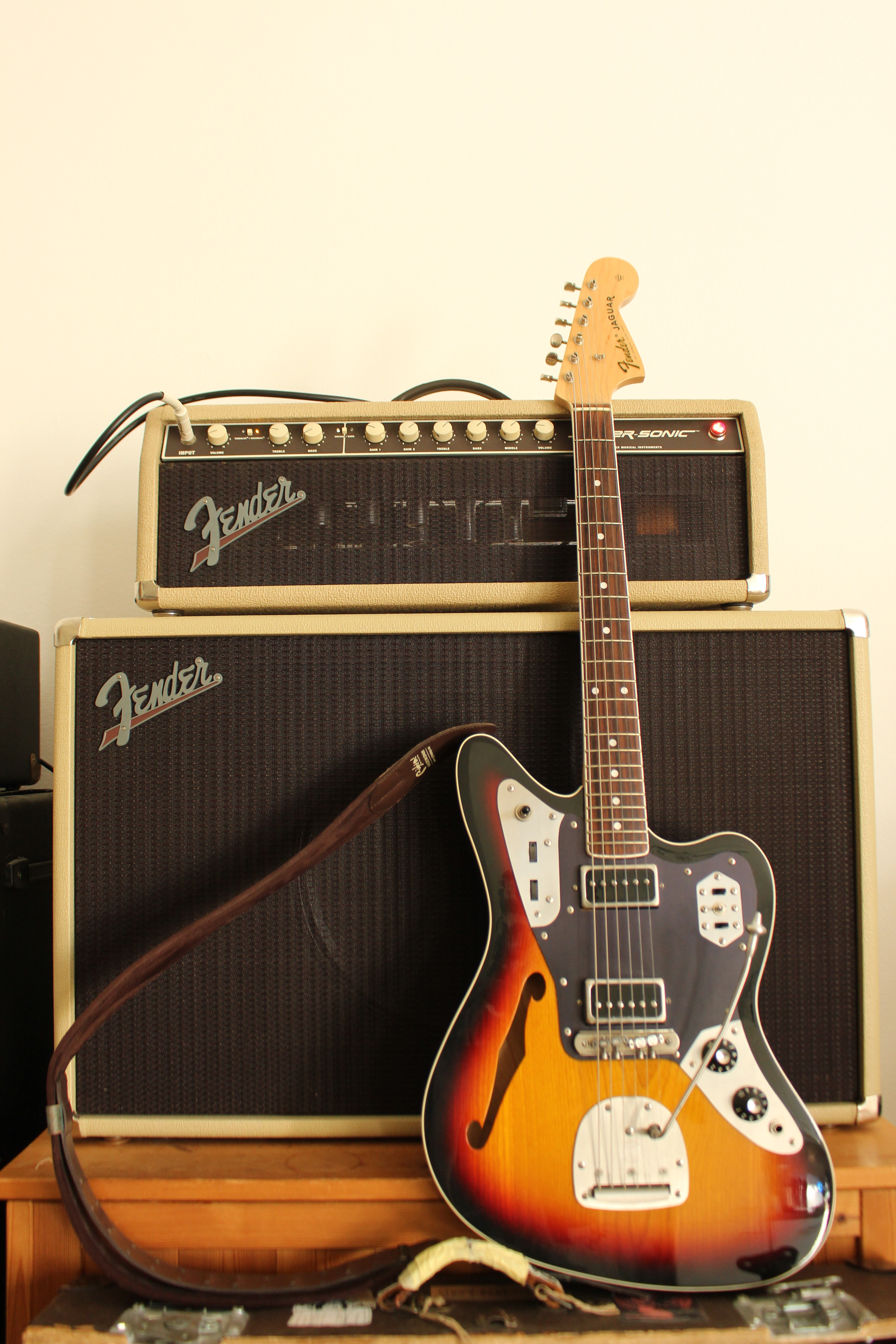 I know next to nothing about Z-coils - I like the look of them - but in this case... packed into a PAF housing I don't know what benefit these might have?

How do P94s in the same 3/3 alignment as WRHBs behave? what change of sound can I expect compared to a regular P90?
I already have (and love) the Surf 90s in my other Jaguar - so something like the Surf 180 could be cool for me too (but if I'd buy a set "just for comparison" I'll soon end up buying another guitar just because I had those cool GFS pickups floating around) - P90 seem to work fine for me. Traditional (PAF) humbuckers not so much. But I'm really curious about WRHBs as they would theoretically be an allrounder - but how do they sound split? I know they love Fuzz - but how do they assert themselves in Surf territory?

With TENTACULA we make some weird Psych-Garage-Heavy-Surf-Doom. And at home I'm currently even more so into surf but also starting to slip a little into shoegazing/noise - so which way to go?
Top

It has been my quest for the last few years to explore these categories of pickups. I love single coil tone and hate single coil noise. Each basic design you listed (stacked HB, Z coil, WRHB) is something I've explored, along with a few others.

Firstly, WRHBs were not for me. They're relatively hot as far as vintage humbuckers go, so despite the alnico magnets, they don't sound single coil-ish to me at all, which is fine, but not to my taste.

There are two factors that make a typical humbucker sound different from a single coil. The first is that the HB is sensing the string at two different points along its length, so when you combine the signals from the two coils (in series or parallel), you get some phase cancellation at certain frequencies. The second factor is that the pickup has two coils worth of wire in the signal path, and when they're placed in series, you get a higher inductance and a lower resonant frequency. In other words, you gain midrange and lose high end. WRHBs suffer from both of those issues, and the end result is not single-coil like at all (though it's a perfectly nice humbucker tone).

I've owned a number of stacked HBs, including Fender's JZHBs from the American Special Jazzmaster. The thing about stacked HBs is that they sound a lot like regular HBs. Unlike a side by side humbucker, they sense the string at a single point (solving one of the two issues), but they still have an extra coil's worth of wire in there that lowers their resonant peak. Also, unless you shield the lower coil magnetically, it's really hard to keep it from acting as an inductor by interacting with the pickup's magnet, so instead of being a pure dummy coil, it does generate some sonic information that further colours the tone of the upper coil. This moves the inductance up and resonant peak down, once again behaving in a more humbucker-like manner. Some builders like Kinman or Wilde (Bill Lawrence) have engineered designs that shield the lower coil magnetically and/or use minimal amounts of wire, minimizing its tonal impact, but basic designs like the P94 don't, and they do sound quite humbucker-like.

That brings us to Z-coils, which are one of my favourite type of pickup. There are a few different designs that appear like Z coils but are built a bit differently. A G&L Z-coil or (custom, RW/RP) Electric XII pickup has two separate 3-string bobbins, each with 3 polepieces placed at different locations along the string. There are also pickups like the Fralin Twangmaster or Fralin P-92 which are HB-shaped but only have polepieces on one string or the other. They look like Z-coils but they have coil wire along the full length of each bobbin.

There are then two close cousins of the two above approaches. There are split-coils like the Fralin split-blades or Novak Tele-HC which place two half-coils right next to each other, basically like a Z-coil with polepieces lined up together. And you can also remove the screw polepieces from any side-by-side humbucker, which inactivates the magnetic circuit of that coil and functionally turns it into a single coil with a dummy coil.

The Z-coil/split coil approach is my favorite. By having only a single polepiece sensing each string, they truly sound like single coils, and they don't have any extra wire acting as a dummy coil. They don't sound identical to any given single coil pickup, but they possess the positive qualities of single coils, absolutely. My second favourite approach is the one involving a single set of polepieces in a dual coil design. That adds some extra "dummy coil" length of wire, which shaves off a bit of high end, but the pickup can still be designed and wound to sound like a real single coil. I have several sets of pickups that fall into the Z-coil/3+3/single row of polepieces category and I enjoy them all, more than I've enjoyed most stacked designs.

Another category of pickup that doesn't sound like a true single coil but can do the job of one is the firebird. They use Alnico bar polepieces, so they're similar in concept to a WRHB, but the coils are narrower and wound lighter (vintage firebirds are under 7k vs WRHBs at 10k, both with 42 AWG wire), so they're sending a narrow window of the string and have a higher resonant frequency than WRHBs. They definitely sound much more "Fendery" as a result, and are worth considering any time WRHBs enter the conversation.
Top

I'd look into the Kinman Twang-Bucker or his P90 Bucker. I have his "FatMaster" noiseless Jazzmaster pickups and they are fantastic.

Another thing for you to try is simply wiring your humbucker of choice with its coils in parallel. This gets them sounding very similar to single coils while retaining the hum cancellation. In fact it seems odd to me that this wasn't the normal configuration from the get go.
Top

Horsefeather wrote: ↑
Tue Nov 17, 2020 5:20 pm
Another thing for you to try is simply wiring your humbucker of choice with its coils in parallel. This gets them sounding very similar to single coils while retaining the hum cancellation. In fact it seems odd to me that this wasn't the normal configuration from the get go.

If by "humbucker" we mean the PAF-style one that Gibson pioneered, wiring coils in series rather than parallel let them keep using their braided single-conductor wire, and keeps it more in the Gibson camp - it was supposed to sound kinda like a p90 but without hum, whereas parallel is more Fender single-coil vibes to my ear.
Top

Thank you all for your replies!


mbene085 wrote: ↑
Tue Nov 17, 2020 9:25 am
It has been my quest for the last few years to explore these categories of pickups. I love single coil tone and hate single coil noise. Each basic design you listed (stacked HB, Z coil, WRHB) is something I've explored, along with a few others. (...)

Wow, mbene! That's some really cool insight and exactly the answers that I hoped to get!

The Twang-Bucker actually really sounds right down my alley! But as I have this outstanding with that German pickup-winder - I have to ask him to build something alike - or better said tell him what I want (which is the hard part

- so many cool options out there)!

Horsefeather and HarlowTheFish, yes - I wanted to try parallel wiring as an additional option in my P-Rails (kicking out the lame Rails - and having P-90, series, parallel as an option would have been the plan) - but this seems to be impossible - as I'm currently controlling both Pickups's options with one single mini toggle. I'm still looking for a way to achieve this - but as I plan to go for new pickups - these should just have one sound that is worth the change! Something between a P90 and a Jag-like single coil - capable of dealing with lots of Fuzz and looking good in black in an open chrome cover. :-)
Top
Post Reply
6 posts • Page 1 of 1