Talk about modding or building your own guitar from scratch.
Post Reply
27 posts

Like many of you, at some point along the offset journey I felt the increasing urge to have a Bass VI. As a lefty, getting an actual Fender was unlikely, so I decided to go the custom route. I decided to go for the Mk1 style, with the chrome pickup surrounds, for no reason other than appearance. Superficial bastard I am!

In May 2017 I put an order in with USAGC - just before everything started to unravel over there. I got in just in time (well, sort of), because they were still willing to export rosewood fretboards at that time, and offering a finishing service.

Then I waited. And waited. And waited. Tried not to bug them too much, but sent a polite email every couple of months to see what was going on. Tommy replied to the first few, very sweetly and apologetically. But late in 2017 the airwaves went silent, for reasons that have since been documented elsewhere. As 2018 rolled around, I almost gave up on seeing a return for my money, when I finally got an email in March telling me my order was being sent to the paint shop! Progress!

Finally, in late April I got my stuff, after a fairly epic 11-month wait. Fortunately the build quality seems to be very good, otherwise I'd have been mighty pissed off! I gather, from Tommy's replies early on, that most of the work was actually done pretty soon after I ordered, but then it sat around on a shelf for months on end while things got weird over there.

Anyway, back to the guitar....

A few pictures as it arrived from USACG: 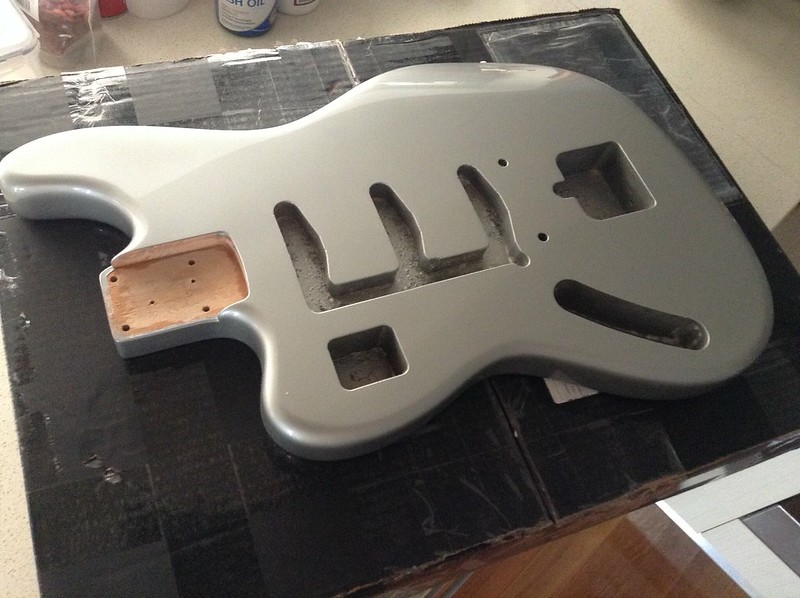 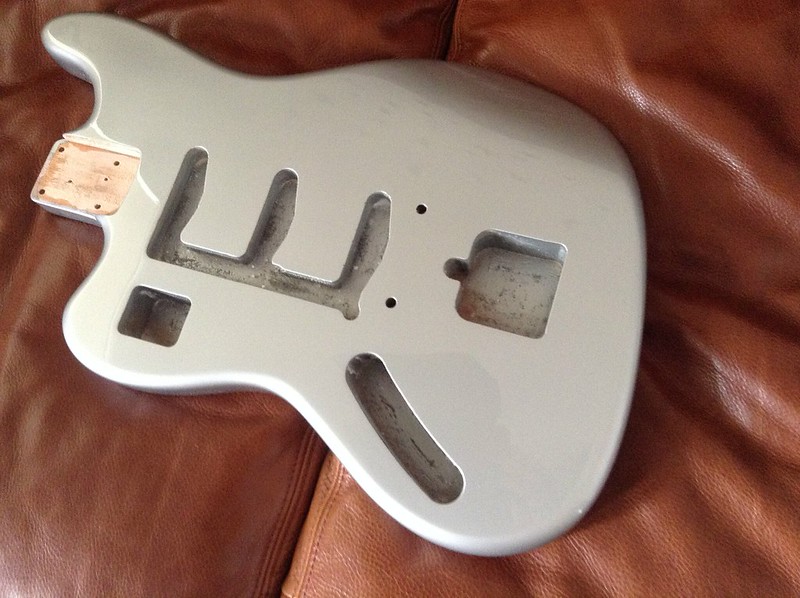 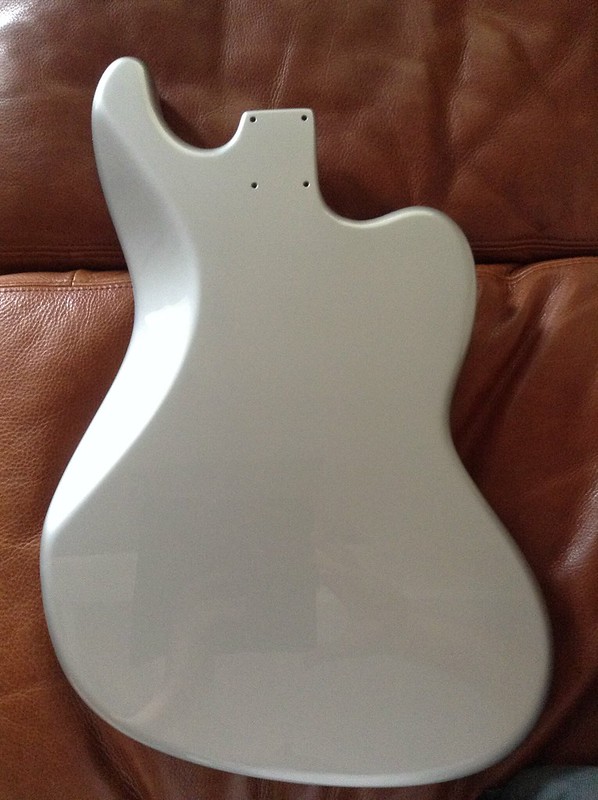 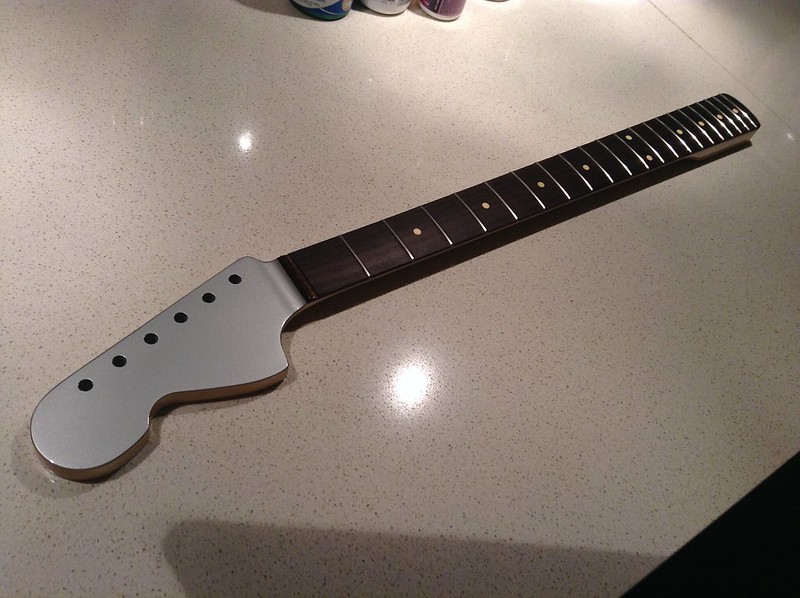 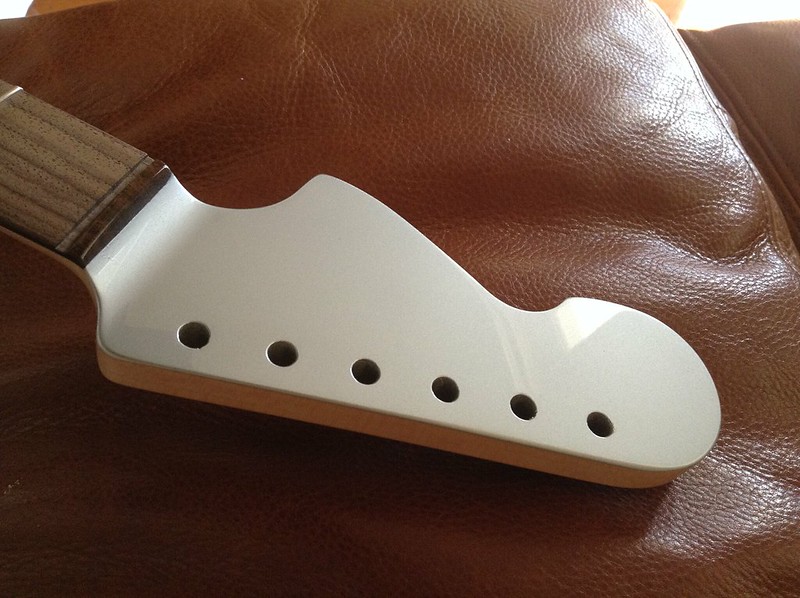 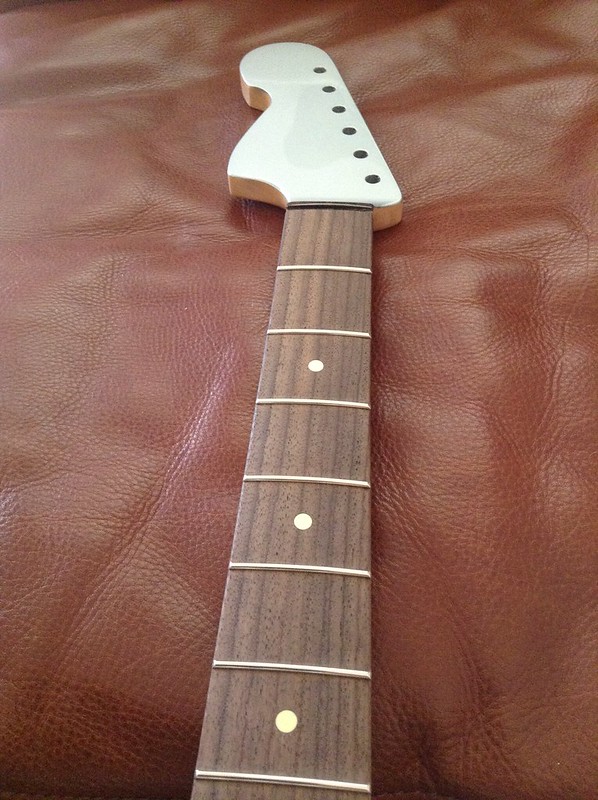 looks great! I've been contemplating a lefty VI for a while too!
"There's nothing more pathetic than an aging hipster." -Dr. Evil
Top

Hell yes! I love that Inca Silver too! I'm thinking about some sort of aesthetics for my VI project that are reminiscent of 1950's Sci-Fi and that silver kinda does that. Very nice!
Pickup Switching Mad Scientist
http://www.offsetguitars.com/forums/viewtopic.php?f=8&t=104282&p=1438384#p1438384
Top

Thanks! I love the finish too, especially in good light where the silver really shines. I actually felt a bit bad hacking into the body to widen the pickup routes.

Man I wanted to do a bass vi with them like 4-5 months ago. It was a nightmare just emailing them. I went through multiple people, got different answers... First they could, then they couldn't. Then the melt down happened and they told me there was a long waiting list and I had to wait for the 'custom shop' to open at the first of the month or some crap. Then I asked if I could just put the order in now through the email since we had it all ironed out. They said no, but they would email me when it was opened... I never got emailed and missed the opportunity to order and had to wait another month. I was out. They also said that only one guy in the shop knew how to do binding and that would add another FOUR months to the wait time. Out.

Plus I wanted a gen 2. As much as I liked the gen 1. I wanted that strangle switch.

EDIT to add that I have one being made now through our very own Jazzprod!
Eric Harris: I’m sorry I have so much rage, but you put it on me.
Top

beautiful! can't wait to see it come together

this is awesome! can't wait to see more progress.
Top 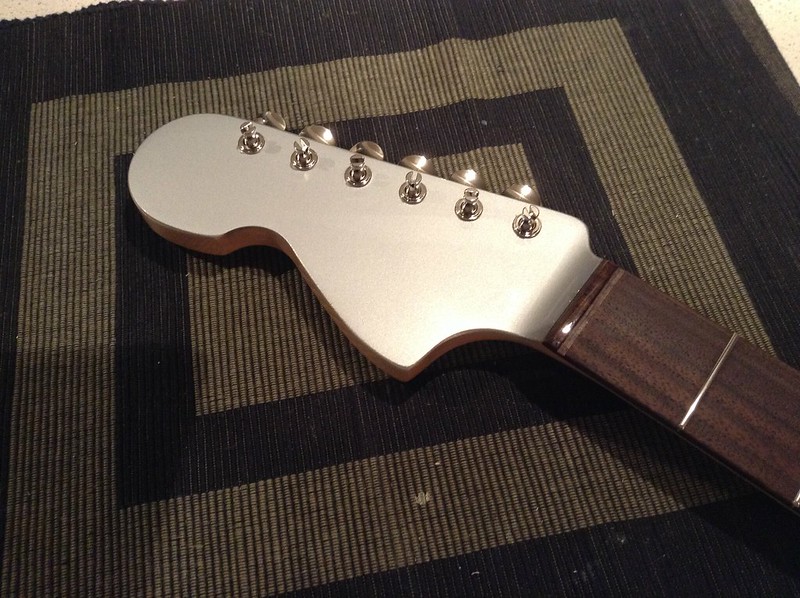 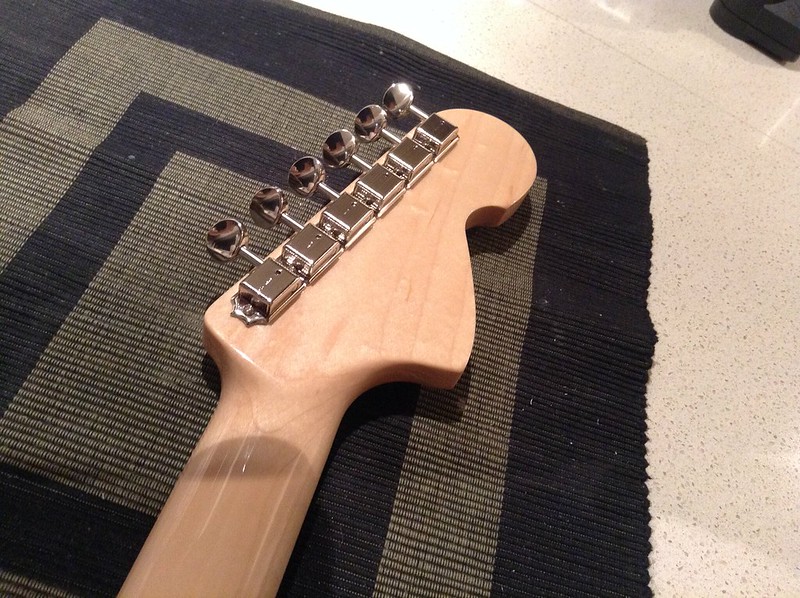 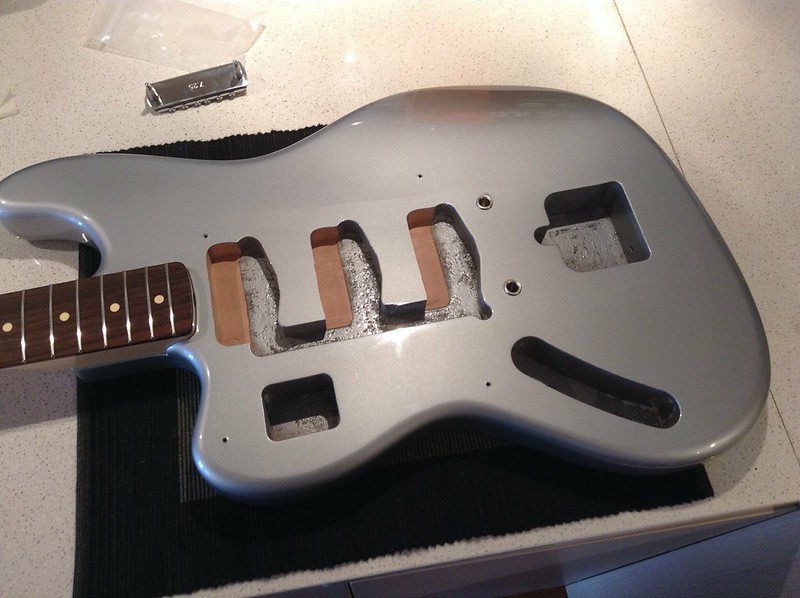 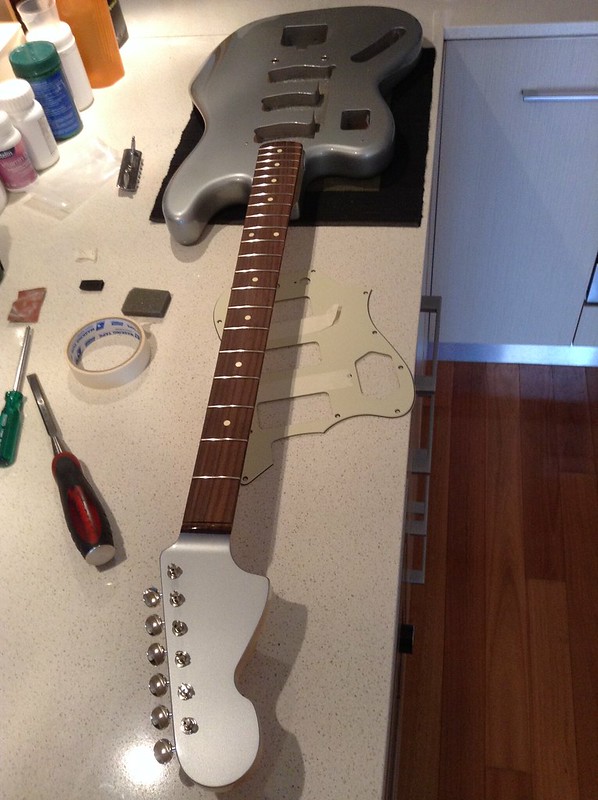 On the home straight for this build!
Installing the vibrato and pickups - Curtis Novak 1961 replicas (well, almost replicas - no braided lead on these ones). Not cheap, but reportedly very good. 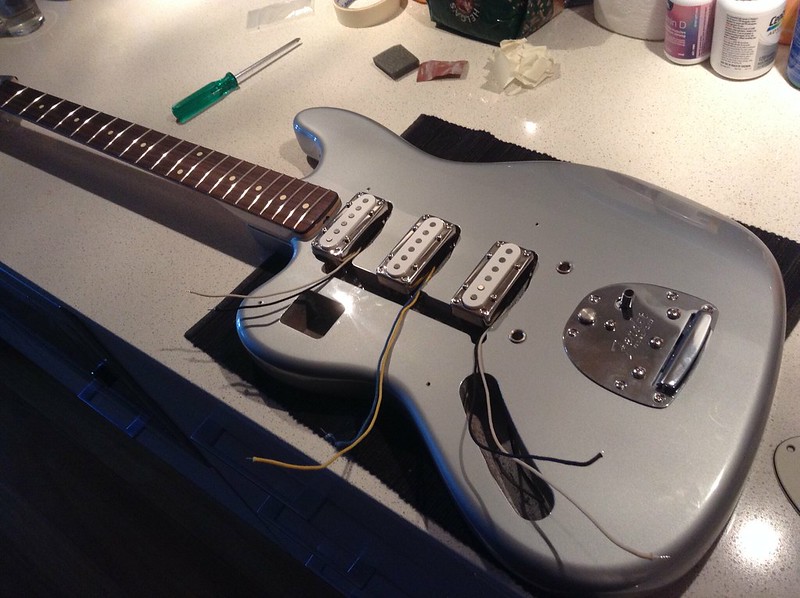 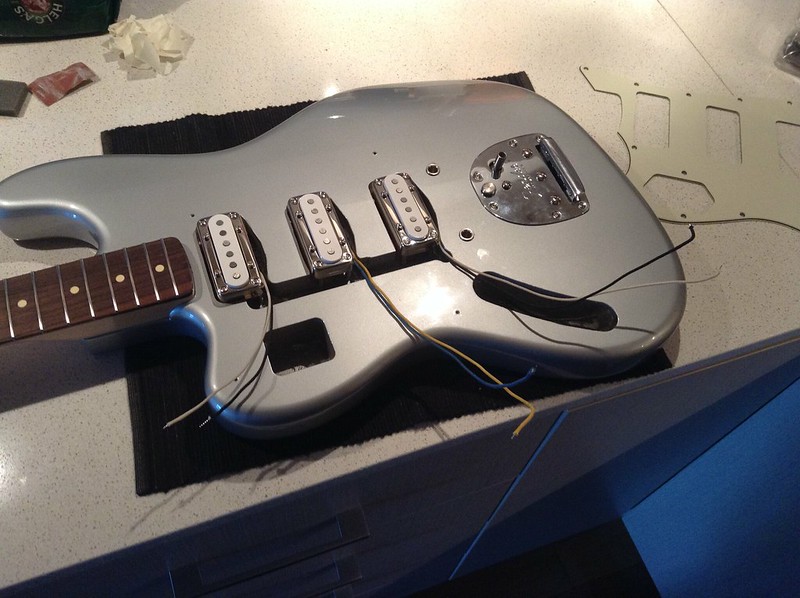 This project has been going way too long, and i'm super keen to finish it!

Two months isn't actually too bad. I assume a little longer because that was when you posted pictures of the painted body, but still. I've got projects I've been working on for 3 years or more. I do quite enjoy working on things, but some projects have been around long enough that I just want them done, so I completely understand the sentiment. I'm looking forward to this one coming together!!!
Pickup Switching Mad Scientist
http://www.offsetguitars.com/forums/viewtopic.php?f=8&t=104282&p=1438384#p1438384
Top

It was actualky a fair bit longer than 2 months. I ordered the neck and body from USACG mid-2017, but they took almost a year to deliver (due to their internal issues). So basically I had no pics to share until fairly recently.

Anyway, I'm stoked that it's finally coming together!

So, basically, you're just smarter than I am and don't post anything until you have something to show

Wiring all done, hardware installed. Luckily I got the Staytrem bridge several months ago...would be much tougher now.

Just need a nut, strings and a set-up, then I'll be ready to, errr….shred?

Loving the way this looks - here's hoping it sounds good. 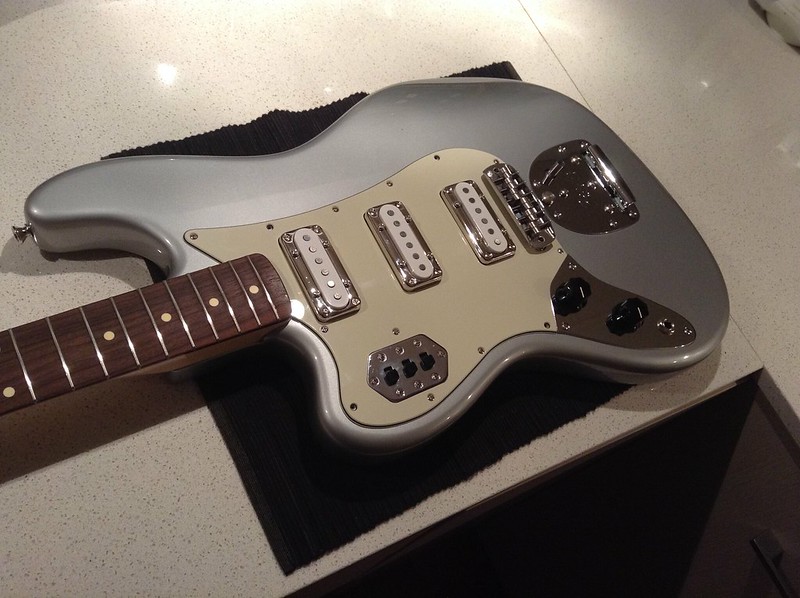 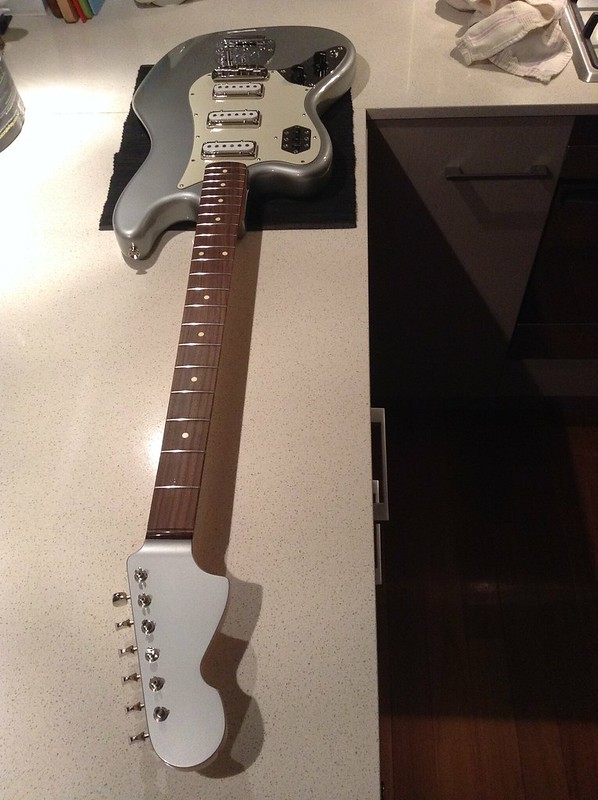