Talk about modding or building your own guitar from scratch.
Post Reply
145 posts

ThePearDream wrote: ↑
Wed May 27, 2020 7:29 am
CV vibrato with AVRI spring & spring retainer (I wanted to see if this $6 upgrade would be worthwhile to do on these cheaper units)

What's the word on that upgrade? Worth the $6?

So far I think so. The AVRI unit is great of course, but given that I only play at home, I don't need every guitar to use top shelf components. It feels like it might be a little bit stiffer and smoother.
Top 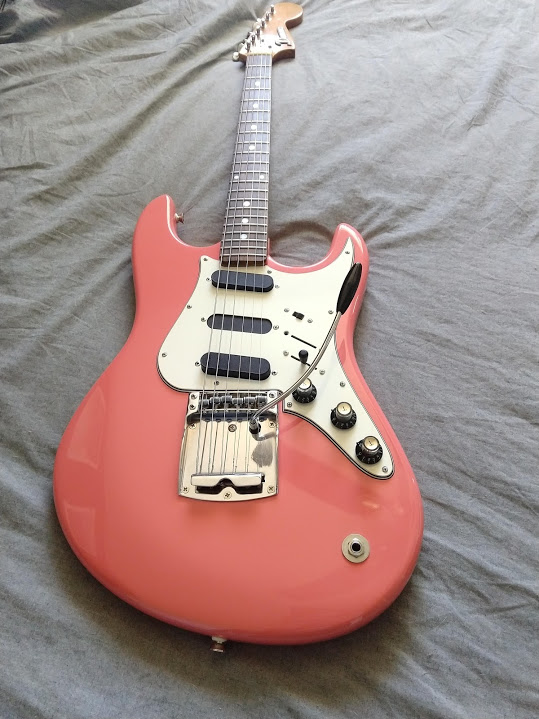 I previously mentioned that I was waiting on some 3D printed items to arrive. The first item is a custom switch tip.
I had noticed in pictures of vintage examples that these used a unique style of tip for the blade switch. The Spartan below is the clearest example I can find. 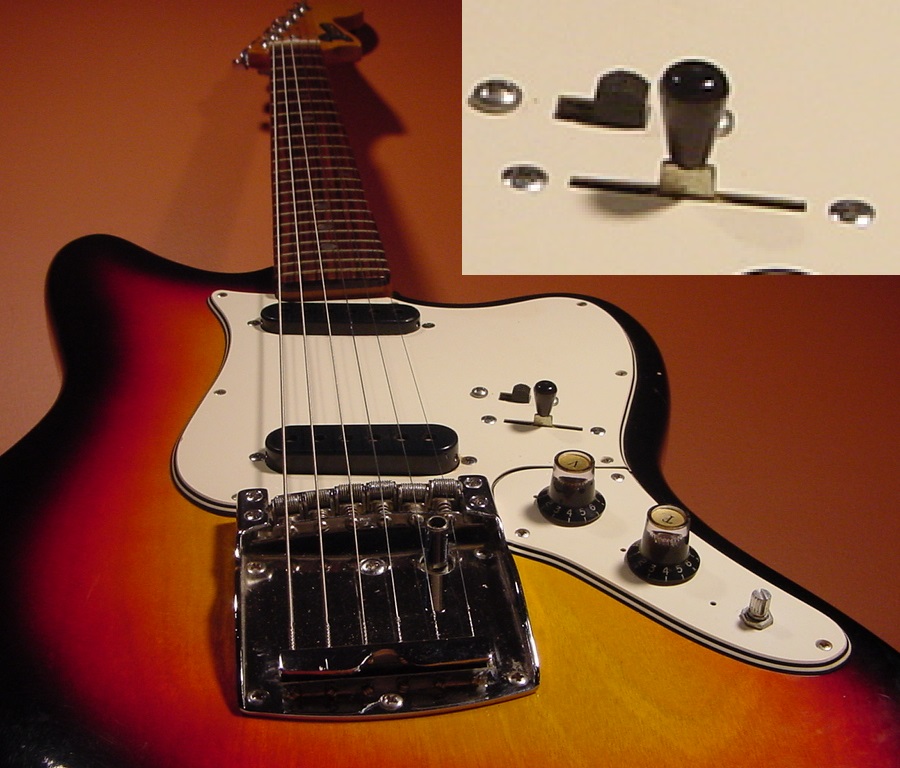 I think the odds of ever finding an original tip are pretty slim, so I drew up my own. I had no dimensions to go off of, so I had to eyeball everything. Mine seems to be a bit thicker on the base, but I think it gets me pretty close. 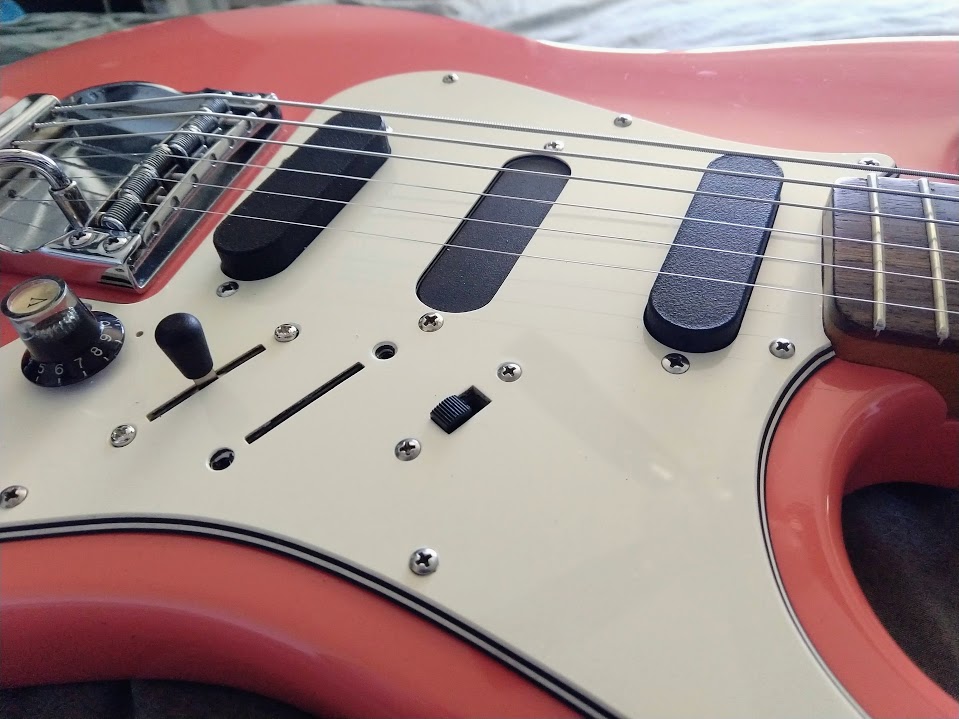 The other custom item is in the pic above as well. Do you see it?

I had a custom pickup hole filler printed. I based it off of the pickup cover, but squashed it down and extended the base flange all of the way around to completely fill the hole in the pickguard. I will probably leave out the middle pickup permanently. The bridge requires these to be raised pretty high, and I'd just rather not have a middle pickup in the way. This also doesn't require any permanent mods to the pickguard, so it's win/win I think. 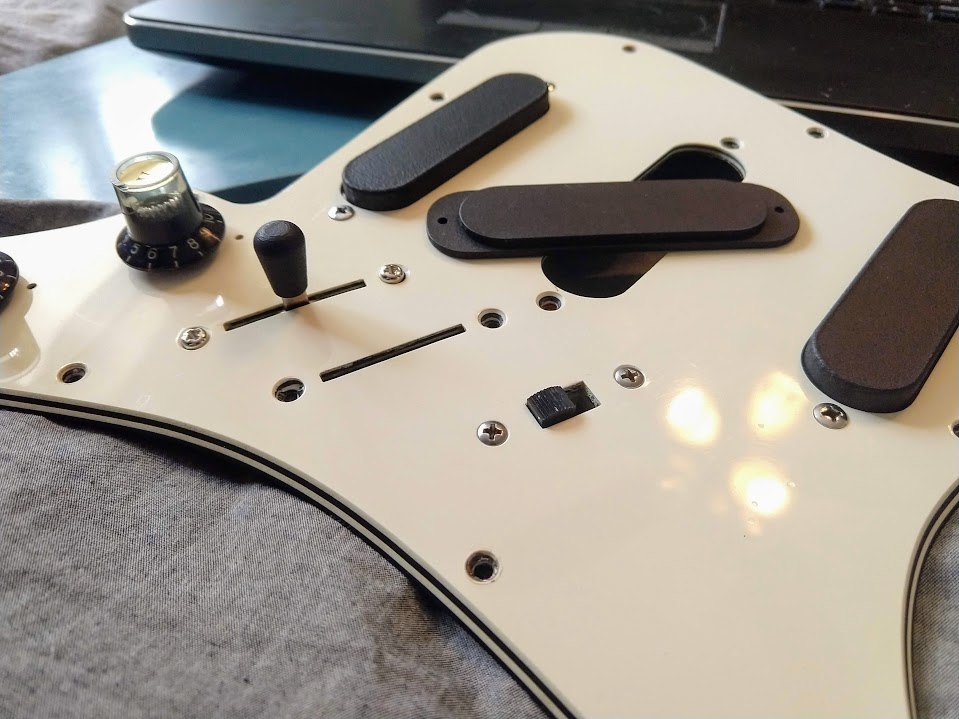 Then I was able to completely shield it from the rear without any copper showing. 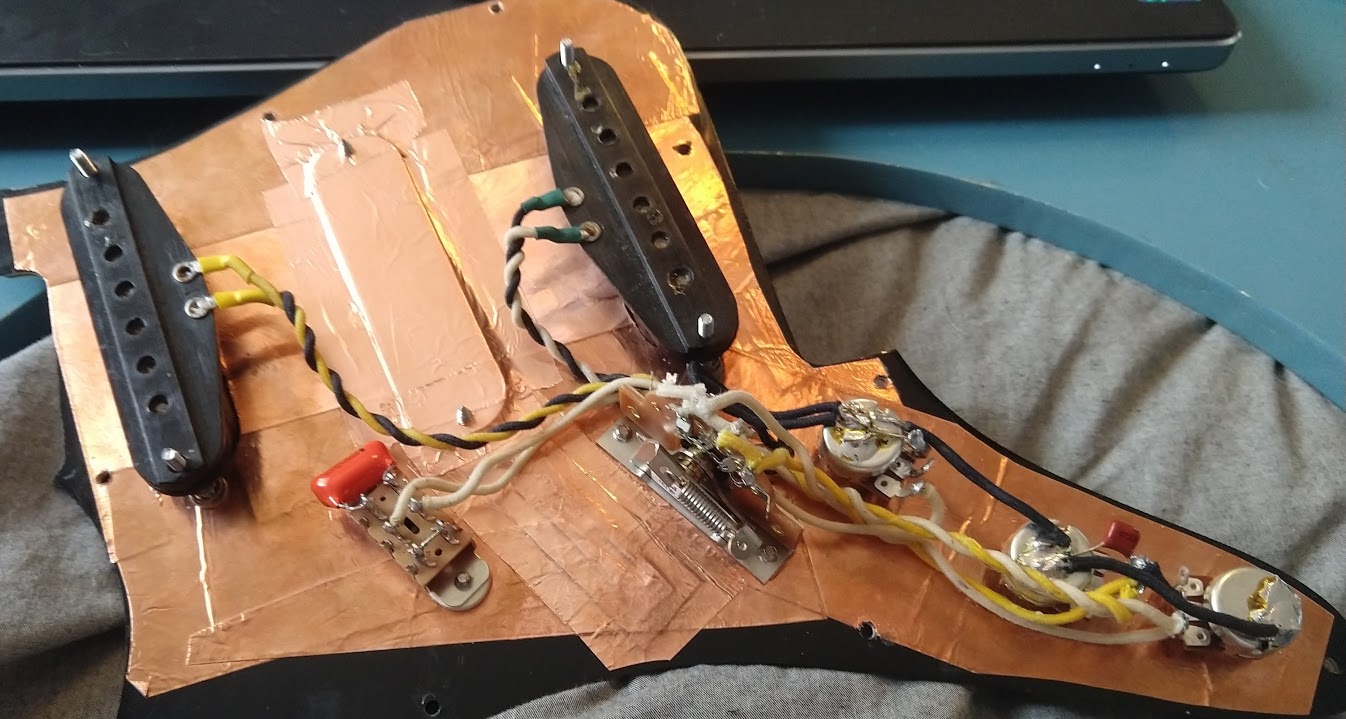 I was able to get my hands on an original truss rod cover, along with the Domino badge I picked up a while back. Also showing are the Kluson replacement tuners and the new nut and frets. 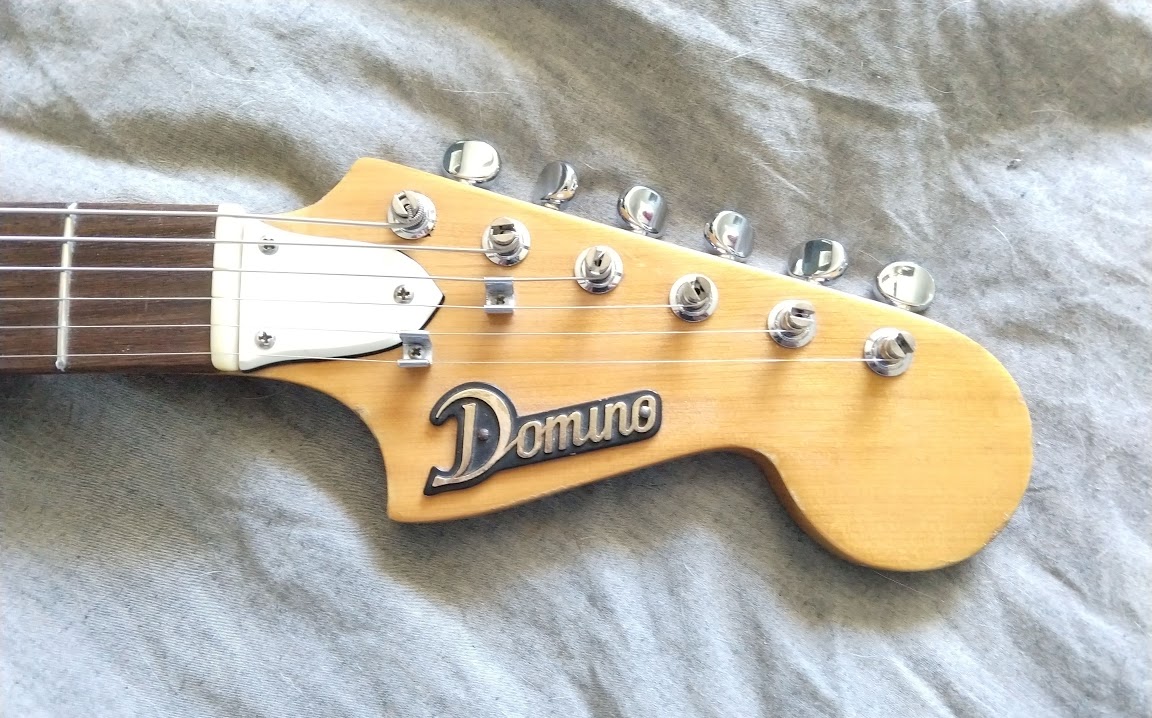 It already had the rear trem cavity cover. I made the neck vanity plate and jack cavity cover with some scrap bwb material. I will keep my eye out for vintage replacements though. That belly contour is suuuper deep btw. 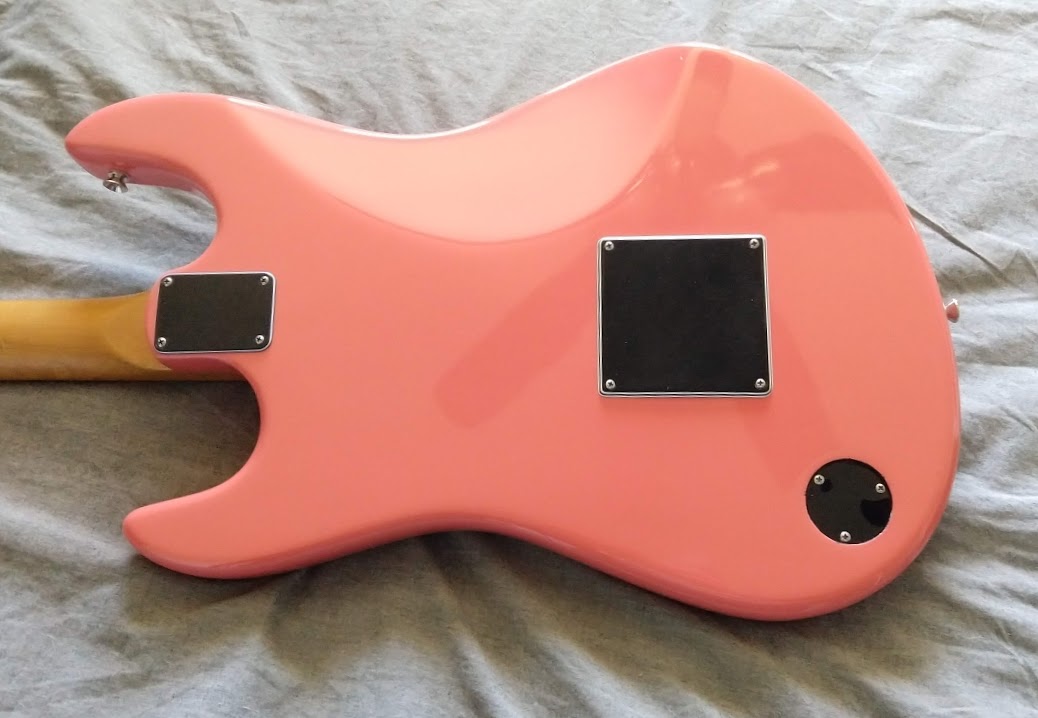 I also took the bridge and trem apart and thoroughly cleaned and polished everything. Some of the original screws were pretty damaged, so those were replaced as well. The head of the spring adjustment screw was almost totally ruined, so I swapped in the spring, retainer, and screw from a Squier. Once I'm able to wander around the hardware store without any guilt, I'll find a replacement screw and put the original spring and retainer back in. The rear cover plate will be pretty convenient then, as I won't have to remove the trem from the body.

All in all, I'm really happy with how this turned out. It's a really fun guitar, it sounds great, and it looks pretty good now too. 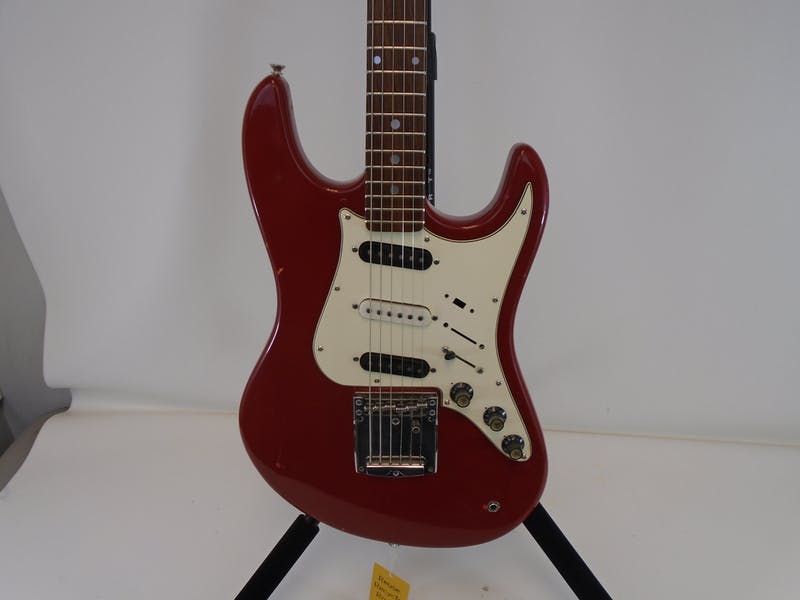 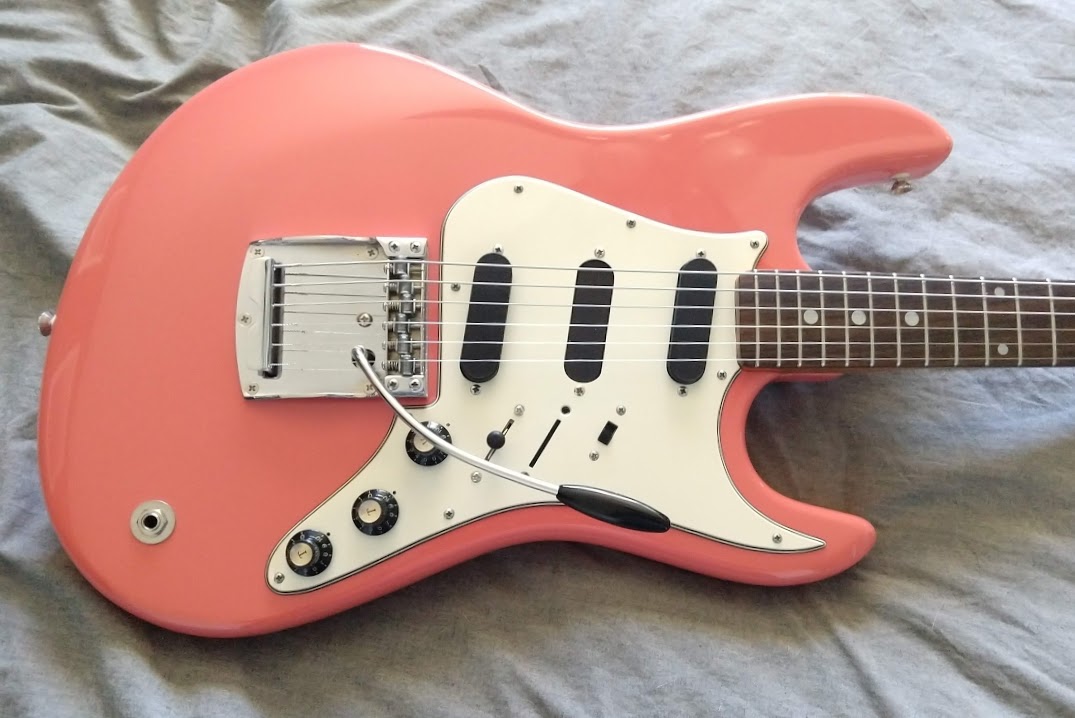 Thanks for the tip (pun intended)!
Top

Thanks for the tip (pun intended)!

I think it's a recent item, really... The first and only review is dated from April 22 this year. I think I've spotted it maybe a couple of months ago, max, and saved the idea for later.

Glad to see it went to a good home!

I just read through this entire thread and I'm floored by the amount of incredible work you do. Every single one of your projects looks amazing and sounds super interesting.

I'd love to know more about that fretboard radius jig, looks cool!
Top

Thanks so much everybody! I appreciate the positive comments.

I'd love to know more about that fretboard radius jig, looks cool! 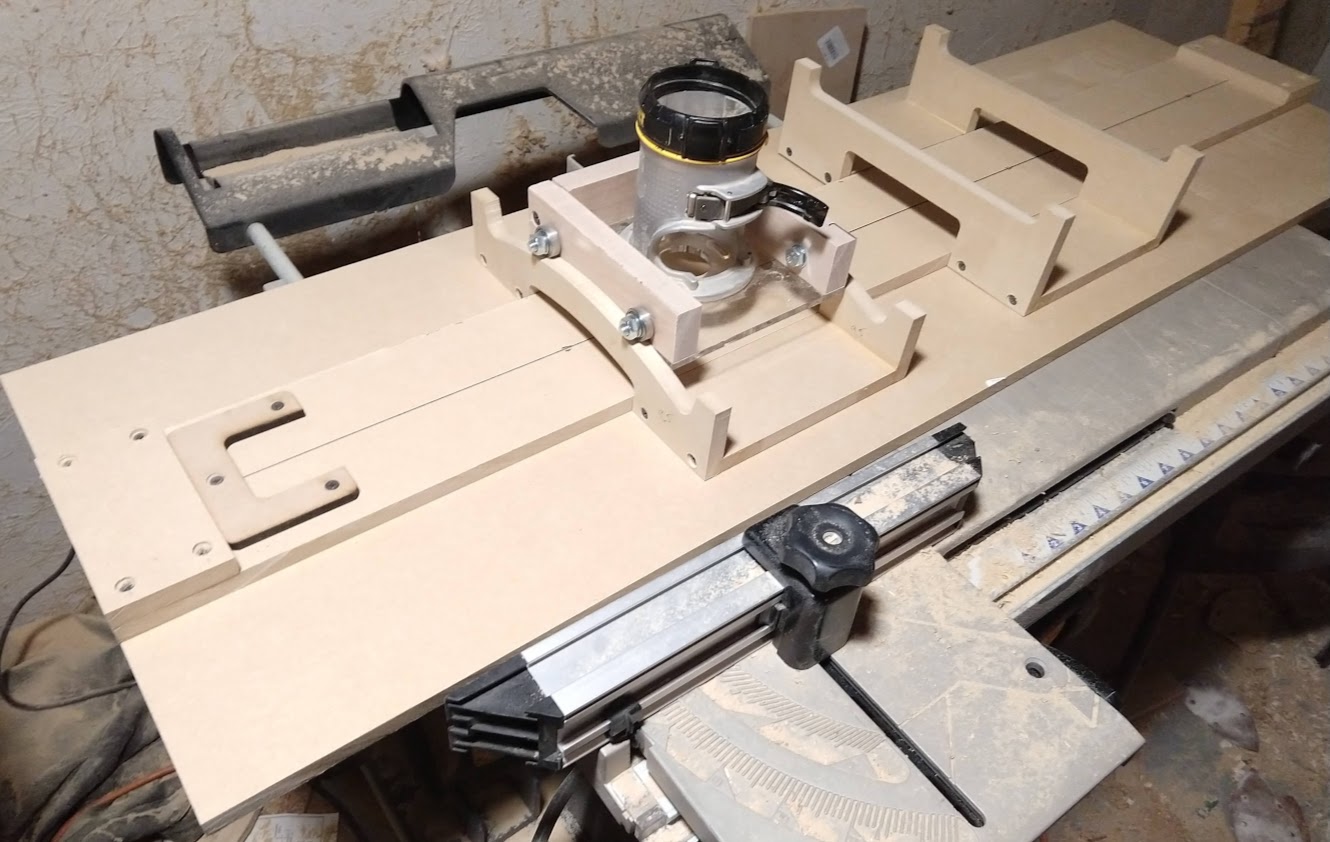 It's based on a general design that has been around a while. The curved sled slides left or right to go the length of the fretboard. The router carrier has roller bearings and moves forward and back on the sled. The curve of the sled is oversized so that when the end of the router bit is 1/4"above the platform, the desired radius will be created

I have a piece with a heel cutout added on so I can pop a neck with fretboard in. I then use a single clamp further down and the neck is secure. Then I can use the flat sled to thin the headstock down.
Top

Love the router jig too. Might have to build my own soon!
Top

I had de-prioritized my gratuitous guitar projects since the start of spring so I could concentrate on outdoor homeowner projects. I have moved many many cubic meters of sandy soil by hand. I'll give a quick recap of that. Feel free to skip ahead to the guitar stuff though.

My back fence was long overdue for replacing, so I decided to knock that out finally. The problem was that my yard sloped down towards my fence and decades of insufficient vegetation to control erosion, in combination with a previous owner installing sheets of aluminum along the base of the fence had created a situation where the old fence was more or less buried. So to start, I had to dig down to get near the level of the soil on the other side of the fence, creating a trench approximately 70 feet long by 2 feet wide by 1-1/2 feet deep. Then, I had to dig down even further to remove the aluminum sheets, going down almost 2 feet more in a narrower trench. All this just to get to the point where I could take the old fence down. This was followed by demolition of the old fence, fine tuning the soil level of my "trench" to match the other side, digging post holes, concrete work, etc. etc. Then, eventually I had a strong and beautiful new fence. Then a I took a few weekends "off" to paint one side of my house. Then it was back to digging - because I still had a two foot cliff in front of my fence. I set to work on regrading the earth leading to the fence, going out 12 feet in preparation to install a retaining wall next spring and working against a mid September deadline that I set for myself, so I could get some evergreens planted in the newly graded area at the perfect time of year. So here it is, the end of August and I have maybe 1 cubic meter left to move and am mentally preparing myself to drop a grand on trees.

With all of that going on, and working overtime at my day job, there was just no time for guitar building. I have been working on a ton of pedal projects though since it is easier to find a few minutes here and there to solder in a few components. Here are a few that I've completed recently:

Cornish G2 Fuzz clone. This was from Aion. They use the name Cygnus for this project, which means swan, so I decided to try out this feather pattern. 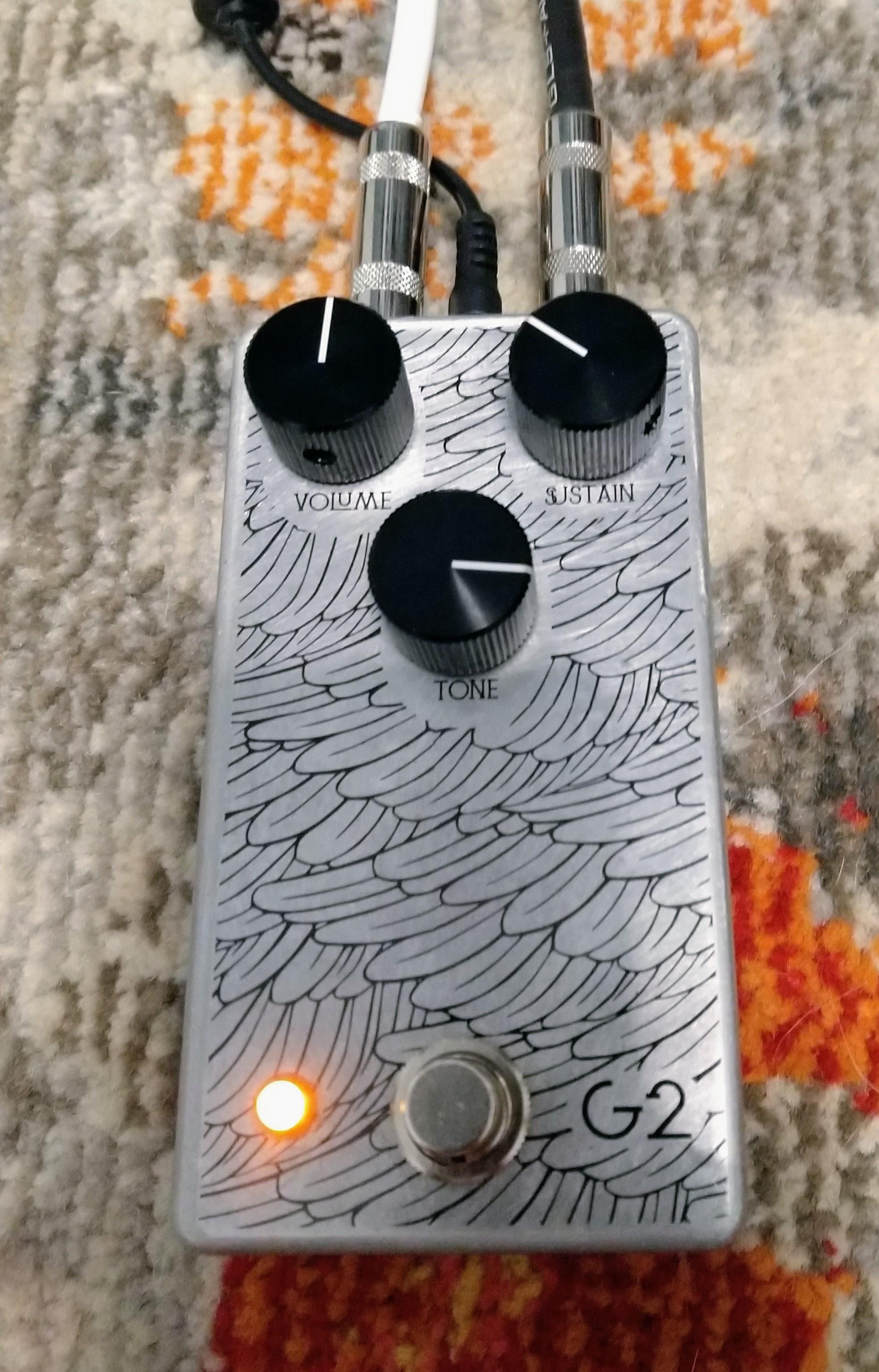 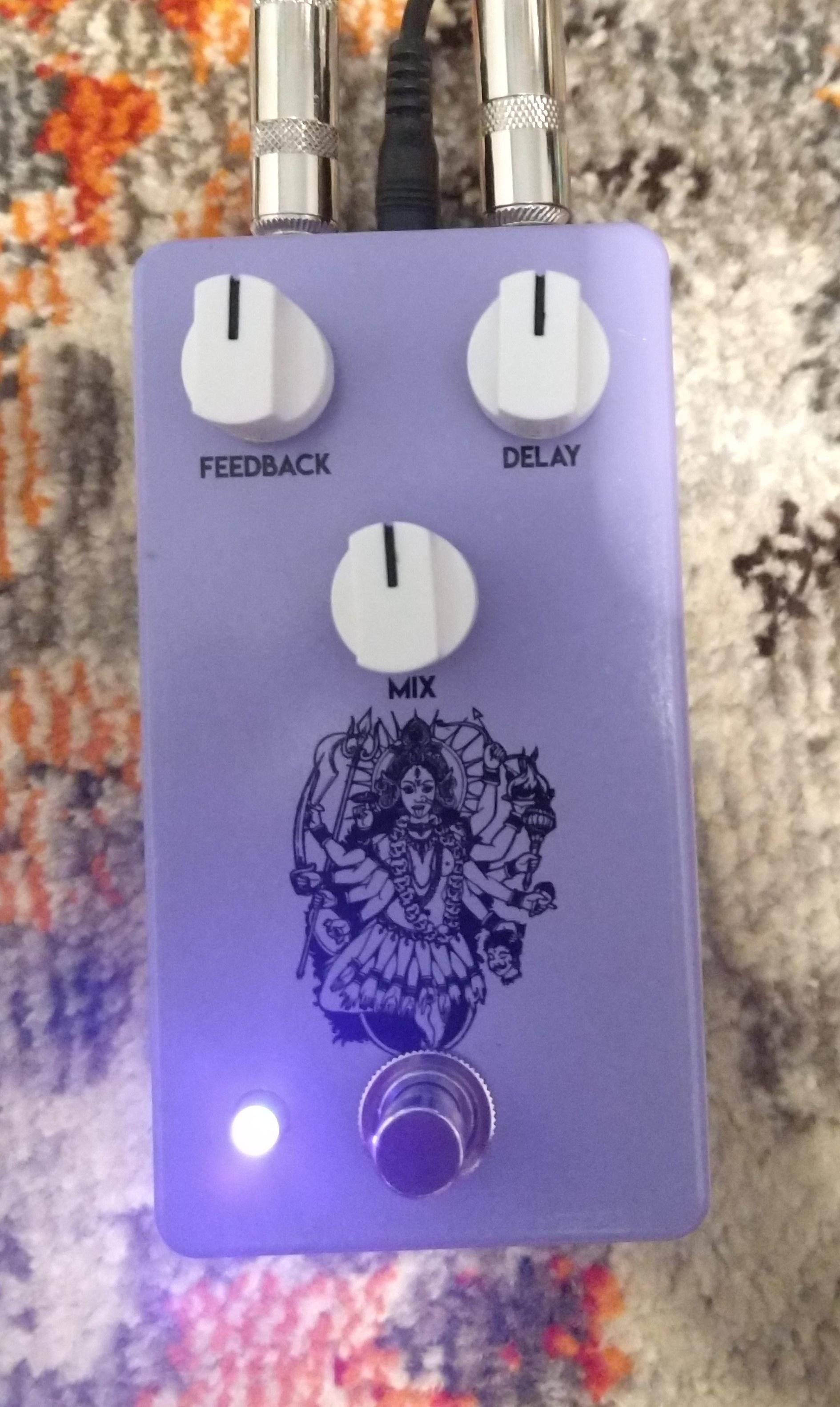 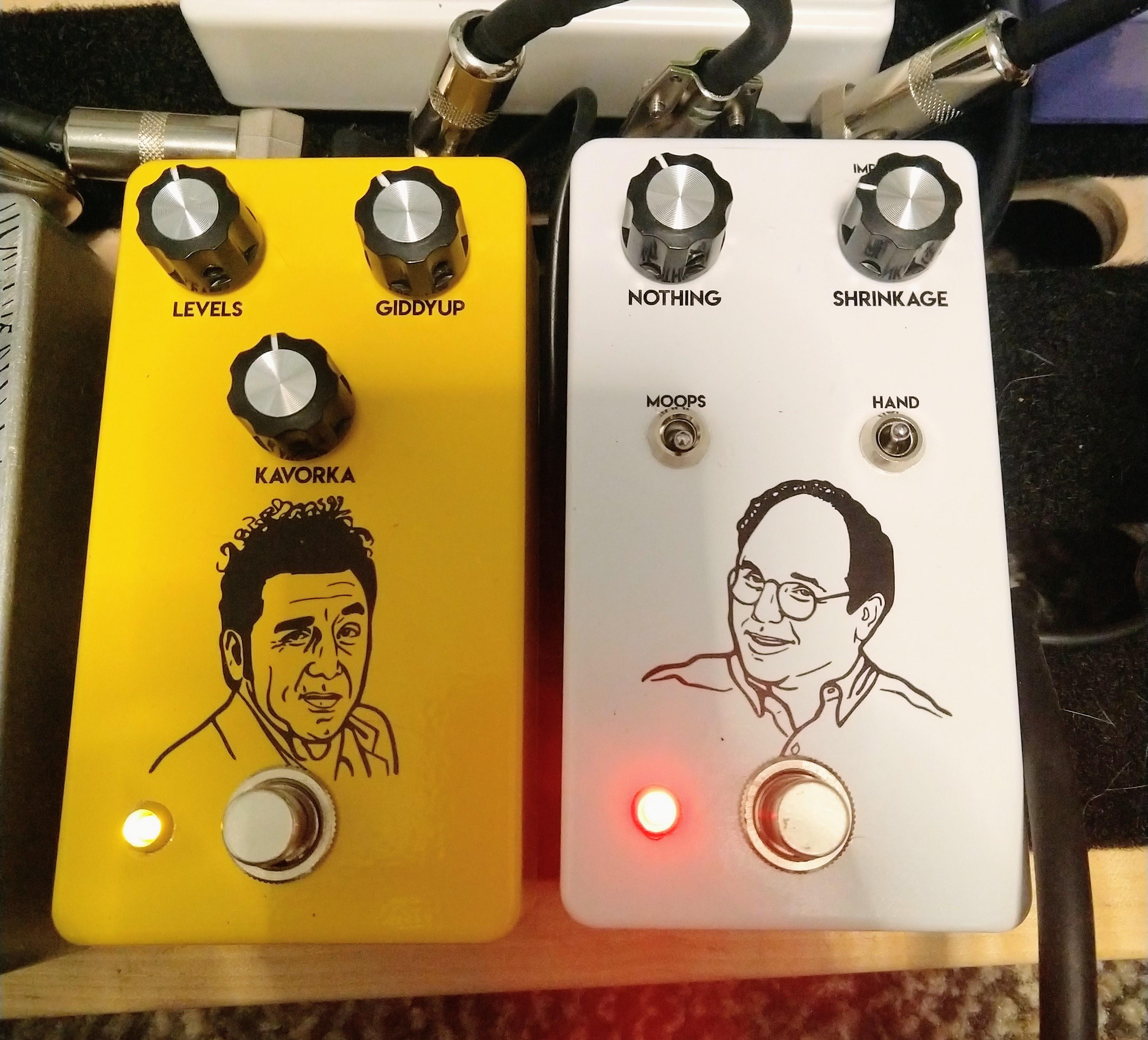 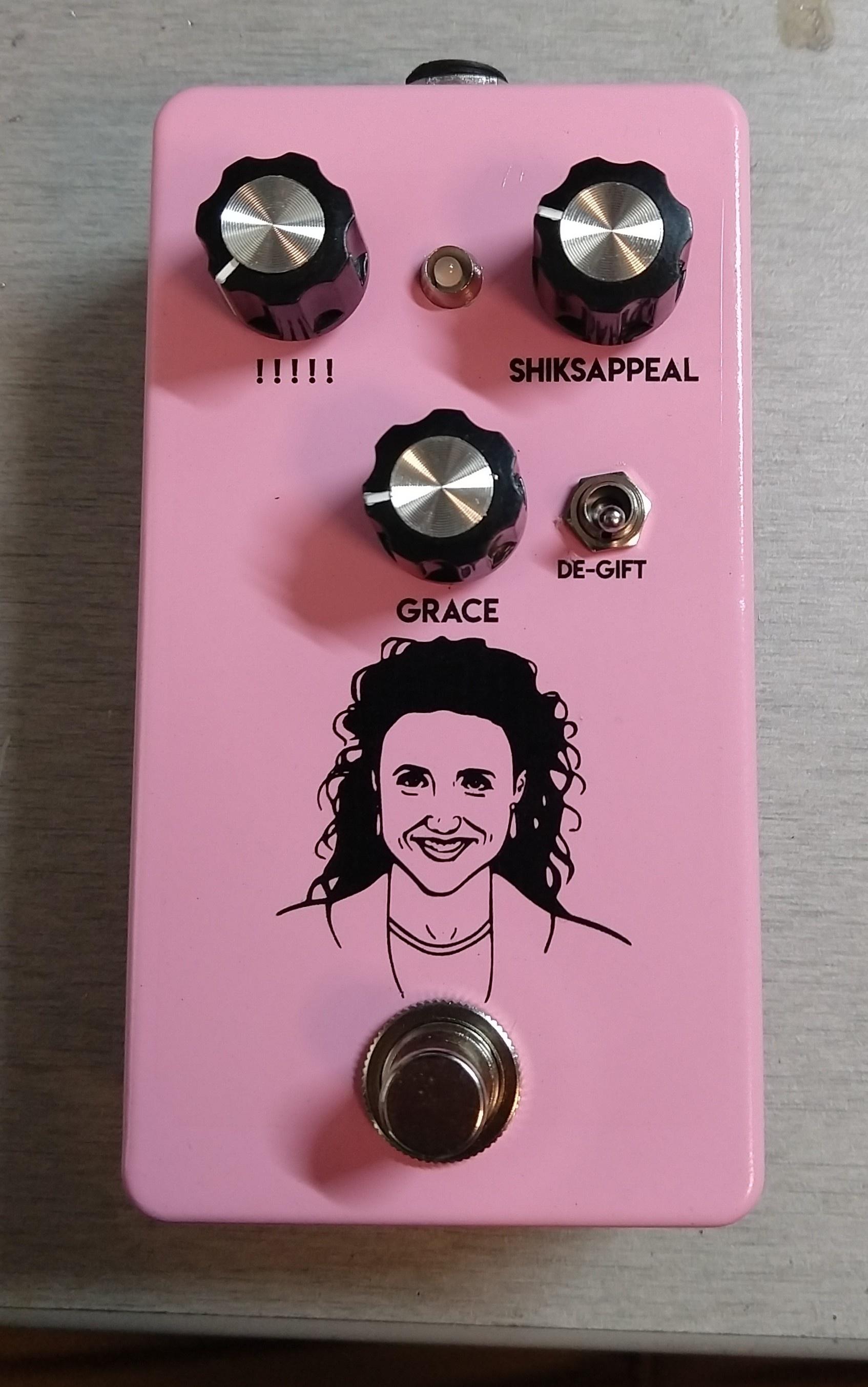 My Jerry Seinfeld pedal is almost done, I'm just missing one pot. There are five other pedals in various states of completion too. Including a few that are giving me exciting new challenges. Clones of the Spaceman Gemini IV - Dual Fuzz Generator and what I'm most excited about a clone of the Spaceman Orion Analog Spring Reverb to which I'm adding a few special mods.

As for actual guitars, I didn't have any particular plans for anything in the immediate future. But then a few weeks ago I was filling up on gas and was so pissed off that during the middle of a pandemic they had let the receipt paper run out at the pump and I had to go inside for my receipt and deal with an idiot that couldn't even be bothered to wear a mask correctly, that I ended up snapping off the fuel door of my car. I bought a used replacement off ebay and ordered some matching paint.

So now I am left with 95% of a large spray can of Sage Green Metallic (and I already have a few cans of clear, having used the same company for my pink Jazzcaster a few years back). OSGser adamrobertt finished a Jazzmster in this same color last year and I think his looked pretty darn good. I have a pair of my custom 3D printed jaguar covers from other projects that I ended up abandoning and some poplar body blanks ready to go, I should just need a few parts and pieces. I'm hoping that I can get this painted before the weather turns shitty for the year.

Here's what I'm thinking, I've always liked the ugly pickguards on Broncos and Musicmasters from the 70s. So this is kind of an upgraded Bronco with a Jaguar vibrato and two bridge pickups wired to a 3-way switch to get Series, Parallel, or Single coil options, similar to the bridge pickups on my orange Jagstang build. It has a bit more going on than a Bronco, but it's still more stripped down than a Mustang or Jaguar. Black plastics and a Pau Ferro neck - because I think it has lovely grain that works well with green. I will do a swimming pool route in case I want to switch up the pickup locations down the road and may use a Mustang control plate instead of one large pickguard. 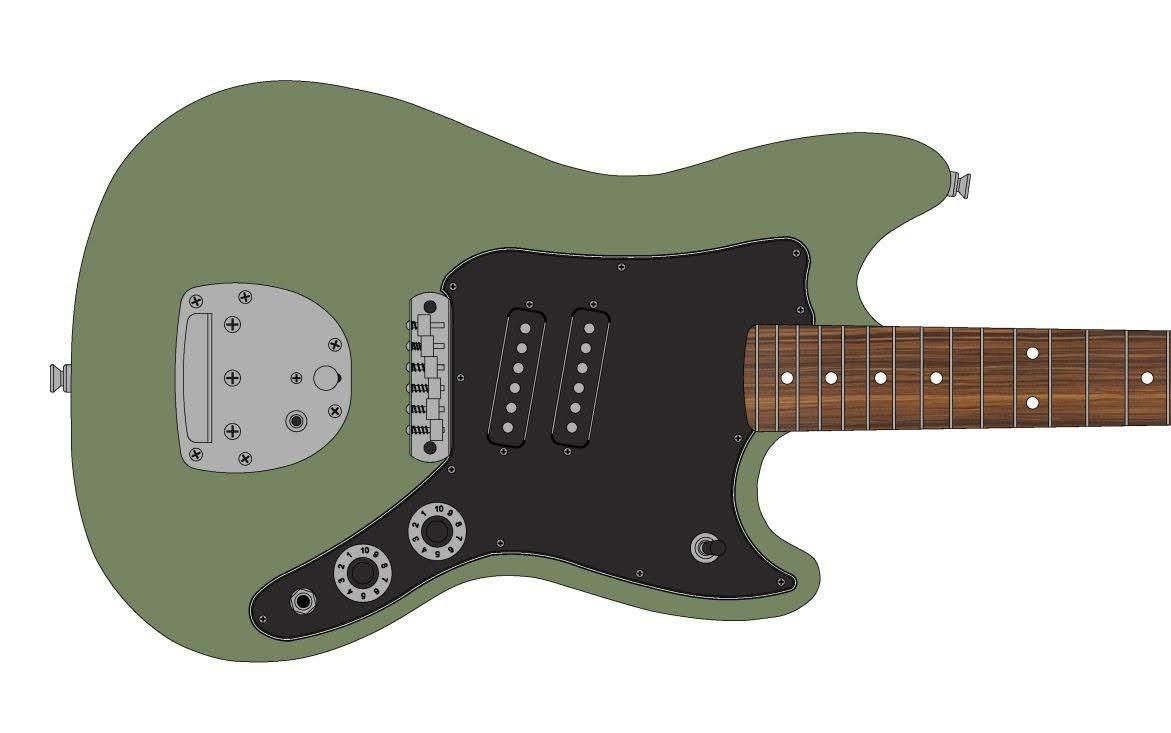 Since I have a few poplar blanks ready, I would also like to start on my Domino copy this fall

And my wife wants me to build her something short scale. Body style is TBD, we need to find something that will work for her curvy figure while sitting down.
Top

Thanks! Jerry is a Timmy. I currently have a Chinese Timmy clone (Caline Pure Sky) that I love for a low gain OD, so this will replace that.

. Here's the full list of in progress pedal projects: