For guitars of the straight waisted variety (or reverse offset).
Post Reply
136 posts 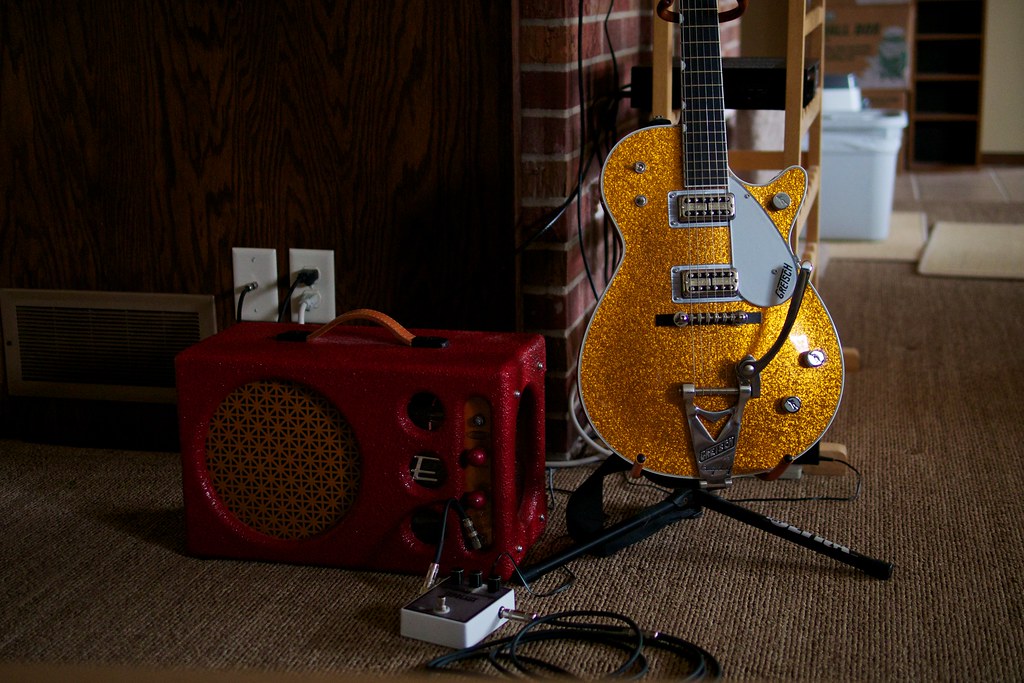 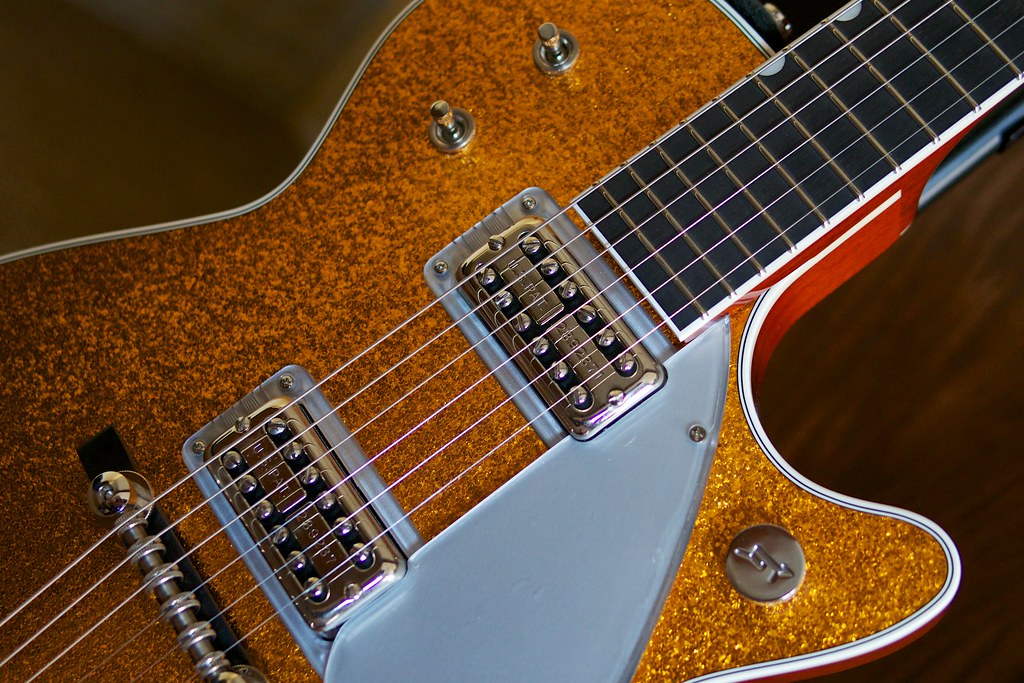 Impeccable guitar.
“Now I am quietly waiting for/ the catastrophe of my personality/ to seem beautiful again.”- Frank O'Hara
I am not an attorney and this post is for entertainment purposes only. Please consult a licensed attorney in your state for legal advice.
Top

Some gorgeous guitars on here, guys!!!

One nice thing about Gretsches is that their aesthetics. Even lower end models just look classy.
Top

As some of you may remember, I spent way too long building a Gretsch/Telecaster hybrid. I absolutely love the thing & find myself playing it more than my other 2 vintage electrics... 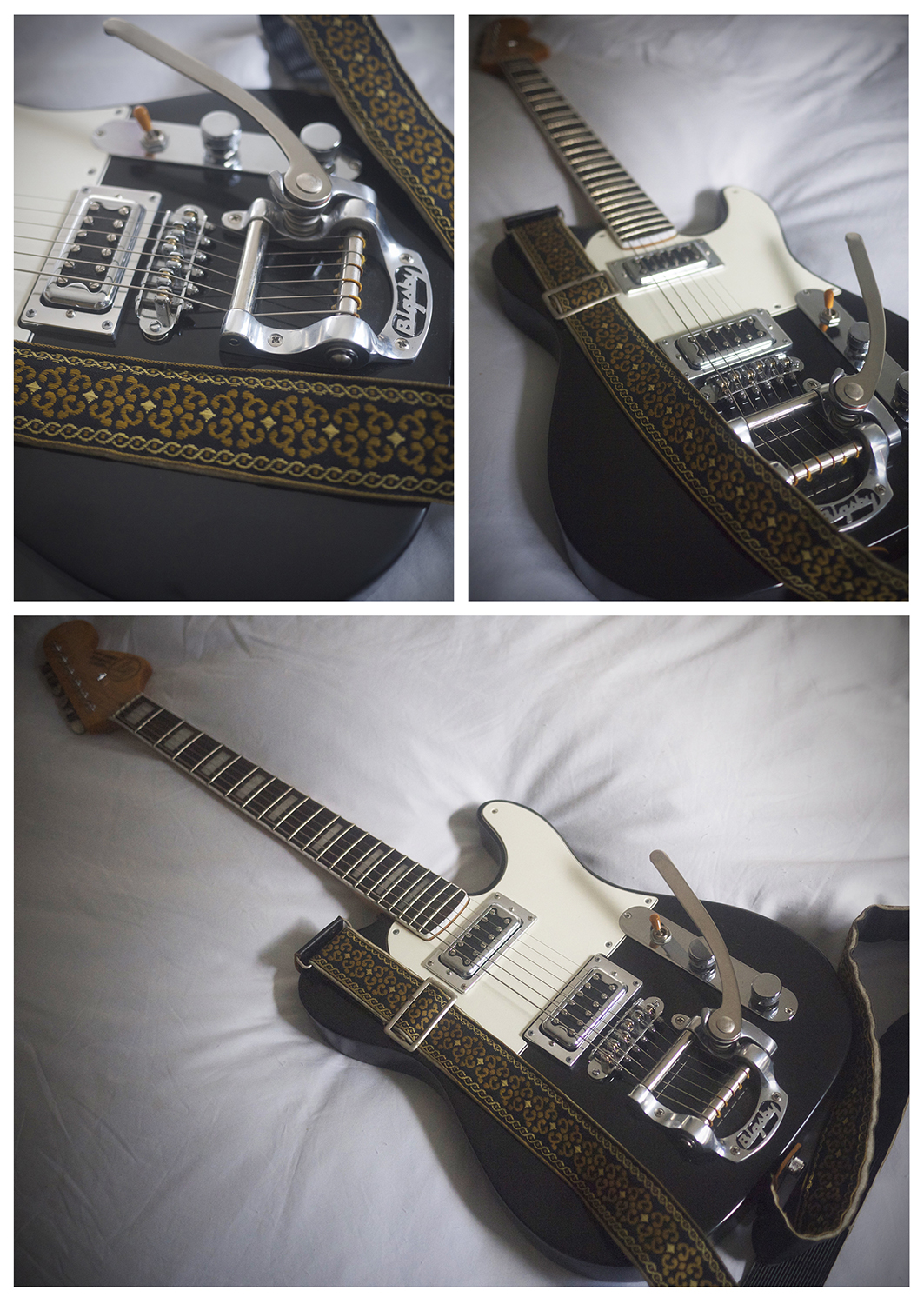 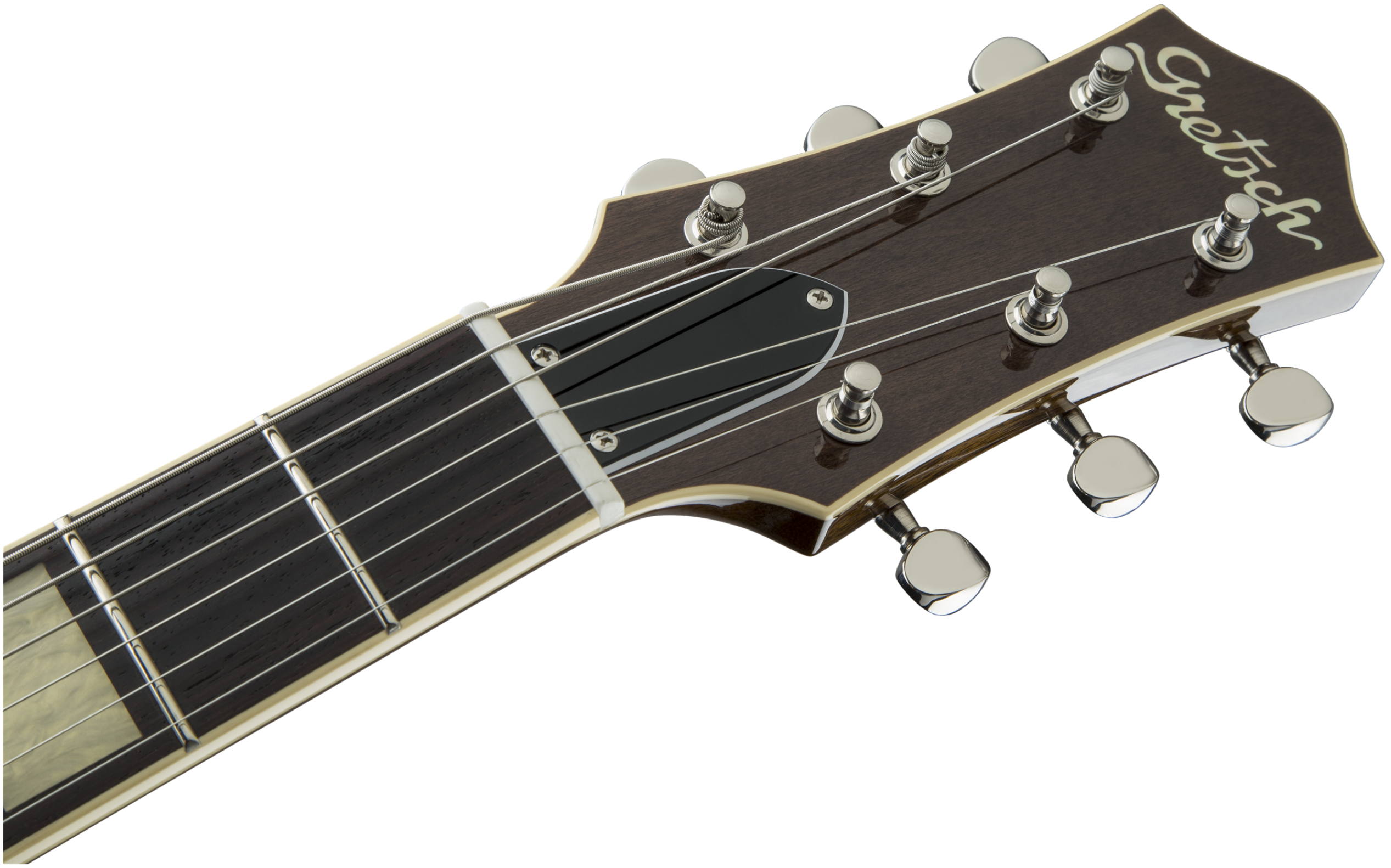 One day, maybe. Sigh!
You think you can't, you wish you could, I know you can, I wish you would. Slip inside this house as you pass by.
Top

Lower tear of the Gretsch line 2420T Walnut my first Gretsch and its a lovely instrument:

I've owned several gretsches, but I'm still lying in wait for a nice duo jet DSV to pop up. I say it in every gretsch thread, but I firmly believe that Japanese gretsches are the highest quality mass production guitars being made right now.
Top

Oh and my non guitar playing buddy owns this beauty that he picked up in a charity shop for £200 or £250 - just to annoy me I think - the Dearmond pickups are instant Jesus and Mary chain: I just posted my NGD for my new Falcon. I love Gretsch. I've owned quite a few through the years. Filtertrons are my favorite pickup, but I like all of the Gretsch pickups.
Top

Some amazing guitars in this thread that totally put my dead ordinary ones in the shade,

Wow David! It is Gretsch City Central round yours, it seems!!

Huh ... thinking about it I'd never have classed myself as a big Gretsch player. I like them a lot, and I've had a few ... but I'd always class myself as an ES Gibson player, or a Jazzmaster player. But when I started to list out how many Gretsch guitars I've had I was surprised!

I haven't had a Gretsch since then. I came close to buying a vintage late '60s 6120 a while back ... but that was just as Operation Castle began and responsibility kicked in. The only one of those that I truly miss is that '67 6119 ... that guitar sang. It was just incredible. The current owner (from whom I bought it and to whom I resold it) still has it ... he's a store owner and could have any number of superb guitars, but he's kept that Gretsch. It's a really beautiful guitar - so totally out of kilter with other late '60s Gretsch guitars I've played ... a weird freakish outlier of brilliance. Huge baseball bat neck and great sounding pickups - anyone who has ever played that guitar has smiled ... and that's the best test there is for an instrument.
Top

Aye... I keep waiting for him to sell it, Hopefully i can embarrass him into not hiking the price up too much
Top

The guys over there are very helpful in tracking and tracing the provenance of Gretsch instruments and they're a super nice bunch.
:o)
----
'95 JDMJMCS Blue Sparkle w/ McNelly 46/58's.
other non-offsets.
Top 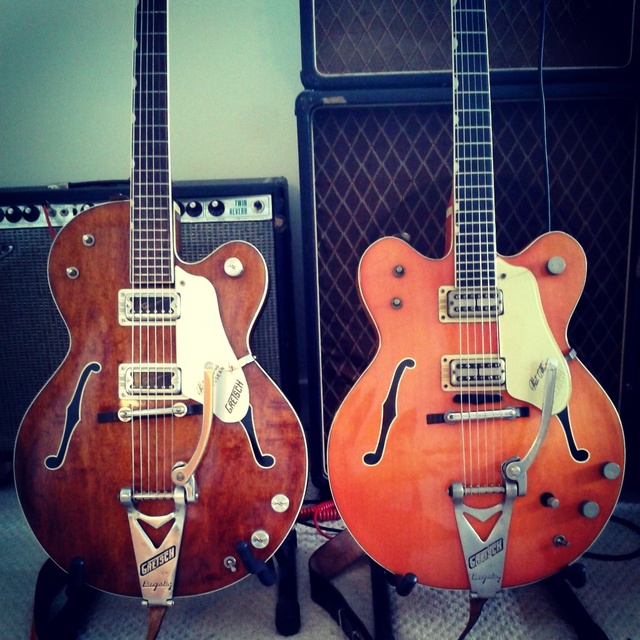 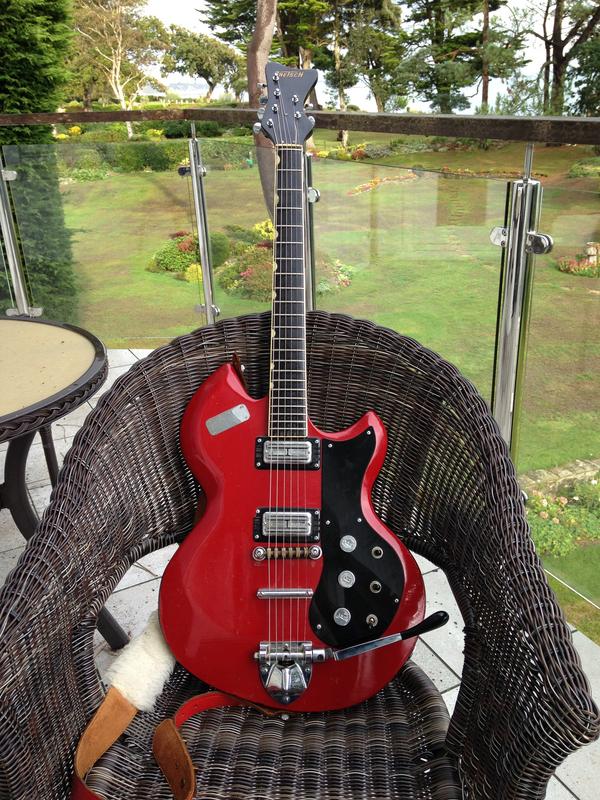 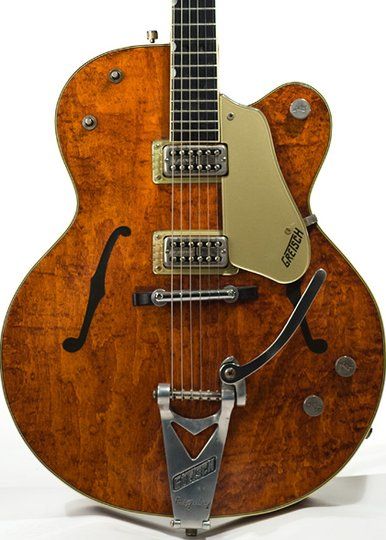 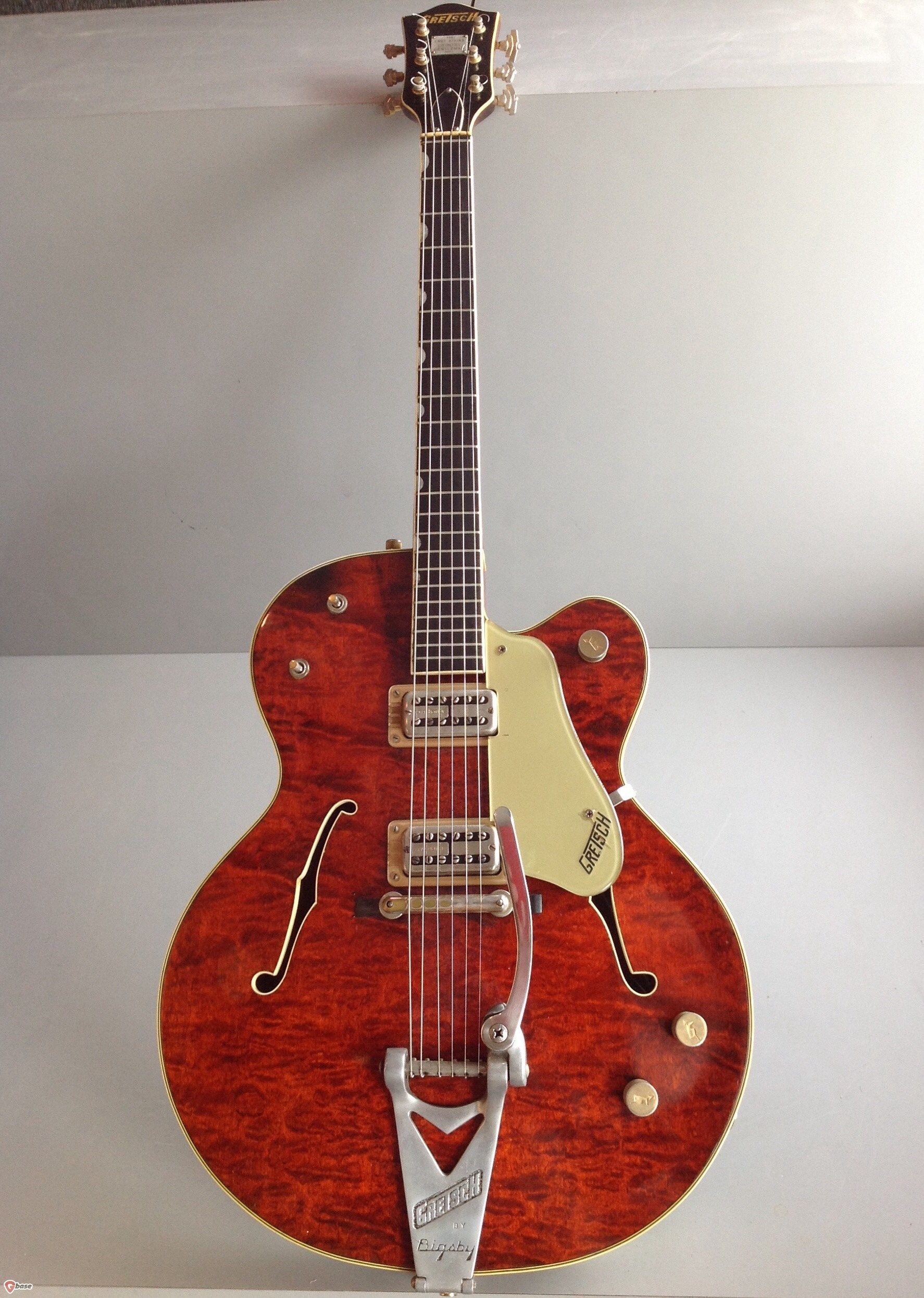