Anyone own a Rickenbacker?

For guitars of the straight waisted variety (or reverse offset).
Post Reply
104 posts

Just watched Pete Hook's band run through a set of Joy Division songs with all guitar parts played on a 330. Nice.
Top 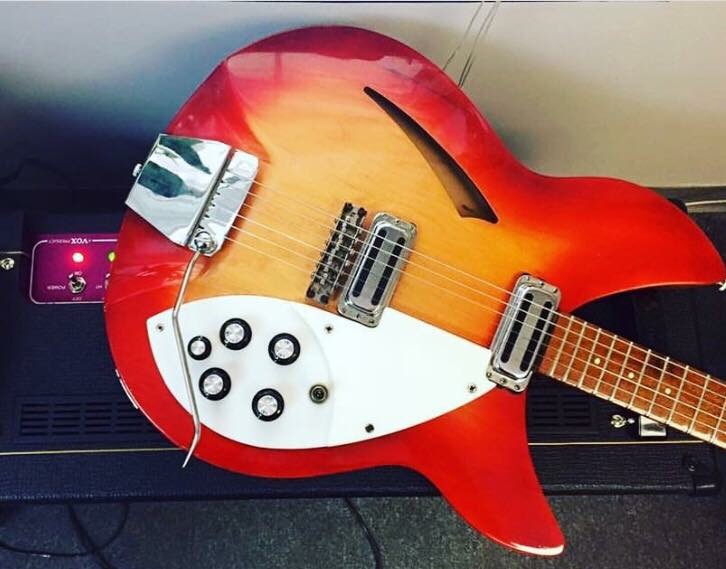 I have a Jet-Glo 330 and I love it. I don't find it any less versatile than any other guitar I have had. (and I've had a lot). It can sound really aggressive or it can sound really clear depending on what you are doing with your amp and pedals. I think its great especially for rhythm guitar its pretty effortless to play.
Guy Piccotto used one in Fugazi through a Marshall or Park 1/2 stack and I love the way that sounds, it has a nice full sound clean. I think putting flats on it sort of takes off a bit of the high end and gets it more into the ballpark that i like tone wise.
Top

I have a 2018 360-6 in Mapleglo. I bought it brand new. It's wonderful! The nut width is 42mm, which is the same as my JM, Jag and Strat. Very comfy neck. Sounds great (and different from the Fenders), plays great, looks awesome (love those full-size shark inlays). What's not to love? 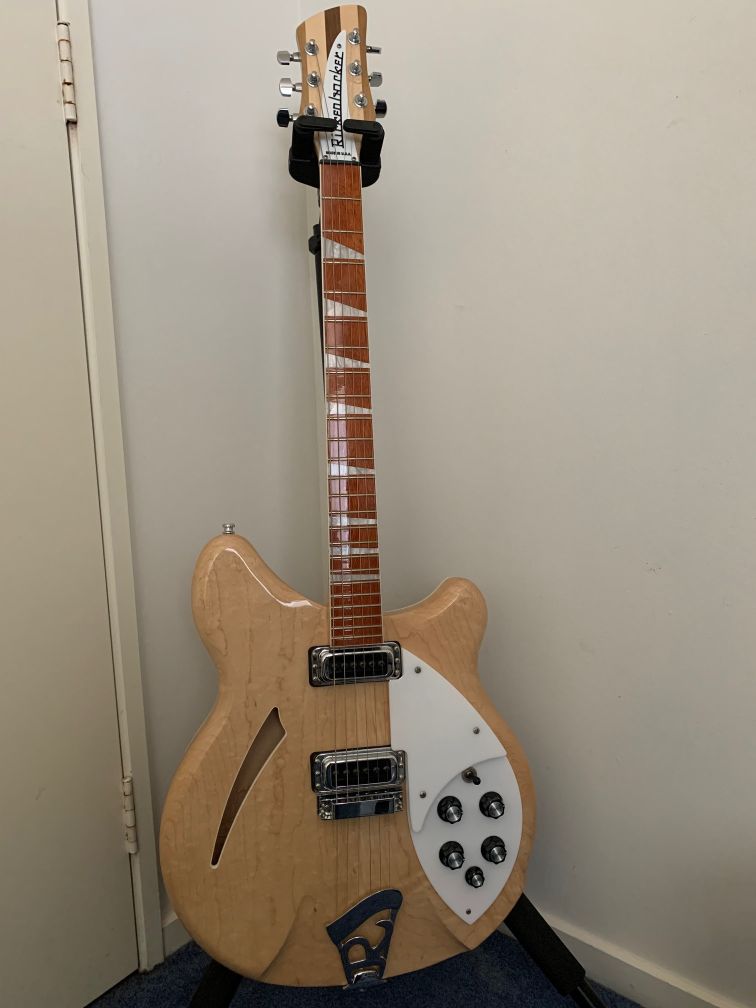 Showing me all these beautiful guitars is sooo going to cost me! The key thing above is that it can do different things to a Jaguar and JM. At the minute, I've got these and a Gretsch.
Top

My Fireglo 360V64 (a 1990's version, looks more like a 330, but with toasters) is my favorite guitar. It took me a while to get it set up right--the nut slots were cut WAYYYY too high when I got it, I don't know how anyone played it before me (and I don't think they did, because it looked brand new when I got it in the mid-2000's). But once I did, and once I connected to the guitar (small frets and lacquered board, etc), it just CLICKED--and through an AC15 it is a REAL SOUND. Everything else sounds two dimensional. And people always come up to me and say "man, that is a beautiful guitar!"

I love the Weller sound (which I think on Setting Sons was through a Peavey Bandit), and Jim Babjak of the Smithereens (through a Marshall live, although I think a lot of those big records he was actually playing a Tele). And Peter Buck--oh man, what a sound on those early records. It doesn't work for EVERYTHING--it don't shred (BTW, neither do I), and sustain is meh--but there is so much there. I need to try a Mastery...

Bottom line--it is worth the investment.
remember / to kick it over
Top

My little corner of the Rickenbacker world.

I was so close this time, but I will have to wait until the dollar gets better.

As much as I love Rickenbacker guitars, I am not paying near 3K for a 330. Friggin economy.
Det er mig der holder traeerne sammen.
Top

Dammit, I want a Rick so bad and this thread isn't helping!

Always dug how they sounded on The Smithereens' records. Nostalgia in aural form.
Top

Well shit, this must have pushed me over the edge but I went and ordered a new 360 in Fireglo!

Heard that the new batch is coming in early July, so I might get it in the next couple months, lol. Excited!
Top

I've owned a couple of Ricks until now. But only had one at a time. I think they are great guitars and often overlooked. Once you start digging in all of the possibilities that they give you, you'll learn to love them.

However, moral of the story: I love Ricks and I really would suggest you try one as soon as you can. They're fantastic guitars!
Current offsets: Fender Jaguar 65 AVRI IceBlueMetallic & Fender Jazzmaster LTD w/ Rosewood Neck Shell Pink.
Top

Heard that the new batch is coming in early July, so I might get it in the next couple months, lol. Excited!

I got my first RIC, a Jetglo 360/6, late last year after selling a bunch of gear, including a vintage Fender lap steel to fund to purchase. I felt at the time like I was driving off a cliff because I had sacrificed a lot to get it and didn’t have much real-life experience with a RIC. You read forum posts where everyone says “the necks are awful, they have finished fretboards, one-trick pony, yada yada yada...”

Anyway, I’m happy to say that after 8 or 9 months of using the 360 as my #1 axe, I have no regrets and couldn’t be happier. I’d say it is much more versatile than most people give RICs credit for and it plays like an absolute dream. The sound IS unique but I appreciate it and, most importantly, every time I pick it up I’m inspired to write something new.

I read a post in this thread where someone said it’s like a guitar from “the same ecosystem as a Jazzmaster, only from another continent.” Very apt description! My style invokes a lot of open string drones and unusual layered chord voicings underneath chimey, arpeggiated leads and I’ve yet to find a guitar that can do that better than a Rickenbacker (but a Jazzmaster is really close).

If more traditional rock is your thing, fear not, the 360 has a really punchy quality under gain that makes it tear through the mix. I think the 100% maple construction contributes to the snappiness. There’s nothing more satisfying than hitting an A7 really hard through a cranked Vox AC30 on this thing. Banging out power chords somehow reverberates through your whole body, it’s a feeling thing.

On the down side, I will concede that it’s not the best guitar I have for playing solos. The frets are small/short so bending will feel a little harder than you think it should. I occasionally “drop” strings trying to bend because the small frets (bolstered by the finished fretboard) don’t give you the same amount leverage to grip the strings during bends as you’d get on, say, a Fender with jumbo frets.

The RIC is like the coolest looking guitar, and they’re pretty rare out in the wild so I’ve learned to live with the shortcomings for live performances. In the studio I’ll grab a Strat to track guitar solos.
Top

I used to own a 1999 Rickenbacker 370/12 Mapleglo, one that was featured on the official Rickenbacker instagram before they purged that page. Easily the most beautiful guitar I've ever owned, instantly recognisable in terms of sound and looks. 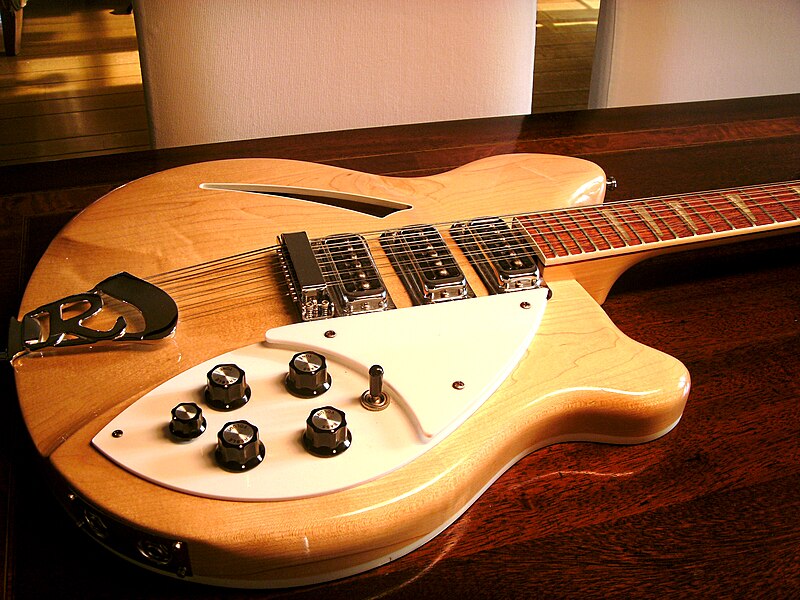 But with my long slender fingers, it was really hard to play in the lower positions, due to the narrow neck. Also in terms of workmanship and attention to detail (crooked tuners, minor finish flaws, shoddy workmanship underneath the pickguard) it did not live up to the price those guitars fetched, not even on the 2nd hand market. This was also the John "snobbery" Hall era, so the brand also suffered from a rather poor reputation of exclusivity and "if you don't like it, suck it up". Nowadays under the new leadership they appear to be more customer-oriented, which is a good thing. Still horrendously expensive though.

I have a Jetglo 330-12 from the '90s that's had its original hi-gain pickups replaced with toaster tops. I keep flatwounds on it.

It does "the thing" well enough for me when I need "the thing." But I think the 360s are just a little prettier-looking.

My favorite thing is to use it in contexts where people normally don't use 12 string electric guitars. There is a lot of uncharted territory with the electric 12 string
Top
Post Reply
104 posts