For guitars of the straight waisted variety (or reverse offset).
Post Reply
22 posts

well, it is half of a flying V

I assume you're looking for the original plans, so you can destroy them and save the world from this monstrosity, right?

tribi9 wrote: ↑
Sun Aug 23, 2020 6:33 pm
I assume you're looking for the original plans, so you can destroy them and save the world from this monstrosity, right?

It was originally an April Fool's joke in a guitar magazine. Did Gibson ever actually make any?
Det er mig der holder træerne sammen.
Every aspect of life is a two-sided coin. No matter how you flip it.
Top

tribi9 wrote: ↑
Sun Aug 23, 2020 6:33 pm
I assume you're looking for the original plans, so you can destroy them and save the world from this monstrosity, right?

It was originally an April Fool's joke in a guitar magazine. Did Gibson ever actually make any?

I've stumbled into this article that has some insight about it:
https://www.accordo.it/article/viewPub/72143

I did read an article in a guitar magazine about the the thunderbolt when Gibson released it , referring back to their parody Thunderbolt.

Gibson released the model as part of their Guitar of the month series which was probably more than 10 years ago now.

The series also included the Holey V and the reverse V as well the multicoloured layered wood SG and LPs.

It was a surprisingly light-hearted range of guitars from the company which was being criticised for poor quality at the time.

In fact it probably led to the Explorer-X model

"I don't know why we asked him to join the band 'cause the rest of us don't like country music all that much; we just like Graham Lee."
David McComb, 1987.
Top

You joke, but this was originally posted in the vintage offset section.

Det er mig der holder træerne sammen.
Every aspect of life is a two-sided coin. No matter how you flip it.
Top

Someone will need to tell Trogly about this!
Seas, Starry : Instrumental / fuzz / psych. Find us on Spotify, Bandcamp, itunes...
Top

We all laugh, but one of Adam Clayton's millions of signature basses was a less extreme version of this. https://www.premierguitar.com/articles/ ... ss_Strings
Top

burpgun wrote: ↑
Tue Aug 25, 2020 4:54 am
We all laugh, but one of Adam Clayton's millions of signature basses was a less extreme version of this. https://www.premierguitar.com/articles/ ... ss_Strings

I happen to know A LOT about this model, actually!

First, Gibson DID NOT release this as a "Guitar of the Month" or any such thing. There were only two made by Gibson CS, one in Korina, and one in Cherry Trans, both for a Hawaiian dealer.

The first "Thunderbolt" was the one faked-up/invented for the UK magazine's April Fool's issue (I actually bought that issue off a newsstand because of the Teenage Fanclub cover). That guitar received a lot of attention, and ended up getting loaned to Rick Nielsen of Cheap Trick, who took it out on tour briefly. He sent it to the Hamer shop where two exact replicas were made -one prototype and one finished one in SG Cherry over Mahogany. I have spoken to the two Hamer artists who built that guitar and speak to one weekly, as he is a close friend. Rick selected the Cherry version and then took the Hamer out on tour and returned the original to its owner. The Hamer played and owned by Rick has a Hamer logo and a 1995 Serial Number stamp - I've played and inspected that guitar.

In 1996-97, while touring Japan, both Fernandes and Hiroshigi Kid made versions of Rick's Thunderbolt. The H. Kids one was a limited production in Korina, and there are probably only a couple built - I've only seen two ever. Fernandes built one as well, also in Korina, but with a stubby, more LP-shaped pickguard and rounded upper horn that never looked right to me. Rick toured with one of those for a while, and I've seen another one for sale in Japan on a dealer site back in the late '90s.

In the fall of 2000-01, my brother, myself and another individual commissioned three Thunderbolts in Honduras Mahogany from the Hamer guys who built Rick's guitar (single piece Honduras mahogany bodies), and were built identically and using the same template as the original, and were built in the Hamer New Hartford shop on weekends. At the time, Jol Dantzig would not officially acknowledge building this model, despite the log book entry and conversations I had with Rick as well as the builders about it (Jol was actually on the West Coast involved in his own design project at the time that guitar was built, so wouldn't have been in the shop anyway). Two of the three guitars were completed - my brother has one in Trans Cherry with Nickel hardware and I have one in a Cherry Red Miniflake with gold hardware. The third one is still unfinished. 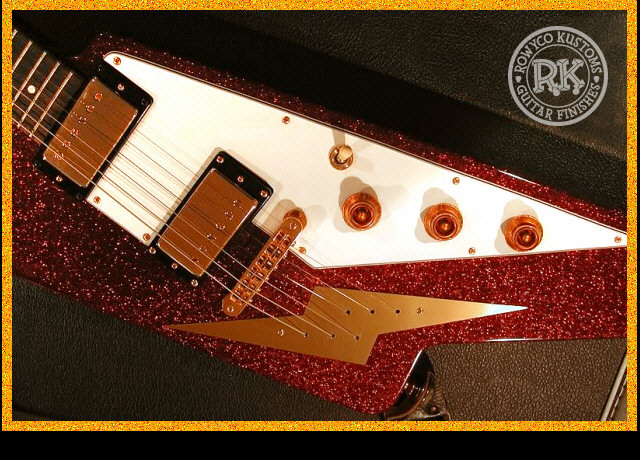 In 1999-2000, Gibson built the Cherry and Korina Custom Shop guitars. I wasn't at the Winter NAMM show in 2000, but understand that one of them was displayed at the GIbson booth upstairs for a short while. They didn't really get the shape right, as the upper wing is a bit too thin and sharp for my liking.

In 2011-12, shortly before FMIC shut down the Hamer shop, they built one for a friend of mine who is a huge Hamer collector. It was featured in the Workshop Blog as well: https://hamerworkshop.wordpress.com/ They got it pretty close, but the upper wing is slightly thicker than the originals.

These guitars are nice and light, and despite the polarizing look, balance perfectly on a strap - the position actually pulls the guitar in a couple frets from where a normal guitar hangs. Not a guitar you'll play sitting down, but that's certainly not the point!

Again, you either love these or hate them. I love 'em, and there are not many more than a dozen out there, if not only a dozen that I can account for over the last few decades.
Top

I feel like it's one of the "unobtainium" guitars. And you got Stike to paint it? SICK!

I feel like the original poster - I guess I couldn't imagine it would be tooooo hard to either cut a V in half, glue it and then just put a gnarly paint job on it - but I see what you mean about the angles being "right"- so getting a body made specifically would probably be easier. If you can find a dead on shot you can blow it up and trace it - will be close.....pretty close anyway.

The top and bottom of the wings are actually parallel right? There's probably some magic math that has to occur (or some kind of voodoo).

Would love to see more pics of your red sparkle 'bolt.
Twang, Reverb, and Echo - it's where it's AT!
Top

I can't upload directly here and all my thousands of pics that were stored with Photobucket are inaccessible since that place took a huge dump! I'll see if I can get some posted somehow...
Top
Post Reply
22 posts