For guitars of the straight waisted variety (or reverse offset).
Post Reply
22 posts

I was the founding editor of The Guitar Magazine. With Dave Burrluck (reviews editor) and Richard Chapman (our vintage writer), I designed that guitar. I think it was my idea to flip half of the V, it might have been Dave's as we sketched it out so quickly between us, RIchard came up with the name and wrote the story. The original was a mockup, unplayable, from bits, made by Tim de Whalley, who came up with all the detailing. The neck was roughly nailed or screwed on for the photo shoot although the pickups etc were vintage. We paid him extra for all the work but it was mostly a labour of love, which we planned months in advance. the story written by Richard, with a sidebar by Dave, was plausible, then got increasingly ludicrous - and we made sure the copy ran so that the auction date for the guitar of 1 April was clear.

Andre Duchossoir read the article (somene sent him a fax) and didn't realise it was an April Fools joke, so it made it to his book. Then, following the book, someone in the US faked a version, in korina, with all the checking, PAF pickups etc. It was either feautred or was due to feature in a prestigious Vintage Guitar calendar.

We heard about the fake because our writer Cliff Jones bumped into Nielsen's roadie, i think at an Elvis Presley Festival in Memphis, who boasted how Rick had just bought a guitar that was 'rarer than rocking horse shit'. When CLiff told them there was no such guitar and we'd made it up he started getting really angry. The fake, in korina, was brilliantly made apparently, checking was convincing, even the solder joints looked perfect. We were all shocked as a lot of vintage gurus who knew more than us were telling us it was real. Andre of course realised his mistake... we exchanged faxes, I felt very apologetic, as he's a great researcher but andre didn't really know about the concept of an april fool, especially one where folks went to such trouble!.

RIck got his money back I believe, but I don't know the full story. I would love to see photos of the korina example - someone must have then, somewhere, I think RIck might have told different versions as obviously it was embarrassing, or else the subject of lawsuits etc. However, there was a clear paper trail that someone had made a fake and that rick had either bought it or had it on approval. Dave Burrluck, who's now with Guitarist, did write a feautre with follow-up details. He was at the NAMM show where Gibson showed a version - and they had no idea of how the 'original' was made.

Hamer were never involved at any point, nor was anyone else in the US in building that first example, nor did Hamer ever contact us, I guess they simply built Rick some examples based on the fake. I don't know where Tim de Whalley is these days, unfortunately.

So happy to hear someone hear bought that issue! I have kept a set of nearly all the original 24 but annoyingly that one is missing - however, I just bought one on eBay and will post the article here when it arrives. I meet Dave every year or three and we chuckle about how that story has endured.
Last edited by Paul-T on Sat Dec 19, 2020 1:28 am, edited 7 times in total.
"classic marked down to 20 pence bargain bin fodder'
Top

I can probably provide some hosting space on one of my websites for pics.

Digging this thread!
Twang, Reverb, and Echo - it's where it's AT!
Top

Hamer built the guitar in 1995 that Rick toured with (and recorded most of the 1997 S/T "Red Ant" album with). I am close personal friends with the guy at Hamer who was tasked with building Rick's - They were loaned one from Rick, that I assumed was the magazine mock-up, but apparently was yet another build that hasn't surfaced. My understanding is that that one was also an SG-style Cherry trans over mahogany, not Korina, which is why I assumed Hamer had seen the magazine guitar. Measurements were taken, templates made, and a Korina and Mahogany version were built. Mine (and the other two built in the Hamer shop back in the late '90s) were made out of one-piece Honduras Mahogany boards and with the original templates. The lightning-bolt shape tailpieces were also cut from the same jig as the Hamer version.

I don't think anybody has said anywhere that Hamer came up with the idea nor that they built the magazine guitar. I've talked with Rick about it a few times, twice while actually looking over his guitar. He rarely tells the same story twice, so I figured that my many conversations with the guy who actually built the Hamer version is all the proof I need as to the story behind the copies of the DeWhalley mock-up.
Top

Regardless of the provenance, I would dig more pics.

Having guitars that have a story behind them make them eminently more interesting!
Twang, Reverb, and Echo - it's where it's AT!
Top

This is my brother's - built by the guy at Hamer who built Nielsen's, and using the same templates: 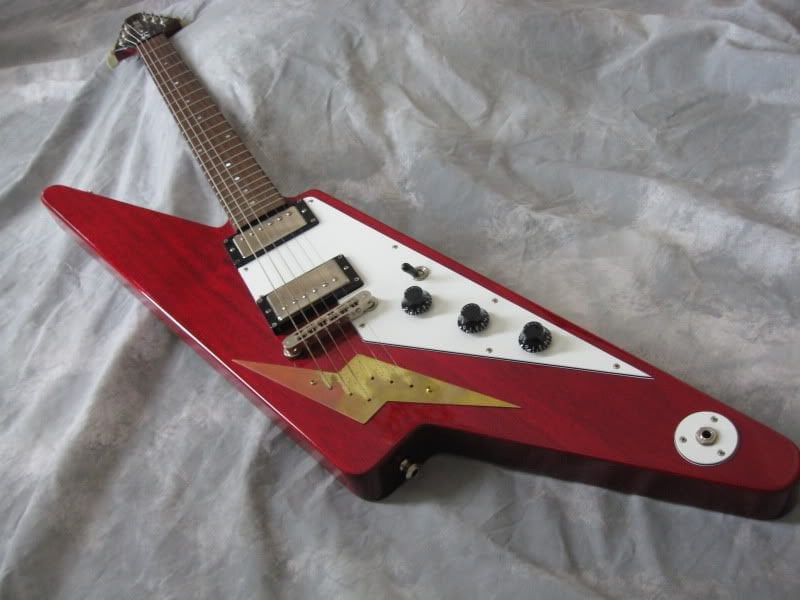 Diiiiiig. Killer!!
Twang, Reverb, and Echo - it's where it's AT!
Top
Post Reply
22 posts