by Flurko
Hi everyone !
I thought I'd make a NGD thread about my last acquisition (well, Christmas present, but..).
Some time ago an old acquaintance of mine, a very good guitar player but more interested in metal/shred and what have you got into 8-strings. He bought an Harley Benton, liked it, and later bought an higher-end Agile 8-string for his band.
I asked him and he agreed to sell me the Harley Benton, upgraded with the Agile's original pickups (which he replaced with EMG -metal guy, remember-).
I wanted to try an 8-string for a long time. I'm not interested at all in most kinds of metal, but I like weird guitars so I had to get that thing. The looks are really not my cup of tea, as my main guitar is still my trusty old Jazzmaster, and I think most people here will agree with me on the aesthetics qualities (and lack thereof) of this guitar.
Enough talk, here are the pics : And side by side with my FakePaul for scale : Some quick words about the sounds, since it's supposed to be a musical instrument :
The pickups (Agile Cepheus, as it seems) are set really low and I like it that ways, as the output is more coherent with my other, single-coil equipped guitars. I can't tell about the distorted sounds, as I only ran it for now in my Vox AC4TV, not really a metal amp. It's quite balanced from one string to another (in standard tuning, with low B and F#), i like the metallic sounds of the lower strings, reminds me of the bass sounds of Young Marble Giants, which I've been playing recently, or some Shellac reminiscences.

That's a wrap for now, I'm a proud owner for now, but I might have to do something to make it look less metal, one day !

I love my S8, it was my solution to the "metal aesthetics" issue.

It has nice stock pups, and isn't quite so blatantly metal that I feel weird playing other genres with it.

by 017493816
Also, the metallic sound you describe comes from having lower strings that are too light or dead. Just so ya know.

by Flurko
Yes, I was aware of this for the metallic sound, but the tension feels mostly right. It also comes from the new strings, I'll see how it evolves with time.
Re- the aesthetics, the first thing I did was to remove the stupid truss rod cover (who writes "Rock" on a guitar ?) and replace it with a custom one made from a show ticket. Not perfect, but that'll do for now (and I wasn't aware that the guitar had two truss-rods, good to know!).

by Stereordinary
I just recently finished my first eight-string and I'm super pumped on it. I'm a tall guy with big hands and long fingers, so making the adjustment isn't too difficult for me. So far I really like playing it.

I've very rarely played this guitar, mostly because I don't play metal and the string tension always felt weird. I put some stickers on it because I didn't want to ruin my nicer guitars, but maybe I'll take them off, they look pretty silly.

Really good news though : I stumbled upon the Ernie Ball 9-string set (thomann link but my local music store could order them for me for a slightly lower price).

The biggest string in this set is a 105, but with a guitar-sized ball end, which allows a stable Bass VI E-E tuning on this 26" guitar (plus two top strings) ! I will buy another set like this one of these days and try it on a standard scale guitar (probably my fake hollow PRS), to see how low I can get on a neck that isn't stupidly wide like this one !

The half P-style pickup in the neck position is just here for testing, the neck humbucker wasn't sounding really great here. Work in progress ! 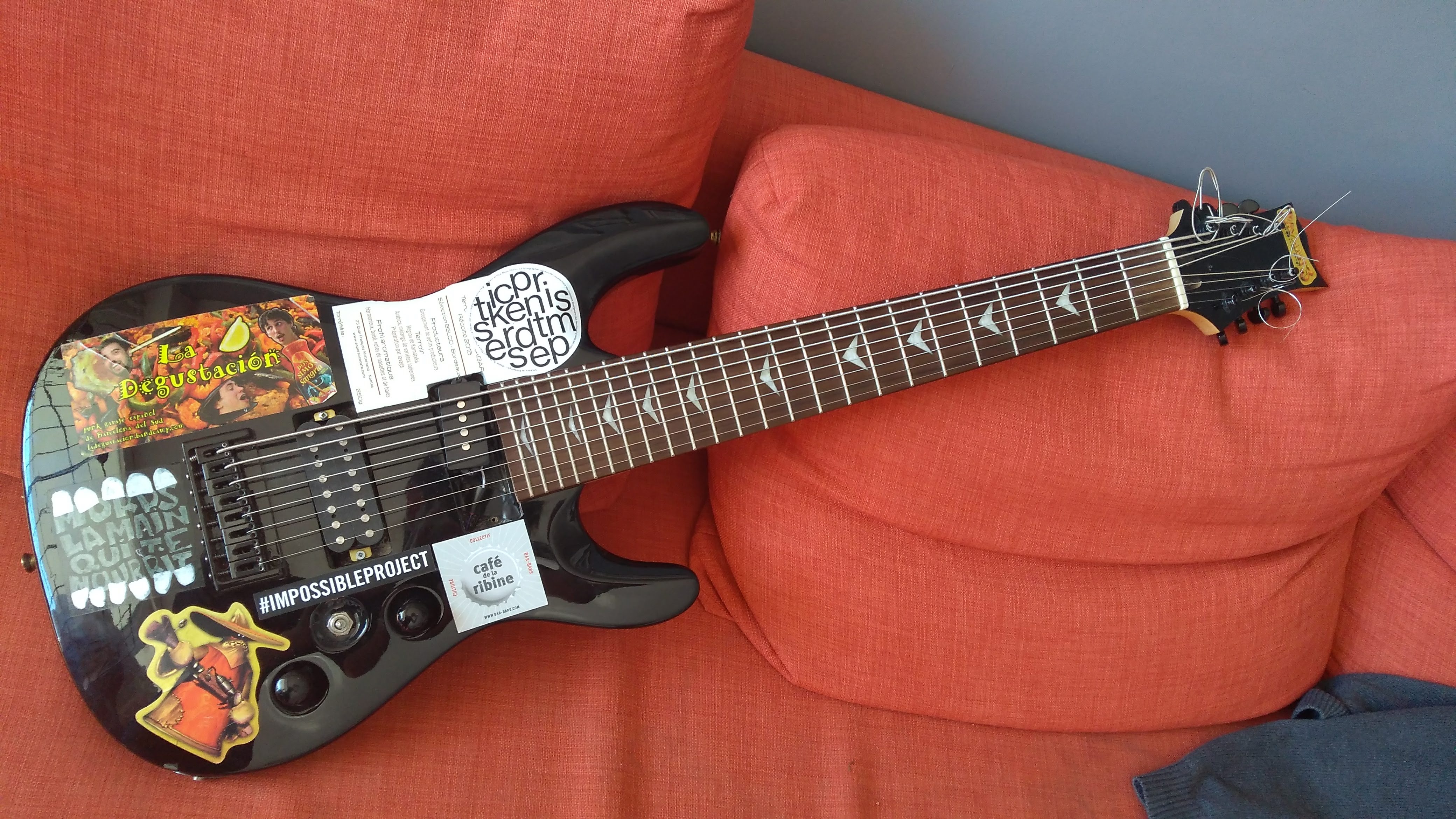 by burpgun
Personally, I love the idea of trying to work a guitar like this into a non-metal context. But one question: Is it hard to use something like this in a project that also has bass? Seems like the frequencies would be awfully crowded down there. I only do recording, but even there, getting a Bass VI and a normal bass to balance can be tricky.

burpgun wrote: ↑
Mon Sep 28, 2020 5:49 am
Personally, I love the idea of trying to work a guitar like this into a non-metal context. But one question: Is it hard to use something like this in a project that also has bass? Seems like the frequencies would be awfully crowded down there. I only do recording, but even there, getting a Bass VI and a normal bass to balance can be tricky.

I've yet to try it in a band context with another bass instrument. I just joined a project as a "bass-person", and given how playing bass hurts my back and my shoulder I'll maybe bring this instrument along if I don't have too many weird looks !

I need to sort out the wiring, I have an annoying hum/noise problem, If anyone can tell me why, I've put a small sound sample here : https://soundcloud.com/mieuxdecorrosion ... -tone-test (with guitar rig amp sim).

I thought everything was grounded properly, the wiring is pretty simple but I might have made some mistakes !
All times are UTC-08:00
Page 1 of 1
Powered by phpBB® Forum Software © phpBB Limited
https://www.phpbb.com/