Song of the Day Thread

Adorable - I'll Be Your Saint
Top

Was down at a local pub last night listening to one of the best young guitar players in town and his band and they started playing a song and I thought that sounds good, I think I know that song.
Top

Maria Somerville - Dreaming ghost dance swoon for the haunted ballrooms of you mind.

The Home Current - Leave Your Fears sublime synthpop. Interestingly not on Polytechnic Youth but on Castles in Space (a similarly fine place to spend money earned on your paper round).

Bourbonese Qualk - God With Us the reissue on mannequin sounds great and it's wonderful having a brand new copy. What's REALLY weird is the difference in colour between my 34 year old original and the new one. Not due to any inaccuracy in the reprodution but because the white on mine in now tan with age and the black has gone brown. Some old records end up looking quite interesting as they age, I played Coil Scatology the other week and it's white cover is sort of sunburst with age brown at the edges fading into near white in the middle like some arcane olde scrolle.

Much more pronounced in person but you get the idea. 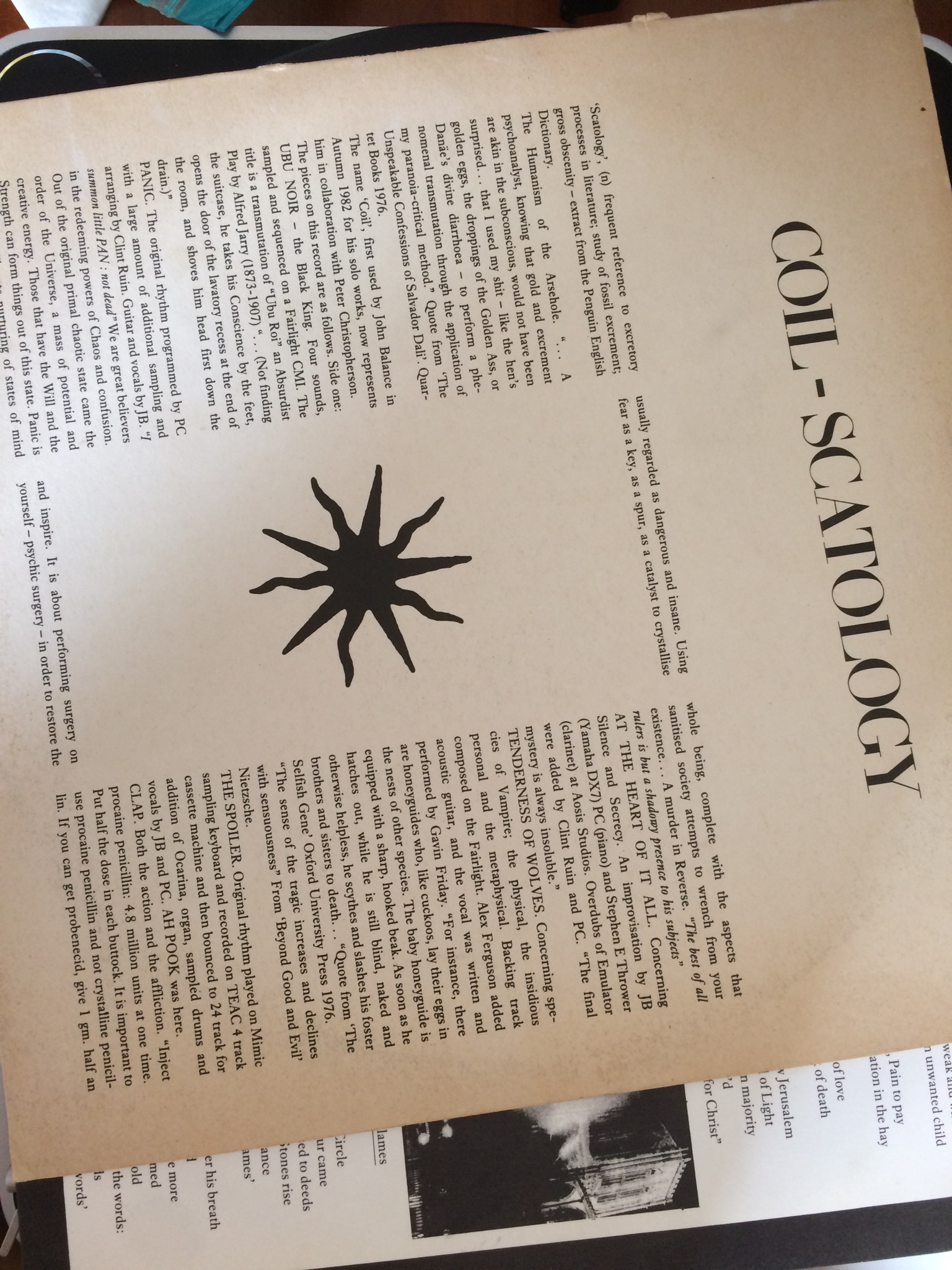 Coil - Tenderness of Wolves (with Gavin Friday of Virgin Prunes)

LSD and the Search for God - I Don't Care
Top

Holly Golightly & The Greenhornes - There Is An End
Top

Oliver Cherer - Weight of Water This album is ridiculously good and a must for fans of; (quoting myself from the thread on it) Durruti Column, Robert Wyatt, Maximum joy, Weekend and (YMG), Radio Dept., Once, mid 80's Eyeless in Gaza, Deux Filles, Furniture, Tracey Thorn's A Distant Shore (which was the first thing I ever played on guitar), Solo Ben Watt, Brian Eno (AGW), Felt (and Maurice Deebank ), Cherry Red.

Oliver Cherer - Sinners of the World

Oliver Cherer - Untitled 1983 I feel like I've owned this album most of my life.

Werkbund ‎- Perl Weiss I wasn't cool enough to buy the original double seven, this is a reissue (sold out mostly) of but I'm glad I'm cool enough to buy this slice of maudlin kosmische intropection which sits at the nexus between Coil, Klaus Schulze and the emptiest ut son Chain Reaction.

Stano - Seance Of A Kondalike What a find! I had no clue Stano existed and this Irish artist is IMO a major find. This came out in 1983 and I have to wonder where it's been all my life. I was drawn to it by it's dreadful sleeve.

Stano - A Dead Rose like Popul Vuh crossed with Virgin Prunes. Features Michael O'Shea who I did a thread on that no one posted a reply in (as usual).

Patience － Voices In The Sand Roxanne from OSG favourites Veronica Falls goes the full synthpop on a fantastic wee elpee on Night School my end of Glasgow's premier record label. Contains her three long sold out seven 'a' sides. Kinda like a synthpop Cocteau Twins

Patience - Girls are Chewing Gum the first feel good song of the summer. Picked this as a single before I think.

Patience - White of an Eye OK it's been through Chris & Cosey's and New Orders bins like a bin bag rippign urban fox but I like urban foxes.

Warm Drag - Cave Crawl I bought this ages ago but a child stole it off the mat like a blue tit after the cream on top of your milk and I only realised it the other day. It's a stray Oh See with a female singer and runs the gauntlet from Suicide to the Cramps to the Stooges to King Tubby to Blues Explosion to Stooges to the Kills to Gallon Drunk to JAMC

Love this and the Michael O'Shea record. Heard a Dead Rose a while back on Carla del Forno's NTS show..and forgot to get it as I was skint.

Thanks for the reminder.
Have you heard Stephan Micus?
Stephan Micus - Borkenkind
He plays a domestic Bavarian Zither among other more exotic instruments. IMO a truly masterful multi-instrumentalist, without ever overly self-indulgent or verging on cringey tropes, his later records are a bit mellower though.
The singing throughout the Implosions album keeps reminding me of the ending to Batwings (a Limnal Hymn).

I'll have to catch up on the rest, but found the Werkbund, Samuel Kerridge&Taylor Burch and Body Without Organs to be great , honestly I thought I was onto Suns of Arqa when I saw the sleeve of the latter.
Philippe Laurent - RapideAnother very welcome reissue on Platform23/Mannequin. Daft as fuck and so much fun.
Topo - Ba Ba Go, Go
Plastix - Konsumier Mich
Top

Really enjoying the Viagra Boys album Street Worms past few days.... seeing them & Fat White Family on Saturday at All Points East, should be a good one...

Just heard this song by the Sacred Paws. I haven’t investigated further, but I really like it.
Top

Feel - Ty Segall
You think you can't, you wish you could, I know you can, I wish you would. Slip inside this house as you pass by.
Top

HELEN (not the Grouper spin off but klassik italo) - Witch my copy has always had a massive pop on the cusp of the first chorus so when I saw Dark Entries had re-issued this I jumped on it. Massive electro disko romanticism that almost on on the cusp of neo classical.

FKA Twigs - Cellophane ordinarily I struggle with getting all the way through any pop video but this is way above average with stunning danse moves and to be honest I'd have like more dancing and I'm docking points for the second half of the video due to substandard chimeric angel thingy and less dancing. Good tune if not quite at the level of EP1/2

This is just a glorious sound.

The classic Shadow hits are some of the best produced recordings you will ever hear.
Top

Thanks for that! I had managed to completely miss them, always nice to hear a band with a baritone singer (who looks/sounds like John Cale in his druggy 80s) and a saxophone.
Top
Post Reply
7057 posts