This is kind of a weird/fortunate story.
This was my first vintage guitar restoration, and it is full of unlikely finds and strange coincidences.

So this story started when a vintage 1964 Vox Consort neck with tuners ended up in my feed in my local (Netherlands) second hand website (marktplaats, like craigslist or gum-tree).
It was not very expensive, and I knew Vox made some very cool amps in the 60's, so 60's Vox guitars should be good too right?
So without knowing what I was going to do with it, I purchased it before it was gone.
When it arrived it looked good, but someone had it attached to a Fender style guitar, as there were two extra holes drilled into the neck.
Later on I found out that the trussrod did not work...

So at this point I had no clue what to do with it. So it laid on my closed for some time.
And at some point I began looking for some information about these guitars:
The Vox guitars were made in the UK by JMI (Jennings Musical Instruments) in the early 60's, and (correct me if I'm wrong) were later made in Italy.
They were essentially the UK equivalent of Fender. The guitars had (as far as I know) the same scale length as Fender guitars (25.5''), single coil pickups attached to a pickguard, rosewood fretboards, bolt-on necks, contoured bodies, etc. And they were selling them at roughly the same price point as Strats. And Vox even made some famous models, like the Phantom and the Mark VI and XII.
As the guitars weren't as popular as the famous Fender guitars, so they are pretty rare, especially in The Netherlands.

So finding a fitting guitar body was hard. But I managed to do it.
I started looking on Ebay and Reverb. But the only Vox body I could find was a Spitfire body for $700.
But I started looking on forums and Google and found a link on Picclickimg.com of a Vox Consort body which redirected me to Ebay.
The seller was selling it to UK buyers only, so it did not end up on my Ebay search earlier. I contacted the seller and asked if he could ship it to the Netherlands.
He replied and said he could and had some other parts too.
So I ended up buying the body and a fitting pickguard from him:

The body was 100% original, but the pickguard has two holes drilled in it for extra switches.
When it arrived, I didn't even know if it would fit, I didn't ask the seller to measure the neckpocket. (vox had a couple of different neckpockets, and the Consort has been redesigned a couple of times). But the luck was on my side, and it fitted.

But the guitar was far but finished.
I managed to find original pickguard screws and strap buttons on Ebay from the UK,
and a neckplate from the USA. All I needed now was a bridge, tremolo, pickups and electronics.
This was very hard to find.
There are some pickups on Ebay, but they have the insane Ebay prices too. ($150 for one pickup)

I found some kind of strange reissue pickups from Korea on Aliexpress for $30. So I gave it a shot.
At first they did not completely fit in the pickguard. So i sanded the sides of the covers down and they ended up fitting perfectly.
I had some 80's 250k pots and a 5 way switch laying around, so I completed the wiring.

I had an advertisement on the local second hand website for a couple of months, that I was looking for a Vox Tremolo:

There weren't many responds, someone even tried to scam me by using some old ebay pictures.

One day a 60's Phantom advertisement popped up (has the same tremolo as the Consort) , and in the description it said the tremolo was replaced with a 90's reissue, but he had the original one too. I messaged him and asked if he could sell me either one.
He replied that he could sell me the 90's one, for the originality of his own guitar.

Luckily enough for me Schaller makes roller bridges that fit the Consort guitar perfectly.
As the original bridges are extremely rare.

So I ended up with a partly original Vox Consort.
Here are some pictures: 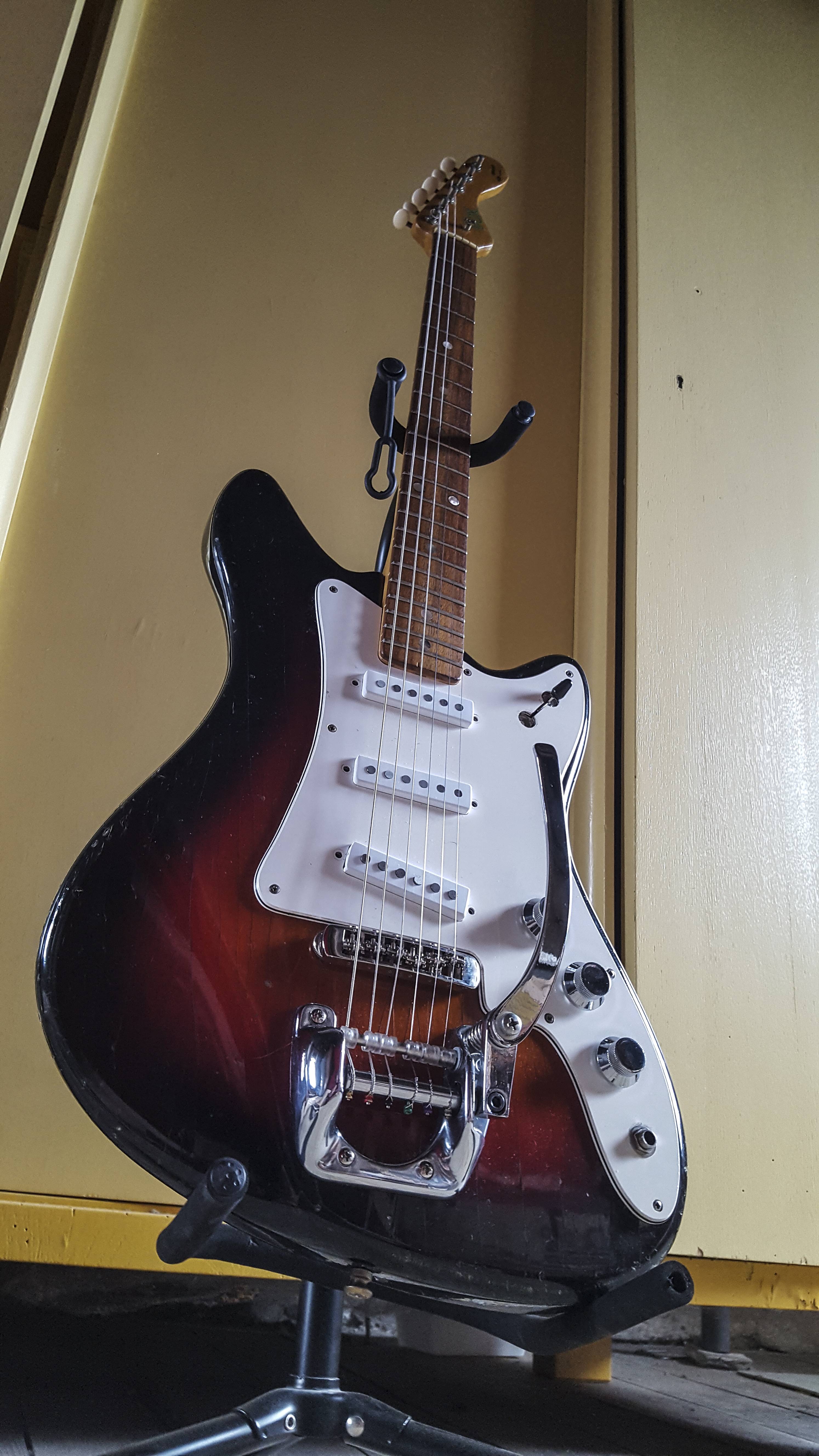 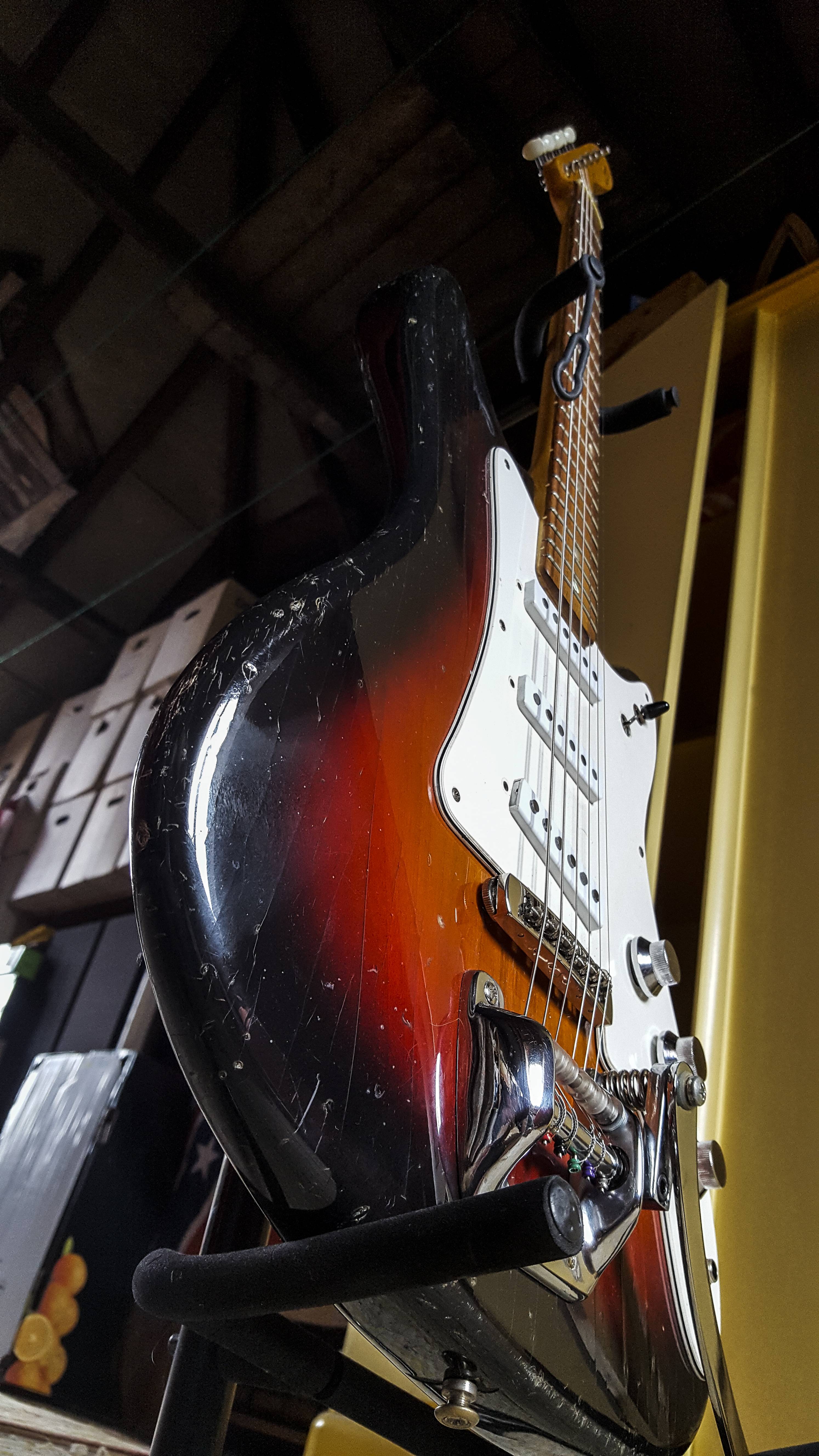 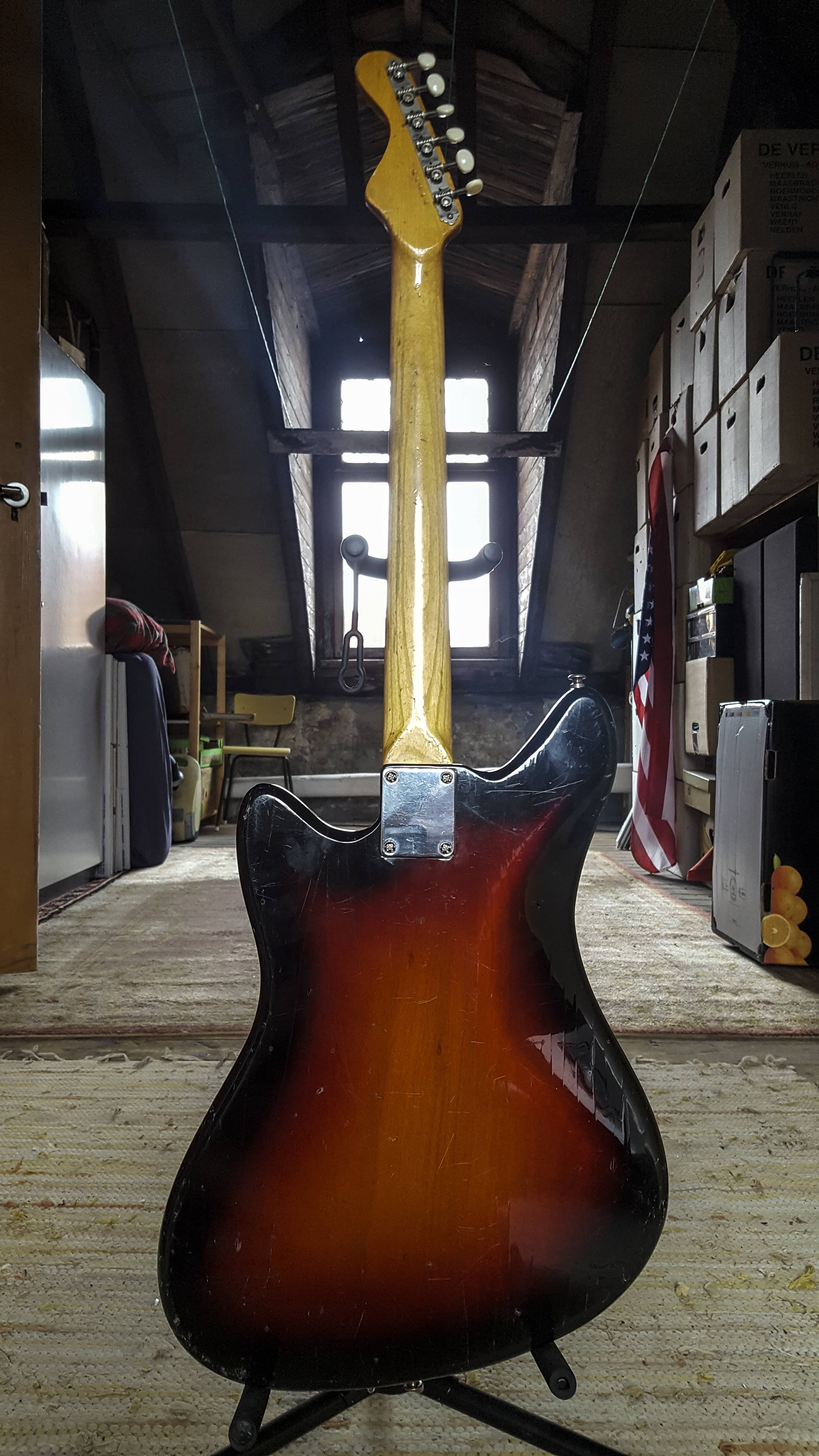 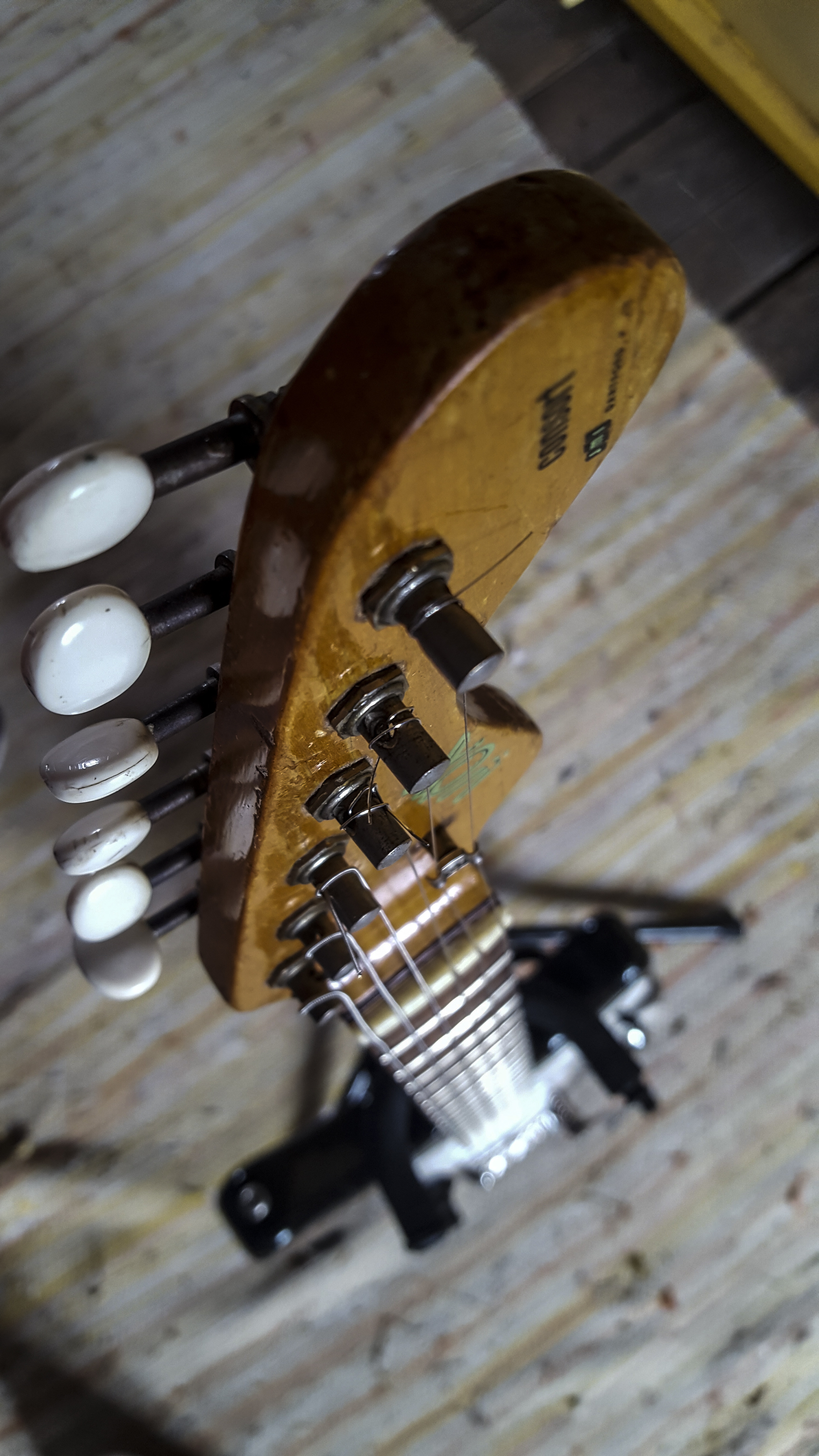 The guitar plays great! It has a really vintage feel to it.
And the tremolo is exellent, it is always in tune.
And it sounds great too, even though the electronics are non original.

But the story isn't finished yet. (sorry for the long post) 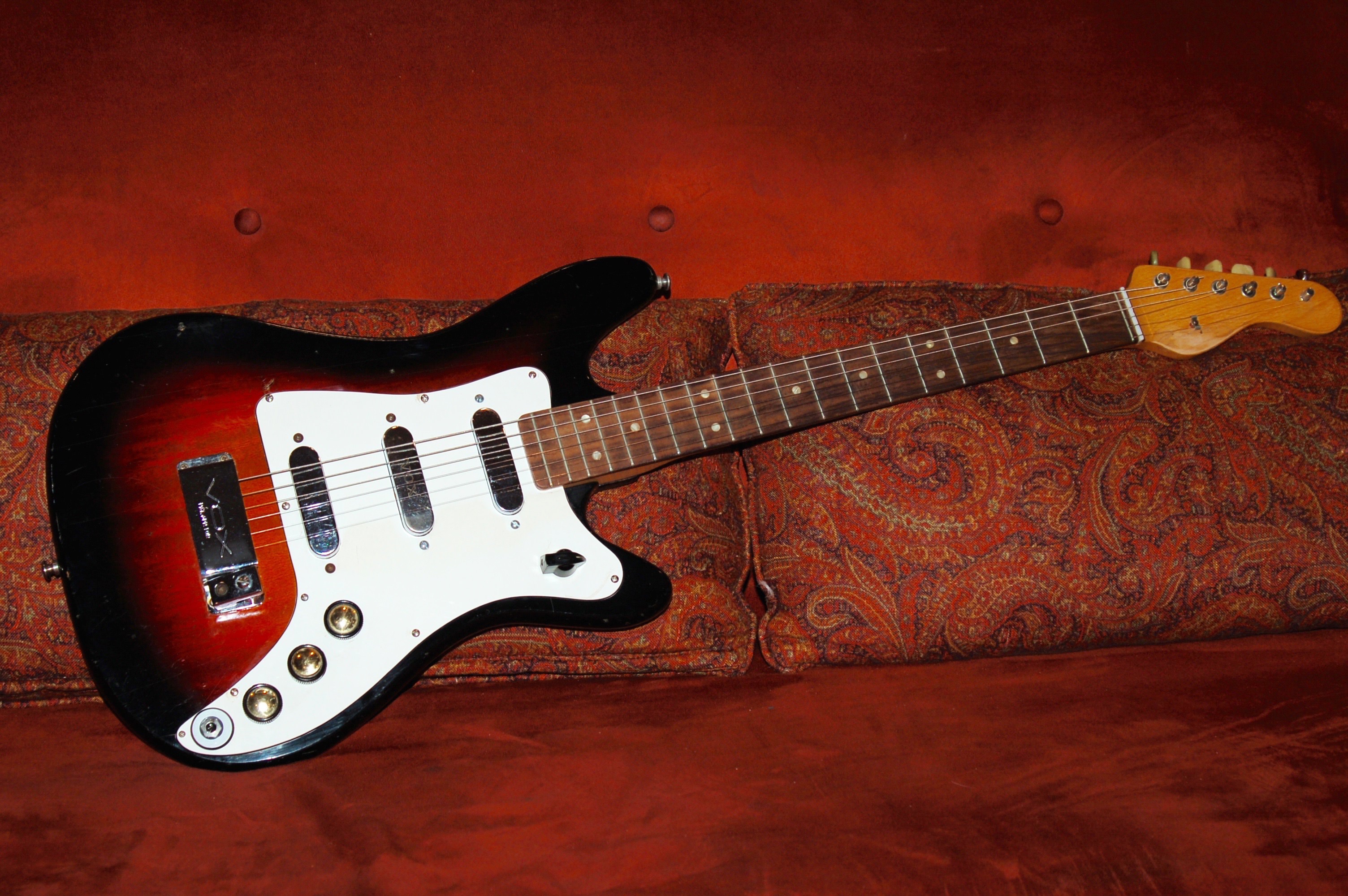 This guitar is very similar to the Consort.
So I bought it and made a custom Mint green pickguard for it, fitting the Consort.
The wiring of the Shadow guitars were a bit weird. The two knobs closest to the pickups are tone pots , and the one by the outputjack is a volume.
So that took a while of getting used to.
The pickups sound very cool. They sound like a lipstick pickup. They sound very warm. 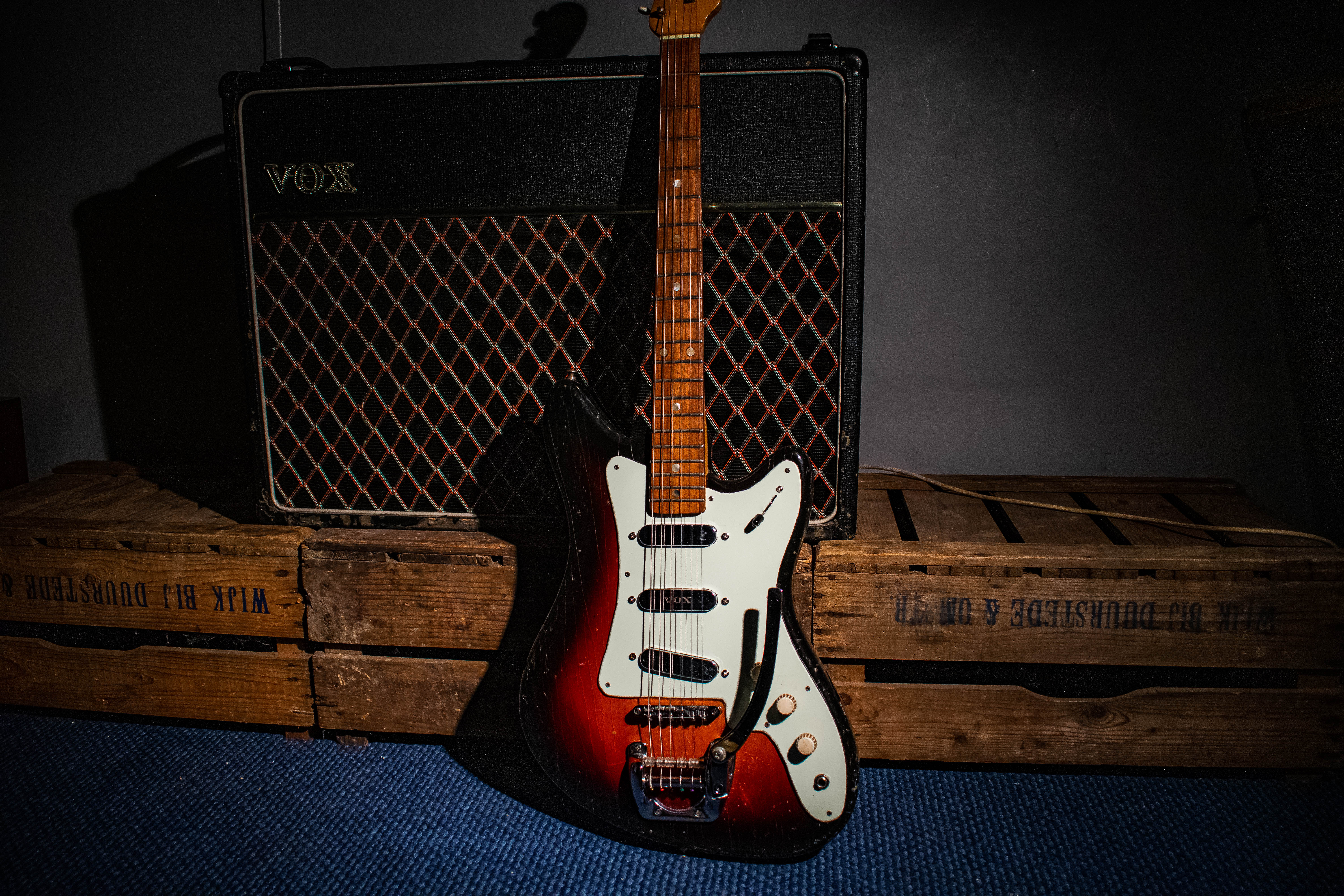 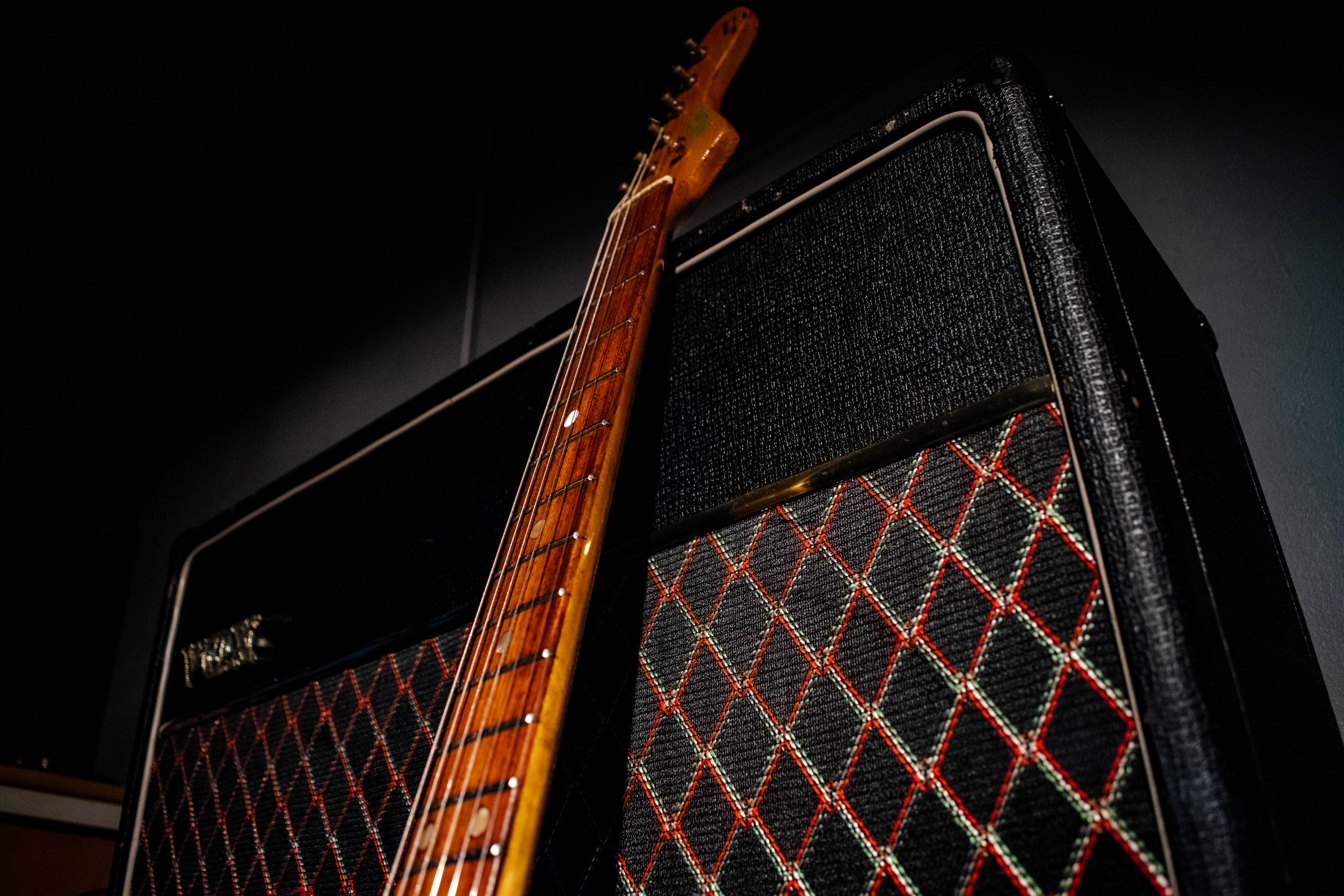 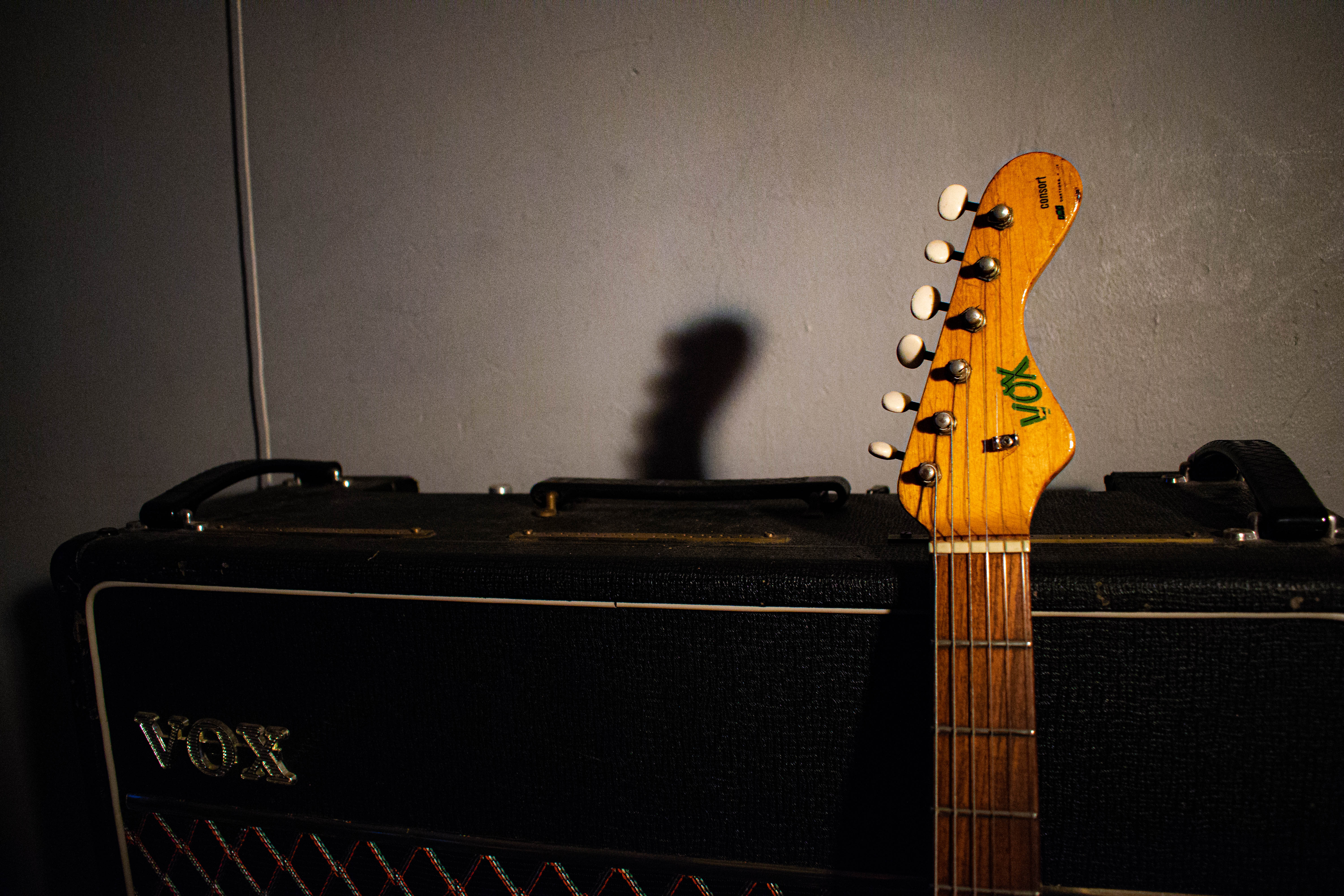 Great job, and glad you ended up with a matching body and neck!

Not sure about the Consort and Spitfire, but certainly the UK and Italian Phantoms are different scale lengths, (25.5 vs 25) so mixing and matching parts doesn't usually work so well.

So you still have the scratchplate with the white pickups on separately? That's what it would have looked like originally, but the metal covered pickups have more oomph to them, so being able to switch back and forth as you like is pretty cool.

Great project! I ended up with a consort a few years ago on marktplaats that I've restored (I've posted my whole restoration here). They seemed to be kind of rare and it made me fall in love with vox. Funny enough I was in the process of buying that pickguard but I bailed out last minute. But I'm very happy to see it ended up on your guitar. It's lovely!

Btw weird fact. My wiring is also weird but different than yours. I got the original pots and I do have volume first and after that the two tones, but my volume know turns the opposite way.

My phantom has the volume in the usual place, but both tones are reversed, that seems to be the usual way they did them, but there are quite a few bits floating round from when they went bankrupt and all the remaining factory stuff was sold off that are 'all bets off', which can confuse things.

I just picked mine up and I have to update my last comment after reading your comment - mgeek . I confirm that it's my tone pots that are reversed not my volume pot

The UK stuff is insane. My luthier made the comment that mine sounded close to a cbs strat he once set up.
It's definitely one of my top 3 guitars. I think I only love my 64 jaguar more but it's close.

The UK stuff is insane. My luthier made the comment that mine sounded close to a cbs strat he once set up.
It's definitely one of my top 3 guitars. I think I only love my 64 jaguar more but it's close.

The pickups are great! JMI were Fender's distributors in the UK at the time, and reverse engineered a strat one, but made it a little hotter, apparently. Brian Jones' prototype teardrop had a strat bridge with the arm attachment bit filed off!

There are often little schoolboy errors with their stuff- sometimes you see bridge saddles all the way back to get them close to being intonated, and the cheap models have flat fretboards and are a bit flimsy, but they *always* sound great, so are worth the effort.

One comment re: the shadow- SammyT...in person they aren't at all similar to the Consort. As I recall Consort is about the thickness of a Fender, rounded fretboard, nice contours- decent quality guitar! Shadows/DuoTones (2 pickup version) and Stroller (one pickup) are slightly less than an inch thick, flat fretboards etc very much a low end twanga! Some are plywood and some are mahogany. My favourite hilarious thing about them is that there's no adjustable intonation- the trem functions kind of like a bigsby but the strings just leave the roller and that's it...no separate saddles. Like a Dano though, they just work, in a garagey lofi kinda way. Pickups are arguably the best thing about them- under the hood they are similar to a Burns Tri Sonic. Bar magnet, fabric wrapped coil.

Martin Kelly's instagram is well worth an ogle for this stuff... his collection is off the hook

surfin_bird wrote: ↑
Tue Jan 21, 2020 12:56 am
Great project! I ended up with a consort a few years ago on marktplaats that I've restored (I've posted my whole restoration here). They seemed to be kind of rare and it made me fall in love with vox. Funny enough I was in the process of buying that pickguard but I bailed out last minute. But I'm very happy to see it ended up on your guitar. It's lovely!

Btw weird fact. My wiring is also weird but different than yours. I got the original pots and I do have volume first and after that the two tones, but my volume know turns the opposite way.

That's amazing, I unintentionally used your post get information about the Consort guitar, when I was restoring it. Didn't know you were Dutch. It is weird that we both restored the same rare guitar in the same country, purchased from the same website and ended up on the same forum.
Top
Post Reply
7 posts • Page 1 of 1