On the road to recovery

Bringing your older offset back to life.
Post Reply
28 posts

On the road to recovery

Hello folks, yep another new addict in need of guidance.
The story is - a year ago I saw an ad were a gent was selling what he called a 1965 Mustang guitar. He bought the guitar 20 years previous from a person that said he bought it from one of the band members years ago in Idaho called Paul revere and the Raiders (that is the story anyway ?). Regardless that second owner had striped the original paint off and presumably was going to repaint it, that never happened, it sat for around 30 years in its original guitar case stripped of paint (candy apple red) in the case of the gent that I bought it from. When I went to take a look at it, I was excited to see that it was not a Mustang but a Jaguar. Ever part was there and the deal was closed at $100
So now the work has begun and little by little I want to bring the old gal back to recovery.
As of now it was cleaned up of what looked to be some old primer and sanded super smooth and then prime/sealed and re-sanded were the body is ready for paint. The necks frets were in horrible condition from what looks to be a lot of playing were the fret board need to be lightly resurfaced and the frets were scared and corroded from time. So the old original frets unfortunately had to go.
I have the shoreline gold base paint that was used on this guitar as it shows gold in the pickup pockets along with the CAR overspray. I have the CAR paint also and I am just waiting to hear back from my painter for a date and time to start painting.
One question was on the headstock Fender Decal, I do want to put an original decal back on as the old owner sanded it off. Question did the pattern numbers on the headstock change for a 1 Mar 1965 B stamped neck, and if so can one buy a good quality decal with the correct pattern numbers.
It seems as I cannot post any pictures to give a visual of the guitar but maybe this is due to being new to the site but if I can hear back on this I would be to know about this question.
Cheers

Ground Control wrote: ↑
Sat Mar 14, 2020 9:45 am
It seems as I cannot post any pictures to give a visual of the guitar but maybe this is due to being new to the site but if I can hear back on this I would be to know about this question.

Re pics, this site doesn't support direct image upload. So instead you link to images that you upload to a free image site (eg imgur.com). Insert the JPG link within the img code that appears in your message box when you click on the little sun/mountain 'insert image' icon (in the edit icons row directly above the message edit box).

Hopefully someone can answer your vintage decal question.
Top

imho, 90% of the fun of a restoration thread is the pics.
Top

I do agree with you, I was just looking into my Windows 10 to see if it has anything were it can help post pictures. I have many to offer on the Jag.
Cheers
I Never Fret - I just Play
Top

Sorry if this does not work I tried to upload some of the picture on Goggle.

That is awesome looking and a crazy good deal! I also have an early 65 Jag that was stripped. I had it refined in charcoal frost.
Top

I guess the pictures worked

It was an honest deal as the gent had no interest in doing anything with it and after I pointed out the cost of paint and time $100 seemed pretty fair.
I have neve played a Fender Jag in my life but I am desperately looking forward to playing this one. I have re-built and scratch built many guitars but this one is calling out to live and play again.
I going with a deep candy apple red but not sure right now how many clear coats to lay on as I want the tone to be as close to original as possible. Maybe two as I understand Fender did not really put a whole lot of paint on them in the first place.
I am pretty meticulous about wanting thing correct for the time and era witch brings me to the Patten number for the headstock, I know I read a while back ( not sure were) that when CBS took Fender over Pattern numbers changed. I be live it was Jan of 1965 if correct when tis happened, but that is the question when and what was the new pattern number if any for the Jaguar.
Would like to see a picture of your JAG.
I just stumbled across this post still not sure as it had three bits of info for the 1965 Jag:
http://www.offsetguitars.com/forums/vie ... 29&t=75080
Cheers
I Never Fret - I just Play
Top

It was a bargain but it will still cost around $500 when completed. The primer, gold base paint, Candy clear, and clear coat has already cost $340 so far so around $500 plus or minus a bit more when done. Paint is not cheap if you use the good stuff.
I am lucky to have a good buddy from the Army who has a paint shop and is willing to paint the guitar for almost nothing when he finds time.
Also I am not in anyway out to make my millions with this little gem, just want to bring it back to life making it look good and play good as it should be.

Consider that if you had done nothing at all to the guitar and parted it out on ebay, you probably would have made $1500. If you do a good job restoring it it could be worth $2500.
The pros here on osg could give you a better estimate. So $100 is a REALLY good deal.
Top

What a great guitar! You definitely got a deal.
Top

Here is my 65 refin that you wanted to see Ground Control... 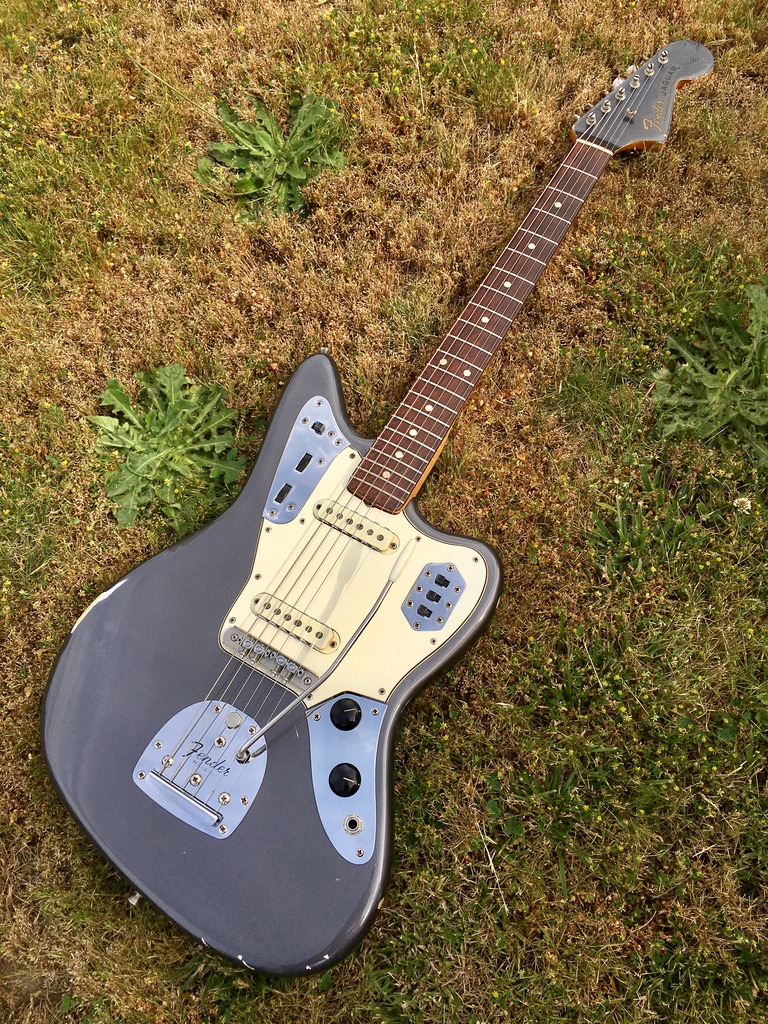 Dang, that's a beauty! You know, I used to be somewhat turned off by non-original finishes on these old offsets, but projects like this are quickly changing my mindset.
Top
Post Reply
28 posts