Everyone needs a stompbox.
Post Reply
8 posts • Page 1 of 1

Ok so I finally got my Microcosm and have taken a week or so to try and wrap my head around this thing. Here are some of my thoughts on the pedal.

It is beautifully weird and unpredictable! There are a lot of sounds I haven't heard other pedals make. I like to play/make shoegaze music and I can hear tons of good sounds for that. I think this would also be a very good pedal for synthesizers. I have briefly run my synths through it but mostly I have been plugging in my guitar.

I wouldn't say there's a huge learning curve, just that the main knobs that control most parameters are macro knobs that may control several things at once all based on which effect is loaded. There's 3 or 4 main knobs (activity and repeats being the main 2) that do a lot of the effect shaping, which doesn't sound like a lot of variety, but often just by changing one knob, all the other knobs now behave differently to the new parameter changes.
I LOVE the secondary knob functions that control overall modulation depth and rate. It just makes everything sound so good. From subtle to fast and weird.

The majority of the effects are envelope triggered it appears, so you may need to change exactly how you play into it. Every effect can be reversed which is awesome. Because of the envelope triggered effects, you can get reverse delays that are much more useable! If you have ever use most reverse delay pedals you'll know what I mean. Most reverse delays are just constantly cycling through the set bpm and reversing audio that falls within it's grid lines of quarter notes or whatever, which results in slightly sloppy, less than ideal delay sounds. You often end up playing in time with the delay rather than the other way around. With the Microcosm you can get very nice reverse delays that behave how a normal delay would act by having your guitar trigger exactly when the reverse starts.

I find myself gravitating towards the haze, tunnel, strum, pattern, and warp effects. You can get weird subtle sounds from them as well as bizarre sci fi sounds.
The glitchy ones are a little harder to incorporate into my music but they are so fun to play with. I could still find uses for all of them, even if sparingly.

The stereo reverb sounds great! It goes 100% wet. I have seen people ask if you could use it as a main reverb. The sound quality is there I think, however it is only applied to the wet effected sound and not to your overall wet dry mix. Most effects are still present when you put all knobs to zero so you would still have whatever effect going on in the reverb section mixed in with your bare guitar. Hopefully that makes sense.

This pedal is very well designed. The 4 bars of colorful lights in the middle actually tell you a lot that is going on with the pedal. They represent user banks and patches, if you are in normal or reverse effect mode, when you have triggered an effect, the tempo of the effect as it plays, rate and depth of modulation, as well as just an on/off effect indicator light. They are also for the global configuration of the pedal.

As of yet I have barely used the looper. From what I have tried though, it works pretty well. I know a lot of people use looping a lot for their playing but I haven't used many loopers to really know what is good or bad in a looper. You do have different looper configurations, like placing it pre fx or post fx. Quantized looping sounds cool but I haven't yet played with that.

I also have yet to hook it up via midi. But I am excited to be able to perfectly sync it to my DAW's tempo. So many of its sounds are tempo based and lots of other tempo based pedals don't have midi, so this is a huge plus.

There are some things that I wish could be better. The filter sounds good, though it does sound stepped. Not a big deal for me. My main issue is with the wet/dry mix. As you turn up the mix knob your dry guitar tone gets turned down as the effected signal is introduced. I have to change the amp master level a lot since some effects will be more dry, (hence louder), and some more wet. (quieter) Also I have trouble getting the power cable to come out of the unit when I am done. It is in there so tight I get nervous I may break something. .

I am typically more into rack units for their deep editing capabilities as well sound quality, however I have not heard of anything that can do what the Microcosm does. It is both complex and easy to use with great sounds for ambient, shoegaze, weird experimental, electronic music. It's so easy to find useable sounds fast and hav been very inspiring.
I wonder if anyone else has one yet?! 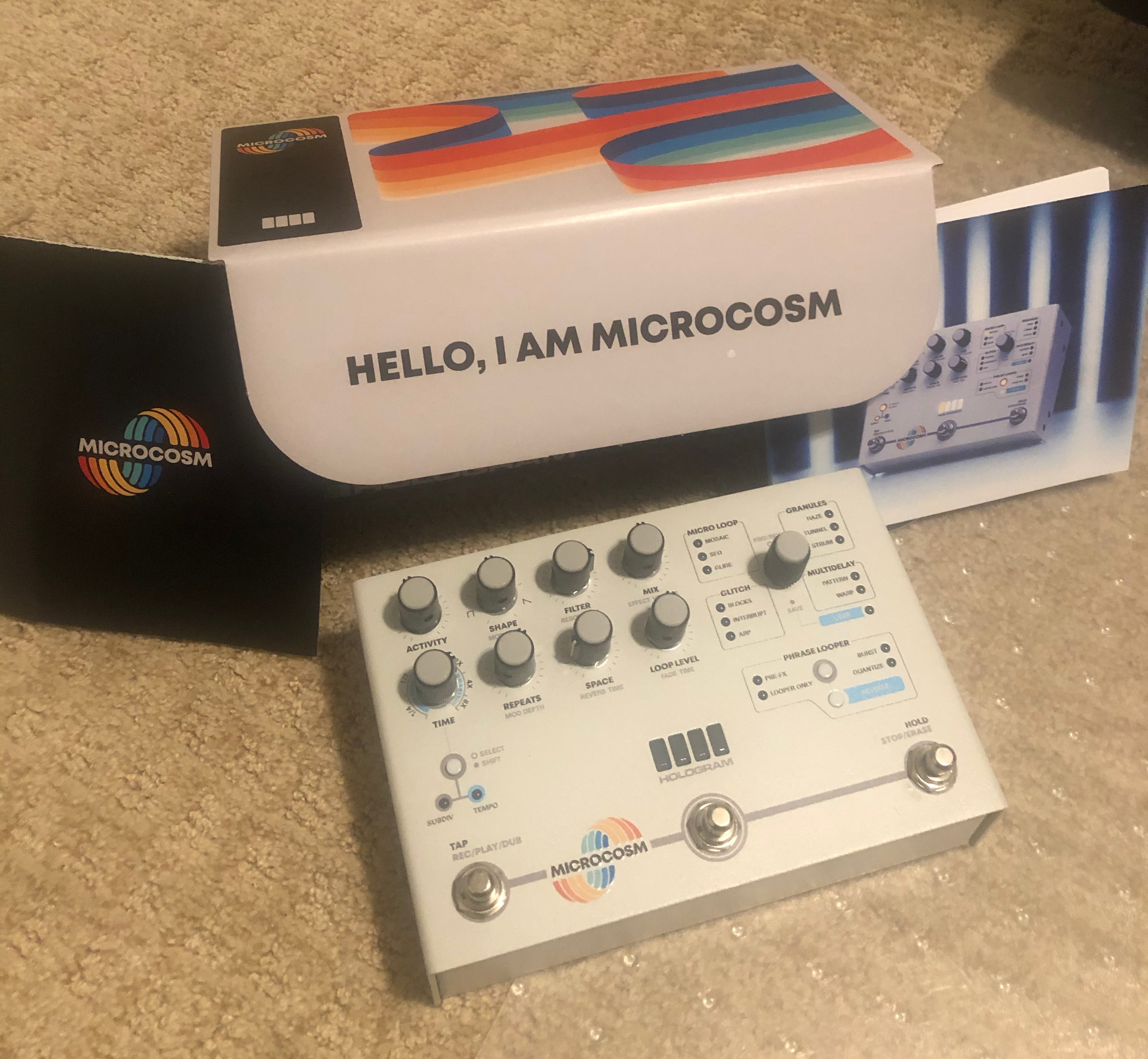 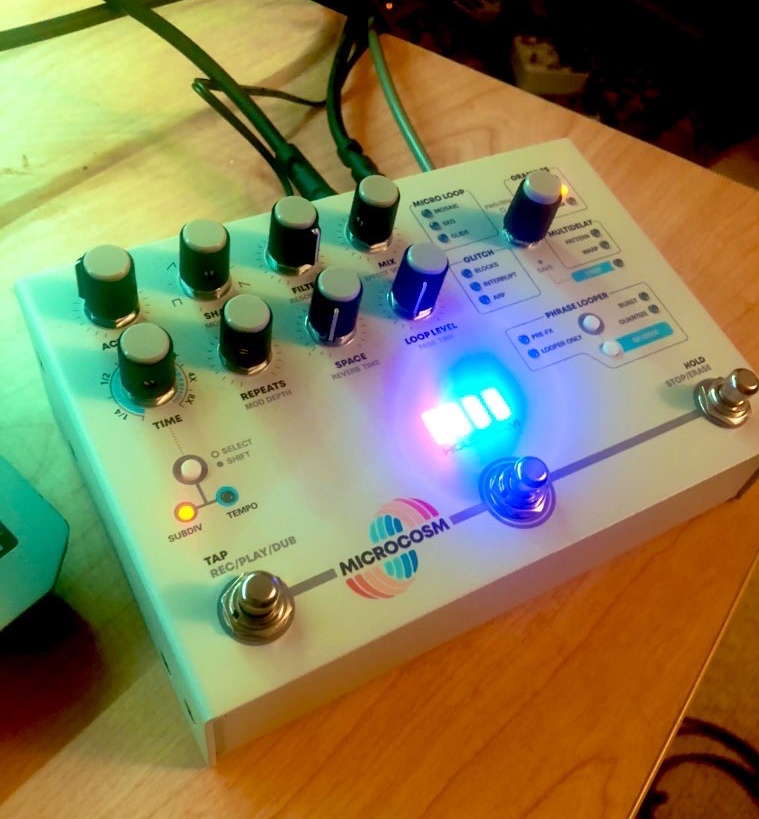 That’s a great review, and pix - thanks for posting it.

I feel similarly about the Infinite Jets in a lot of ways, there are lots of things I’ll probably never use, but are nice to have. I’m sure this is factors on top of what the Jets can do, and the additional things like a looper, delay and reverb as well sound great.

I’d love to see if anyone could compare the 2, although it may make me sell some pedals to get this one, and the few things that I’m selling have just been sitting longer than any other time I’ve had stuff listed.
-David

This may as well have been designed for me, and I expect i will inevitably get it in a while

I've never owned a pedal of that expense though. but clearly the inevitability is going to make it happen.
Top

I just took delivery of mine yesterday. What an epic pedal. In my setup it’s probably going to cover looper and ambient drone box duties, and can do both quite capably. Still lots to explore, seems like every preset is its own universe of possibilities and I definitely haven’t heard everything it’s capable of.
Top

ThatGuyOverThere wrote: ↑
Mon Sep 14, 2020 9:15 pm
I just took delivery of mine yesterday. What an epic pedal. In my setup it’s probably going to cover looper and ambient drone box duties, and can do both quite capably. Still lots to explore, seems like every preset is its own universe of possibilities and I definitely haven’t heard everything it’s capable of.

Ive nearly saved enough. Hope they are there next month. Is posting to the UK so wont be cheap!
Is an ideal multifx for shoegaze/loop/ambient weirdos like me, like i no longer want to buy a synth or sampler. First thing i might do is try it out as the only pedal i use like its its own board (plus a drive or odd thing).
Ive been using ehx Hazarai for over a decade and its also the only thing close to replacing the odd 'hidden' settings on that all at once (maybe 5 pedals could, but this can do it all by the looks of it and still be at 10% of its capacity).
I want to find out the quality of its basic delay but can certainly live with using a handy analogue-sim delay with it.
Top

Finally got one! Bit early to review after a couple of hours, but agree so far hard to get head around.

The envelope control sometimes seems to track strangely but theyve got a firmwareupdate for that as after a clean run putting it at end of chain i must say i was frustrated. Sometimes fx disappear with fuzz or volume gets low. I think the unpredictability is for sure present as i am used to early reflection patches and delay but the settings like haze are quite random. Likewise it seemed to get a bit "sticky" on changing the tempo based on when it was triggered. (A sensitivity knob is missed? But will try the update...)

Starting with the negative here though:
I could happily play this with the reverb alone, i can use the delays just as an analogue simulation, i love the modulation option.
Looper also great but a few options to try.

For sure i will use some sounds more than others but like the synthesiser vibes they all bring. The microloop mode expands on my soundonsound looping textures without having to play soundonsound! Hazy effect add a lot more interesting textures but as above finding something that is analogous to "early reflections" with a fuzz on is hard- not aiming to duplicate that effect, just something smeary and reverby perhaps.
Love that the multidelay modes seem to vary based on playing.
Where it gets more ambient seems to be when reverb is engaged, of course, but less in a way that 'it now has verb on' its like that adds and interacts to form new texture on some modes.
Got to explore the glitchier ones too. But so far, i definitely spent a couple of hours (unaware of time) going throuhh each of 44 odd effects Plus looper and options having a technical walkthrough!
Top

had my Microcosm for a few months now. I'm a big fan. Saving presets isn't quite as easy as i thought it'd be, but it's doable. looping is a breeze and the sounds are entire universes unto themselves. the reverb is actually one of my favorite things about it.
Top

I agree about the verb. If this took out all the main effects id happily still like it for looping verb modulation.

My comment disappeared in the great reset. I followed up saying after firmware update tracking improved.
However it still wont track everything all the time like a killdry reverb drone. However, i kind of worked out a routing thats a bit like sidechaining and like the results of that. Wet/dry to separate stereo in, only R out used, tuner (to mute) on L out so is optional. It hears dry signal but i dont necessarily- seems to work.

Trying at band practice was hard to integrate intuitively, so there is a learning curve for sure. I feel like i should make some presets so i can stomp on it and not have to twiddle- a midi selector might be handy for that.
Top
Post Reply
8 posts • Page 1 of 1