The Psychology of GASing for a Gibson (es-335)

For guitars of the straight waisted variety (or reverse offset).
Post Reply
26 posts

You wouldn't have typed all of that if you didn't want it. If you can afford it go get it. If you experience buyer's remorse it shouldn't be hard to offload it in today's market.
Top

My Casino was a Peerless made one, I had done my research and read how that was the one to get. I kind of wrote off the whole concept at that point, though... I was like, shit, if this was the good one, what are the bad ones?


Hmm. I see. Well, either that was one hell of a dud, or that 330 is stellar. That or I have no clue what a proper guitar should be like. A depressing thought if true. On the other hand, I'm a cheap date who can suffice with cruddy guitars.

Now, when we talk about labor relations, then sure, Gibson fucking sucks. I mean, the reason they moved down south was simply to take advantage of a region where there was no union to challenge them. Pretty gross.

There's that, and I saw in a HJ era factory tour that they rout a pretty large cavity between the neck and fret board to insert a RF tracking device. All to keep their employees from making off with a LP. So much for quality. Just put a massive void in the timber right where it wants to bend most, but where the customer will never see or know about it. All because you treat your employees so poorly that they will likely want to steal from you. Should make for some fun neck issues in 10-20 years.
Top

Not the guitar for me sonically or ergonomically.

I think a 90’s (Samick-built?) Epiphone Sheraton with upgraded low wind pickups and wiring harness would fit the bill fine, and without the reservations about hide glue.
Top

I played Gibson’s as my main gigging guitars throughout the early-mid 2000’s. After the band that called for them broke up I went Fender full time.

Anyway, I decided I wanted a 335 a couple years ago and was on the lookout for a new one, and tried probably 30-40 335 type guitars, including about a dozen actual Gibson’s. Cost was a bit of a factor, but I could have swung a Gibby. I bought an older MIK Riviera because it was the best player out of all of them. The stock mini humbuckers aren’t the best, but the Gibson’s weren’t night and day better either. Now the only question I have now is do I drill a hole in the top for a Bigsby.

I get what you said about a Gibson as a status symbol and having one meaning you are a “real” musician. I had a nice 80 LP Standard for years, and still have a 60’s SG. When people see my guitars they are the ones people go/went for. They never understand why I go for my tele or JM first.
Top

Not that anyone was too invested in this topic, but off the top of my dome:

Postcards: never thought they'd wind up with a '61 SG model as their #1, but love it very much (despite some roughness in BTS workmanship). Both feels strange wielding a fancy pants Gibson, but also takes some pleasure in the fact that it is a Gibson.

Larry: He really likes his Gibsons, in particular his ES-330 which is just streets ahead of a Peerless Epiphone Casino he had and hated so much that he gave it away.

Me: Samick and Peerless MIK Epis are better than the in-house Gibson MIC epi's of today, I bet that casino was a dud, but having played a vintage ES-330, I understand that they can be quite magical.

Also, me: Playing a Gibson ES-335 feels a bit conspicuous, especially given the scene I (used to) gig in.

Some other folks (sorry, can't recall who). Agreed Gibsons have status symbol baggage and could feel a little too precious to play often. They suggested I don't invest so much money in a guitar I might not care for. Others suggested doing exactly that, then selling it on if I didn't like it.

I'm not trying to restart this discussion, but wanted to preserve the broad strokes for posterity.
Top

I've got the same thing going, but then for an ES-345, which to me is everything perfect about the ES-335, probably one of the more versatile guitars ever created, but then even more versatile and actually understated stylish (I dislike the soberness of the 335, with the not-suiting dots or small blocks), even more stylish than the range-topping ES-355.

Thing is: alternatives are scarce if not non-existent: It's either Gibson, or some 1970's lawsuit-era guitars that come close but not close enough. I've tried the Ibanez 2467 and the Greco SA-800, but they were expensive guitars on their own.

"Luckily" the ES-345 isn't an as coveted model as the 335 is, but it still needs to bring up a nice sum. Also Gibson doesn't make a whole lot of them, and when they do, it's in limited numbers.

They all have necks I can't feel comfortable on. I don't like the '50 fat neck, the '60 slim taper neck, the late '60 pencil,... Gibson necks just don't work for me. I've played and loaned multiple examples of it: both vintage, modern & reissues. Most of them had the sound, none of them had the feel.

I'm too shit of a guitar player to own such an expensive piece of kit, it will feel wasted on me, and it will never be a guitar I'll truly enjoy playing due to the necks on them. Eventhough I can (comfortably) afford it.
Top

Also Larry: maybe just buy one used, play it for a year, sell it if it doesn't work for you for whatever reason and you might not even lose any money on the deal.

Sometimes the thing we long for the most we hold off getting due to fear of disappointment with it for some unmet expectation. Get one, and if it isn't right for you, flip it and get your money back. It's pretty much that easy with vintage or premium guitars.

As a side note and fwiw, the only Gibson I own is an ES-135. I prefer it's aesthetics and form over the ES-335 but that's just me. It helps that they're pretty affordable as compared to an ES-335 if you can find one. They pop up now and again. 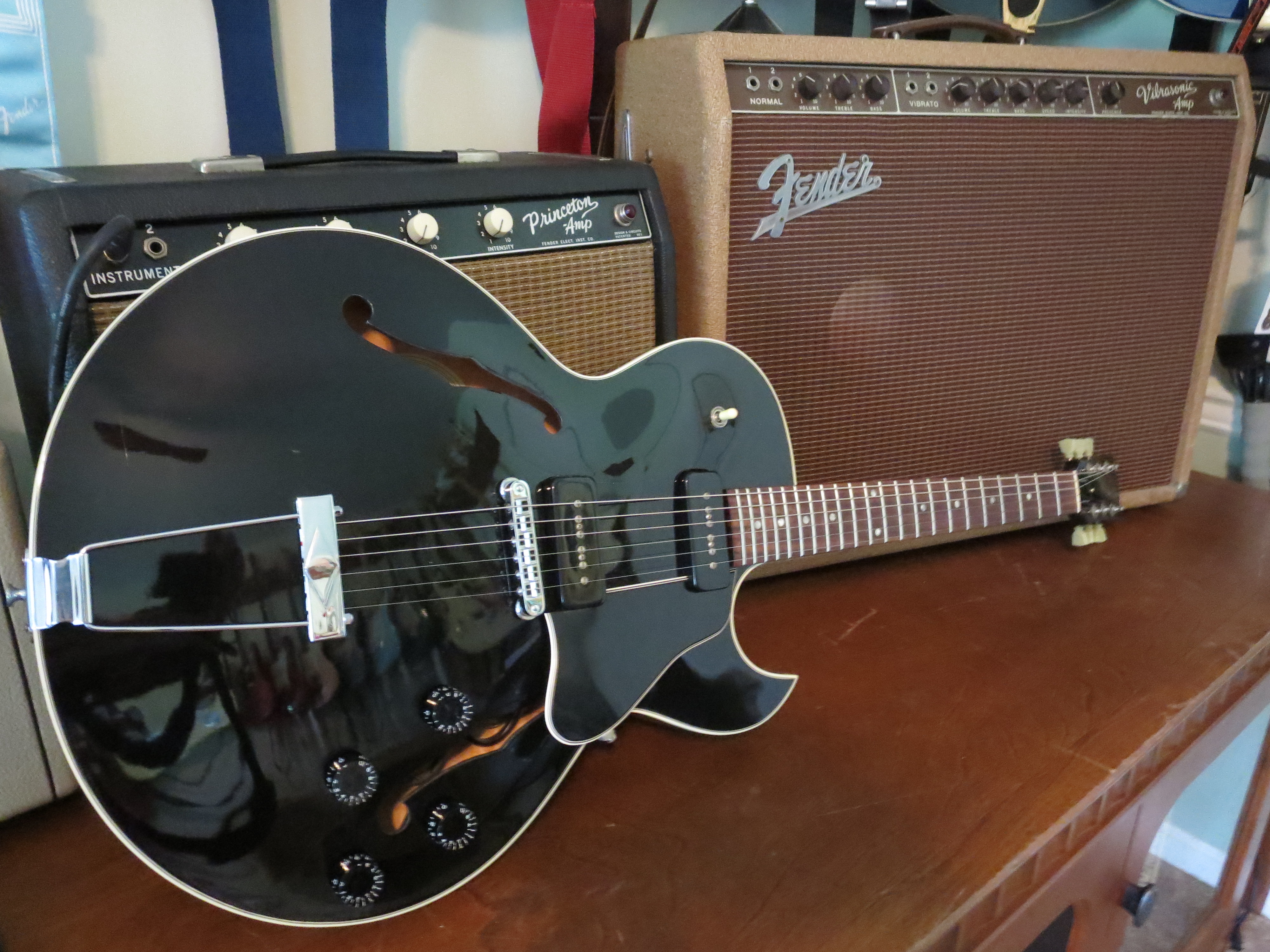 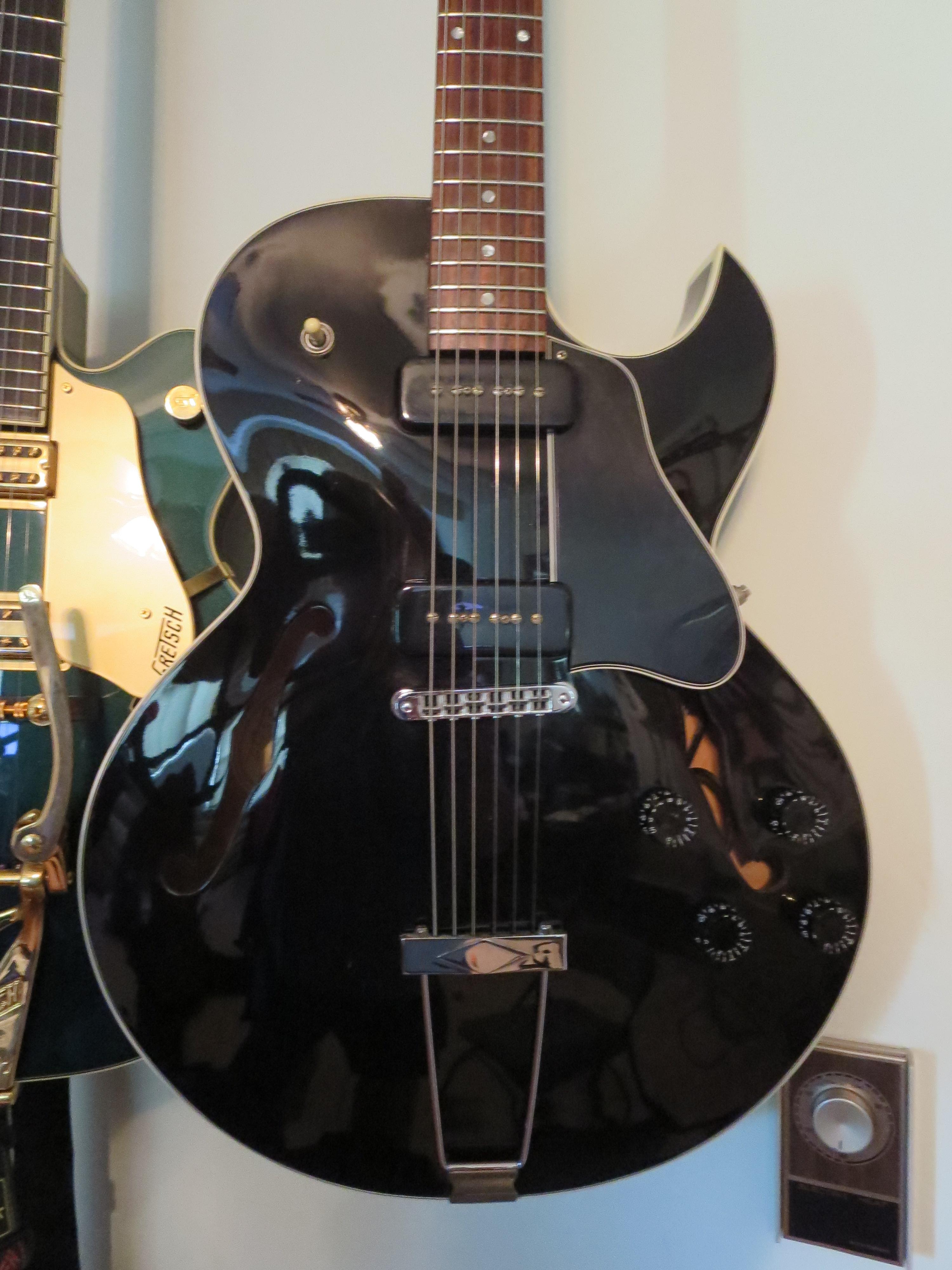 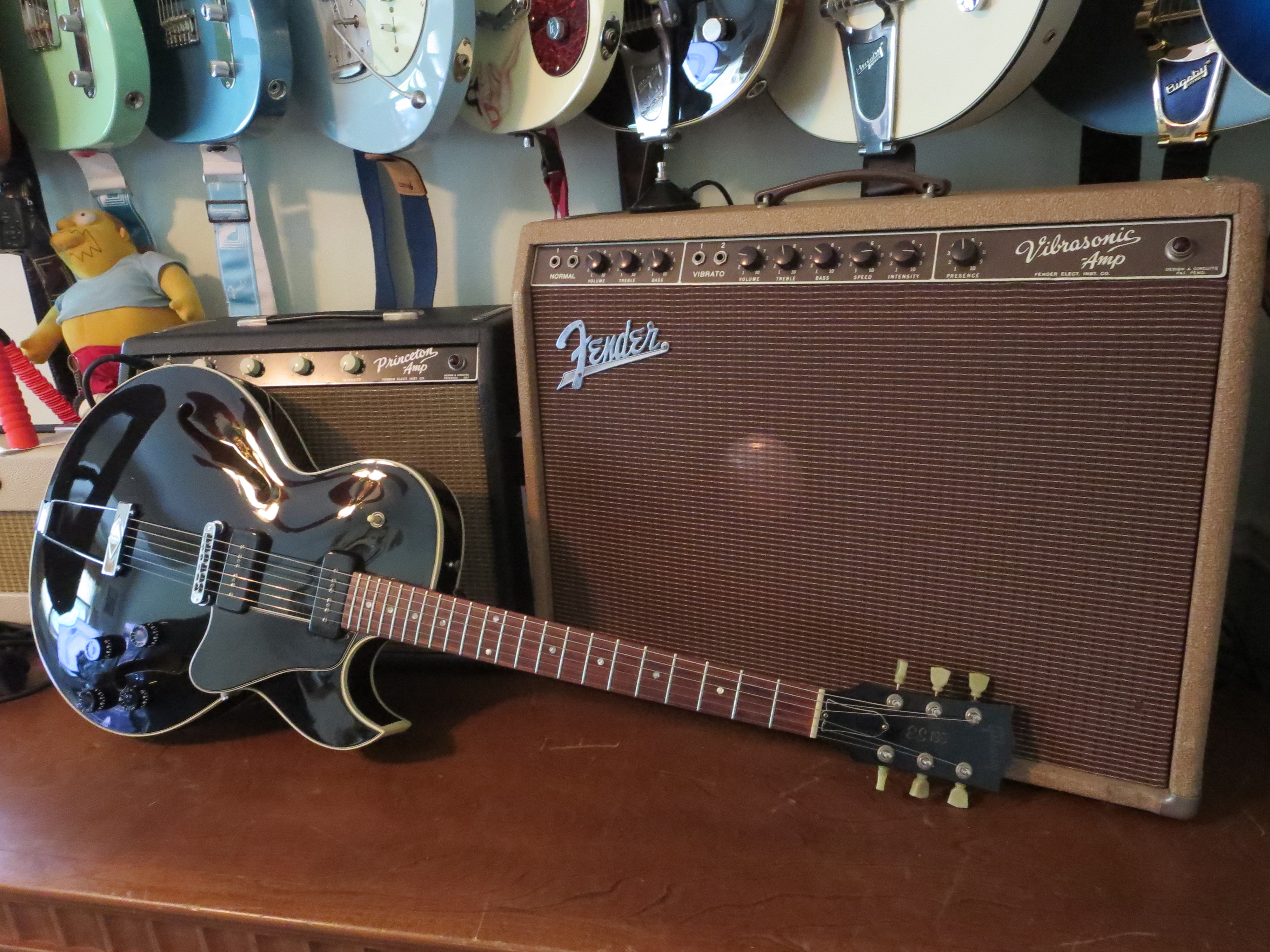 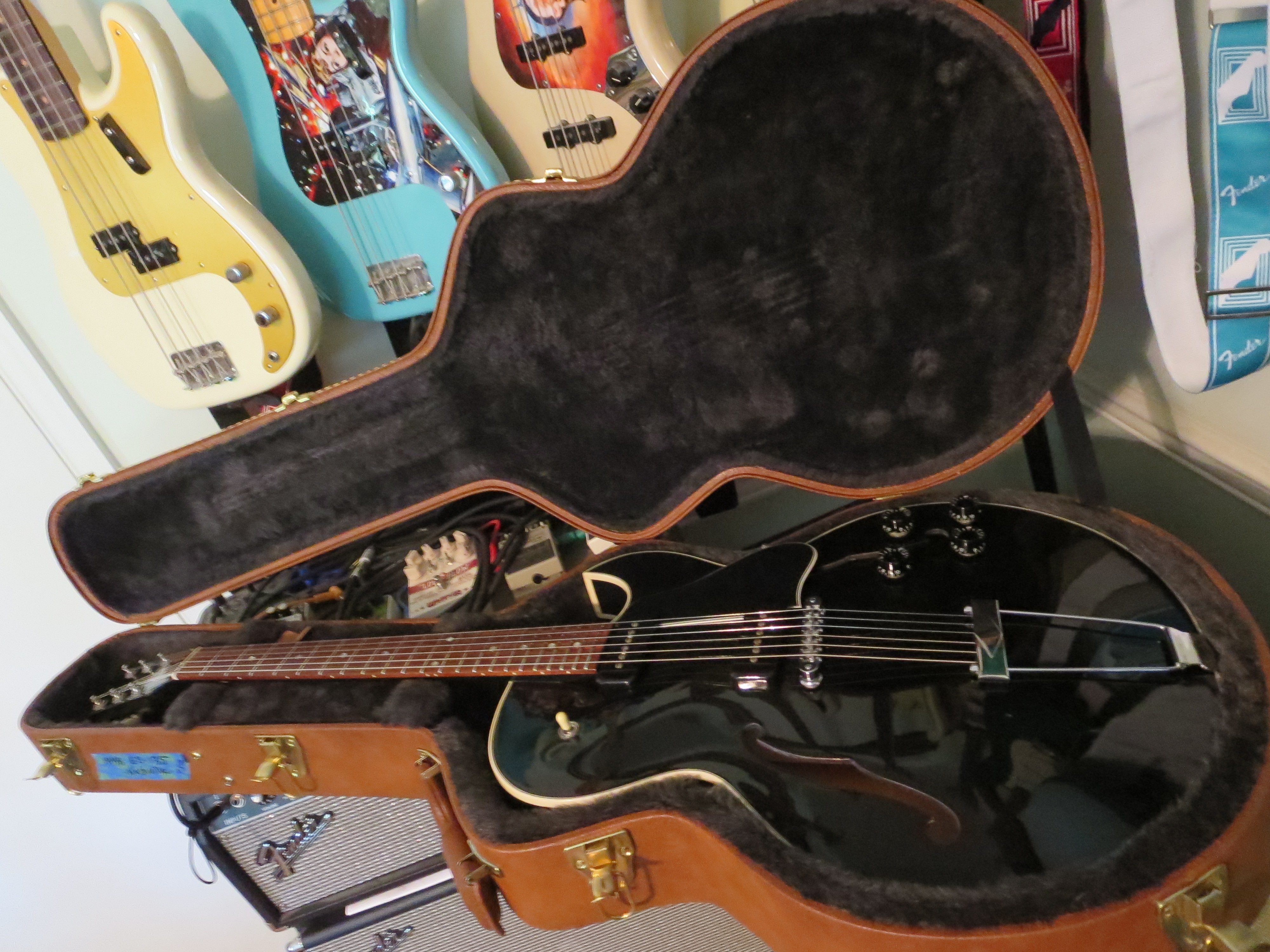 I've looked at those. Especially the HB version in sunburst .

It's simple enough how to do it, but I just don't think I'll ever make it happen. They're just too expensive. Finding a sufficiently good deal on a used one demands trying them out in person, and I see maybe one per year in the Philly metro.

I just resent how expensive they are. That 135 is a perfect example of a guitar that's every bit as expensive to make, but costs an average of $1000 less.

I don't think I can play a guitar that's an "investment." I'm too cynical and contrarian to fall for that hype regardless of how justified it may be.

Anyway, anticlimatic maybe. But my goal here was a discussion of GASing for status symbols and how different actors- i.e. brands, dealers, fellow musicians, the public play into it.
Top
Post Reply
26 posts