NGD! The guessing is done...it's a Romantic guitar by Robert Barth!

Re: Incoming NGD! The guessing is done...it's a Romantic guitar by Robert Barth!

sookwinder wrote: ↑
Sun Aug 23, 2020 8:18 am
wow! that is nice. please tell us how it smells when you receive it. I love the smell of old instruments.
What caused me to verbalise what I was thinking as I looked at the photos was the photo of the back of the instrument. That is nice.

congrats and as they say, well played.

Thanks, and will do. I agree that the photo of the back is particularly enticing...a single piece of maple cut 120 years ago. It's amazing just an an admirer of woodworking!

I've been tempted to buy another classical guitar as a couch player, seeing as the one I used to play is at my mum's iN England.

This thing is on another level though. Exquisite!

Thanks, and go ahead, do it! I've recently returned to playing classical guitar and it's so much fun. Just a completely different playing and listening experience. It's brought back so many memories of my early days of falling in love with the guitar. The tone is just peaceful in a way that is really resonating with me right now. Like a musical stress ball

Well, it's been a very tense month waiting for this to arrive - I found out after the fact that the seller was shipping this 120 year-old classical guitar without a case of any kind, and despite leaving Germany two days before my lute left Turkey, it was lost in tracking limbo for 4 weeks longer. It just said "Departed Germany August 26" and "Awaiting arrival in Canada" all the way through the end of September.

I was starting to envision the many fates that might have befallen it, when all of a sudden, it popped up in Canada - and was delivered within a day of doing so. The NGD is finally upon us! 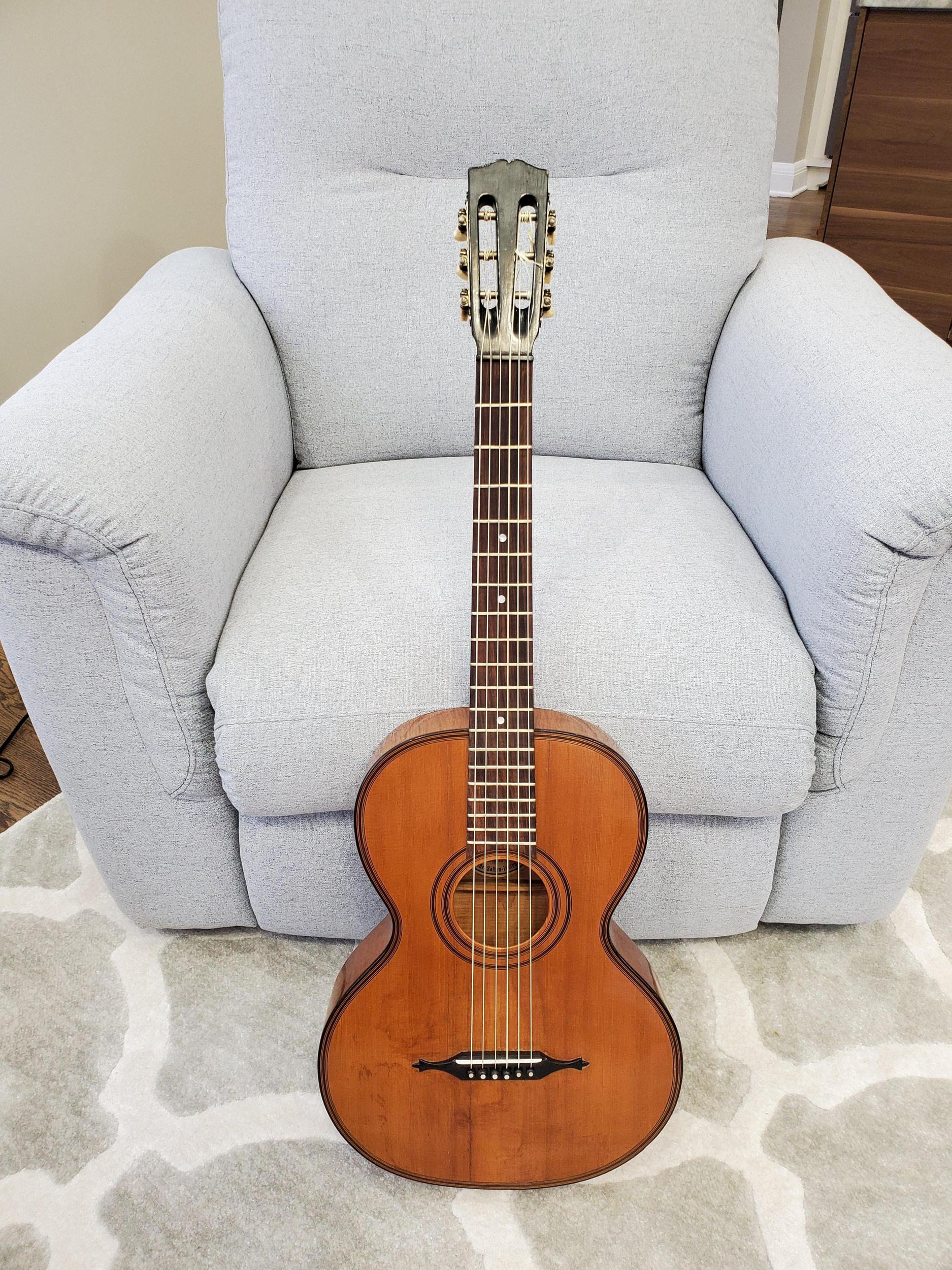 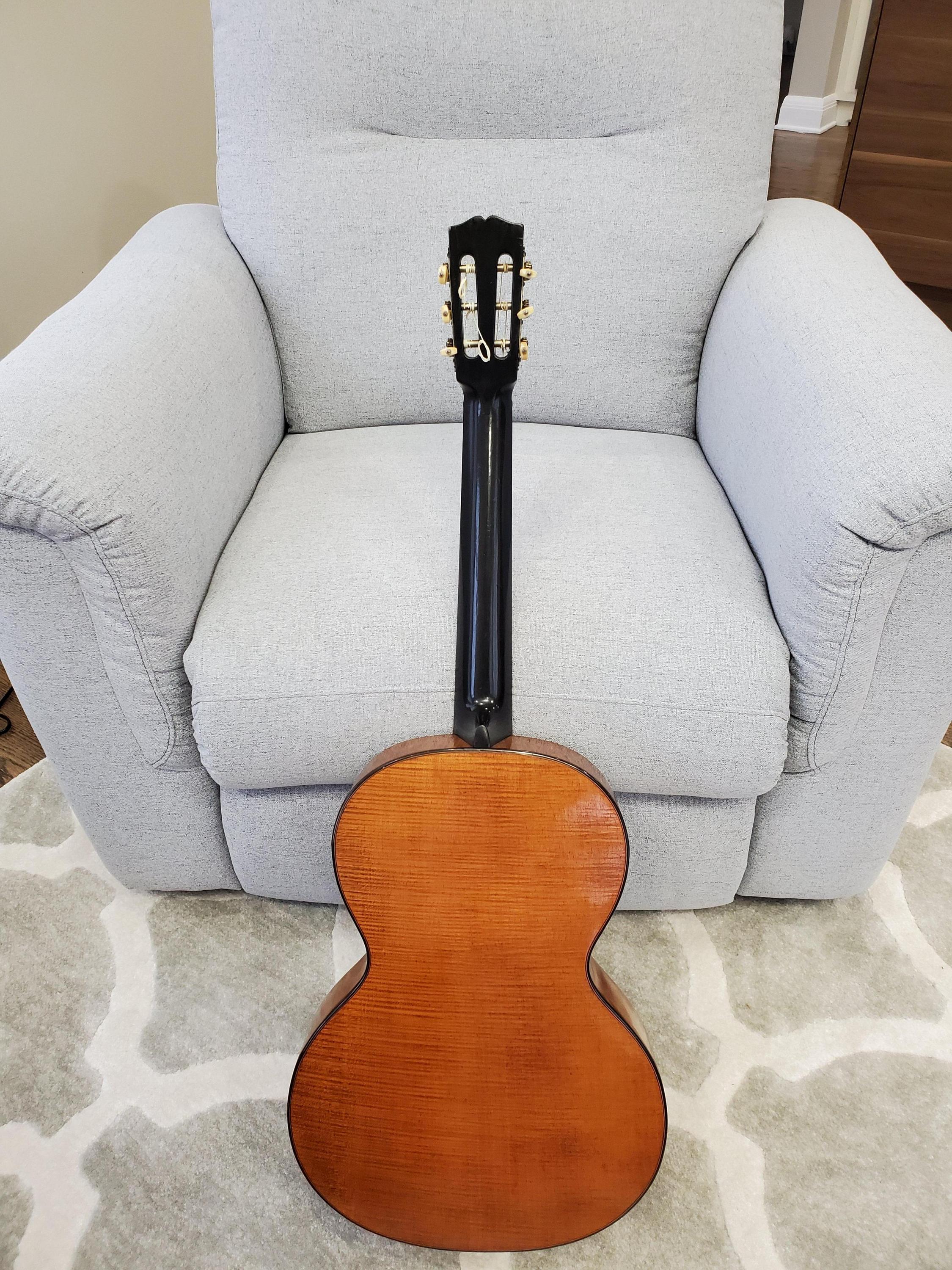 That small size, plus the woods drying out for 120 years, makes it an absolute featherweight, and it feels both compact and intimate to play. It just hugs against the body in a way a modern guitar doesn't, mostly because of that shallower depth.

Despite all that, it projects surprisingly well. It has no shortage of volume on tap. It came strung with Aquila Ambra 800 strings, which are a synthetic recreation of 19th century gut and silk guitar strings. They have a pleasing texture compared to smooth nylon or fluorocarbon strings, and the bass strings are much less overtone-rich. Between the guitar itself and the strings, it is absolutely a tone out of another century. It sounds out of place on modern pieces, but adds a dimension to Romantic and earlier repertoire that I never realized was missing.

Its playability is quite shocking for its age. The only issue I've discovered so far is that someone appears to have aggressively leveled the 8th fret under the 1st and 2nd strings, possibly to try to remedy a buzz from a high fret, and didn't crown it. If you try to play a high C mf or louder, you get a buzz. The frets look original to me, and unfortunately I'm not sure that fret can be saved. Some day, likely post-pandemic, I'll take it to a skilled classical luthier for assessment to figure out if the fret has to be replaced. All in all, I can live for now with one or two notes that buzz a bit under specific circumstances.

My next frontier in classical guitar technique is learning to play without nails - lute technique more or less demands it, and I want to take a proper go at that, plus my favourite Romantic composer, Fernando Sor, had this to say about nails:


Never in my life have I heard a guitarist whose playing was supportable, if he played with the nails. The nails can produce but very few gradations in the quality of the sound: the piano passage can never be singing, nor the fortes sufficiently full.

I can already tell that this guitar has a tone better suited to playing without nails. Modern classical guitars have so much bass to their tone that the treble strings are really in a war for volume. This guitar has a much more balanced tone, and while the bass notes are full enough, it skews heavily toward the midrange frequencies. Plus, if it was good enough for Fernando Sor, I wouldn't be shocked if it can be good enough for me, especially on this guitar.

Overall, I'm quite thrilled with it and had trouble putting it down today.
Top

Glad to hear it arrived safely.

No case! I would have been dying the whole time.

Thanks. I know it's not the bread and butter of most folks here, but hopefully it's an interesting enough read!

I've definitely experienced "vintage mojo" on an electric guitar before, but it's really quite something to play a guitar that already had a personal history before WWI began. It's like a living piece of history, that happens to also be a great playing and sounding guitar. It's pretty wild.

Thanks! It's definitely among my top gear purchases of my life.

Oh, I was pretty stressed about it. Each week that went by without word on it had me saying, "oh man, I'm never going to even get to play it. It's either gone, or in splinters after being impaled by a forklift somewhere 1000km away."

I bought it through essentially a historic instrument classified ad website, so I had no buyer protection to speak of. After the seller told me it didn't have a case, all I could think was, "I'm never seeing that money again."

I'd normally be annoyed that the seller failed to disclose the buzzy, partially-shaved 8th fret, but to be honest, I'm just so grateful that it arrived intact that I'm not sweating the small cost or inconvenience of dropping it off with a classical luthier some day.

This is probably the most I've ever enjoyed playing a guitar. The tone, the feel, I sometimes end a practice session with a serene, almost drunk feeling from the endorphins. I absolutely love it.
Top

That’s really great and all, but how is that Stairway riff coming along?
Top