Today I got a guitar I have dreamt of for quite a while, a 60's Hopf Saturn 63. I'm not sure of the exact year but from what I know it is probably a late 60s one. 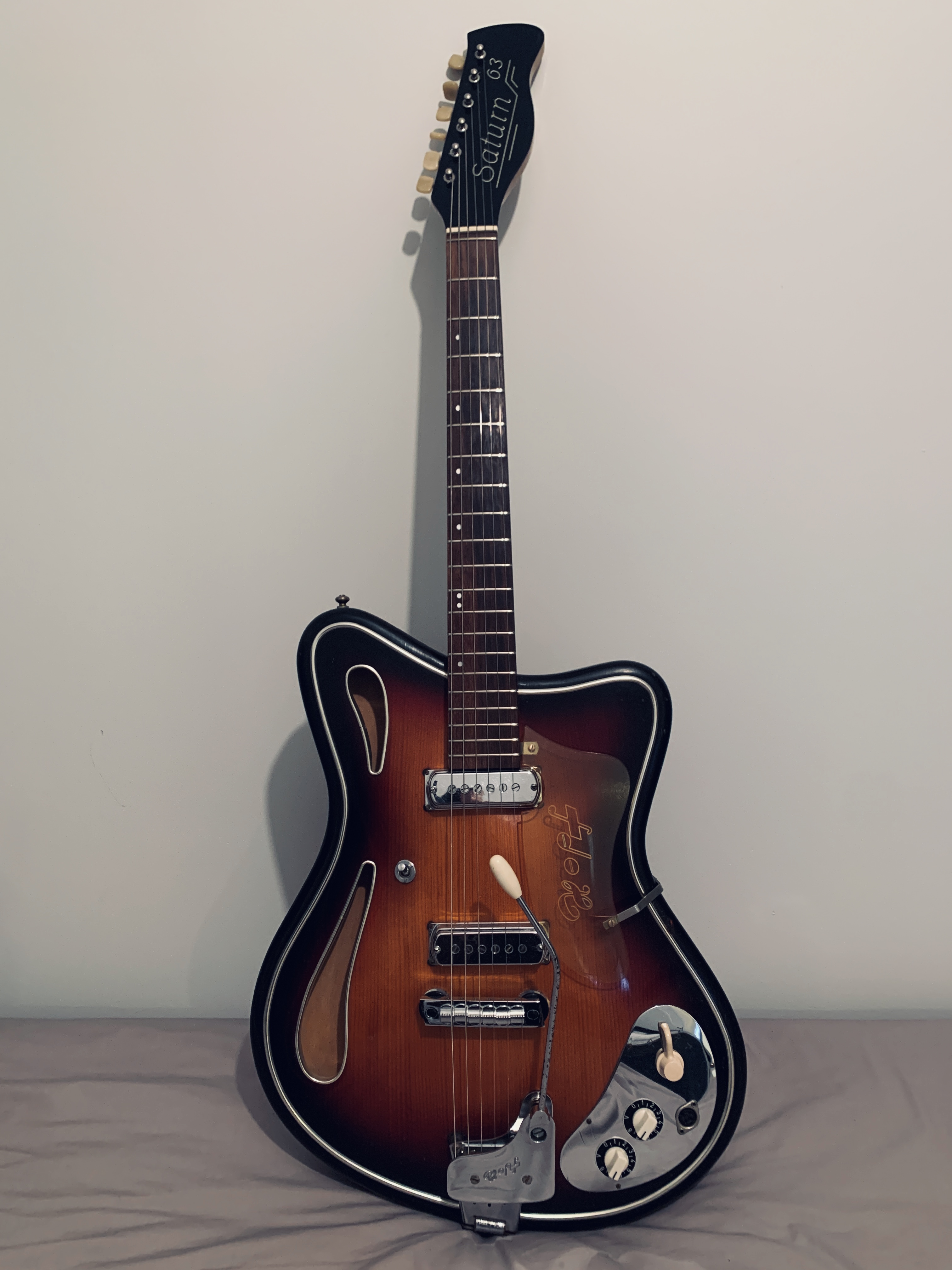 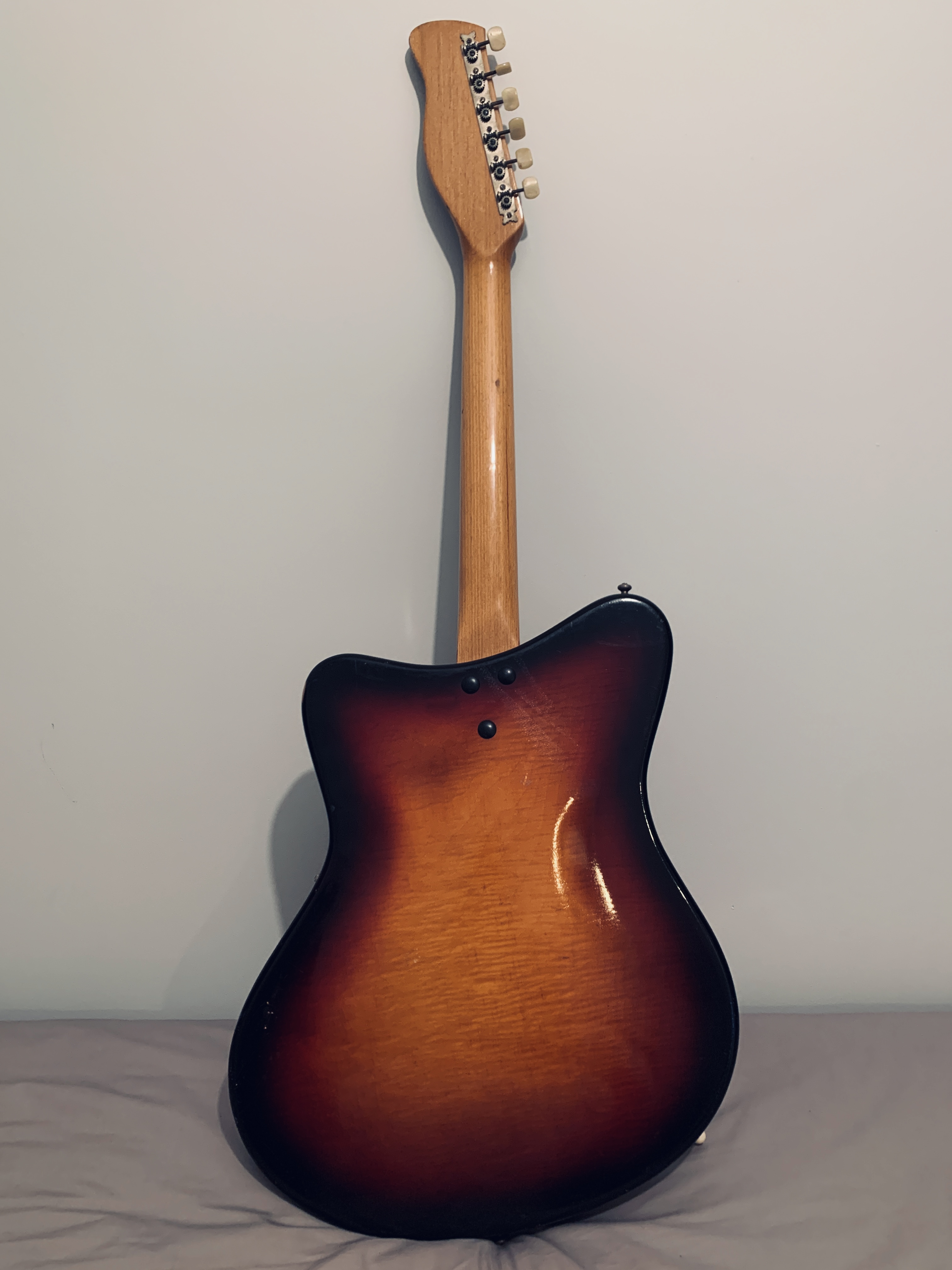 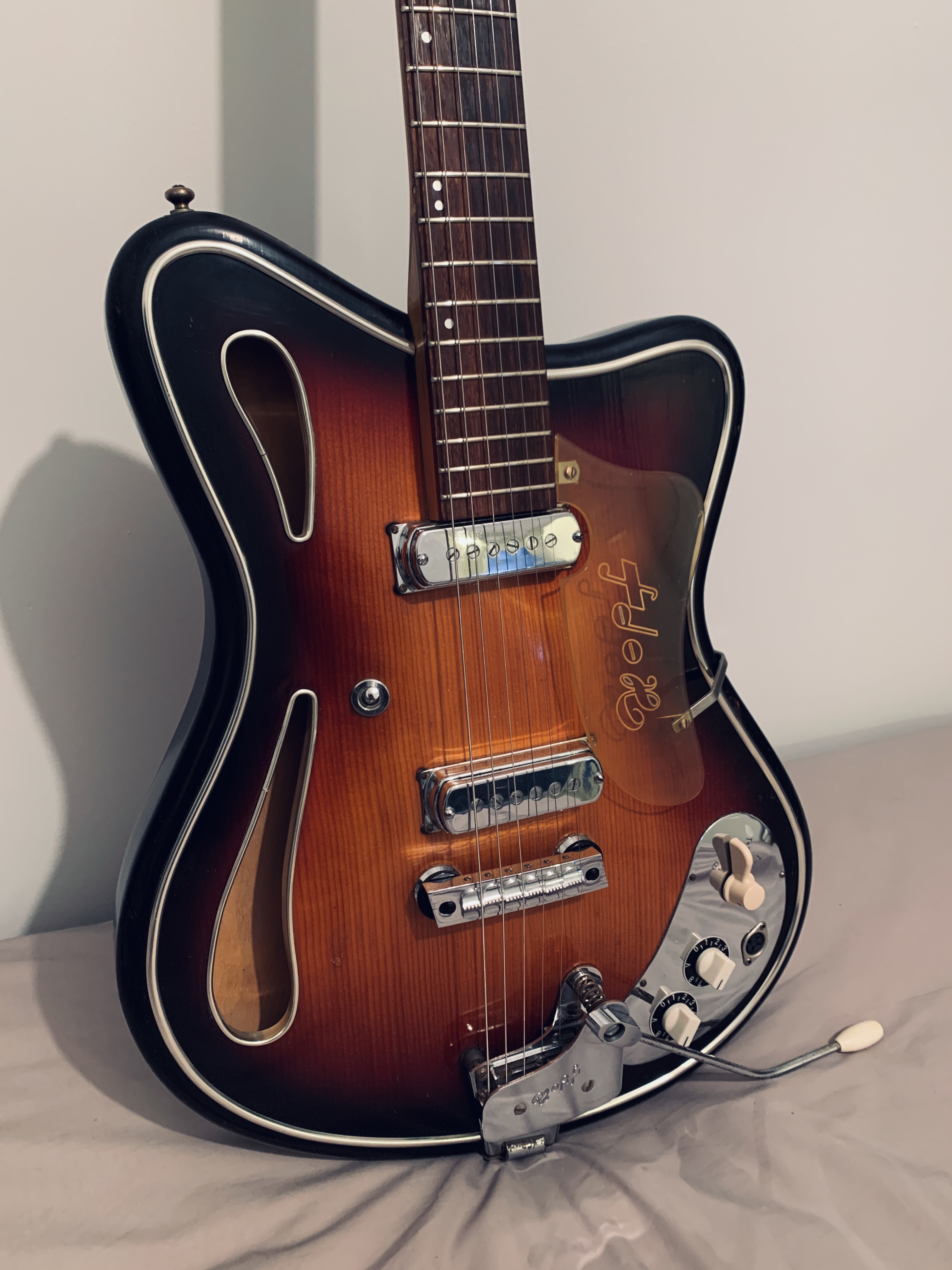 I had to take the photos on my bed because I was too scared of it toppling over on the floor. Not because I'm going to sleep with it.. honest!
Top

Lovely. And in great shape, too!
Top

Well that's cool. I've never seen one of those before: how's it sound?

oh my god, that's my dream guitar. I've never had a chance to see one in real life. they pop up in germany once in a while for around 900 euros, but I would love to play one first. How does the neck feel? It looks like a bit like niche souped-up Framus

It looks to be in amazing shape.

Congratulations!
You think you can't, you wish you could, I know you can, I wish you would. Slip inside this house as you pass by.
Top

Thanks - yes it is in remarkably good shape, whoever owned it obviously played it a lot but took great care of it!
Top

It sounds fantastic! I had played one before but only acoustically and fell in love with it then, sounds great unplugged. There is no tone knob, rather it has 4 kind of presets which are B-, T+ B+, T+ B-, T- which are of course various bass / treble boosts and cuts. The pickups produce an amazing clean tone which are really perfect for kind of harmonic surf and rockabilly style sounds. What really surprised me though was how well it responds to pedals, it really seems to impart its character through overdrive. The play between open and fretted strings is outstanding, and that really suits my playing style (I use a lot of open strings when I play). Couldn't be happier with it!
Top

Kinx wrote: ↑
Fri Nov 06, 2020 12:42 am
oh my god, that's my dream guitar. I've never had a chance to see one in real life. they pop up in germany once in a while for around 900 euros, but I would love to play one first. How does the neck feel? It looks like a bit like niche souped-up Framus

Funny story for me regarding this - a vintage guitar store here in London had one for years, and I played it once, just unplugged, and fell in love with it. However I inadvertently broke my rule of never playing a guitar you can't afford - the other time that happened was with a Fender Starcaster which I just loved the look of (very different beast to this of course), loved that guitar.. when I asked how much it cost I put it down right away

. It was a similar story with this, although not nearly as dear as the Starcaster! Also at that time I didn't feel like I had 'earnt' the guitar as I was still a relatively new guitar player at the time. Anyway, eventually I thought, I have to get that Saturn, so I started saving up for it.. I finally saved enough to get it about a month ago, and every couple of weeks I would check the website to see if it was still there, and when I finally phoned them to buy it it had been sold the previous week! After at least 5 years

The neck is incredible, shorter scale of course, but just begs you to play it - also think this is pretty much the perfect shape for me personally (I don't tend to like very chunky necks).

Yes I agree about the Framus connection - funnily enough the other guitar I was drawn to in the same store as the Saturn was an old Framus Television from the mid 60s, that was also a fantastic guitar, a real beast.. I did prefer the feel of the Saturn though.. you know when something just feels 'right' - it was one of those!
Top

Thanks! Yes it is in rude health it seems.. The only thing I think needs looking at is the intonation, a slight detuning on some strings playing high on the fretboard, but have not been brave enough to adjust anything yet!

The burst is really good, and this particular one seems to be made of one piece (I know a few of these have 2 piece bodies) - not that I think that makes any real difference aside from aesthetics. I don't know if you call it binding or not, but I do love a little chrome

Congrats! That is a beautiful guitar.

Hows the trem? It looks kinda like a bigsby copy, but way cooler aesthetically.
Top

Hows the trem? It looks kinda like a bigsby copy, but way cooler aesthetically.

Thanks! The trem is great.. I honestly think I only ever played one guitar with a Bigsby and that was years ago for a few minutes in a guitar store so I can't compare with any great honesty! It doesn't pitch down as much as the one on my Jazzmaster but it's really musical, if that makes sense.. just feels right. I took a couple of pictures of it plus the bridge, maybe that could help tell if it's like a Bigsby (I assume it's gonna be something similar) 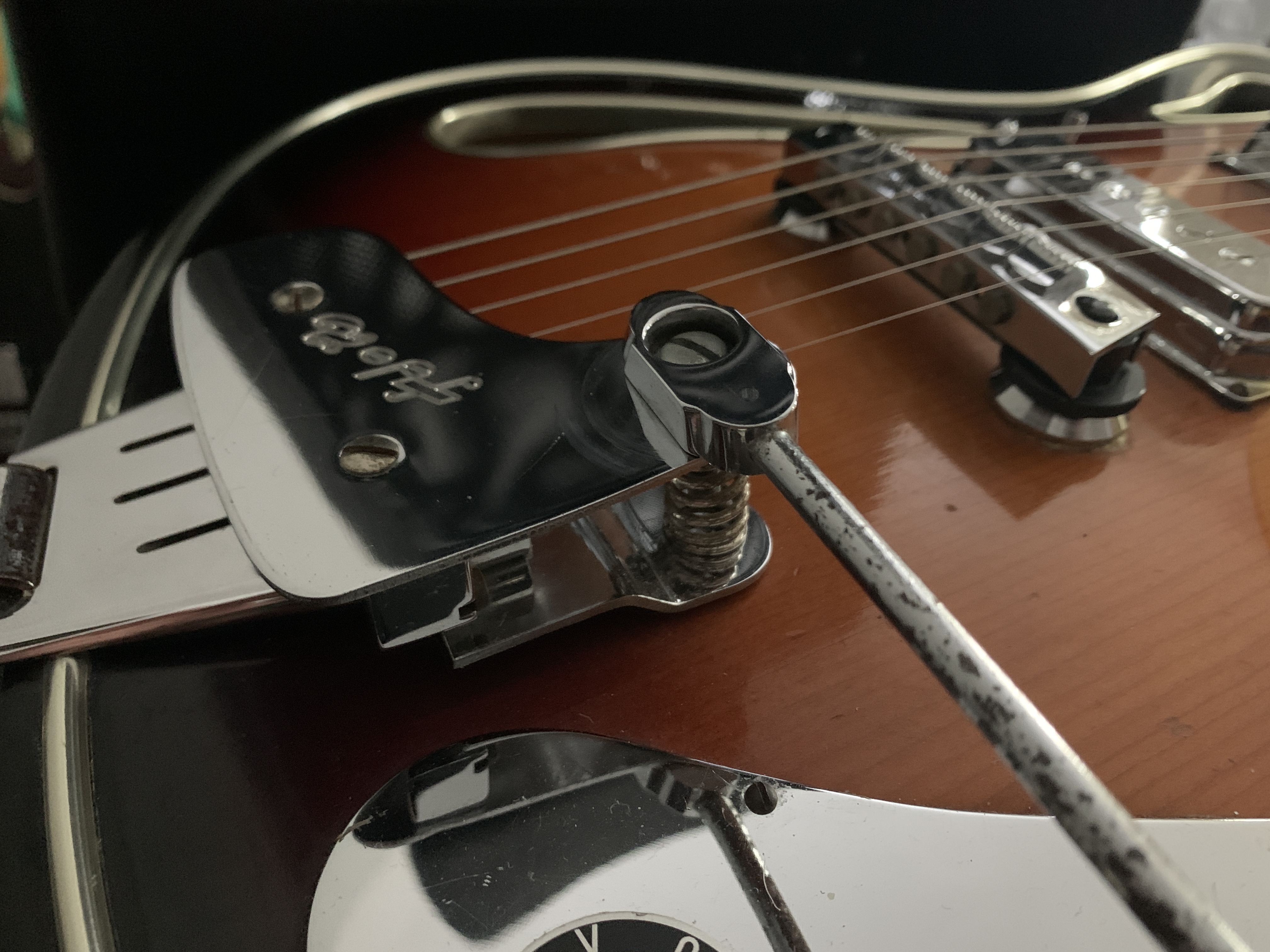 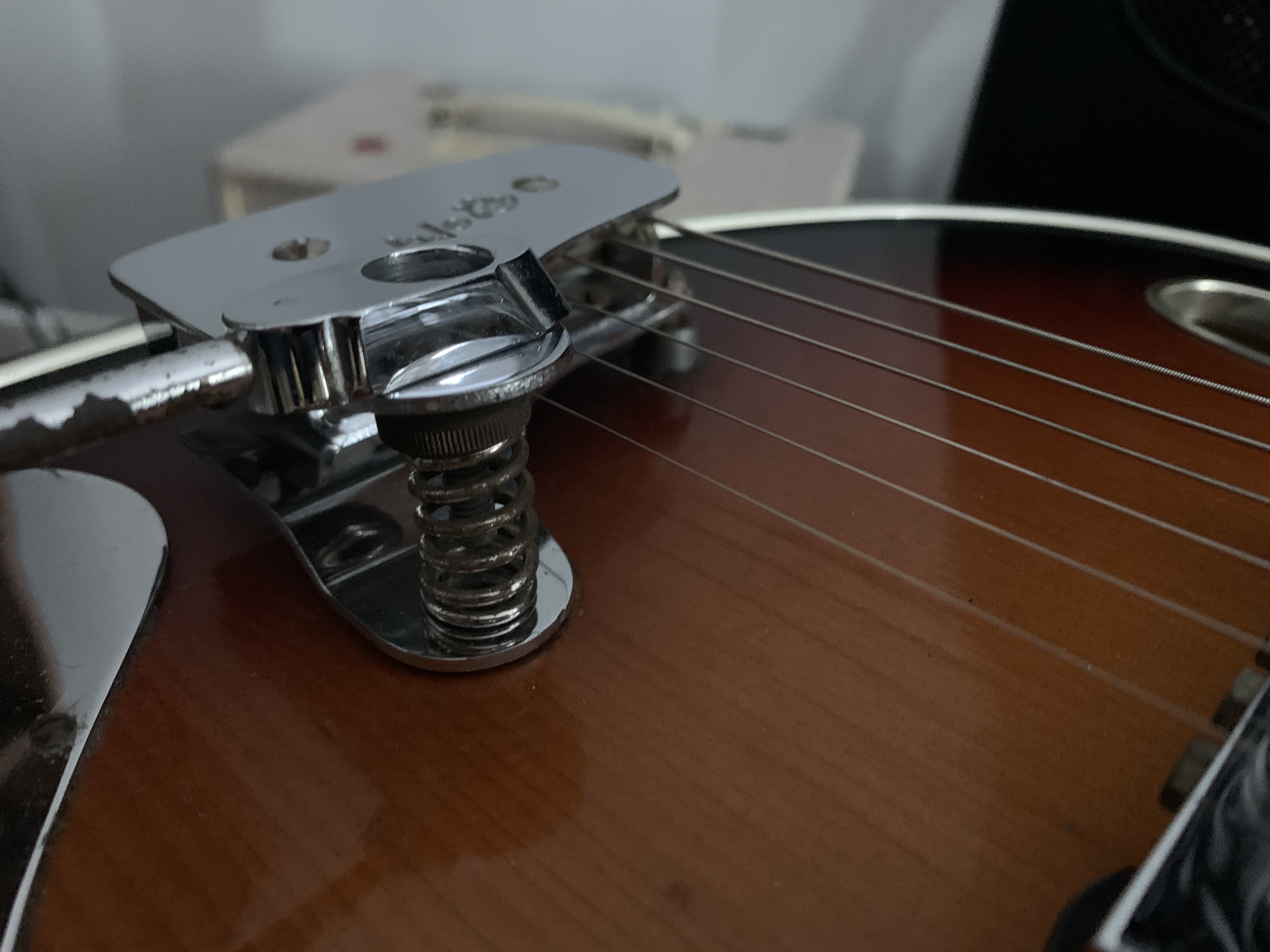 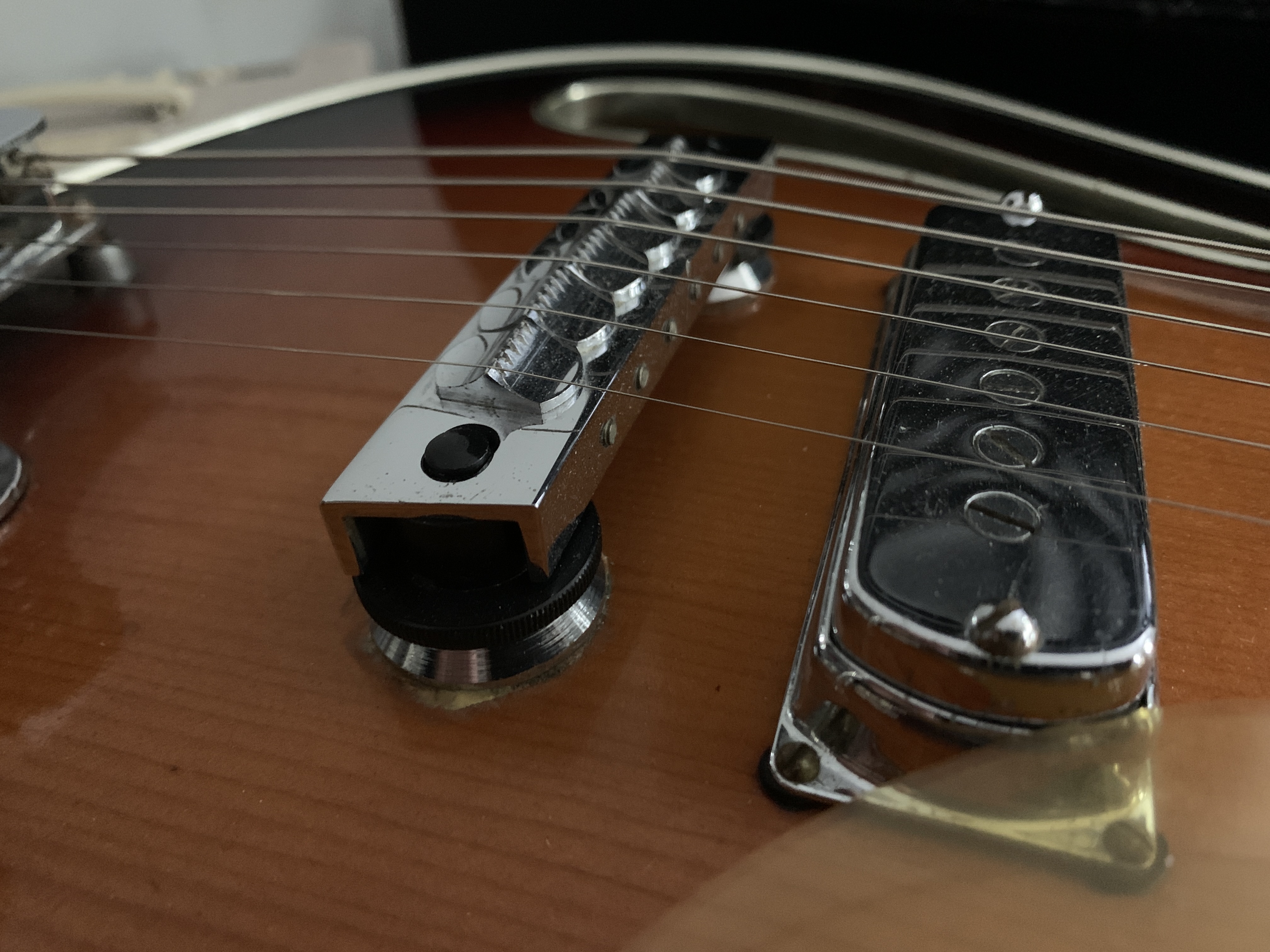 That is beautiful. Congrats!!
Watching the corners turn corners
Top

Love the hardware on that thing, these have to be pretty rare on this side of the pond.
Top

Nice, I've always wanted to play one of these....
This is the guitar in the Cure video for Friday I'm in Love?

Edit ... just checked it is in the Cure vid.... weirdly my daughter is sat next to me wearing my wifes Cure t-shirt she bought when we saw them at the Albert Hall in 2014.
Top

I have a beat to crap Hopf Twisty guitar, I guess a later model with what looks like humbuckers. It is the most Rickenbacker sounding guitar that's not an actual Ricky! 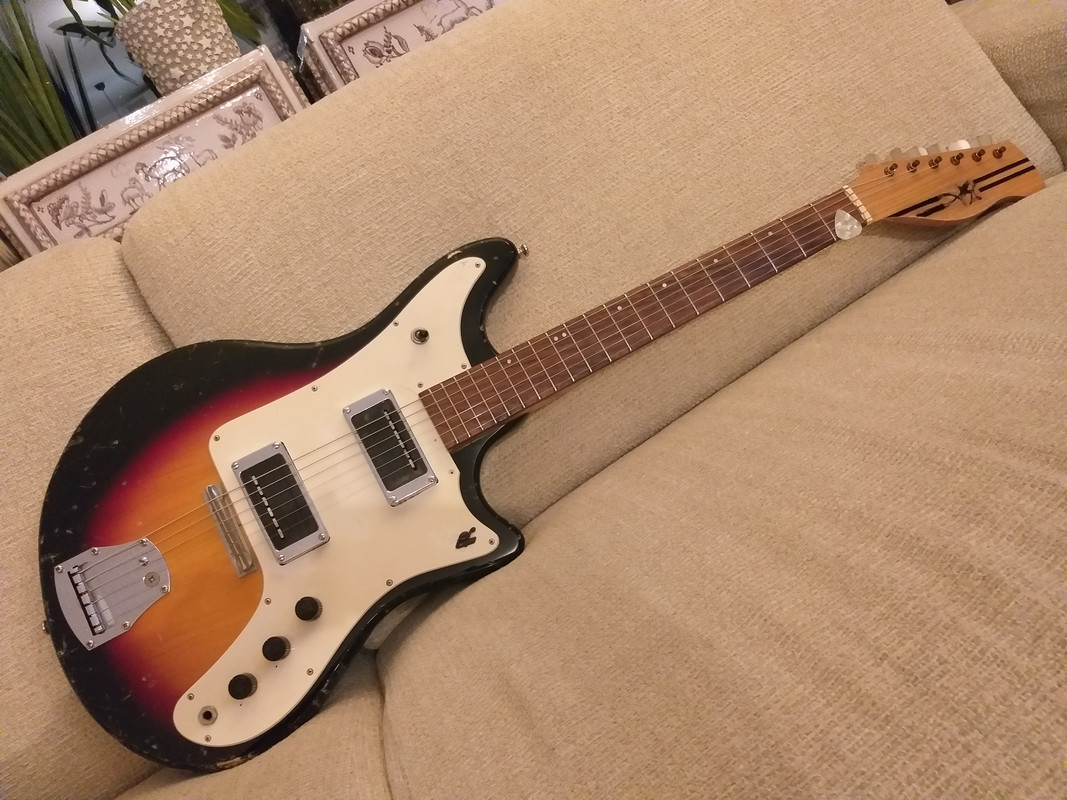 Might have to sell it, though, because of the rather thick neck.

i love delay SO much ...that i procrastinate all the time.
Top
Post Reply
30 posts