Talk about modding or building your own guitar from scratch.
Post Reply
145 posts

That is an epic list. I've always been REALLY interested in the Spaceman stuff, though admittedly, their aesthetics really do it for me.
Pickup Switching Mad Scientist
http://www.offsetguitars.com/forums/viewtopic.php?f=8&t=104282&p=1438384#p1438384
Top 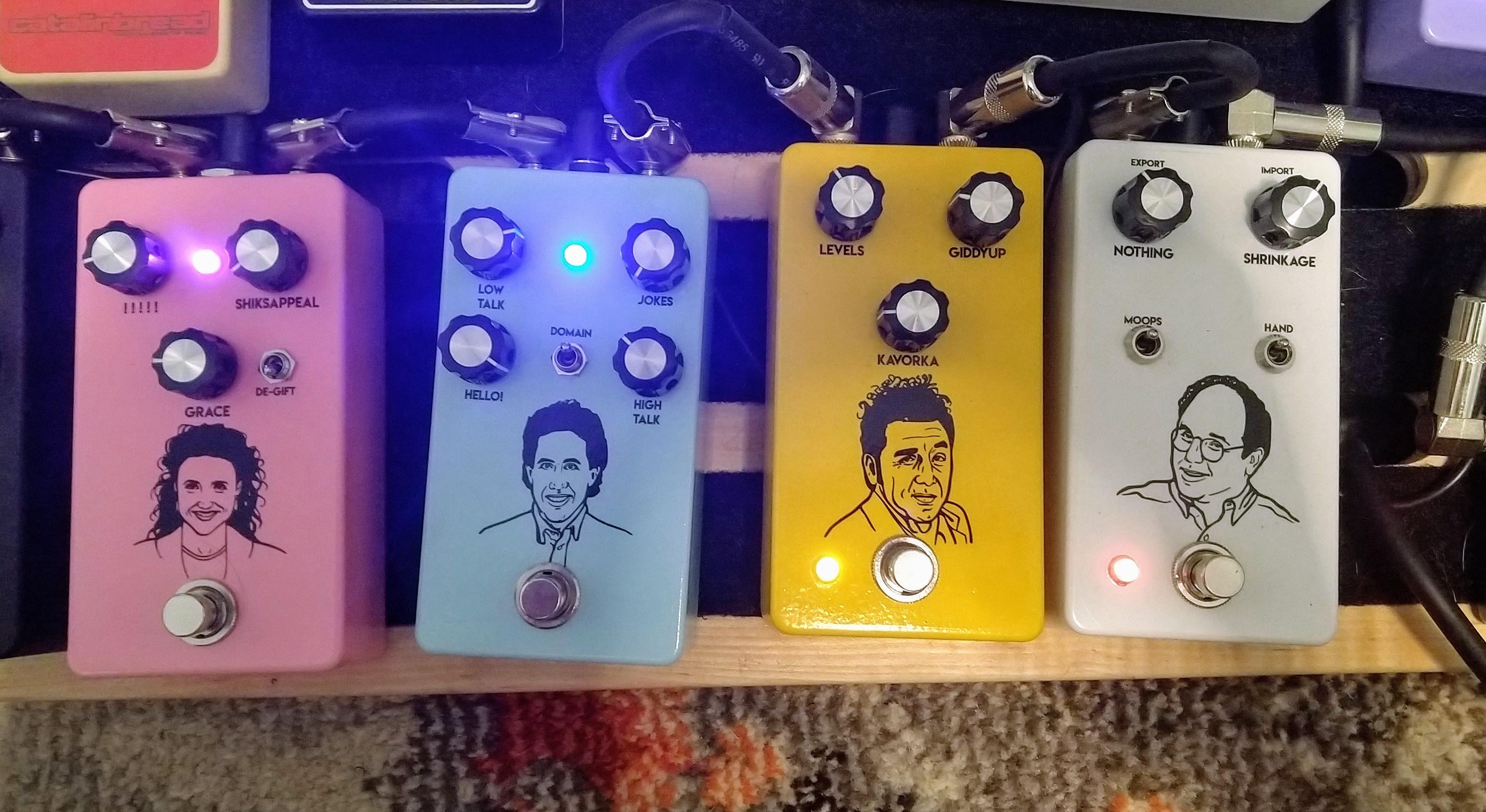 Jerry and Kramer will be getting the most use. Both circuits are really solid overdrives that are right in my wheelhouse. Elaine sounds good, but isn't the type of fuzz that I would use as often as some other builds I have. George will probably spent a lot of time on the shelf as well. I had never used a compressor much before, so I'm not sure how to integrate this in the lineup. I really just wanted to have one around, plus shrinkage = compression was too good to not use.

Also, I finally had a chance to use my flat sled jig to thin down a headstock: 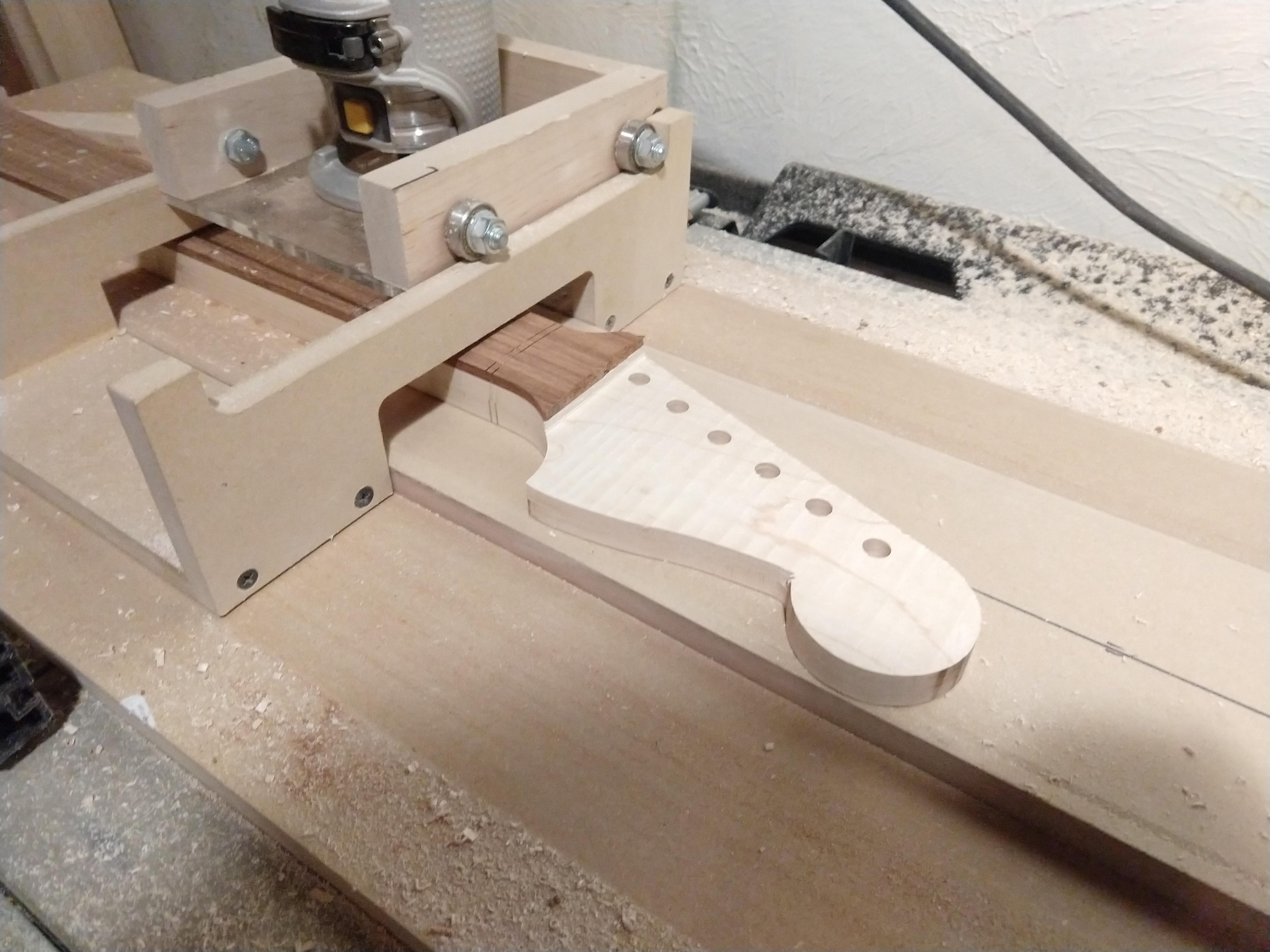 It worked like a charm! Then I just freehanded the transition on my oscillating sanding station. 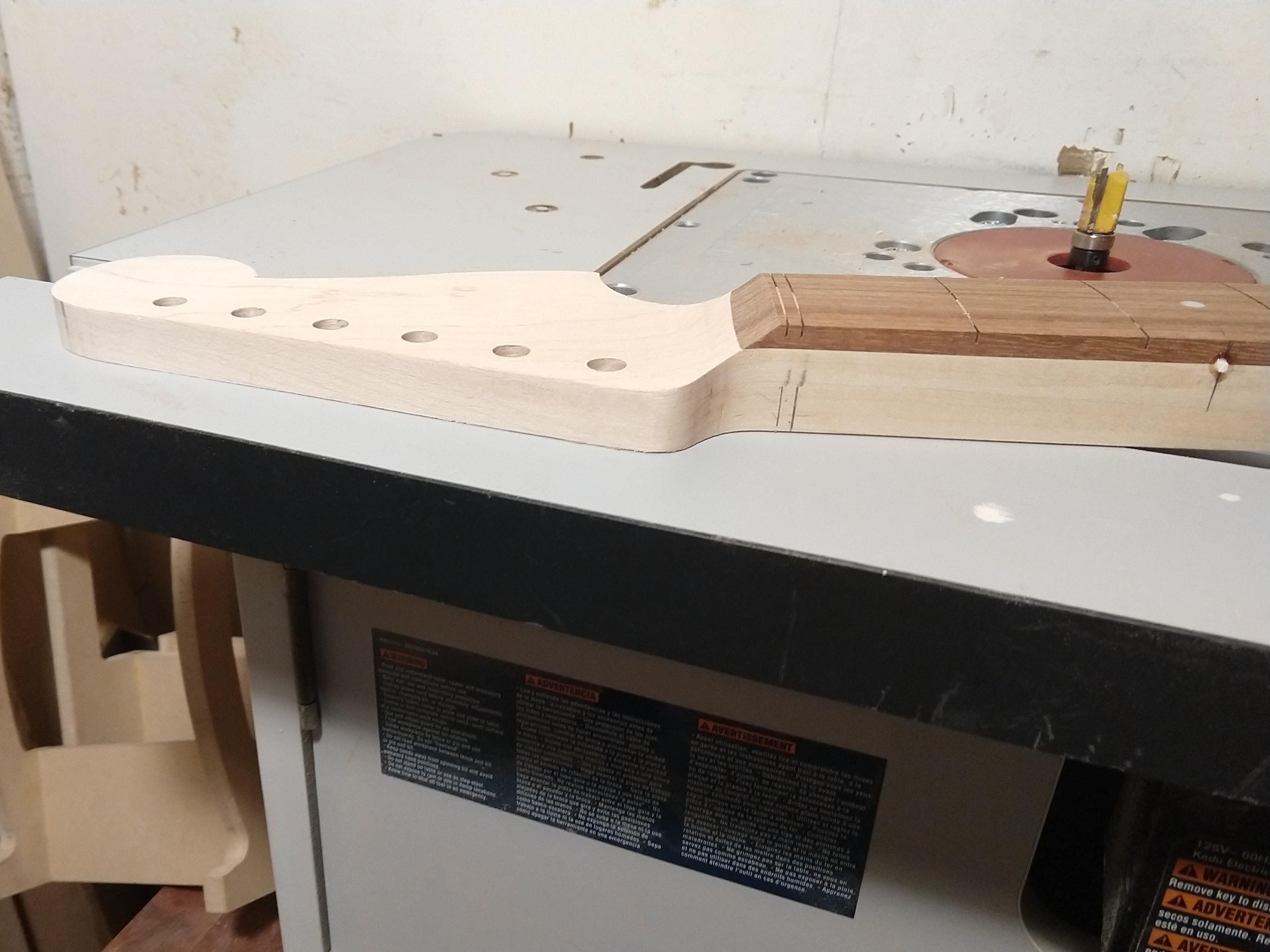 Hey, it looks like a neck! This is the part that really screwed me up last time. All that's left on this one is shaping the back (which i have already done once before) and fretting (which I've done 3-4 times now). This one is just a basic two piece strat type for practice (Granadillo and Maple FYI). Now I'm confident that I can manage to build some passable necks for some upcoming projects like my Aria 1802 and Yamaha SG2 copies and maybe my Sage Green Bronco-Stang.
Top

This thread is BONKERS and I love it. So much cool stuff!
Top

Thank you very much!
Top

I've posted a few in progress pics of the Mustang/Bronco/Jaguar project over on the "What's on Your Workbench" thread. And that one is coming along nicely.

I just finished up this pedal this morning. Presenting the Day Man Fuzz, it uses a Pedalpcb Sunflower board, which is a clone of the Analogman Sun Face, which is a copy of a Fuzz Face. The enclosure features Day Man from one of my favorite TV show - It's Always Sunny in Philadelphia. The enclosure has been ready for months, but it took a while to get my hands on a good pair of transistors. I ended up with some 2N404 from Small Bear. It sounds great and fills a big hole in my fuzz lineup. 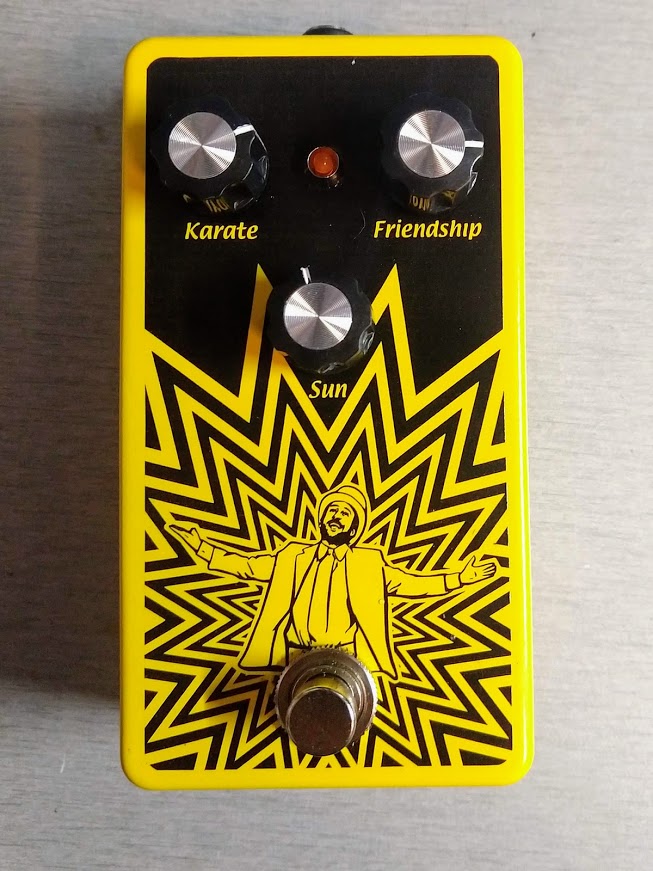 Those Seinfeld pedals are a hoot, especially when you zoom in to read the various labels. Export, Import, etc.

Art Vandelay would be proud.

I was hoping for a "big salad" setting on Elaine's.
Top

"Big Salad" is a fantastic idea that never occurred to me. Perhaps since I'm not thrilled with the circuit in the Elaine, I'll redo her sometime and incorporate "Big Salad". Maybe a chorus? I don't have one of those.
Top

Someone recently contacted me through my etsy shop to get a customized version of my Yamaha SG style double Jaguar pickup covers that I have 3d printed. Anyway, I received this picture from them earlier in the week and I just had to share this awesome guitar with you all. 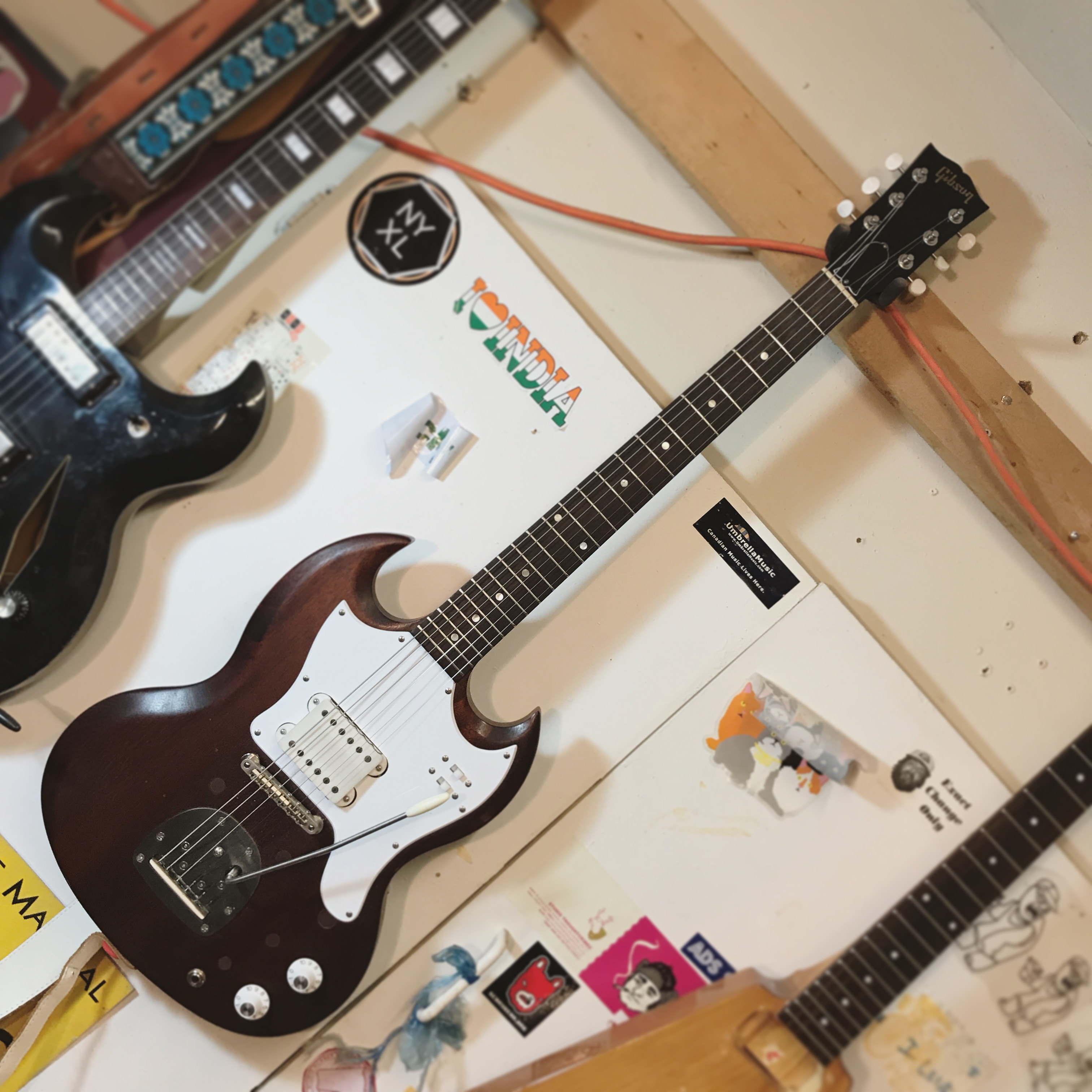 Finished this pedal up the other day. I'm really happy with how it turned out, both in sound and appearance. You should be able to figure out what it is... 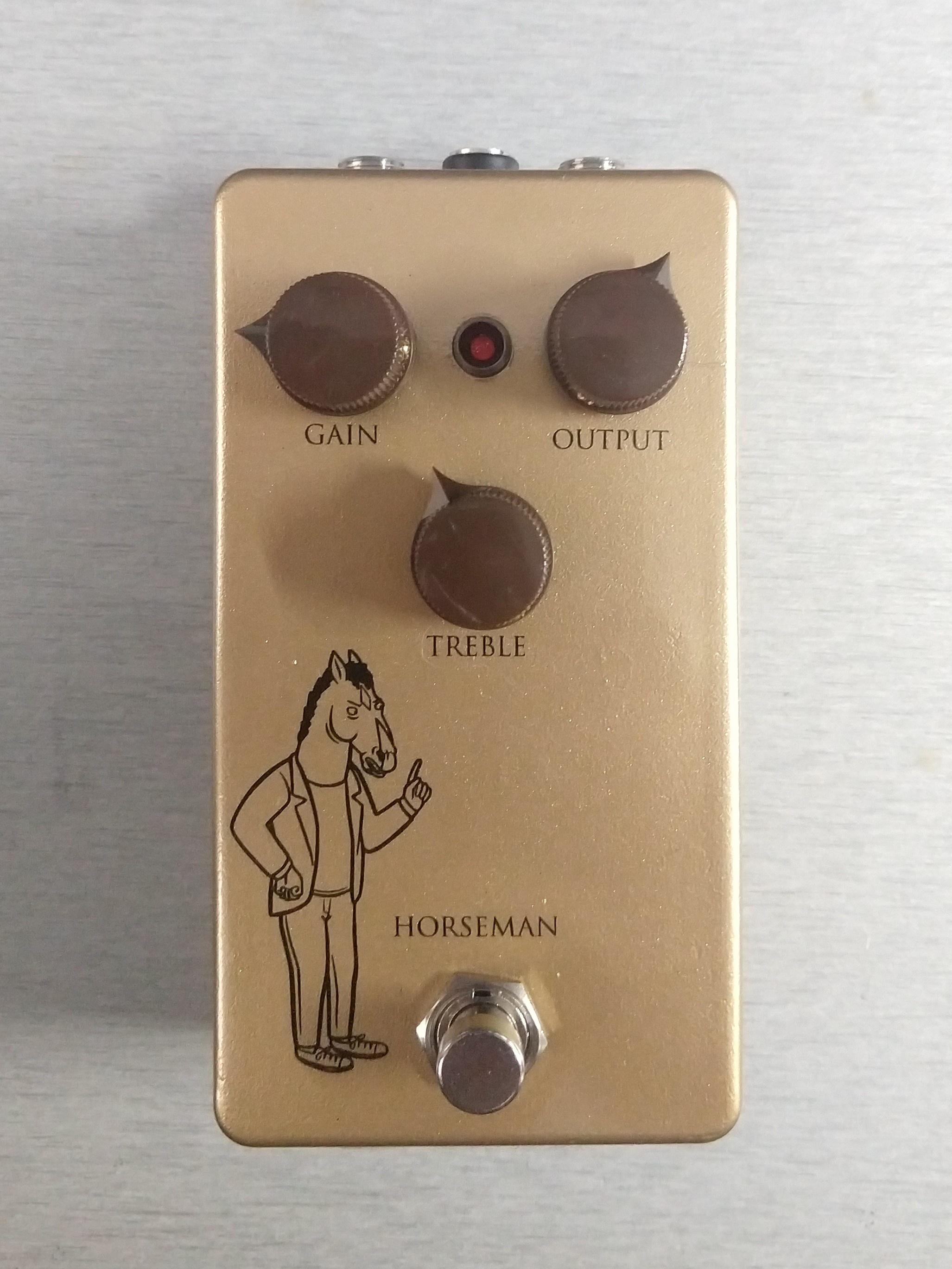 I finished up a bunch of pedals in the last week.

First off, a DOD 440 reissue envelope filter. I actually finished this one a few months back, but I decided to redo the enclosure. I originally used a clearance priced enclosure from Small Bear and the decal just looked like shit on it. I don't know how to describe it other than "shitty". That said, the pedal sounds awesome and I'm much happier with this enclosure. I've wanted an envelope filter for years and I'm loving the sounds coming out of this thing. I am thinking about building another envelope filter that will be more appropriate for bass, like a clone of an MXR.

The artwork is (obviously) stock art of a person wearing a face mask. In my mind the face mask is analogous to a filter. 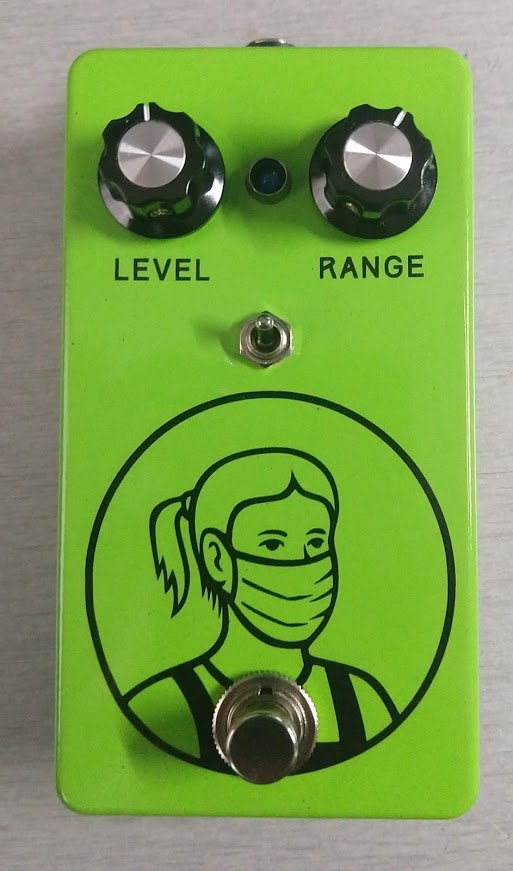 Next is a Spaceman Gemini IV. This one has been a problem child. These pcbs from DeadEndFX seem to be a bit more advanced and I was pushing the limits of my skills here. It was up to me to figure out where the jacks needed to be placed on the enclosure. It took me three enclosures to get things good enough. Also, by the time I worked on this last enclosure, I had switched to a new decal paper which sucks compared to my old paper that I am out of, so it took me a few decals on this enclosure to get it good enough. I also had to wait a few months on a back ordered transformer to arrive from mouser. I socketed the germanium transistors thankfully, because the ones I have now seem to be pretty leaky and too low of gain. The silicon side sounds awesome though, so I'm confident that once I get the right germanium transistors this thing will be awesome.

The artwork is inspired by NASA EVA spacesuits of the Apollo era with their use of color coded ports and uses a font inspired by the later "Worm" logo. 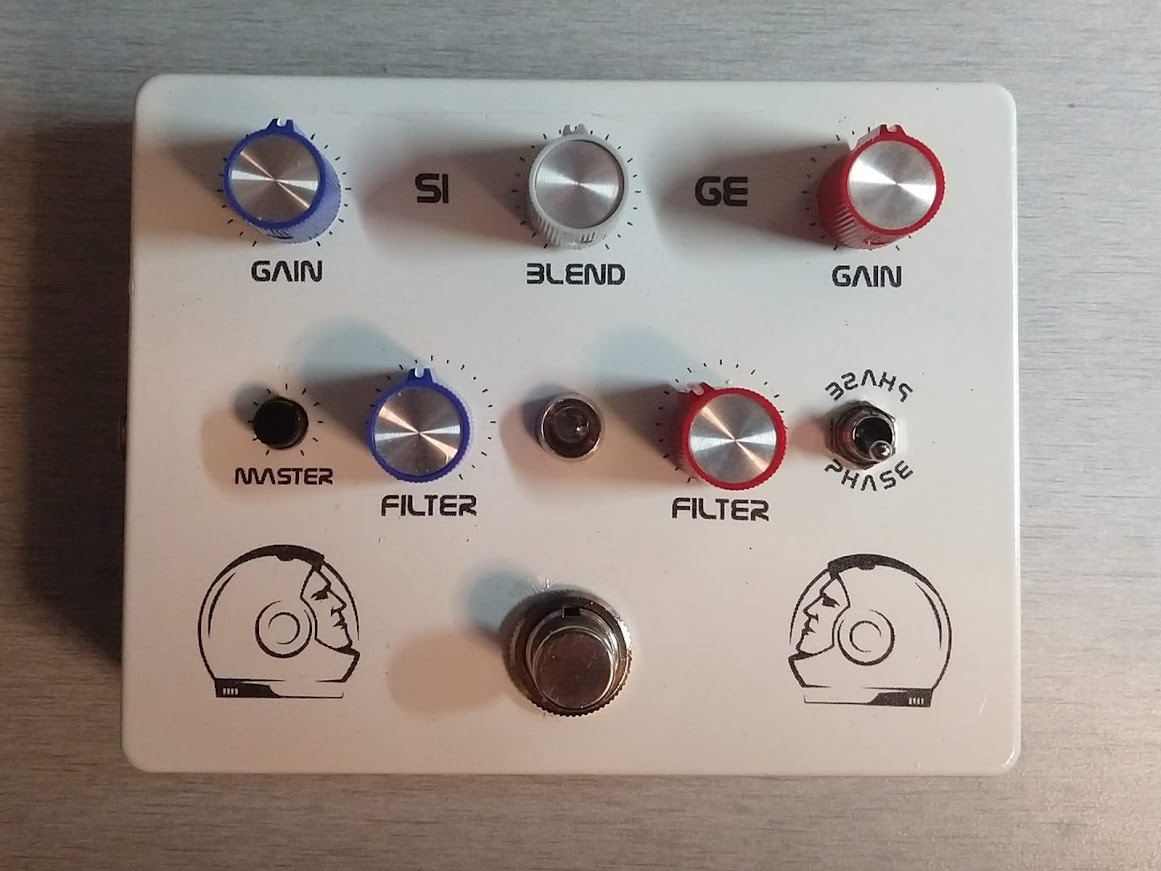 Next an EQD Grand Orbiter. Everything went smooth here. It is full of great sounds. I will have a lot of fun with this.

Artwork is based on planets orbiting around the sun. 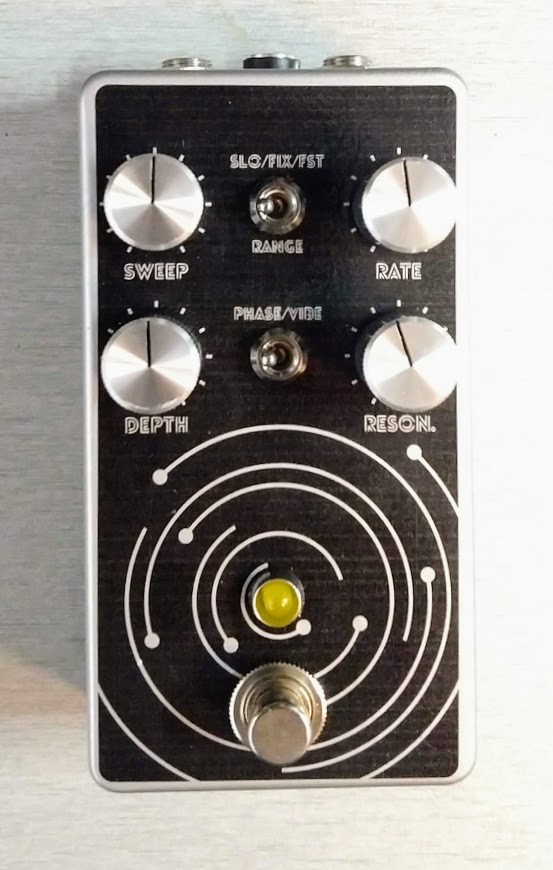 Next, a Univox Superfuzz. This was another one that has been done for a few months, but needed a new enclosure for the same reasons as the envelope filter. Awesome grungy sounds here.

Artwork features Frida Kahlo because my brain decided that Univox = Uni-brow. Also, she was a bad ass. 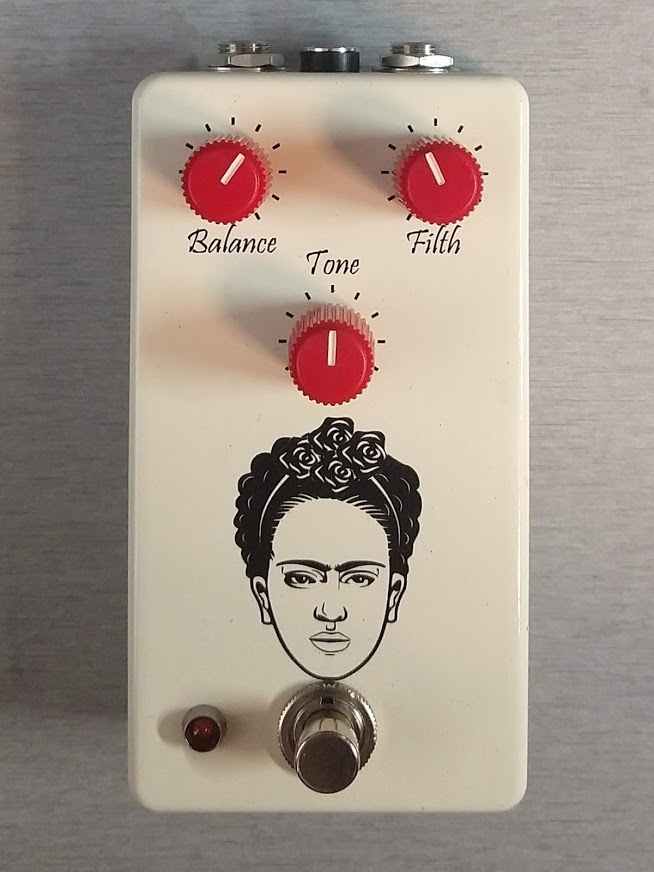 The last one for now is a Keeley Magnetic Echo. It took me a long time to settle on my graphics here. There doesn't seem to be any common imagery for tape echoes that isn't also goofy or cliched. Eventually I decided to base the control area on the panel from a Roland Space Echo and the lower portion is a Morse code inspired pattern that would also look like perforated metal. It sounds great, the grey knobs are modulation controls that add in warbly, chorus like sounds. 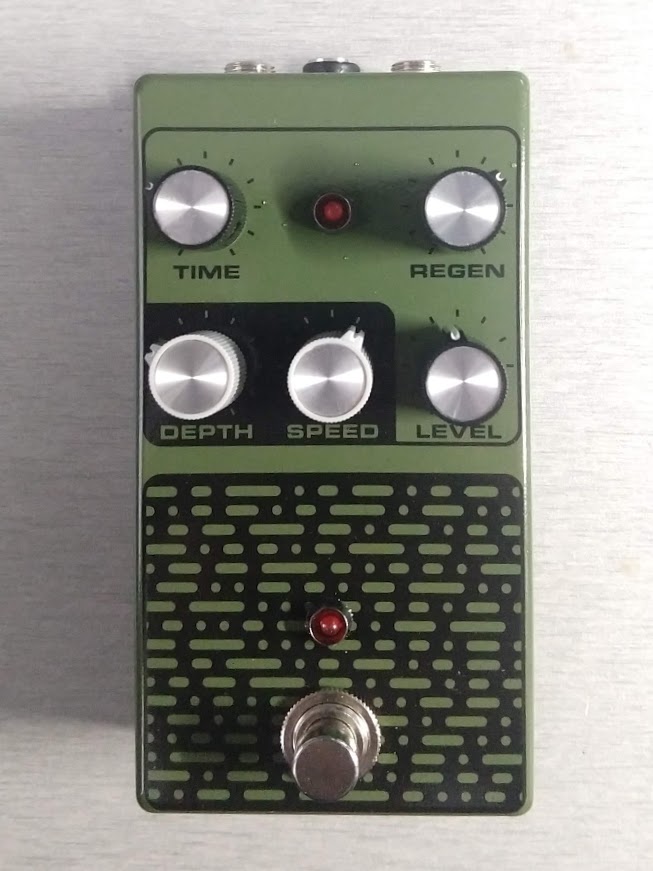 Still on my bench are a Spaceman Orion (which similarly to the Gemini, has taken me a few enclosures to get right - I think I'm almost there though), and a Catalinbread Pareidolia for which I'm waiting on a special chip to arrive from China. I have enclosures ready and components stocked for four more, I just need to order the pcbs and will probably order a few more pcbs while I'm at it. So, coming soon are a 1981 DRV, Fender Pelt, EQD Life, a Hudson Broadcast, and others to be determined.
Top

Those are fantastic!! I love your pedal designs and graphics in particular!!
Pickup Switching Mad Scientist
http://www.offsetguitars.com/forums/viewtopic.php?f=8&t=104282&p=1438384#p1438384
Top

Okay, another one finished up. This is a clone of a Spaceman Orion Spring Reverb. When the Surfybear DIY kits were available, I hemmed and hawed over whether I could pull off building a pedal. Before I decided to try making pedals in earnest, the kits became unavailable. Anyway, I love spring reverb. For years the only effects I used were spring reverb and delay. So, when I found this pcb from DeadEndFX I had to go for it. This one was a bit of a challenge again. Although that was partly my fault as I decided to try adding a few mods on top of dealing with the stacked pcb. The first mod was to put in a switch to select between the onboard mini spring tank and an external full size tank (connected to a pair of RCA jacks). The second mod was a second mix knob and a foot switch to select between the two mix settings along with two leds to indicate which mix knob was selected. Both mods together required (I think) 9 additional holes and lot of extra wire. When I started on enclosure #4 I decided to ditch the second mix knob to make things simpler.

I got everything buttoned up this morning. I put a few dings in the lacquer during assembly, but I'm calling it good enough. There is a bit of static that I need to track down. But it sounds fantastic! This thing drips and surfs like crazy! I don't have a full size spring tank on hand to test that out, but will pick one up soon. Once I fix the issue with the static, I think I can sell my Topanga reverb.

For the graphics I wanted to mix some elements of classic fender amps, like the large aqua text from silver face amps, silver text on black background, amp jewel, and cupcake knobs. 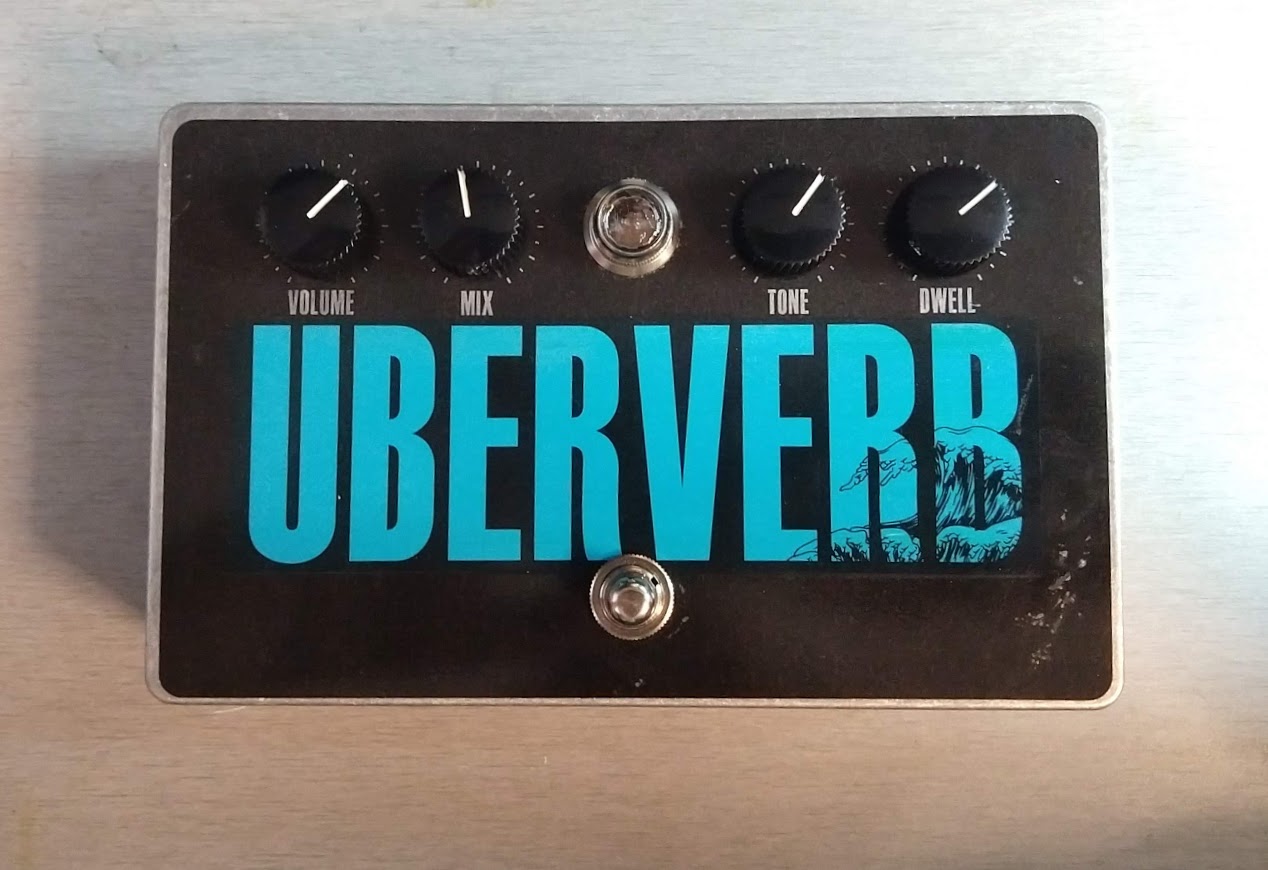 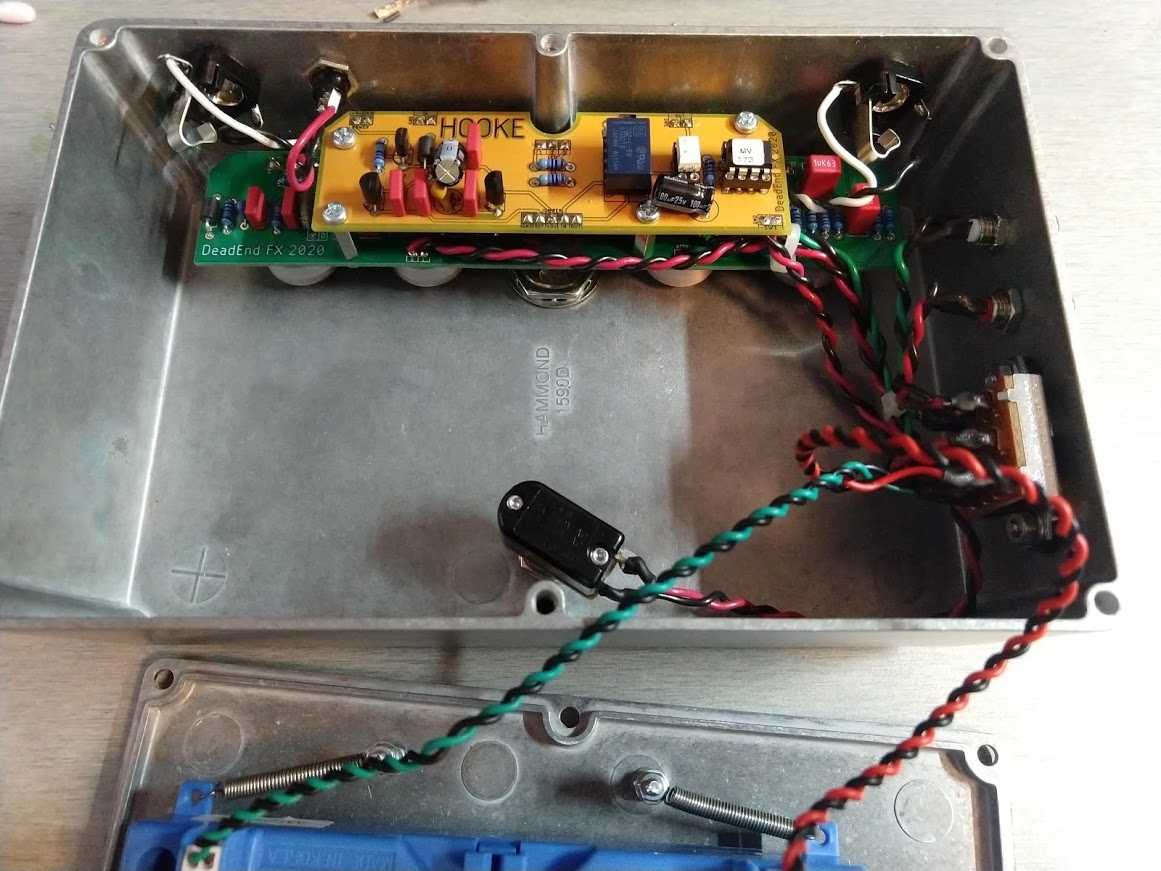 Real spring tank suspended on springs. Give it a whack and you hear that real spring crash. 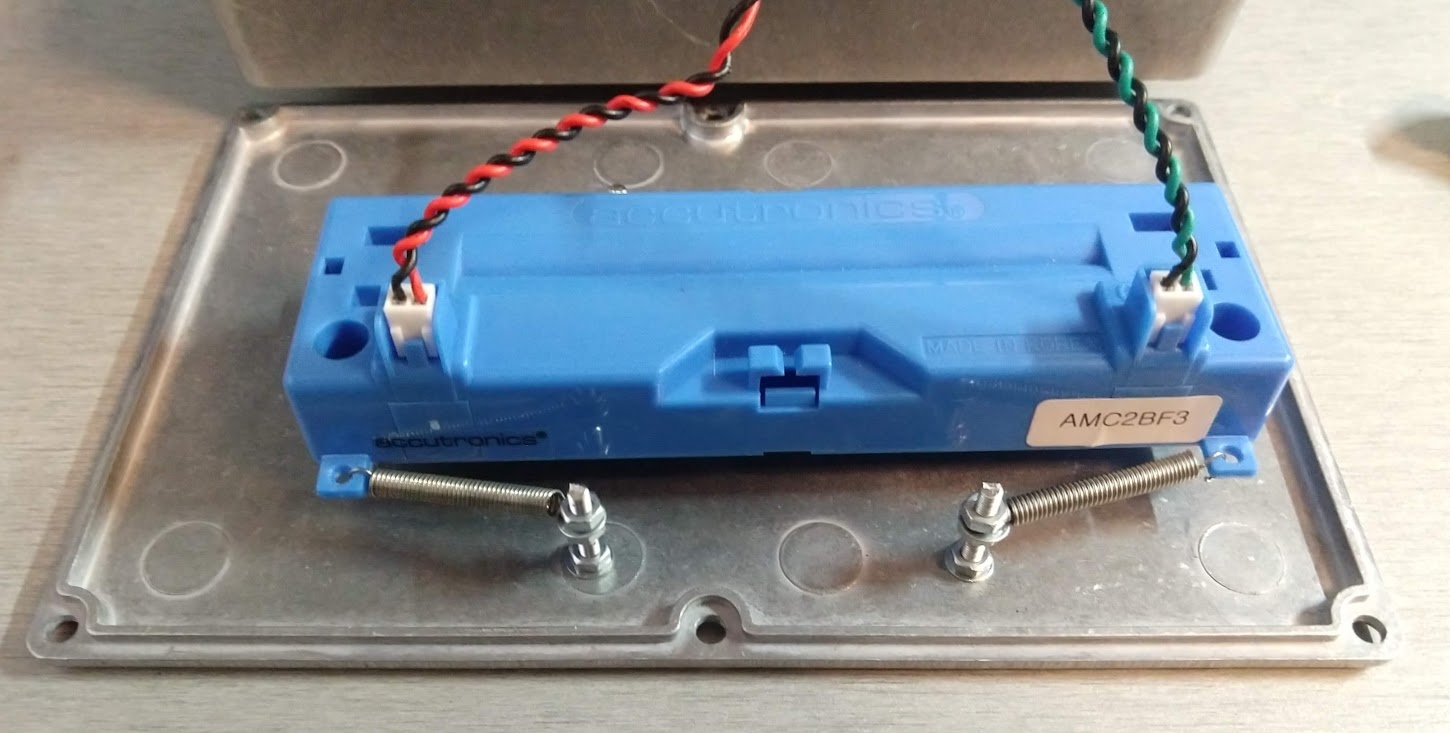 Real spring tank in a small pedal!! That's epic!! You should post a sound sample