After months of waiting I finally brought this guy home: 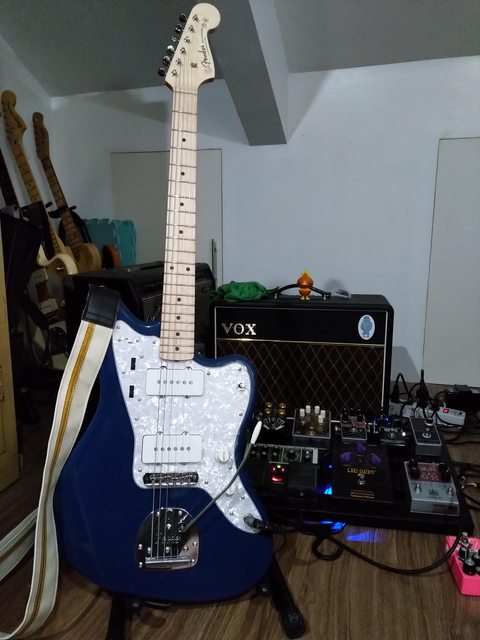 I've only had it for about a week so I'm still very likely in the honeymoon period, but this is the nicest guitar I've had thus far (my other guitars are a Squier Tele, a JMJM, and a partsmaster). I don't know if it's the correct trem spacing or the alder body, but something about this guitar just resonates and sings like none of my others do. I thought I wouldn't like the medium jumbo frets but the jumbos on my other guitar now feel clumsy by comparison. The neck is a bit thinner (about 1mm less than the JMJM at the 1st fret) and a bit deeper, I've seen it described as a U profile in some sites. Fits the hand like a glove while being very easy to wrap your hand around, and the satin finish is wonderful (a bit hard to compare with the JMJM cause mine has shined out a bit over the years). And yes, the neck is almost completely bone white. The color is kind of hard to take a picture of: in some lights it's almost black and in some lights it's very very blue.

This is the first of the MIJ Hybrid series, which seems to be Fender Japan's response to hearing all the trash we've been talking about them and addressing some issues -- the pots are full-sized CTS, the switch is solid, the tuners are Gotoh vintage-style locking, and *drum roll* all the Jazzmasters in the line have MIA Pickups.

Now, which US Pickups entirely are an interesting questions. The newer Jazzmasters in the line claim PV65 pickups, but you might notice when looking this guitar up that it just says "US Jazzmaster Single Coil Pickups". I heard here and there on the forum that they had V-Mods in these, which would have been ridiculous IMO (going from strat-like MIJ Jazzmaster pickups to... strat-like MIA Jazzmaster Pickups) but I couldn't really find a source for that info other than hearsay, so naturally I had to check when I changed the strings: 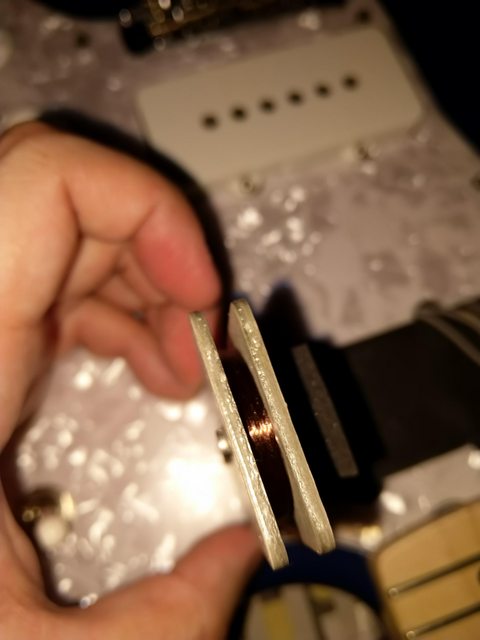 They don't look like V-Mods to me... I know it's a terrible pic but it's a grey bobbin and the coils seem plenty flat and wide -- or at least much flatter and wider than the pictures of V-Mods I've seen. Anyone have any idea what these are? They sound just a bit more mellow and bassy than my JMJM, but of course it could be a wide variety of factors that spell the difference.

Lastly I just want to commend the setup at Swee Lee Singapore. This came shipped, and I've heard tons of horror stories of guitar stores who had no idea how to set up a Jazzmaster, but it actually arrived out of the box with nary a rattle, and the trem was actually set up to lock! The only issue I had was that the pickups were set too high which made the whole thing sound a bit honky and middy and didn't help assuage my pickup fears, but a small screwdriver and a bit of patience later and they've got everything I want out of Jazzmaster pickups.
Top

Nice score, that's a great guitar. Interesting about the pickups, I grabbed one when they were first introduced and it definitely didn't have the same pickups you've got.
All pain and troubles melted away like lemon drops beyond the contrails across the sky.
Top

tammyw wrote: ↑
Sun Sep 08, 2019 4:11 am
Nice score, that's a great guitar. Interesting about the pickups, I grabbed one when they were first introduced and it definitely didn't have the same pickups you've got.

Oh, that's interesting. Mine seems to have been made in 2019 judging by the serial so I guess they changed it at some point?
Top

You're right, I quickly realized I'm an idiot and just forgot the color of the pickups I installed in my other Jazzmaster a couple of years ago

So I guess when they came out with the new Hybrid Jazzmasters, they went back and changed the pickups on these to match. Might be good to know the build date if anyone out there's interested in one.
Top

Awesome score. This was one of the first offsets I started GASing for at the beginning of my search for one. Thanks for the details.
Top

Very nice. I'm personally partial to the Sherwood Green Jaguar with black pickguard that's part of the MIJ hybrids. Are these guitars supposed to come to North America or are they only for import?
Top

David T wrote: ↑
Mon Sep 09, 2019 4:10 pm
Very nice. I'm personally partial to the Sherwood Green Jaguar with black pickguard that's part of the MIJ hybrids. Are these guitars supposed to come to North America or are they only for import?

I have a feeling there's something blocking them from being sold in the US -- I've seen the Hybrids for sale online on European retailers but never American. Since there *are* some Japanese models for sale in the US I assume there are agreements on what they can and can't sell.

Incidentally I couldn't have this shipped directly to my country because of distribution deals despite the guitar not being available here; I had to actually fly to a different country to pick it up.
Top

I’m going to be getting this for my birthday and I can’t find any videos featuring this guitar. Is there any current Fender guitar that this sounds like?
Top

CreamyCrumpets83 wrote: ↑
Sat Jun 20, 2020 7:51 am
I’m going to be getting this for my birthday and I can’t find any videos featuring this guitar. Is there any current Fender guitar that this sounds like?

It seems they started out with V-Mods for pickups, and then changed to PV65s at some point, so it'll probably sound like an American Pro or an AV65 depending on when it was made.

What does the term "hybrid" refer to anyway?

Sweet guitars no doubt, but that terminology confuses me.
- Mitch
Top

I’ve noticed that it has the vintage style bridge and I’ve heard that the strings pop out of the saddles fairly easily, has that been a problem for you? I’m a fairly heavy handed player. And, what does the neck feel like? I really like putting my thumb over the fretboard, John Fruciante style. is it easy to do that on this guitar or does it come with some difficulty? The only guitar I’ve had is my Gretsch Streamliner which claims to have a ‘u shape’ neck but it is fairly comfortable for me to put my thumb over the fretboard.
Top

Sweet guitars no doubt, but that terminology confuses me.

Maybe it is because they use US and Japanese parts. Maybe the maple fretboard and radius. Not sure, either.
Det er mig der holder traeerne sammen.
Top

Sweet guitars no doubt, but that terminology confuses me.

Hybrid means its a fusion of old and new specs - so for example despite being a many ways a tradiational jazzmaster, it has medium jumbo frets instead of vintage, and probably a 9.5" radius instead of 7.25". (so same idea as the Vintera modified, although not necessarily with exactly the same modifications)

The other range released at the same time was "Traditional"
Last edited by gusgorman on Sun Jul 12, 2020 8:21 am, edited 1 time in total.
Top

That's a lovely looking guitar mate. I see these pop up on Reverb from time to time. I might be wrong but I don't see a lot of Japenese Fenders for sale first hand here in the UK. Tends to be US, Mexican and Chinese/Indonesian Squiers. I do love seeing offsets with maple fretboards. My first Fender was a Mexican Standard Tele with a one piece maple neck and I loved how it felt and looked. I've become an offset fan since then and you don't see a lot of maple fretboards on those (I assume due to the era they were released when Fender was going through a rosewood phase - I know the very early JMs had maple fretboards). Anyway, congratulations on the NGD.
Top
Post Reply
25 posts